Hilarious Newspaper Ad Placed By Man Looking For Wife In 1865 Is Going Viral. 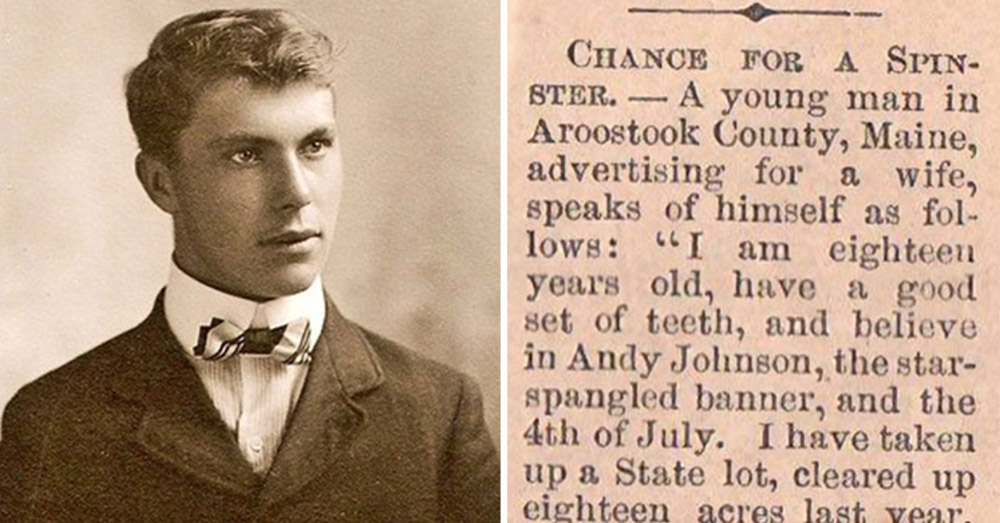 If you think online dating is a hard gig, try finding a significant other in 1865.

Somehow, someway, this ‘wife wanted’ ad, found in a newspaper from the 19th century, was passed down until a photocopy made its way onto the world wide web. In many ways, the 1800’s were a simpler time – and a hardworking man with a ‘good set of teeth’ was a man most women would swoon for.

The 18-year-old suitor from Aroostook County, Maine, wanted a woman to dote on… but he needed to find her first.

Here is the endearing transcript in full:

I am eighteen years old, have a good set of teeth, and believe in Andy Johnson, the Star-Spangled Banner, and the 4th of July. I have taken up a State lot, cleared up eighteen acres last year, and seeded ten of it down.

My buckwheat looks first rate, and the oats and potatoes are bully. I have got nine sheep, a two year old bull, and two heifers, besides a house and a barn.

I want to get married. I want to buy bread and butter, hoop skirts, and waterfalls for some person of the female persuasion during life. That’s what’s the matter with me. But I don’t know how to do it.

We’ll never know if this young man found the love of his life, but we have to applaud his effort… and at the very least his buckwheat.