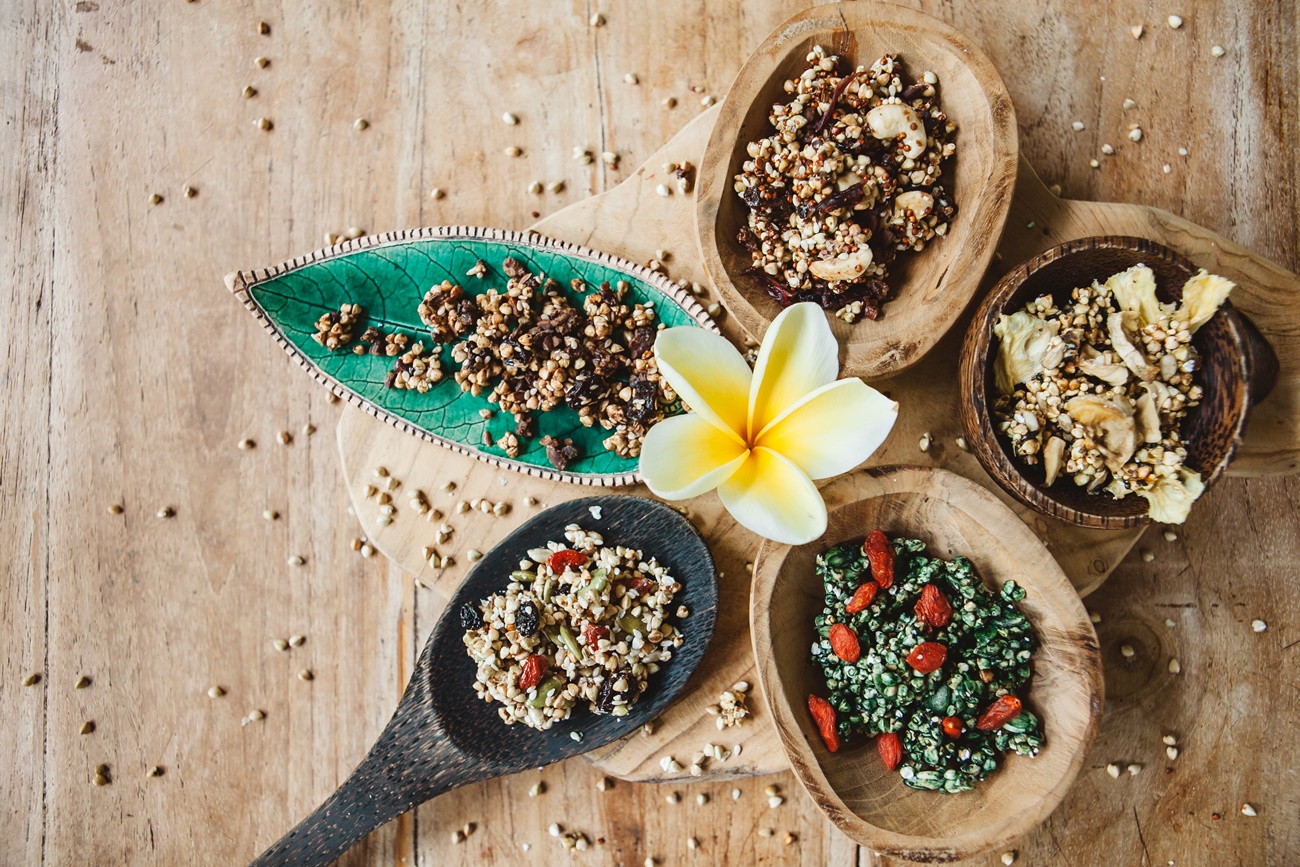 The names of some diets share clues as to what the diet is about… the “low carb diet” is – duh – about eating fewer carbs. The name “paleo diet” tells us this diet is somehow related to ancient times. The “whole 30” name hints that whole foods might be involved. Remember the “grapefruit diet”? These diet names tell us a little about what we would be getting into if we joined. But what the heck is the “Yoga Diet”?

What is the Yoga Diet? 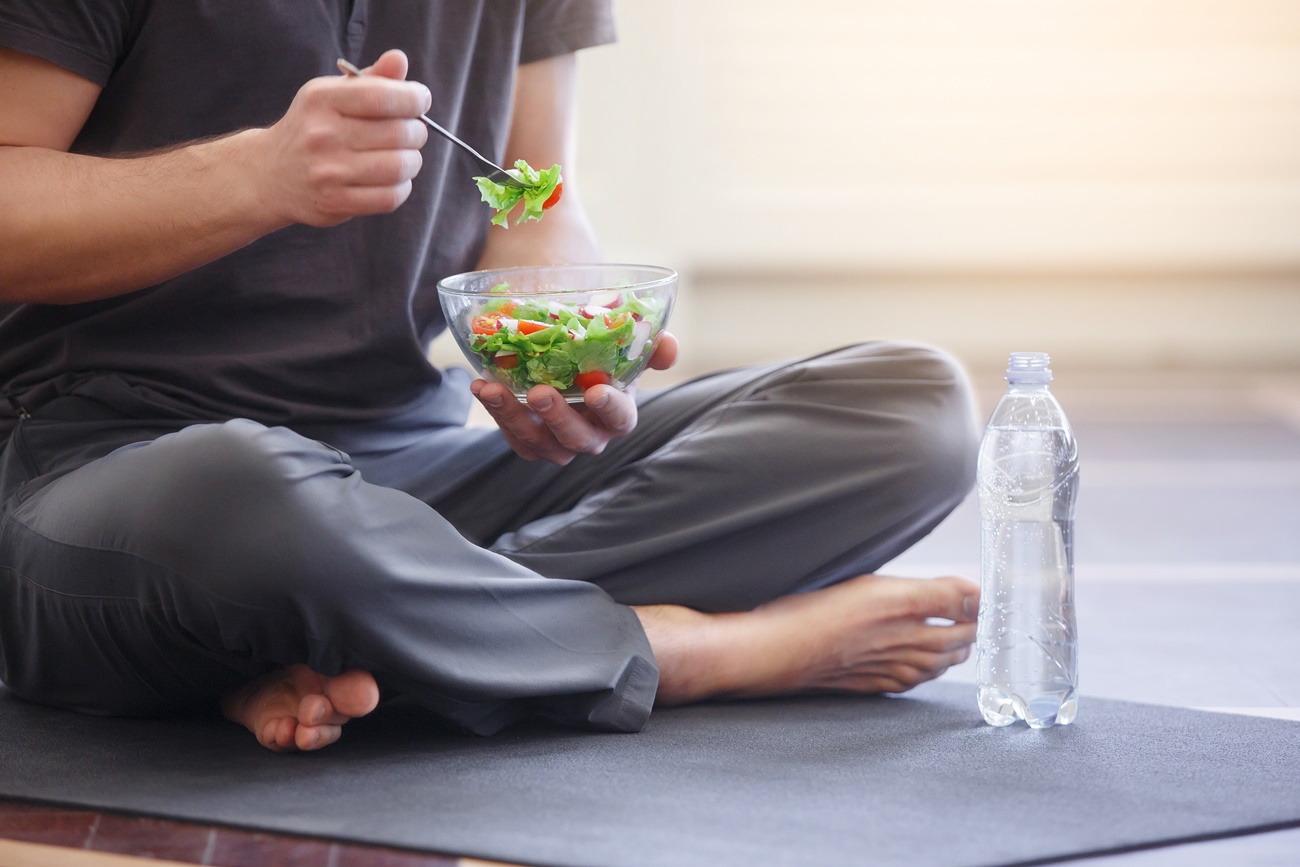 Also called the Yogic Diet, this way of eating is based on the components of yoga philosophy (AKA “Ayurvedic” philosophy). It is based on nourishing the body and being in a positive and peaceful head space with food. This philosophy describes three things being present in all things, just in varying amounts: Raja, Tama, and Sattva. “Raja” is used to describe spicy, hot and fast. Foods with high Raja are spicy, bitter, salty or dry. “Tama” is used to describe bland and slow, and foods higher in this are fermented, overripe, meat, bland foods, and garlic. “Sattva” describes harmonious and pure qualities. Strict yoga diets focus on foods that are more Sattvic than Rajasic or Tamasic. The belief is that eating this way leads to true health, a healthy mind and body, with a flow of positive energy between them.

Some say that the Yoga Diet is unique in this way: unlike other diets where, other than somewhat individualized calorie or “point” (weight watchers) amounts, a feature of this diet is is that it will feel different and be different for every person. If you have done yoga, you know that those practicing yoga are encouraged to adapt the poses as needed to make it personally meaningful. Yoga instructors regularly remind yogis to avoid comparing to their neighbors, and apparently this is also a feature of the Yoga Diet – avoid comparing to how others are adapting the principles and do what feels right to you.

What foods are allowed and which foods are forbidden? 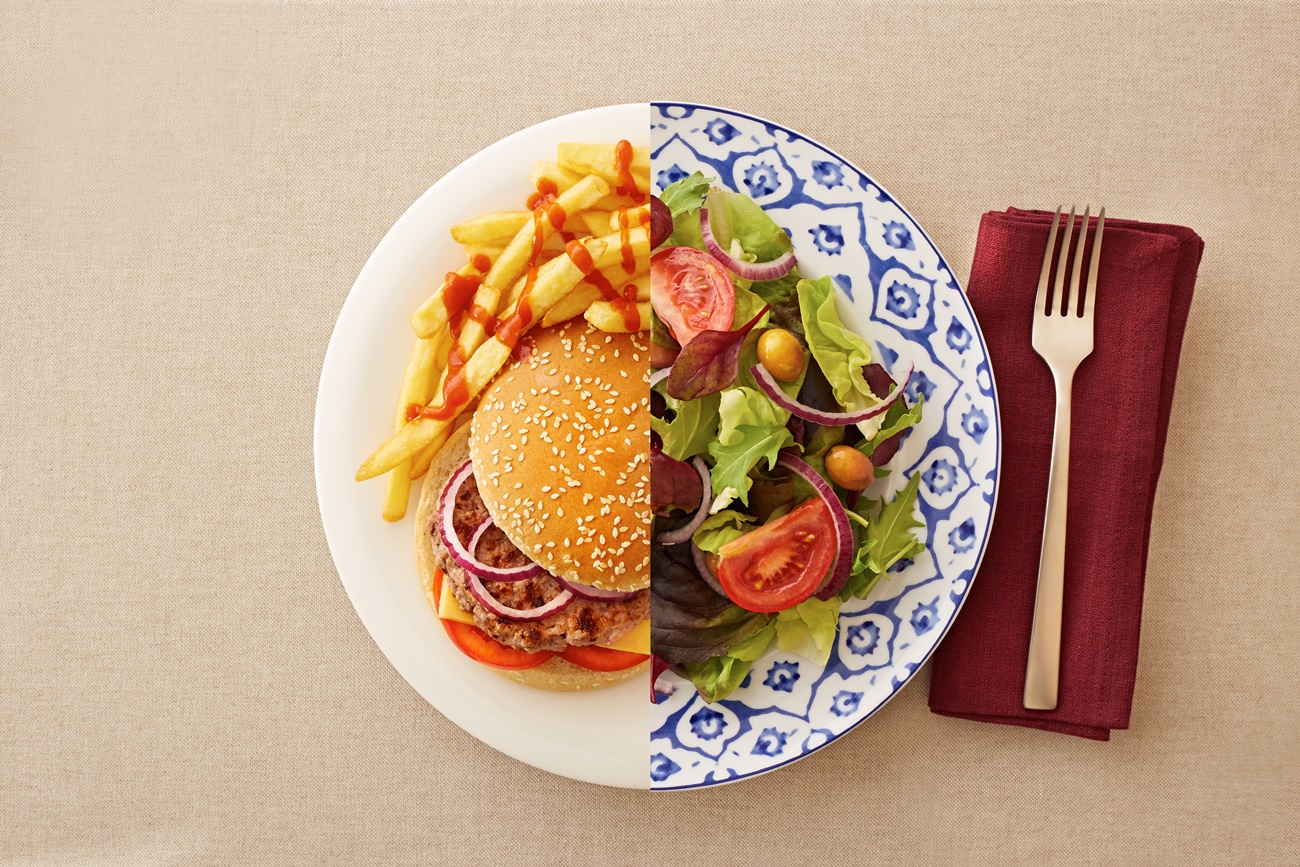 The Yoga Diet is a type of vegetarian diet, therefore meat is discouraged. This comes from one of the yamas (components) of yoga, ahimsa which means “non-harming”. Harming of animals is avoided, so meat is not allowed. However, the non-harming aspect here also extends to humans, so if someone considers it “harming” to avoid meat because without it they are missing vital nutrients, it would be inline with the Yoga Diet to go ahead and include animal proteins. This an example of the fluidity and flexibility that comes with the Yoga Diet and separates it from other diets which tend to be much more black and white.

Those following the Yoga Diet more strictly also insist on only eating organic produce. This is based on the idea that food ought to be grown naturally and harmoniously with nature.

Ghee (clarified butter, with the milk and water removed from butter leaving only the butter fat) is highly valued in the Yoga Diet, with claims to improve digestion and inflammation.

Chemicals and stimulants are strongly discouraged, so caffeine, tobacco, and artificial sweeteners are all no-nos. Alcohol is also discouraged. The idea with these off-limit items is that they are unhealthy for one’s body and mind, especially the mind’s ability to concentrate.

Craving a downward hot dog? Think again. Fresh, unprocessed foods are also not part of the Yoga Diet. So frozen, boxed, and canned foods are not used. Leftovers are even frowned upon by some yogi dieters.

Some sources say that timing is also a feature of the Yoga Diet, with an emphasis on eating away from exercise or sleep by two hours. Yogis following this principle site the body’s need for digestive rest before engaging in movement or rest. A more drastic yoga practice that some incorporate is fasting for an entire day. The idea here is that yoga as that the mental clarity (supposedly) achieved with fasting brings balance to one’s mental and physical experience of yoga.

Why is it called the Yoga Diet? 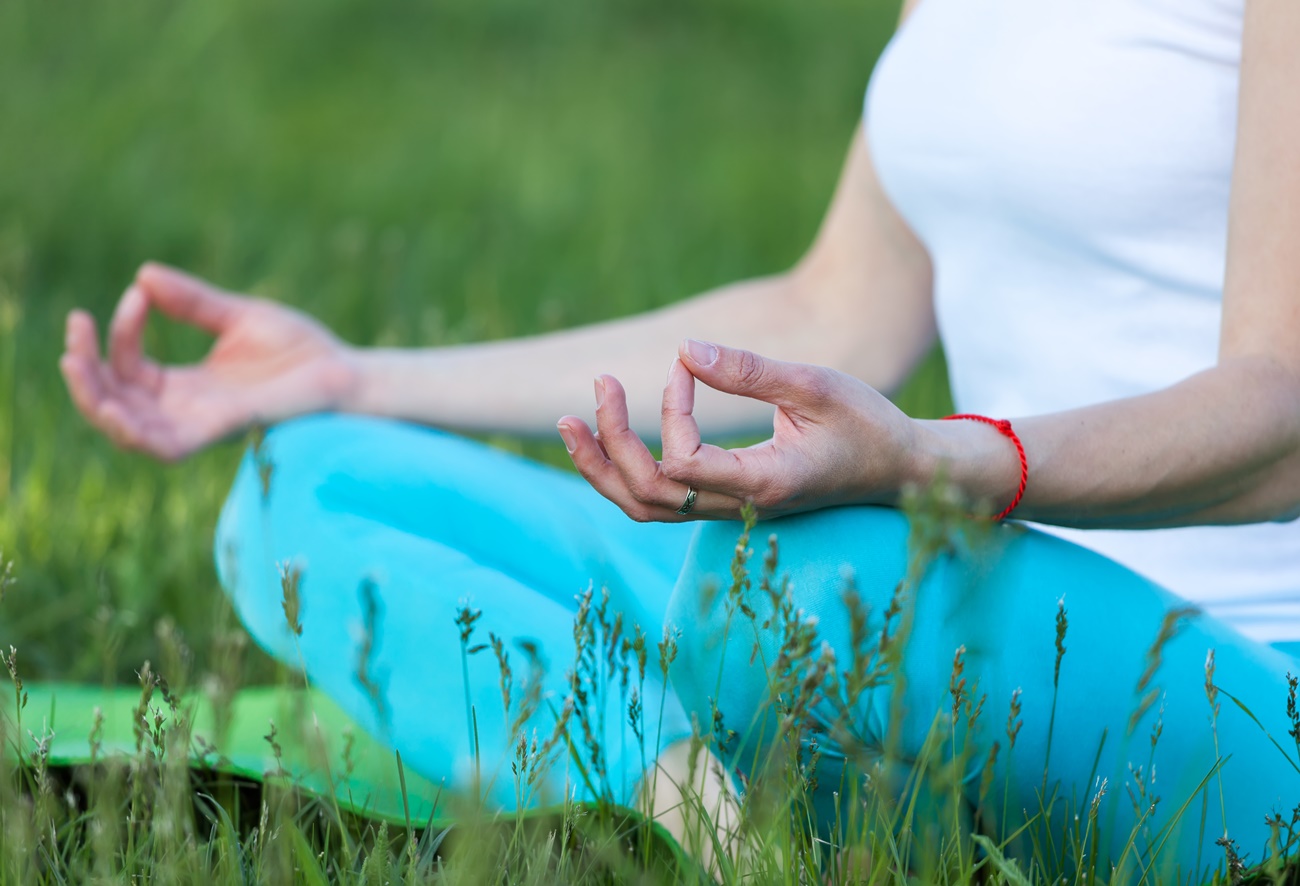 While some of the yoga diet concepts are pretty universal and things we have heard before (e.g. focus on whole grains, fresh produce, nuts and seeds), some of the ideas are very yoga specific using yogi language (Ayurvedic, Raja, Tama, and Sattva).

Is it a weight loss plan?

The answer to this depends on where you look. Some sources claim the diet is more of a lifestyle aimed at improving health, separate from weight. Other sources claim that the yoga diet will help you shed pounds.

The “non-harm” or ahimsa piece of yoga can be applied in various ways, not just by avoiding animal products. The ahimsa also encompasses the earth, environmental awareness, and striving to avoid harming nature.

Yoga Diet concepts you can ditch 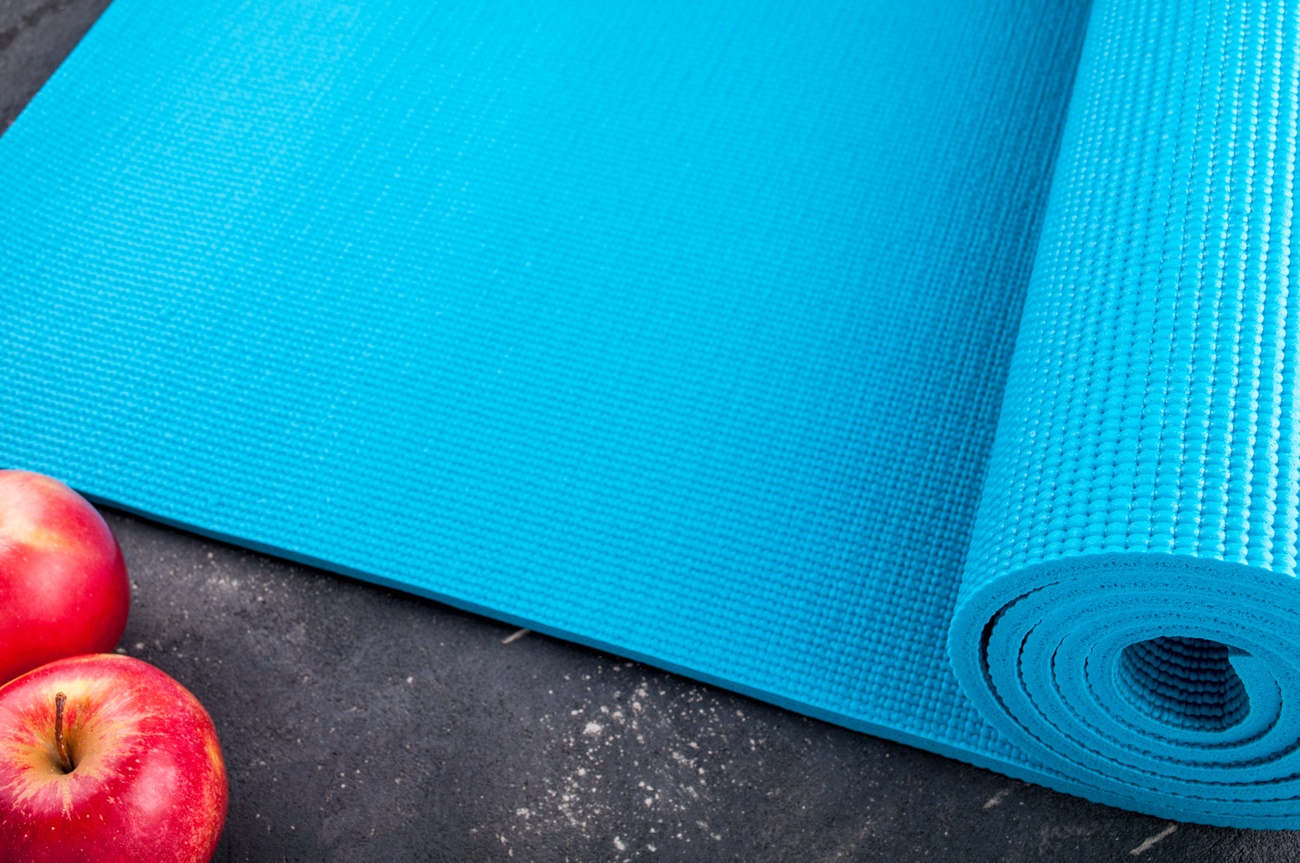 Fasting. Don’t do it. Period. There is nothing gained physically by putting your body through a period of semi-starvation. If your body has a physical response it will be nervousness – nervous that a famine has arrived, and when our bodies have famine anxiety they respond by conserving (burning less) energy by lowering the metabolism.

Using ghee as your primary cooking fat isn’t a great idea. It is a saturated fat and in moderation it’s fine, but for heart health you want to rely on olive oil for cooking when possible.