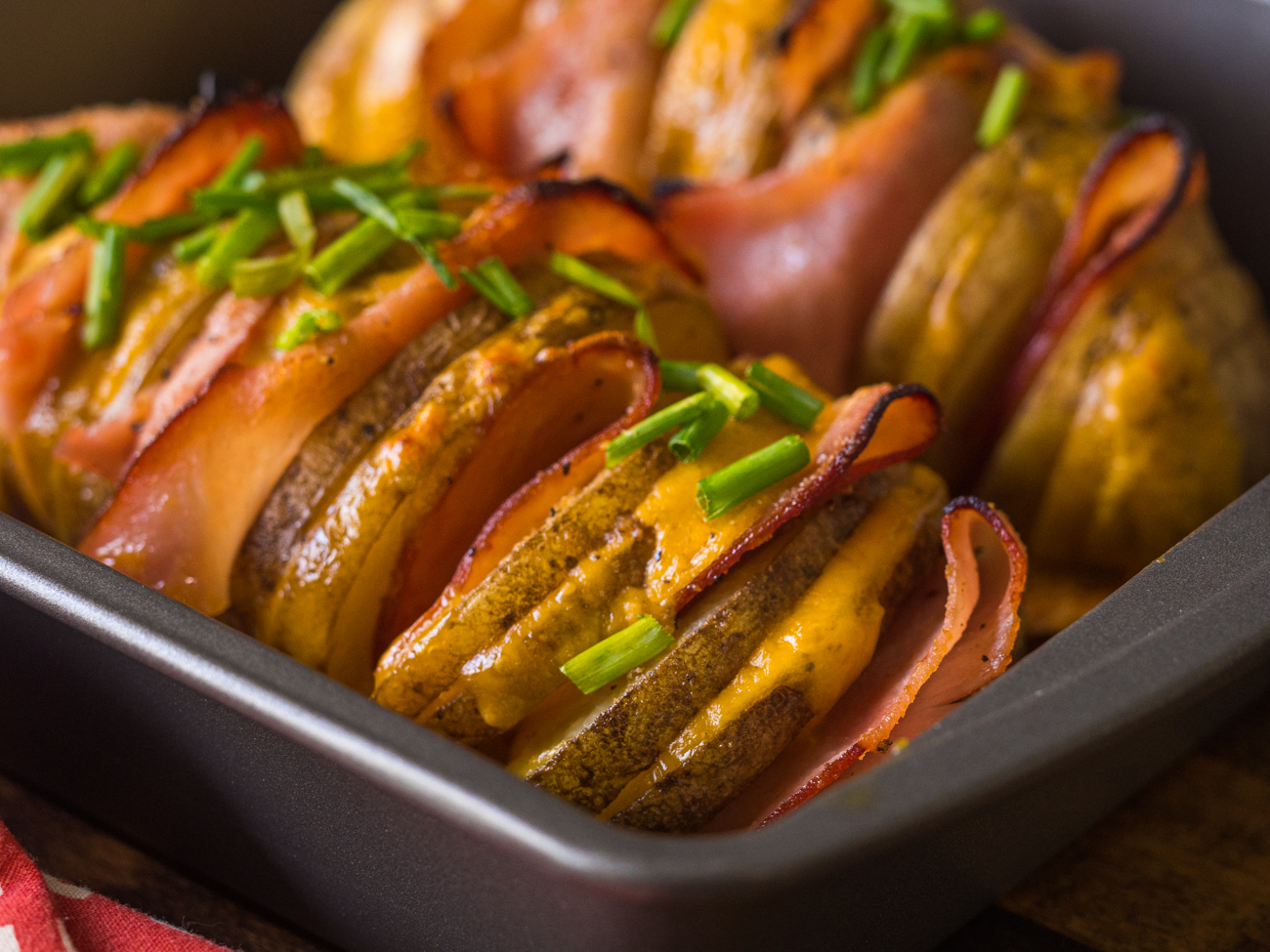 When you think of ham and cheese, you probably think of it between two slices of bread, but I can promise you that a potato is an equally great vehicle for the classic combo. In these Ham & Cheese Hasselback Potatoes, slices of ham and cheddar are tucked into countless slices of a fluffy russet, brushed with butter and baked until everything is golden brown and melty. They don’t take much time or effort, but they’re an utterly delicious – if not unique – way to satisfy a meat and potato craving. 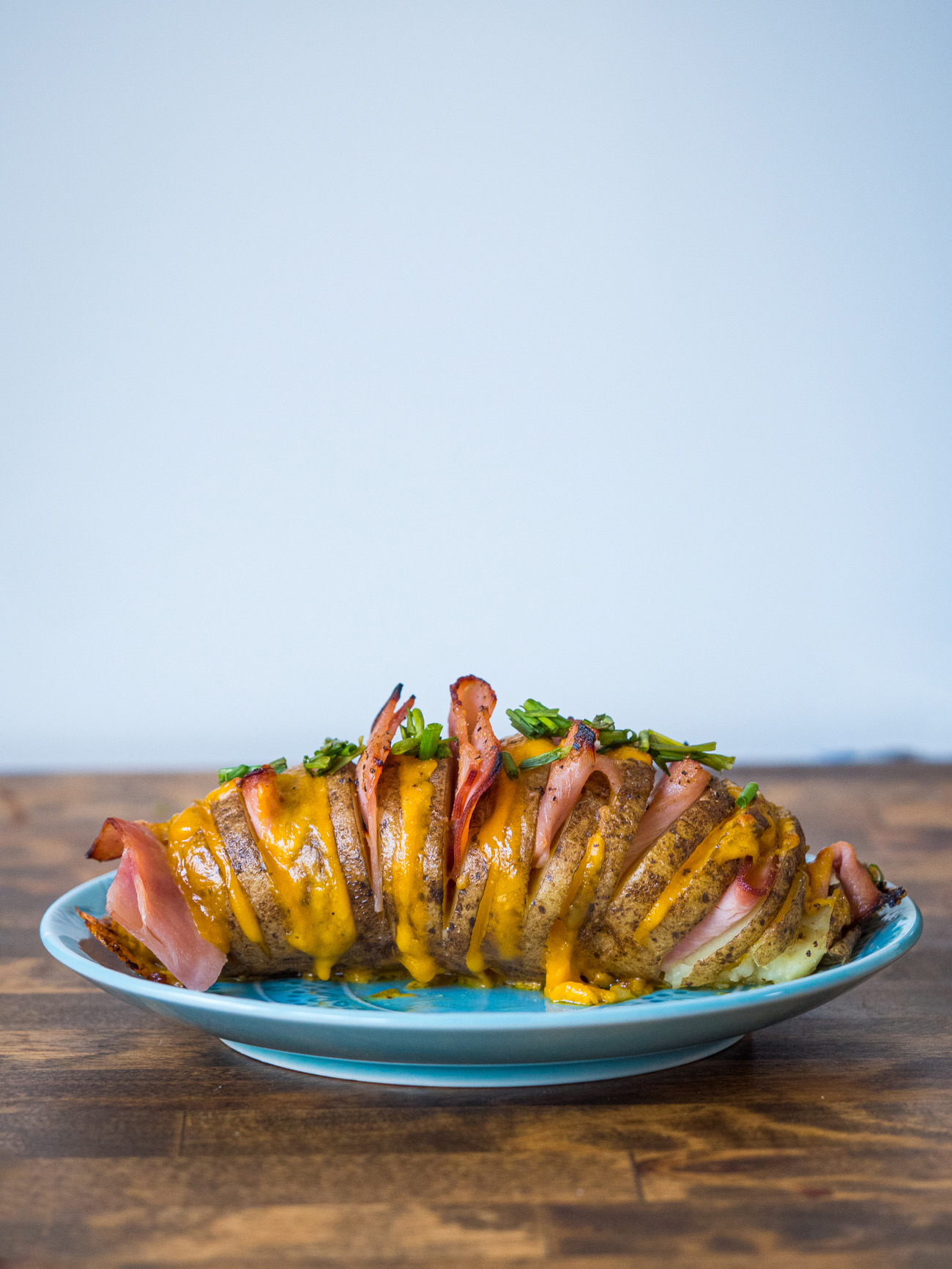 If you haven’t yet had the pleasure, a hasselback potato (or chicken breast or squash or pork tenderloin… you can hasselback pretty much anything) is just a potato that’s been sliced across the surface multiple times, but not all the way through, so it fans out and allows for some goodness to be tucked into the cracks. I love the method because it’s a great way to introduce a lot of flavor to a simple ingredient without a lot of hassle. And because they feel a little more special than your average baked potato. 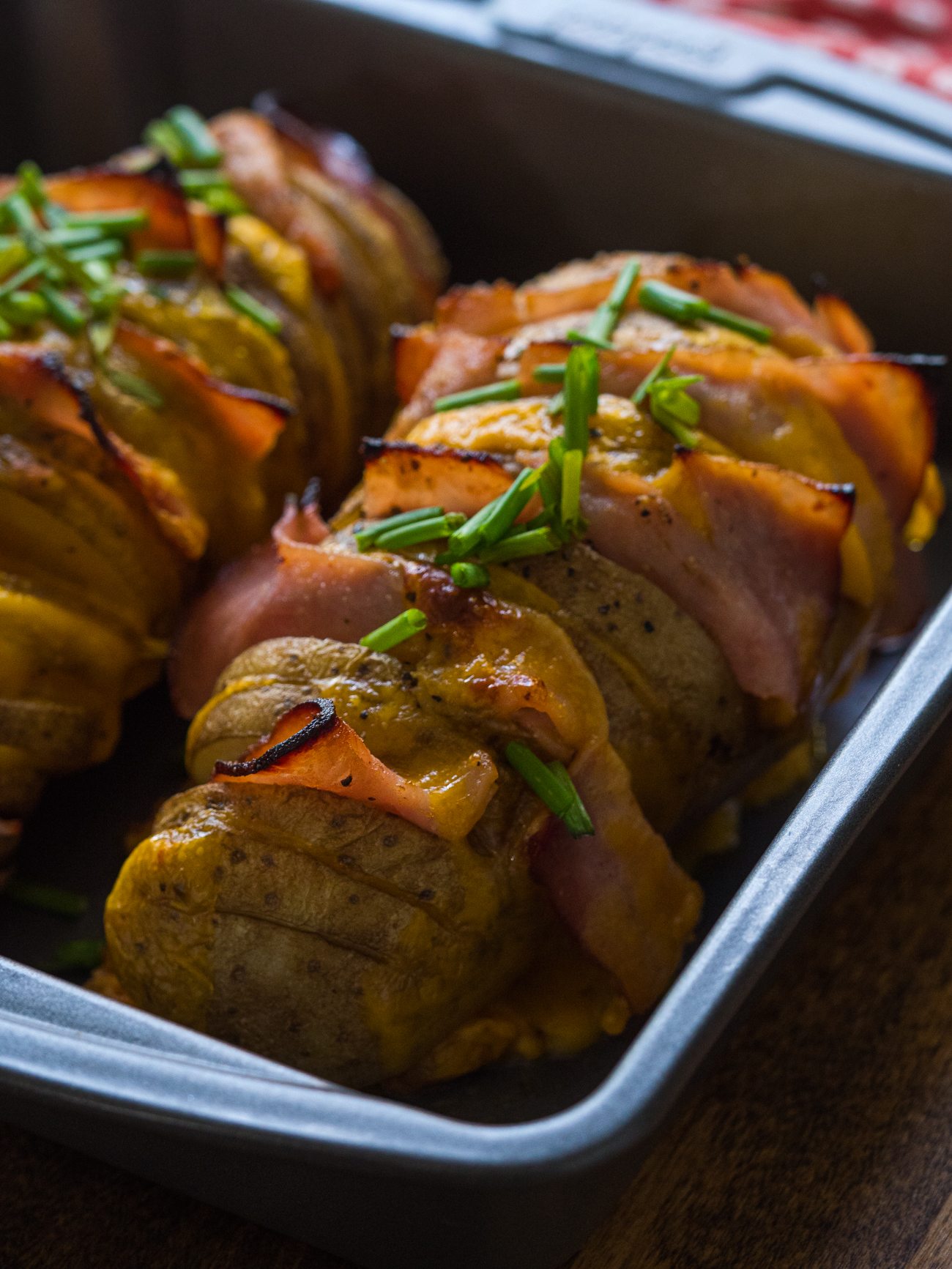 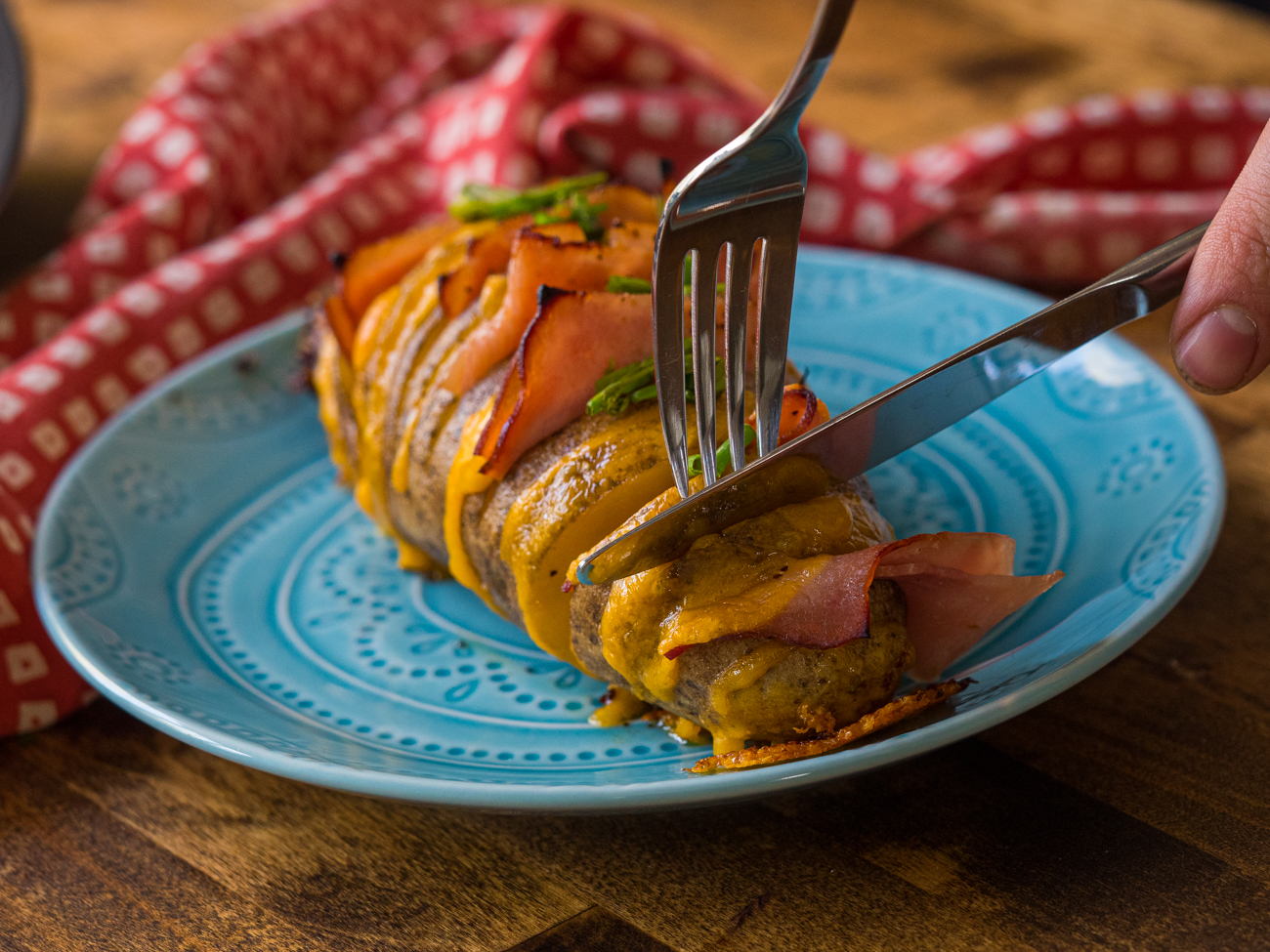 When you’re hasselback-ing something (that definitely works as a verb, okay?), there’s a simple way to ensure you don’t cut all the way through the thing you’re slicing. You want to have at least a quarter of an inch or so at the bottom so everything still holds together, and you can do that by laying a chopstick or the handle of a wooden spoon alongside the potato while you cut. That way, your knife runs into the wood and doesn’t make it all the way down to the countertop or cutting board. Easy peasy. 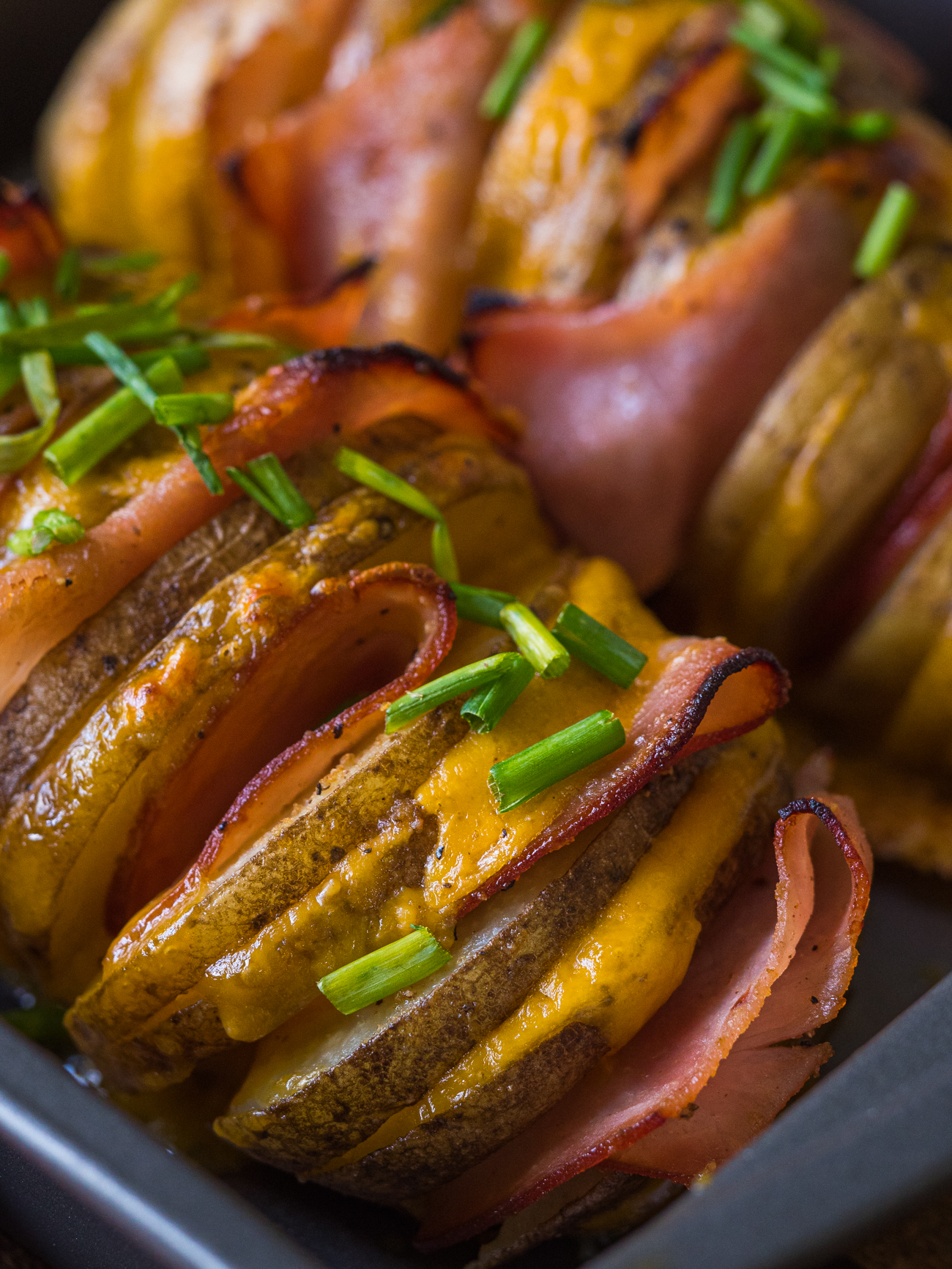 For these, the potatoes are pre-cooked in the microwave beforehand to make sure that the ham and cheese don’t burn during the baking time. You want them just fork tender but not yet fluffy, so they’ll slice easily but not fall apart. From there, you just stuff ’em up and let them hang out for a little bit in the oven until they’re delightfully tender and totally crammed with hot, savory ham and ooey-gooey melting cheddar. (It’s every bit as good as it sounds, I promise.) 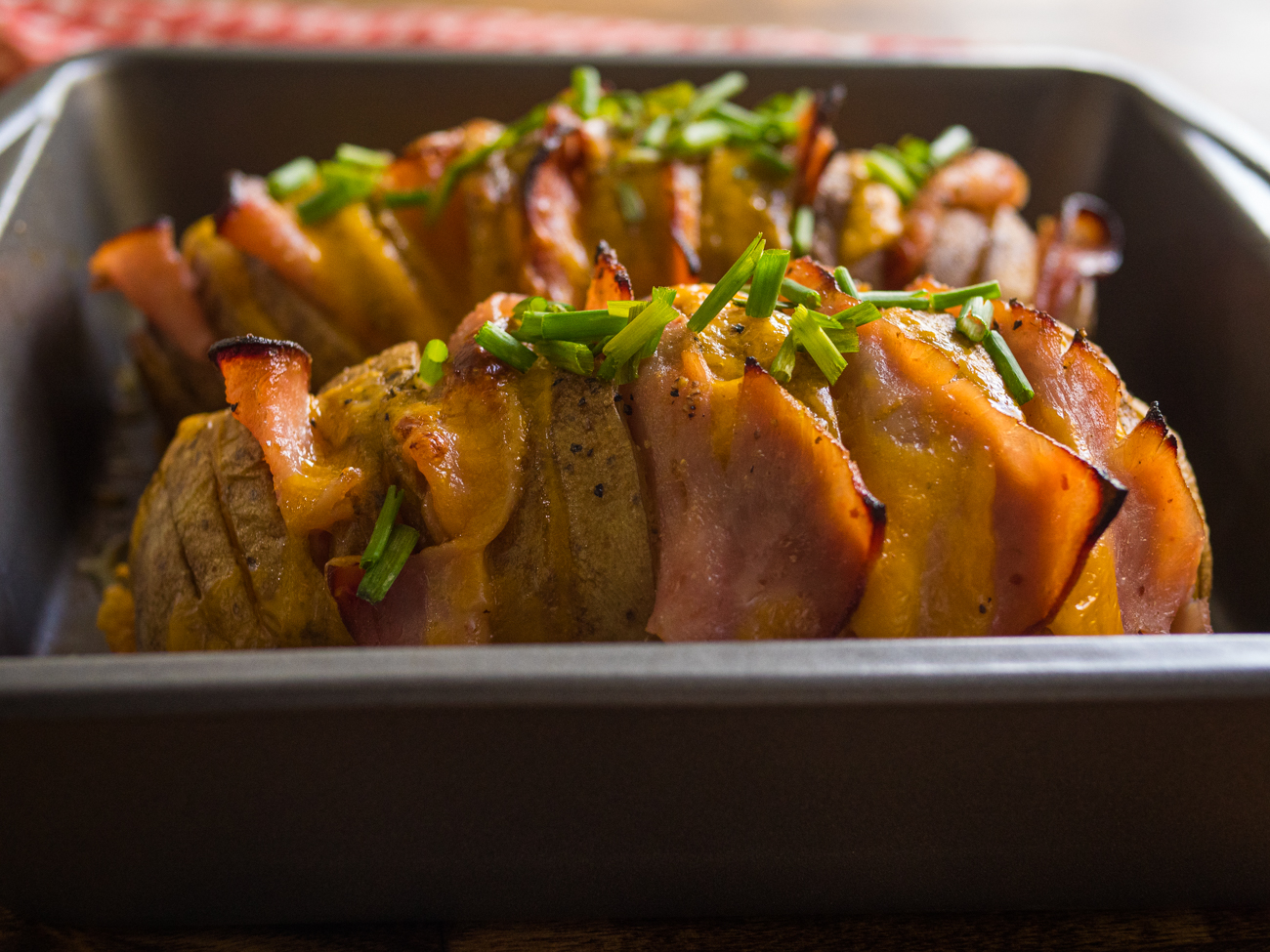