This story originally appeared at Goodfullness by Anastasia. 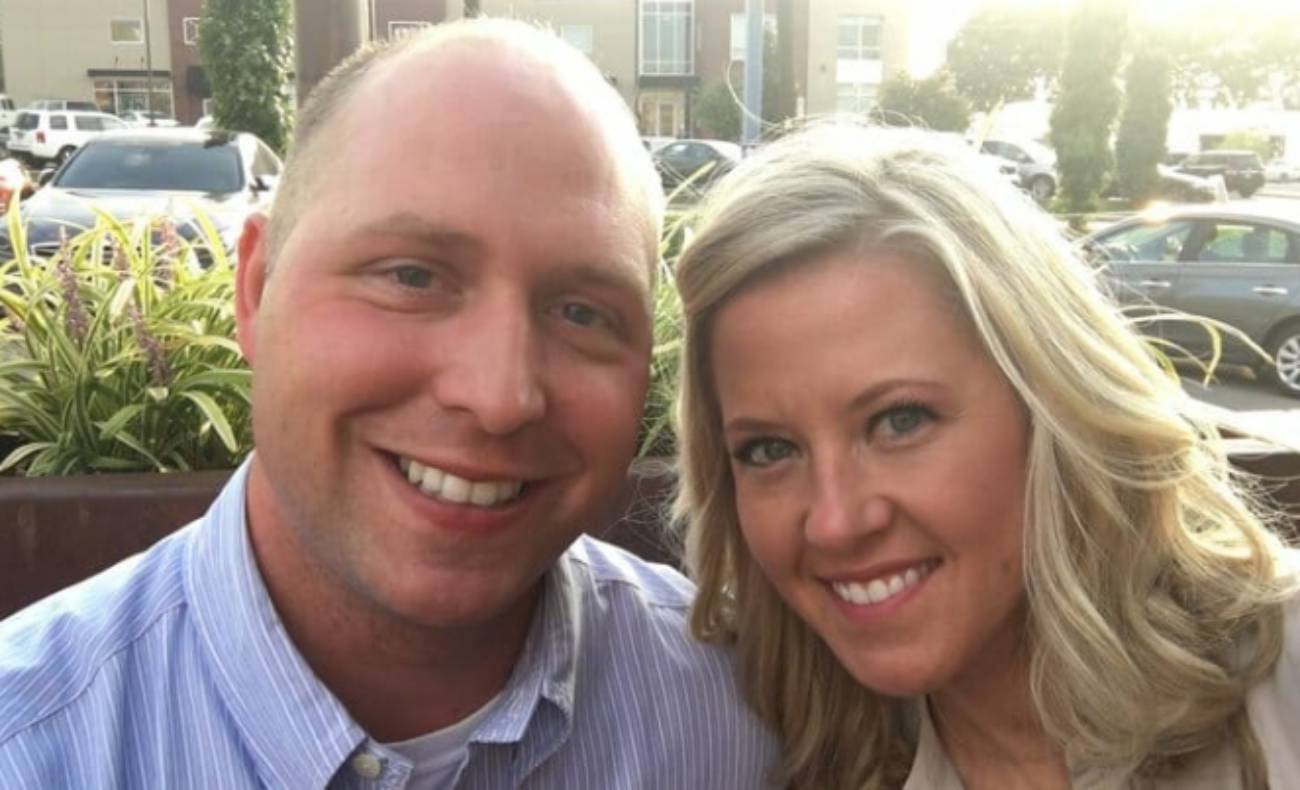 Most couples get wedding gifts that are to be opened right away. However, for Kathy and Brandon Gunn, they received an unusual gift from Aunt Alison in the form of a wait-to-open gift. It was left with strict instructions on the side of the white gift box that read, “Do not open until the first disagreement.”

Surprisingly, they did as instructed and left the gift sitting in a closet, untouched. And that is where it remained long after arguments and children for nine years. They’d forgotten about it until one day they decided to finally get around to opening it. And they were both amused and amazed by what was inside. 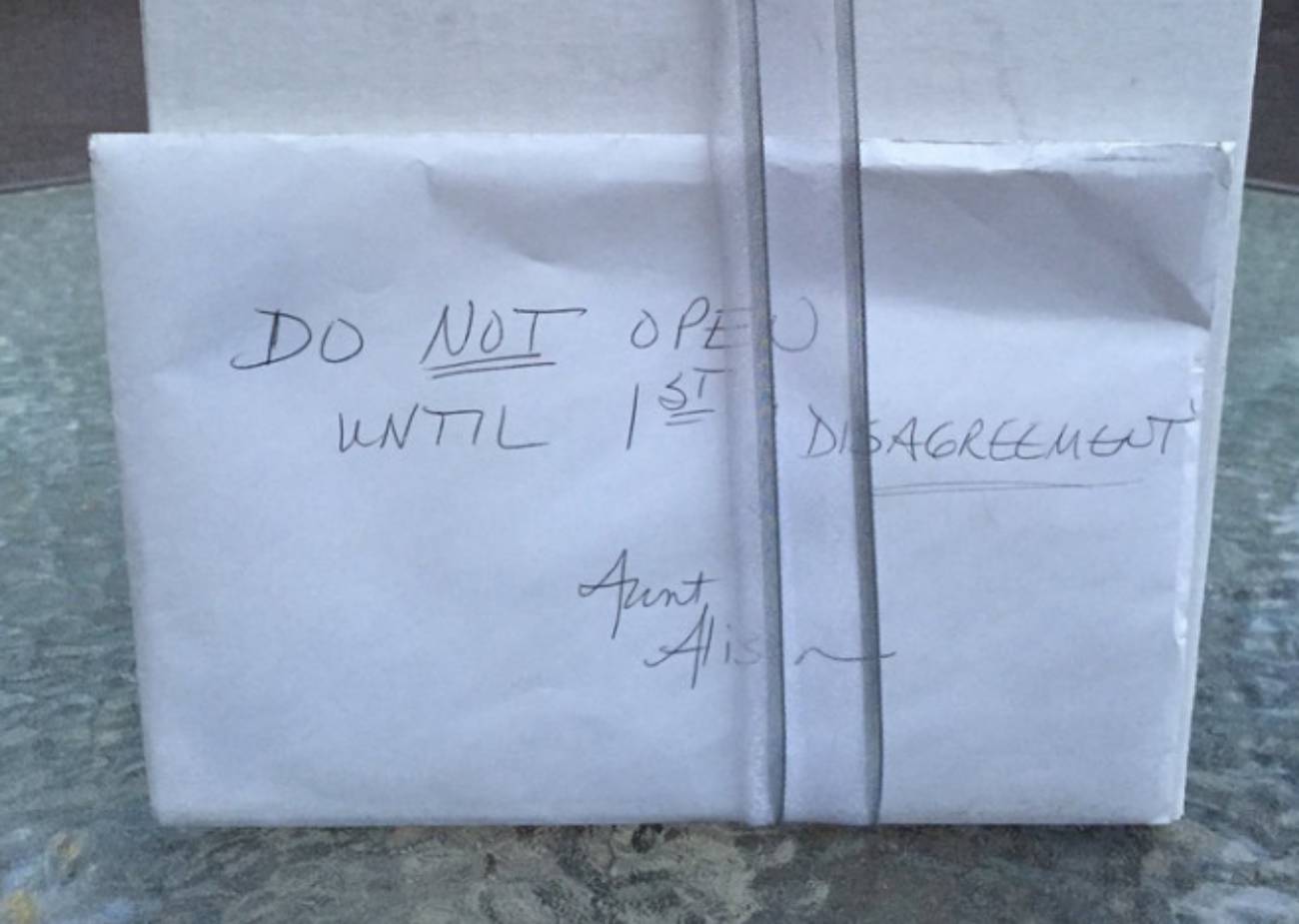 “There had obviously been plenty of disagreements, arguments and slammed doors throughout our 9 years. There were even a couple of instances where we both considered giving up… but we never opened the box. I honestly think that we both avoided turning to the box because it would have symbolized our failure. To us, it would have meant that we didn’t have what it takes to make our marriage work – and we’re both too stubborn and determined for that. So, it forced us to reassess situations. Was it really time to open the box? What if this isn’t our worst fight? What if there’s a worse one ahead of us and we don’t have our box?!? As my Great Uncle Bill would say, ‘Nothing is ever so bad that it couldn’t get worse.’”

Kathy and Brandon had a wedding to attend and while brainstorming a gift idea for the couple, Kathy remembered the unopened wedding present from her aunt. Over the years they’d moved three times, and each time the gift was placed the storage closet of each new house. In a way, it was almost a comfort to have it sealed and bound. However, that evening they decided to finally open it. Inside they found two handwritten notes for both Brandon and Kathy. Other items in the box were a small amount of cash, a delicate crystal flower vase, bath soaps, and two wine glasses.

The note to Brandon read, “Go get flowers and a bottle of wine.” 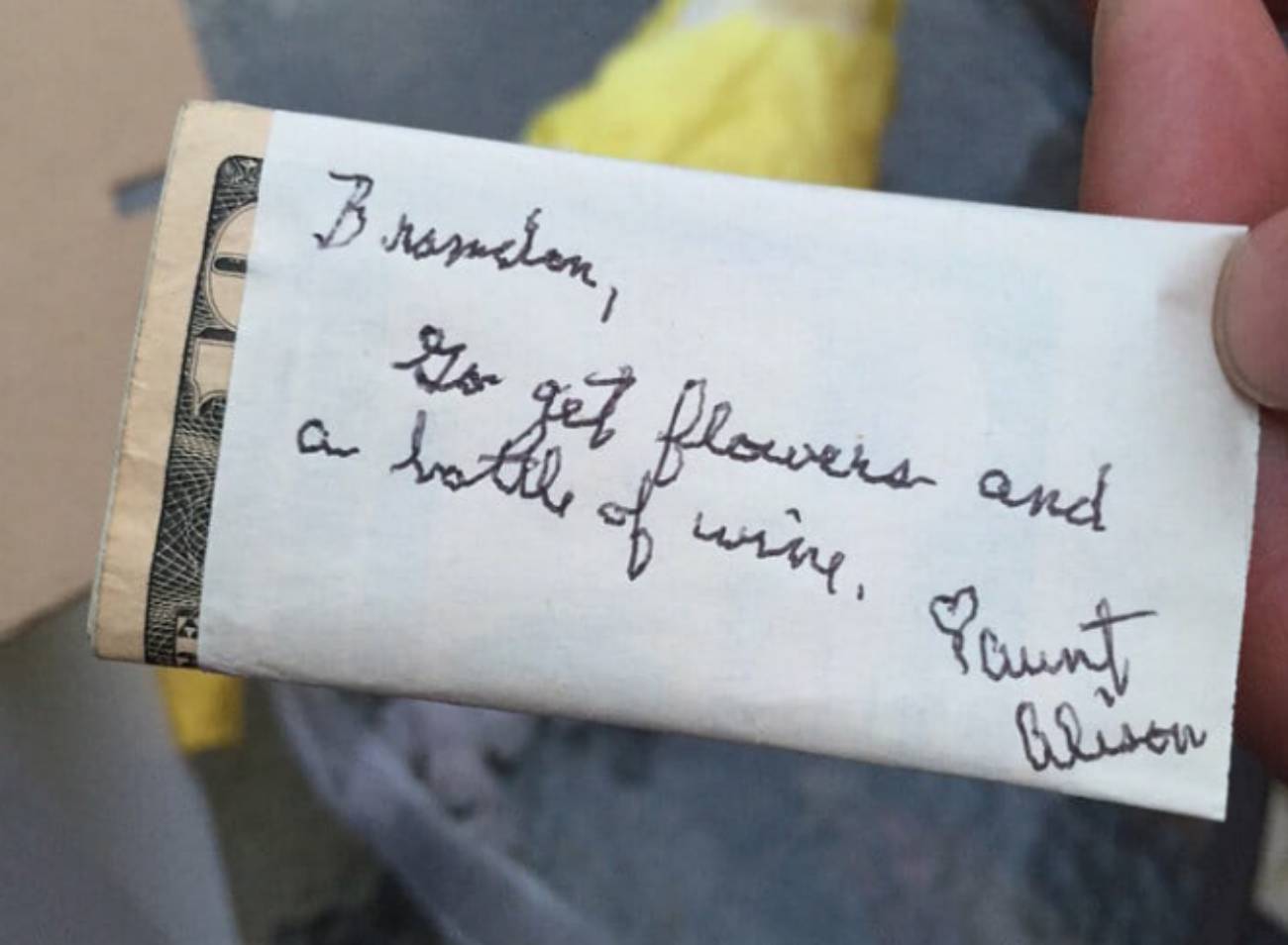 Kathy’s note said, “Go get a pizza, shrimp or something you both like.” 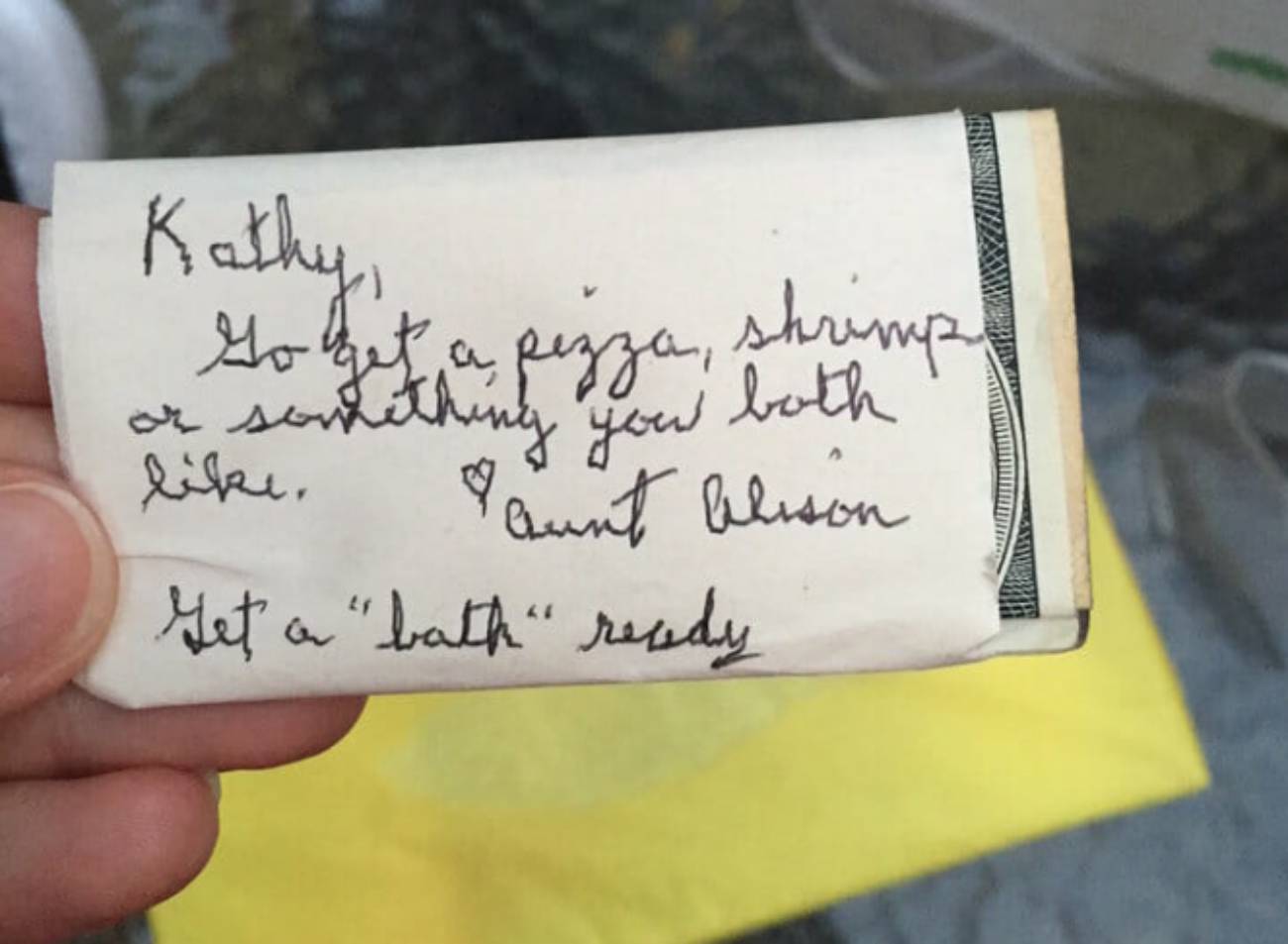 Everything in the box was essentially a first fight survival kit: flowers, wine, a romantic pizza dinner, and a bath. Kathy and Brandon were touched by Aunt Alison’s thoughtfulness.
Kathy wrote, “All along, we assumed that the contents of that box held the key to saving a marriage – an age-old trick – unbeknownst to us rookies. After all, my Great Aunt and Uncle had been married for nearly half a century. So, we thought the box would save ‘us’ – and in a way it did.” 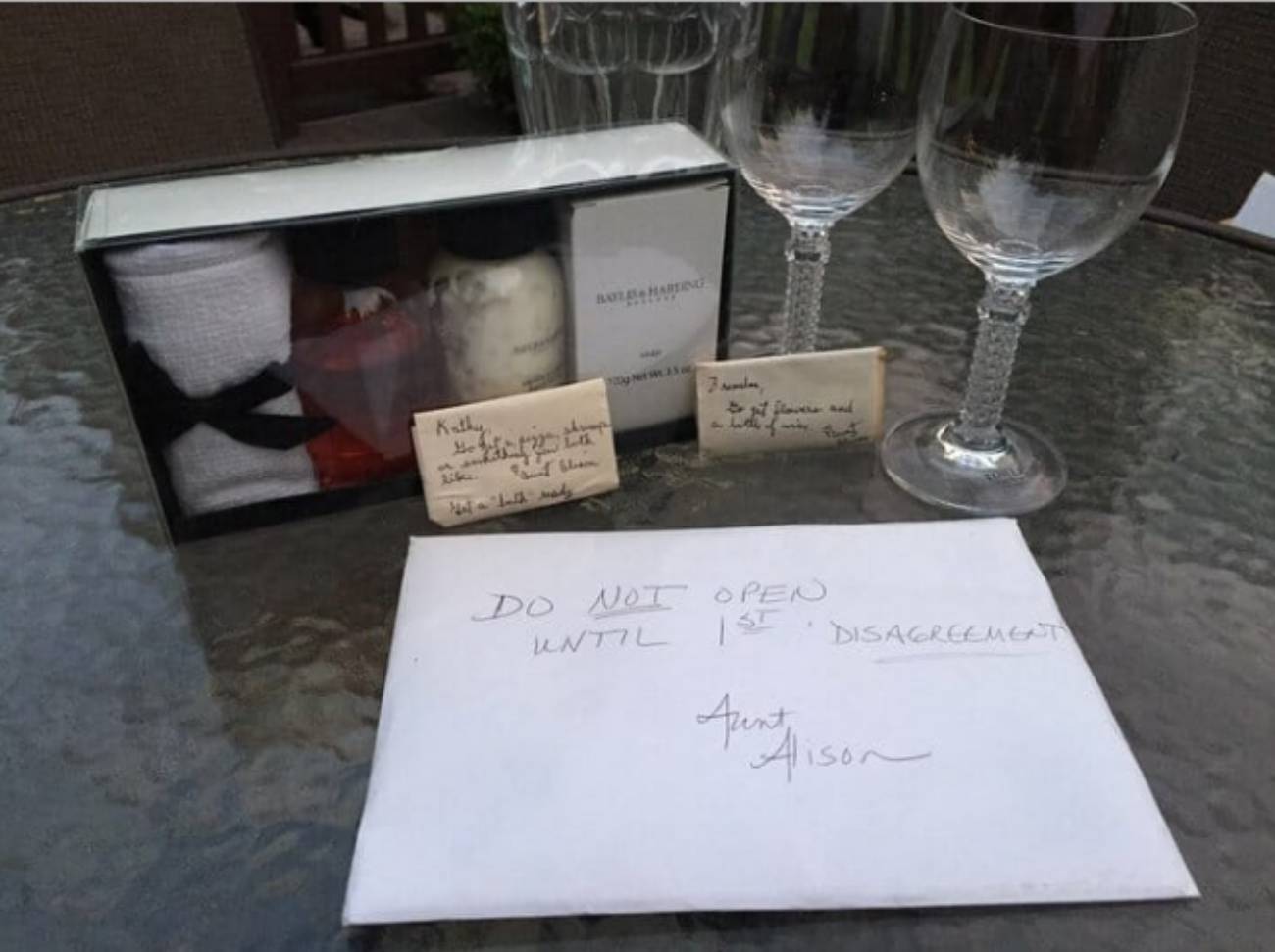 The idea behind the gift wasn’t actually the items. It was a lesson in patience and perseverance. They could have opened the gift at their first quarrel, but they held on. They had gotten to a point in their marriage where they knew they couldn’t live without each other, and then they opened the box. Waiting nine years to do that helped them build a wonderful and solid marriage full of love, trust, and patience. They’d always believed the box was there to save their marriage, and in a way it did, just unexpectedly.