The Internet is full of memes and jokes that make us wonder if the people are actually joking or not. Twitter is a prime example of this. It’s the type of site that encourages people to play fast and loose with the truth. One minute, you’re shaking your head at a tweet that looks like it is serious. The next minute, you’re being told that the person was just trolling. 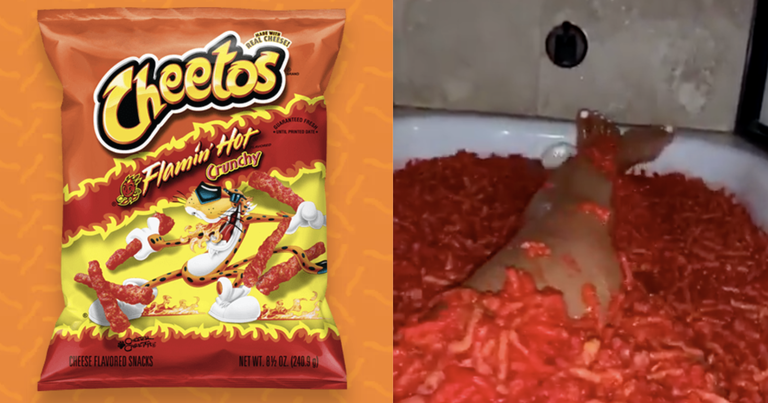 Twitter has given us no shortage of horrifying content over the years and, now, we are here to bring you the latest from this insane platform. A woman decided that she was going to bathe in Hot Cheetos. Instead of keeping this to herself like any other sane person, she elected to put it online. How else are you going to get the likes and retweets?

The caption reads “Omg so needed after this stressful day” and we can’t understand how this would help you unwind at all.

omg so needed after this stressful day 😫 pic.twitter.com/n6Q2zxmFwP

The tub is even filled with Hot Cheetos water.

I have so many questions. How many Costco-sized bags of hot Cheetos are in there, and how did you clean that up? Would you do this again? Did you notice a difference in your skin later on? The next day? Also, what was in the glass?

We are curious as to whether this “bath” had any sort of long term effects. It can’t be good for the skin, right?! There were also those who were upset about the waste of perfectly good Hot Cheetos. People who cannot fathom having access to this many Hot Cheetos at once are weeping profusely. All jokes aside, what do you think? Are you headed to Costco to load up on king-sized bags of Hot Cheetos?