The name Winnebago is synonymous with the RV and camping industry. They have been setting the trends for years and it looks as if they are setting the trend once again. It comes in the form of a camper Van known as the Solis, and it is being referred to by the director of product management at Winnebago, Russ Garfin as being the company’s “first entry into the pop-top market.”

Winnebago recognizes that camper van buyers are interested in adventure, which is why they released the Boldt last spring, a new Class B camper van. Many people who follow these trends are also familiar with the Revel, which was converted from a 144 inch Mercedes Sprinter with four-wheel-drive. They aren’t finished creating yet, and the Solis is the newest introduction after they have released at least three camper vans in less than three years. 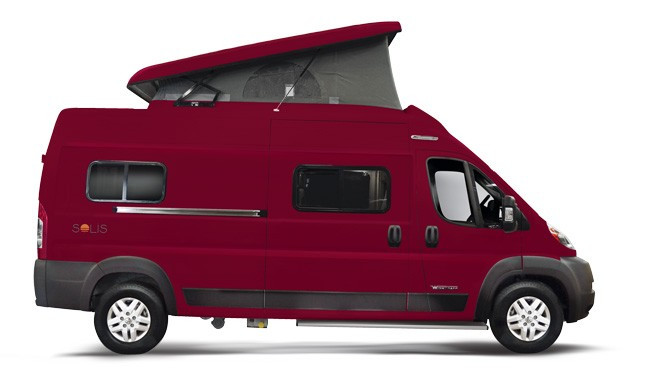 You will be impressed with what Winnebago has done with the Solis layout. Upfront, you will find two cabin chairs that swivel to either look out the windshield or to sit at the dining area that seats four people. The other two chairs are also seatbelt approved. The pedestal table can be removed and stowed away when it is not in use. Behind the rear chairs, you will find a compact wet bath, bifold door, mirror, cassette toilet, and shower.

You will not find much luxury in the galley kitchen but you will find an affordable way to feed yourself and those traveling with you. It includes a two-burner range, stainless steel sink, laminate countertop with extension and a small refrigerator that you can access from either the inside or the outside.

Perhaps the most impressive part of the Solis is the sleeping space that is suitable for four individuals. It includes a rear double bed area that can be converted to a seating space when it is not used for sleeping. A queen-size Murphy bed is also available as an option or a sofa bed with two additional three-point seatbelts. In other words, the parents can drive upfront safely while the kids are sleeping safely on the optional sofa bed or the two chairs in the front. 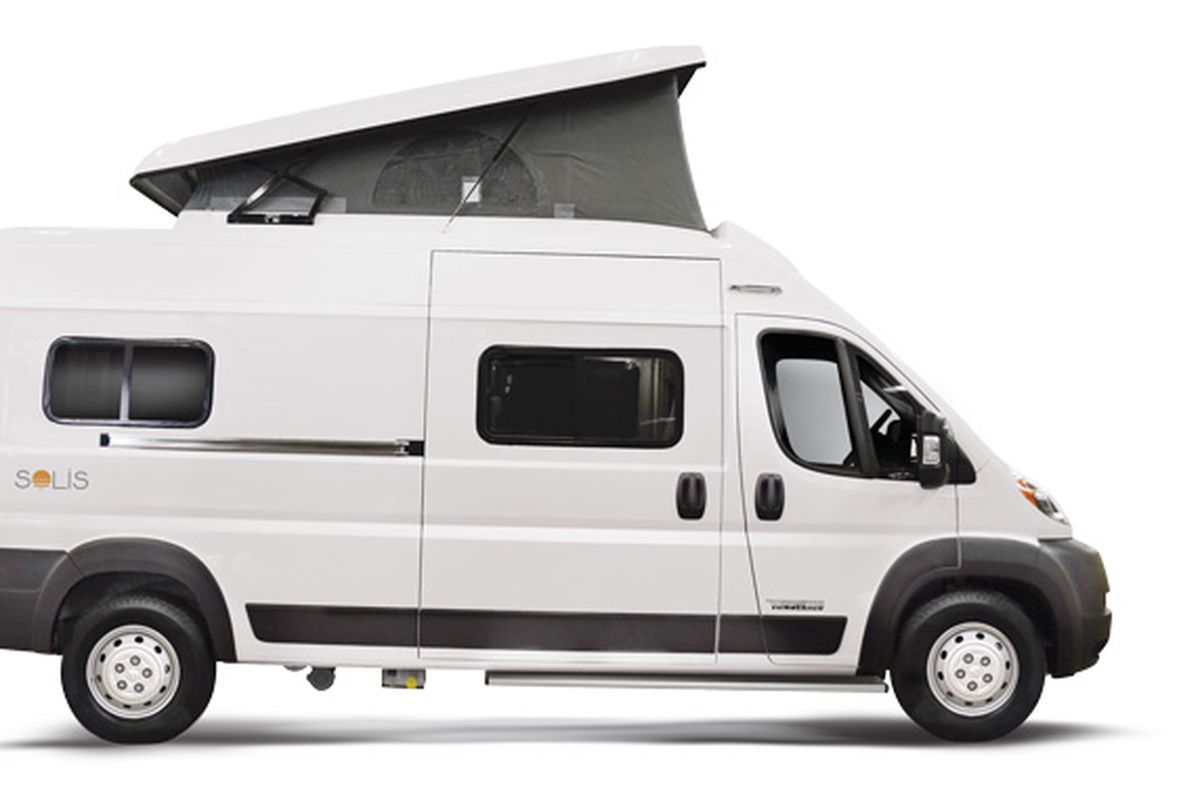 Regardless of your choice, the rear sleeping area will offer plenty of room for two people and the fiberglass pop top area with three windows can sleep another two people.

This isn’t the first time that a camper van has been designed to sleep four people but not all of those vans work as well as the Solis. The Winnebago Revel only allows enough room for three people to sleep but even then, it is difficult to fit everyone in. Another option for sleeping four is the Hymer Aktiv but there are reasons to consider your choice carefully. You might also want to take a look at the California-based ModVans but be sure to look carefully before you sign on the dotted line.

The Solis has quite a few other surprises, including the blackout zipper screens, removable access ladder for the pop-top and additional storage below the bed or with an upper cabinet. There is also a pole between the two doors in the back and a privacy screen so you can get changed without making it a public event. You can also use the privacy screen as a Shade awning or a drying rack.

Winnebago has really provided something interesting to the RV market with the Solis. Not only does it carry the Winnebago name, but it also comes in at a lower price and could easily accommodate a family of four. It will be interesting to see the reviews once the Solis actually hits the road to find out if it is as friendly for camping in the winter as it would be in the warmer weather.

Check out the video tour of the van below to learn more: