On St. Valentine’s Day 1929, the Stock Market Crash that would launch the world into the Great Depression was still months away. Couples prepared to celebrate the holiday in style with heart-shaped boxes of chocolates and cards with cherubs on them. But, there was also a massacre planned on that very same day which would see 7 seven murdered in cold blood in the Windy City of Chicago. Warning: graphic images to follow. 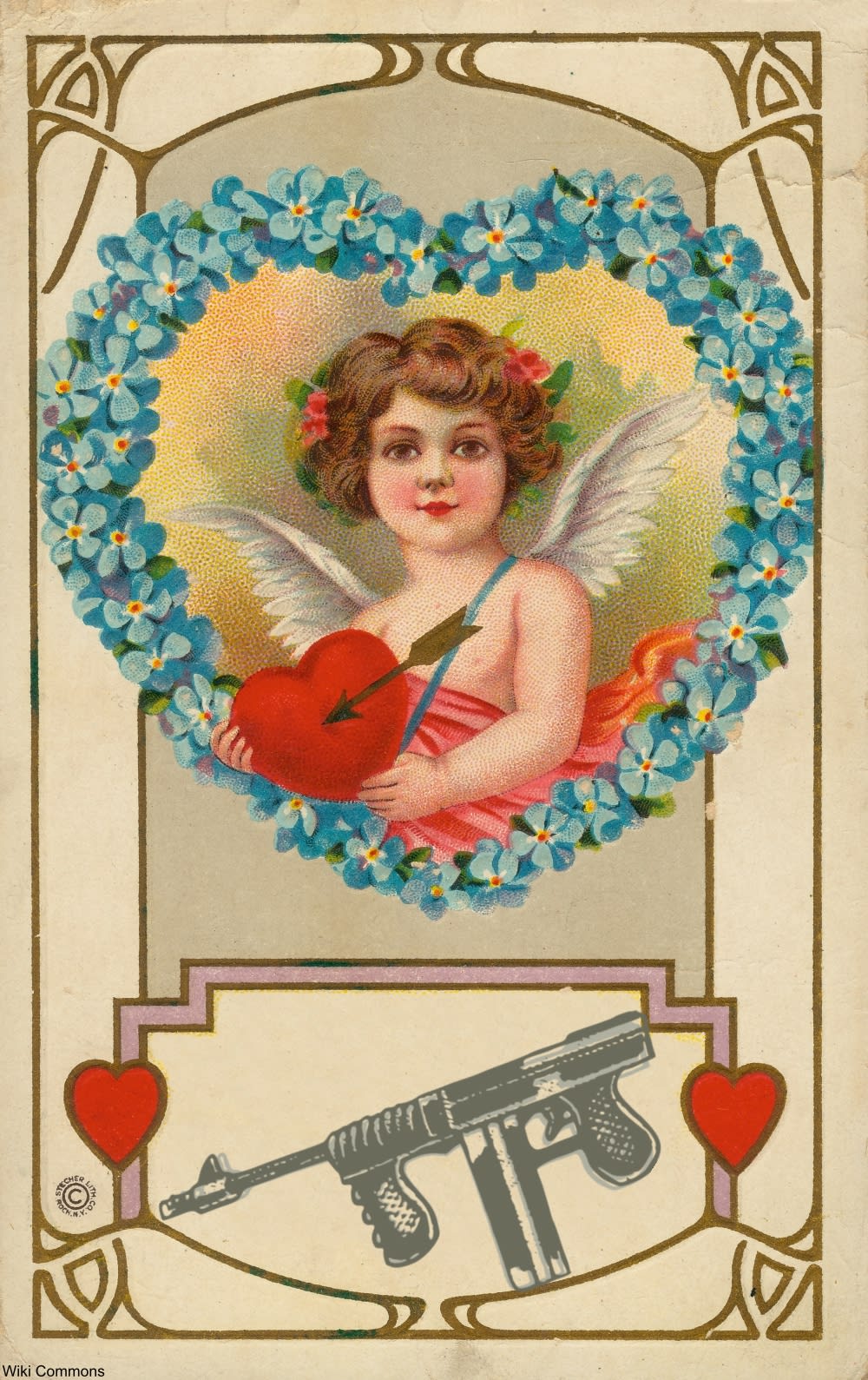 The Rise of the Gangster

It might seem like some of the worst of the organized crime syndicates in the U.S. were strongest in the 1930s. But, the era of Prohibition, which began in 1920, gave rise to some of the most notorious crime families in America well before that. Bootleggers and rum runners needed protection and a robust market in which to sell their goods, which mobsters provided. In turn mobsters were literally making their fortunes off of the illegal booze that was flowing freely in speakeasies and night clubs thanks to their lucrative relationships with alcohol peddlers. 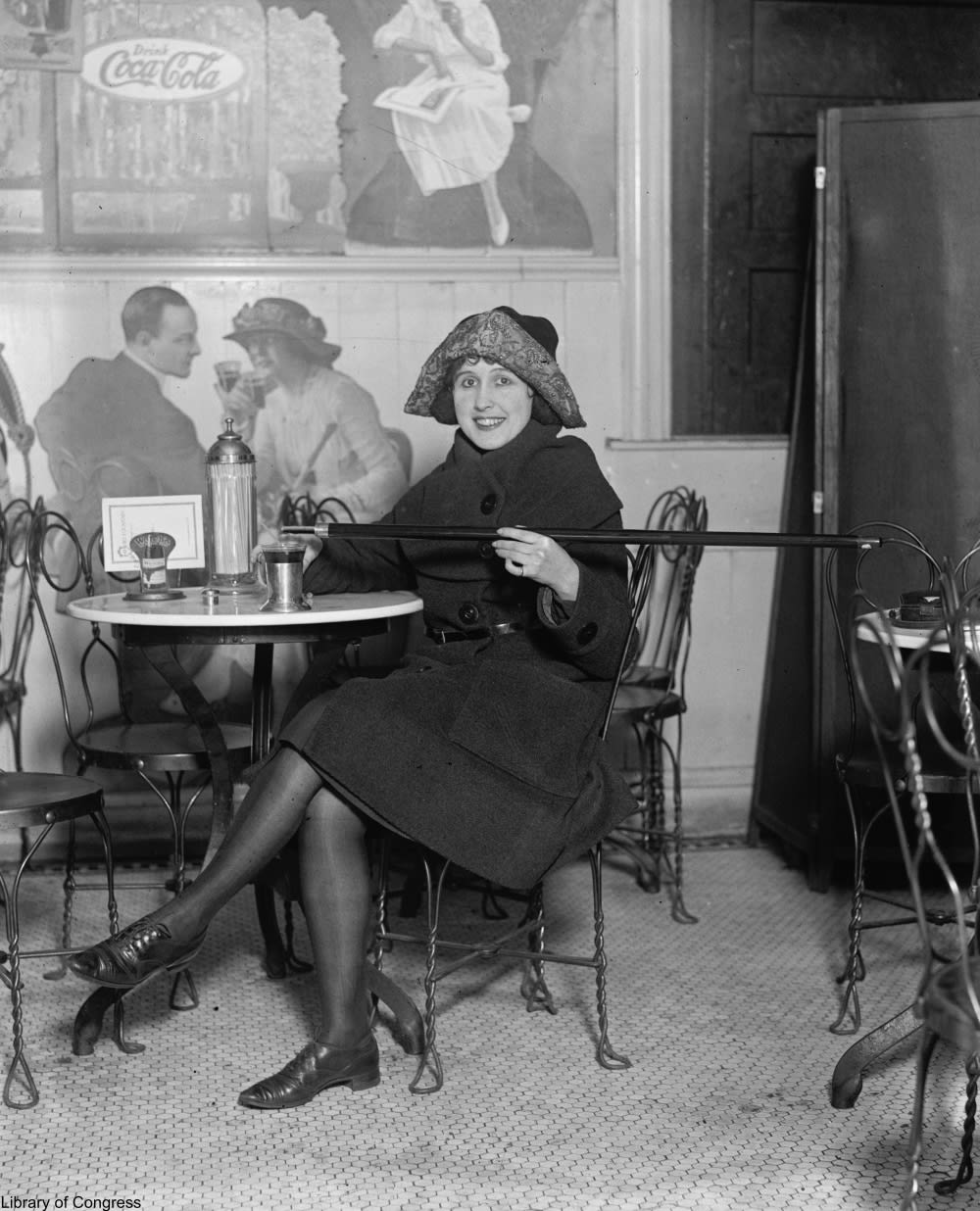 Woman pouring a tipple of booze into her cup using a hidden cane flask, 1922. Via/ Library of Congress

Because of this increase in illegal activity, many crime bosses grew to unheard of power, like Al “Scarface” Capone. It is rumored that it was his men who perpetrated the mass execution of 7 other men on February 14th, 1929. Some estimates of Al Capone’s income at the time were in the tens of millions per year: an unheard of intake of cash. In order to keep the money coming in, Capone mercilessly defended his territory and inched up on the turf of his rivals.

On Valentine’s Day morning men dressed as police officers lined up 7 men associated with the Moran gang along a wall in a garage on the North Side of Chicago where Moran operated his bootlegging business out of. Then, they opened fire on the 7 captives, who had presumably been led to believe they were being arrested. The victims were shot full of a sickening 70 rounds of ammunition while facing the wall. 5 of the men were of Moran’s group, one was an “associate,” and one was a garage worker. 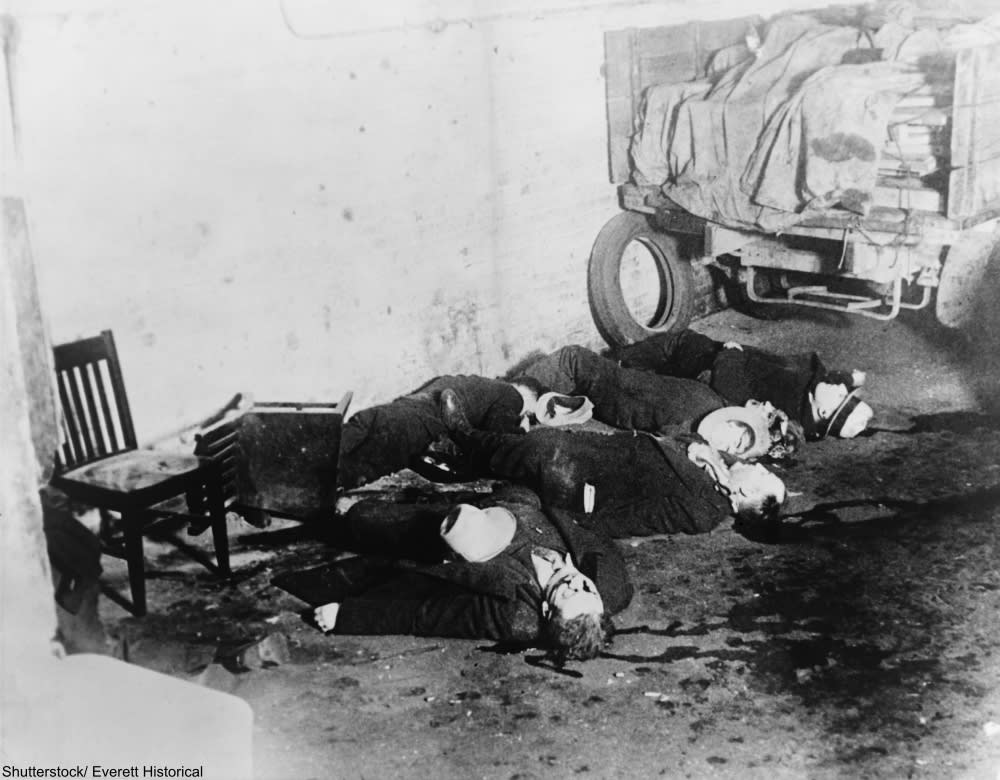 There are 6 corpses in this photo. One man was barely alive when police found him and was rushed to the hospital where he wouldn’t say who had shot him. He died shortly thereafter. Via/ Shutterstock

Their leader, George “Bugs” Moran, was only minutes away from arriving on the scene and would have been murdered along with his men had he showed up any sooner. In a comment given to a newspaper, Moran had pointed the finger at Capone, stating “only Capone kills like that.” Capone on the other hand retorted with, “The only man who kills like that is Moran.”

The Aftershock of the Massacre

The assassins used Tommy guns (short for Thompson guns) which became synonymous with organized crime of the 1920s and 1930s because the gun’s only market was for civilian use. The now famous mob gun had been invented too late to be the star of World War I, but instead found a home among criminals and in movies. This submachine gun could fire 600-725 rounds per minute and quickly became the new choice of gun for criminals who needed to do some serious damage in a hurry. 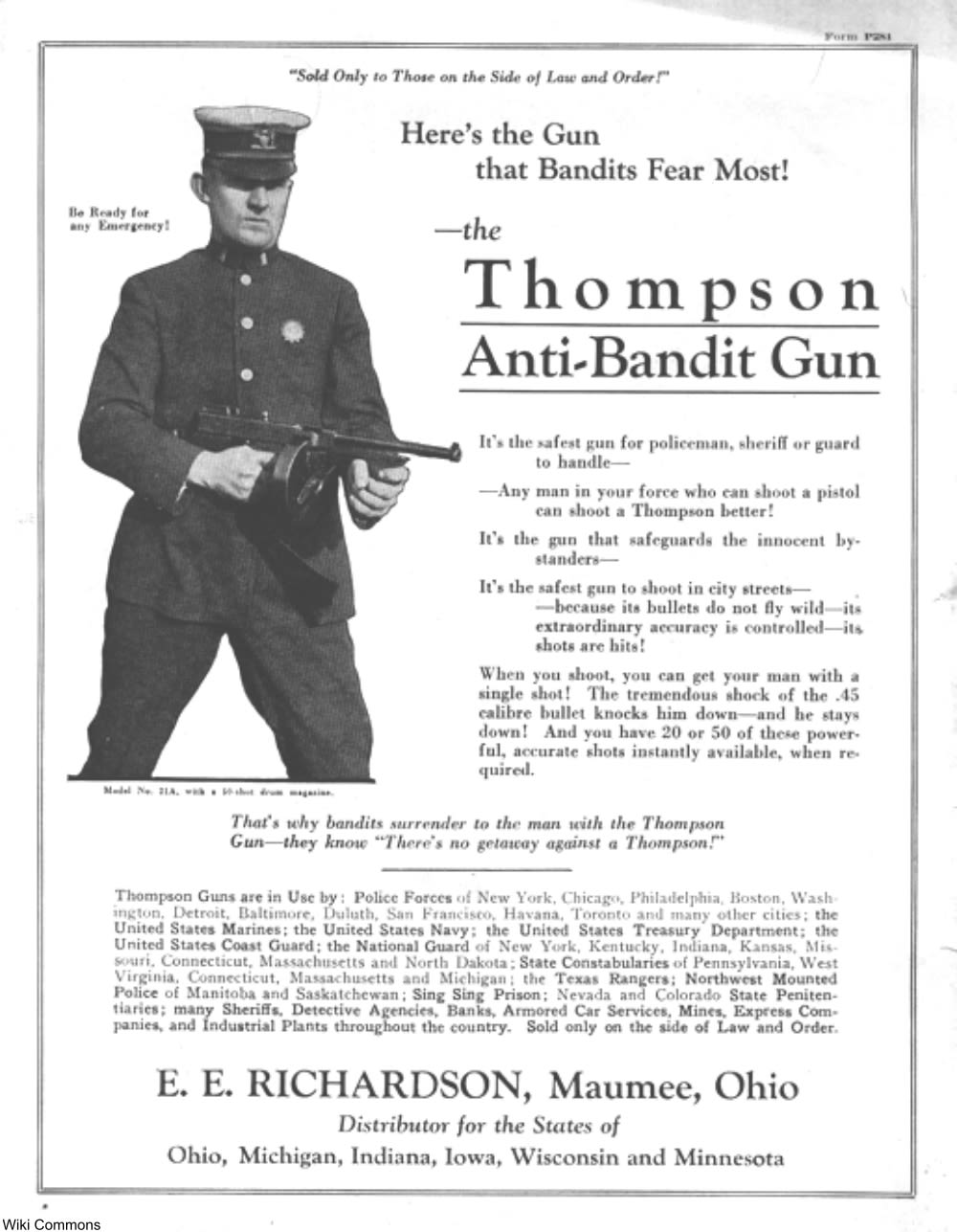 The St. Valentine’s Day Massacre was one of an ongoing spat of brutal gun violence between the two gangs which had been boiling since 1926. Both sides had committed very gruesome and public killings that neither were ever charged for.

Despite the brutal and bloody nature of the St. Valentine’s Massacre, neither Moran not Capone was ever brought to trial over the killings, but the bad publicity for Capone signaled the beginning of the end for this once-savvy gangster. Capone was subpoenaed later that year and served less than a year for contempt of court and carrying a concealed weapon. In 1931 he would fall hard with his tax evasion charges for which he served 8 of the 11 years he was sentenced. Capone died from syphilis complications only 2 years after he was released. At the time of his death Capone has significant loss of ability due to syphilitic infection of the brain. 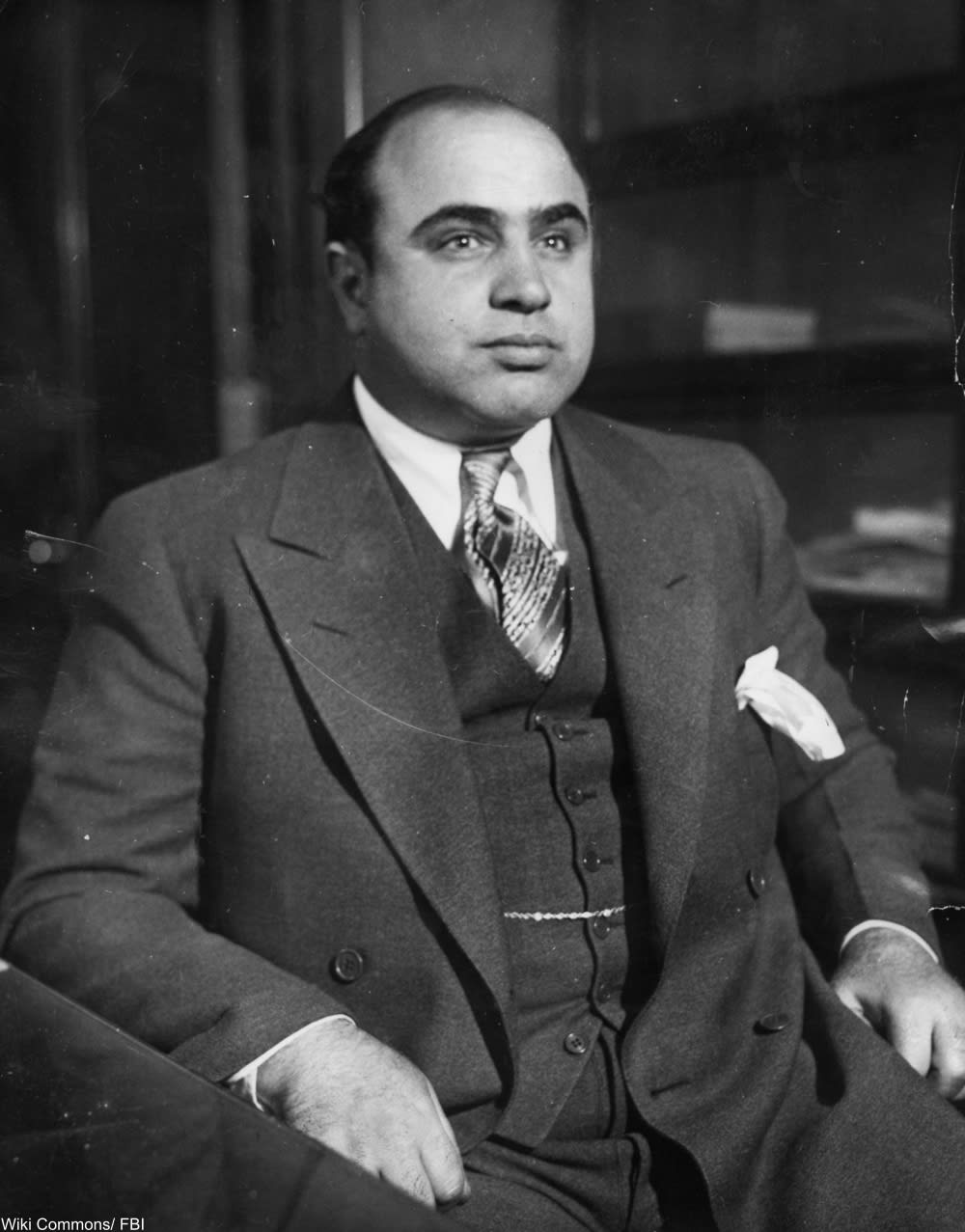 Moran’s crime ring never quite recovered after the St. Valentine’s Day Massacre. After leaving the organized crime business Moran served various prison sentences for theft and petty crimes. He died of lung cancer 1957 while in prison for committing robbery.