Open the Williams Sonoma catalog and you can find a plethora of kitchen gadgets all supposed to make your job in the kitchen, anything from baking cupcakes to making cocktails, an easy experience. But, for the rest of human history outside the 20th century, cooking has been a fraught endeavor- one that took mountains of time and energy and sometimes fell completely flat despite the best efforts of the cook. However, beginning in the Middle Ages in Europe there was one kitchen accessory that every home of note had at the ready: a small dog. 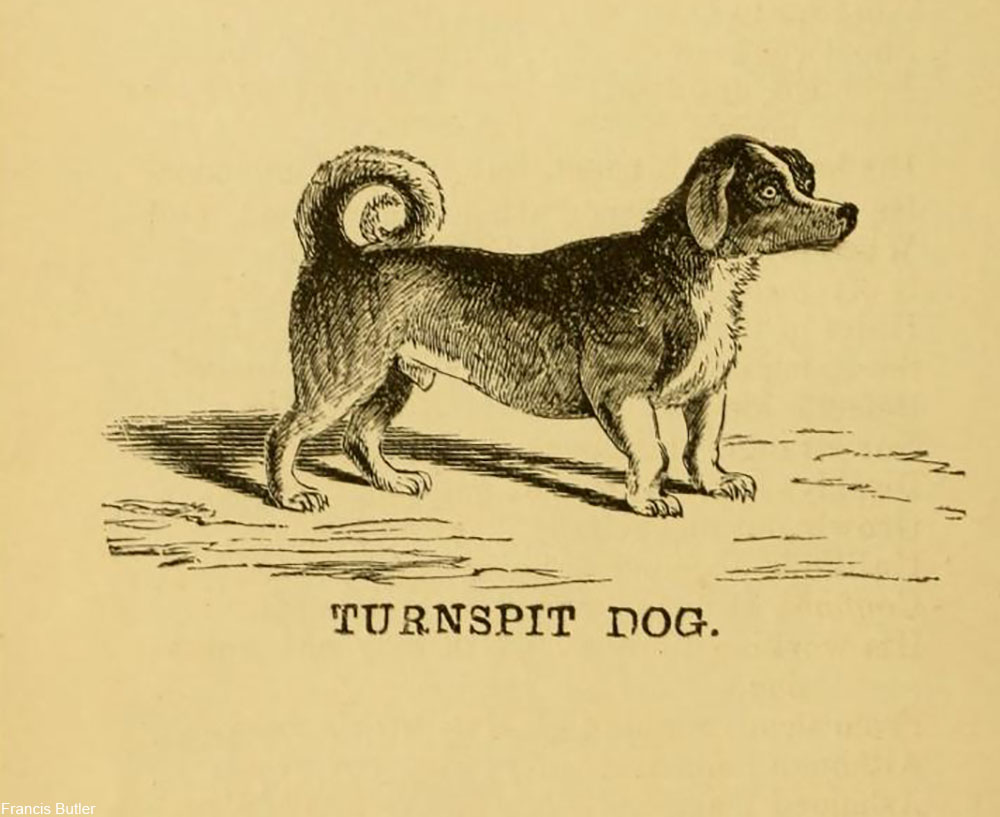 In the days of feudal lords and ruling monarchies, the biggest kitchens served up to hundreds of people per day in large manor homes and castles. In order for food to be available to both staff and occupants all day everyday, a huge deal of work had to be outlaid by the cook and his or her kitchen staff. Scullery maids and lesser employees were set to monotonous tasks such as keeping the fires going and turning the roasting spit which cooked the meat over the open flame. 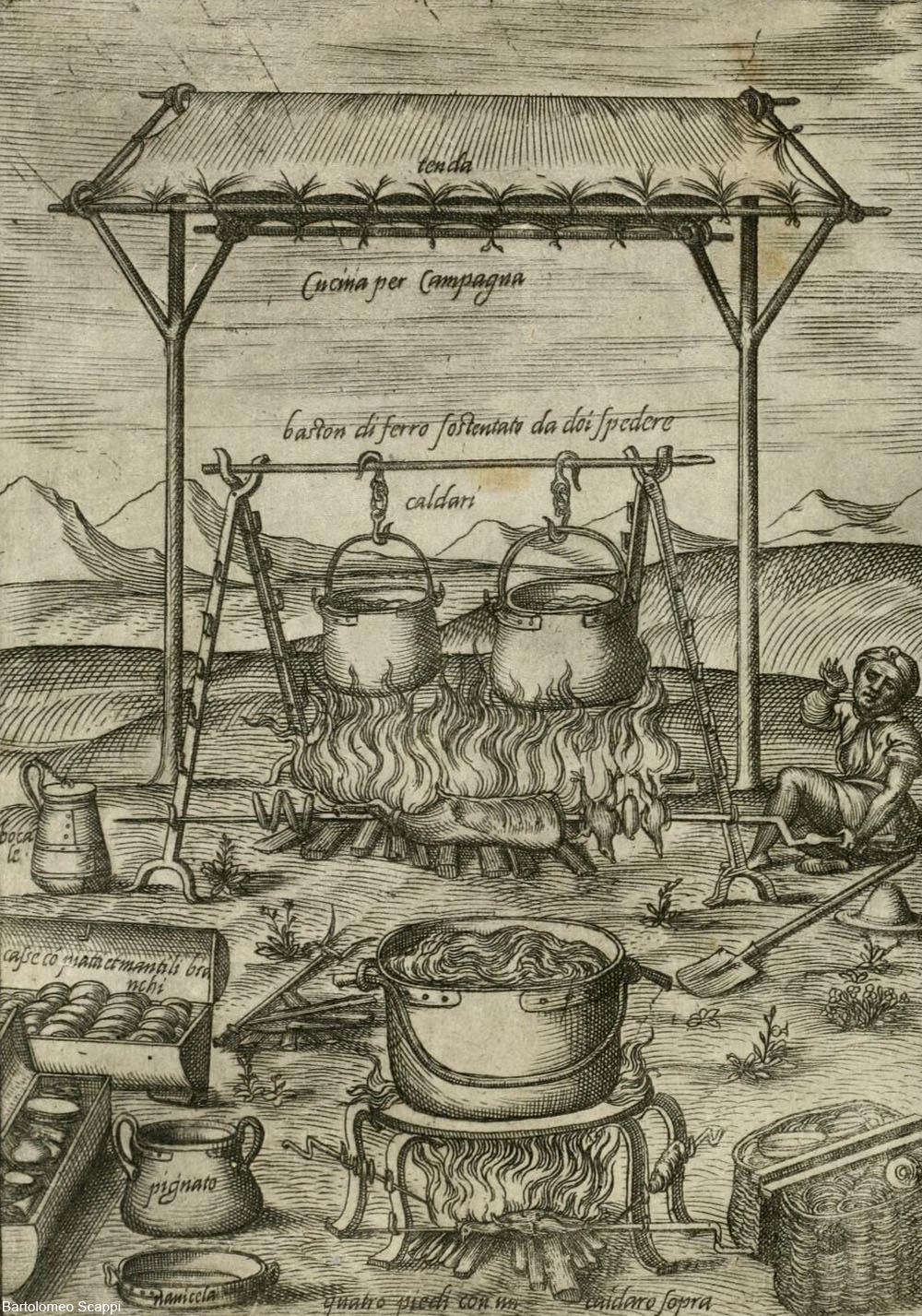 But, it was in the 15th century that a mechanized spit was developed. There was a chain or cord which would turn the spit, ensuring that the meats, of which many kinds were cooked each day, would be cooked evenly. And who would turn these mechanized spits? The answer was obviously little dogs. 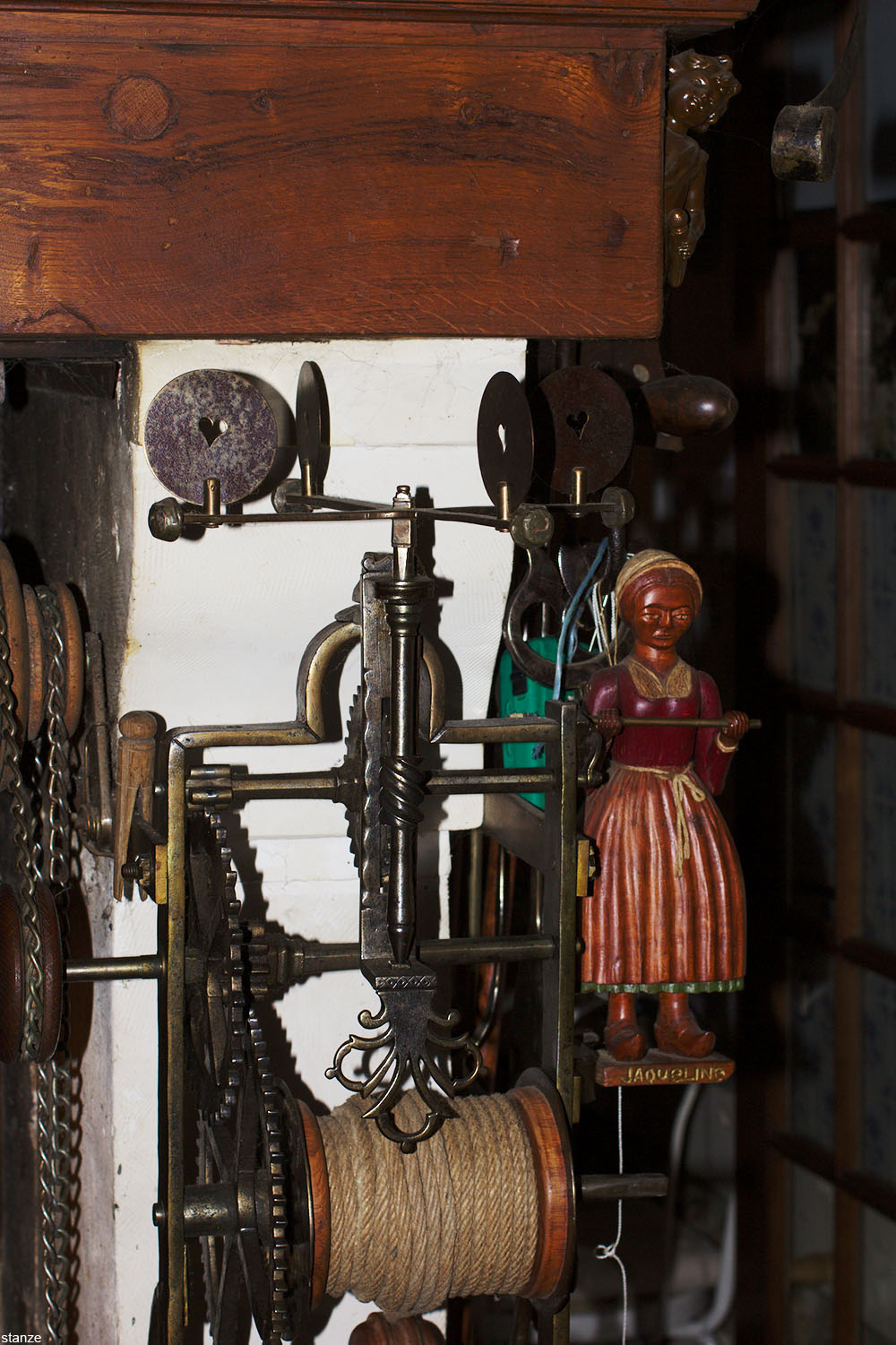 Set inside a contraption much like a bigger version of a hamster wheel, these small dogs could power a roasting spit and free up the human servants for other, more involved tasks around the kitchen. The type of dog most commonly sought out for this task was bred for the task, but by all accounts was considered quite ugly at the time. The breed was referred to as Canis Vertigus or “dizzy dog” for the vertiginous job it was supposed to do. 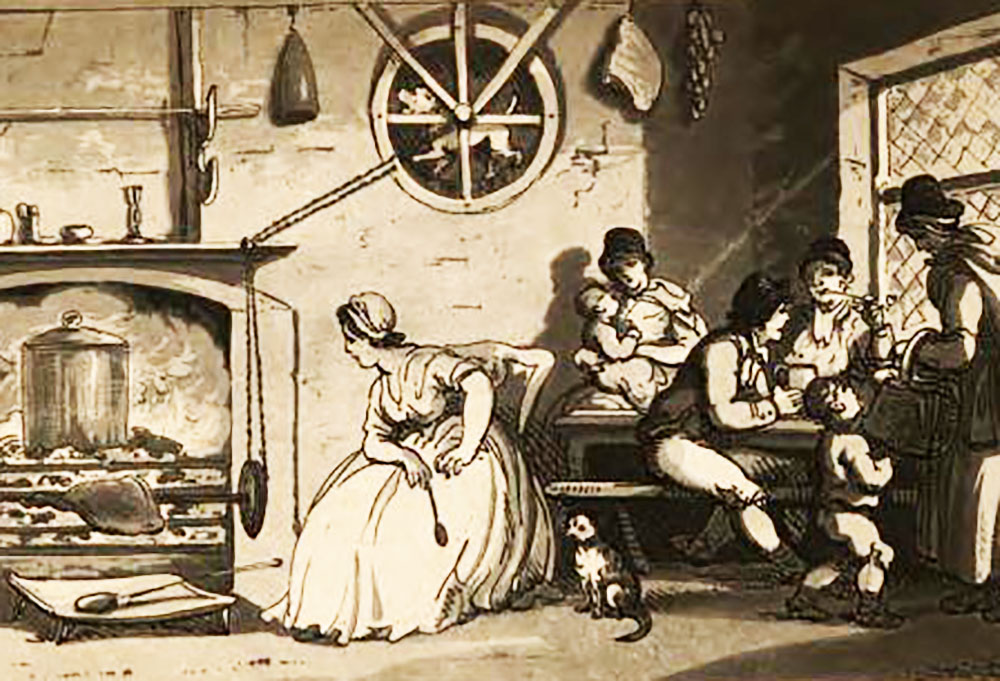 Accounts of the era are all we have to go on as to what these dogs looked like since the breed is now extinct. Edward Jessy, author of the book, Anecdotes of Dogs (1858), recalled that the dogs were, “long-bodied, crooked-legged, and ugly dogs, with a suspicious, unhappy look about them, as if they were weary of the task they had to do, and expected every moment to be seized upon to perform it.” Francis Butler, author of Breeding, Training, Management, Diseases & C. of Dogs (1877) composed this poem about the breed, “Turnspit Dog”:

Low bandy legs, and a disproportioned back;

Eye of intelligence, ear rather small,

Nose quite extensive, teeth, the best of all;

His home the kitchen, ‘prenticed to the cook,

He notes her movements, scans her every look.

When fat and lazy and for work unfit,

Is oft’ incog., when called to turn the spit.

Hides in the garret, or would fain be lame,

So dinner’s late and Bandy gets the blame.

Displays his ivories, and with angry tone,

Growls out menacingly, “let me alone.”

Unlike his compeers, never made a pet,

Confined at home, and at his duties set,

From them, unguarded, he slyly steals away.

Although his master often may you greet,

Ashamed t’acknowledge Bandy in the street:

Alone perchance you’ll find him on the jog. 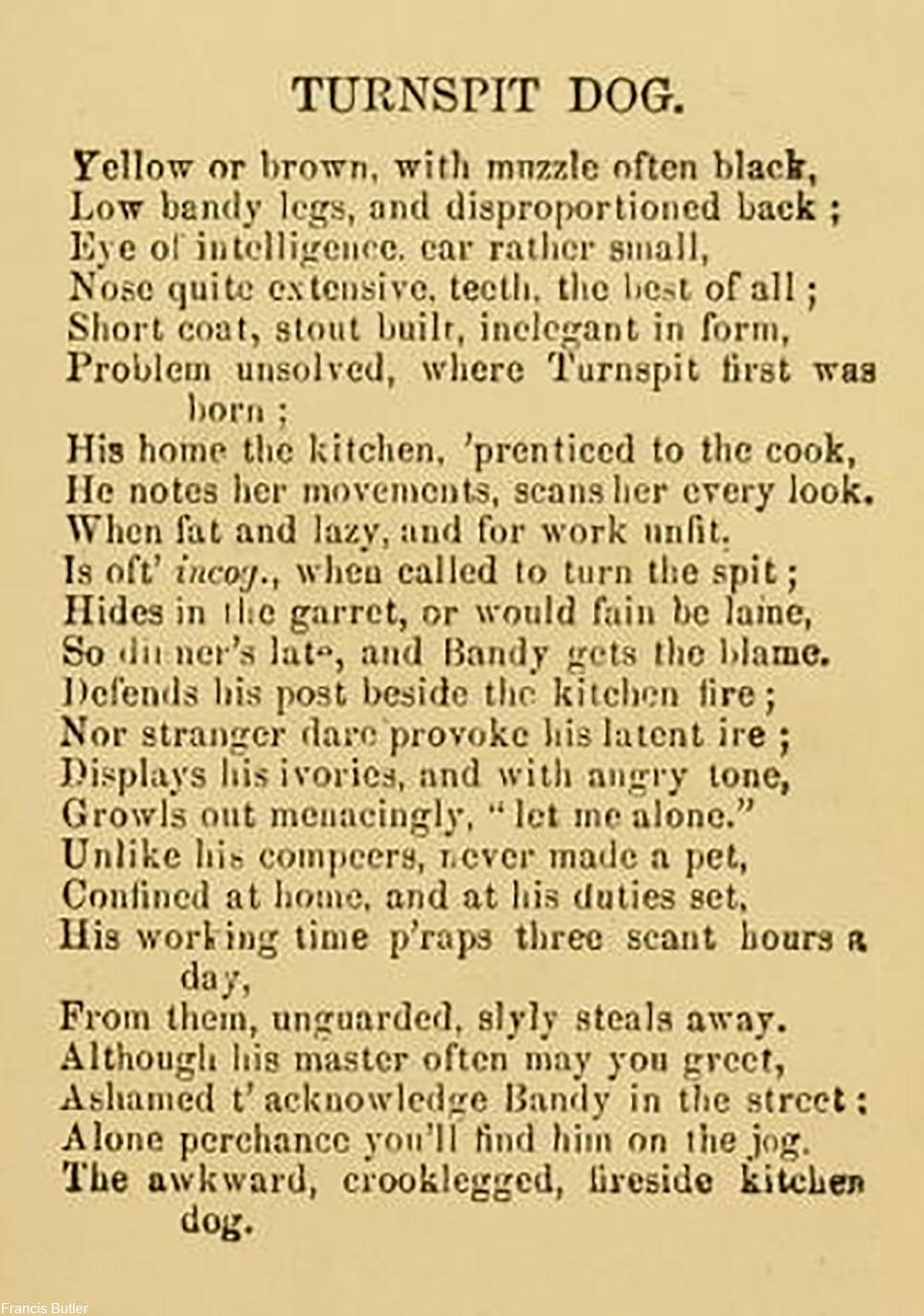 So it’s clear the dog was not looked on as a pet, nor was it bred for its looks. Instead, the short stature and strong back of the turnspit dogs were thought better suited to running in their contraptions and getting the job done.

By the 17th century the dogs were well known and well used in larger households. It is rumored that Queen Victoria had three, but kept them as pets rather than as kitchen helpers. The rise of new technology, like electric ovens, in the 20th century meant that it was more reliable to cook in a modern stove than over an open fire. But, there was also the matter of the humaneness of it all- according to some accounts it was the hard service of a spitfire dog which prompted Henry Berg to later found the ASPCA in 1866.

Because of the modern stove and the concerns over animal cruelty, the bred was allowed to completely die out once there was no more demand for them. We can’t help but wonder what it would be like to have one as a pet today, however impossible that may be. It has been said that the closest breed to the turnspit are the corgis which are, incidentally, beloved by Queen Elizabeth II as her favorite dog breed. History does repeat itself!