Etienne Léopold Trouvelot (1827-1895) studied common astrological phenomenon which people could plainly see with the naked eye. But, long before NASA he also studied with a telescope the finer workings of the heavens and some of his stunning depictions of space survive today. 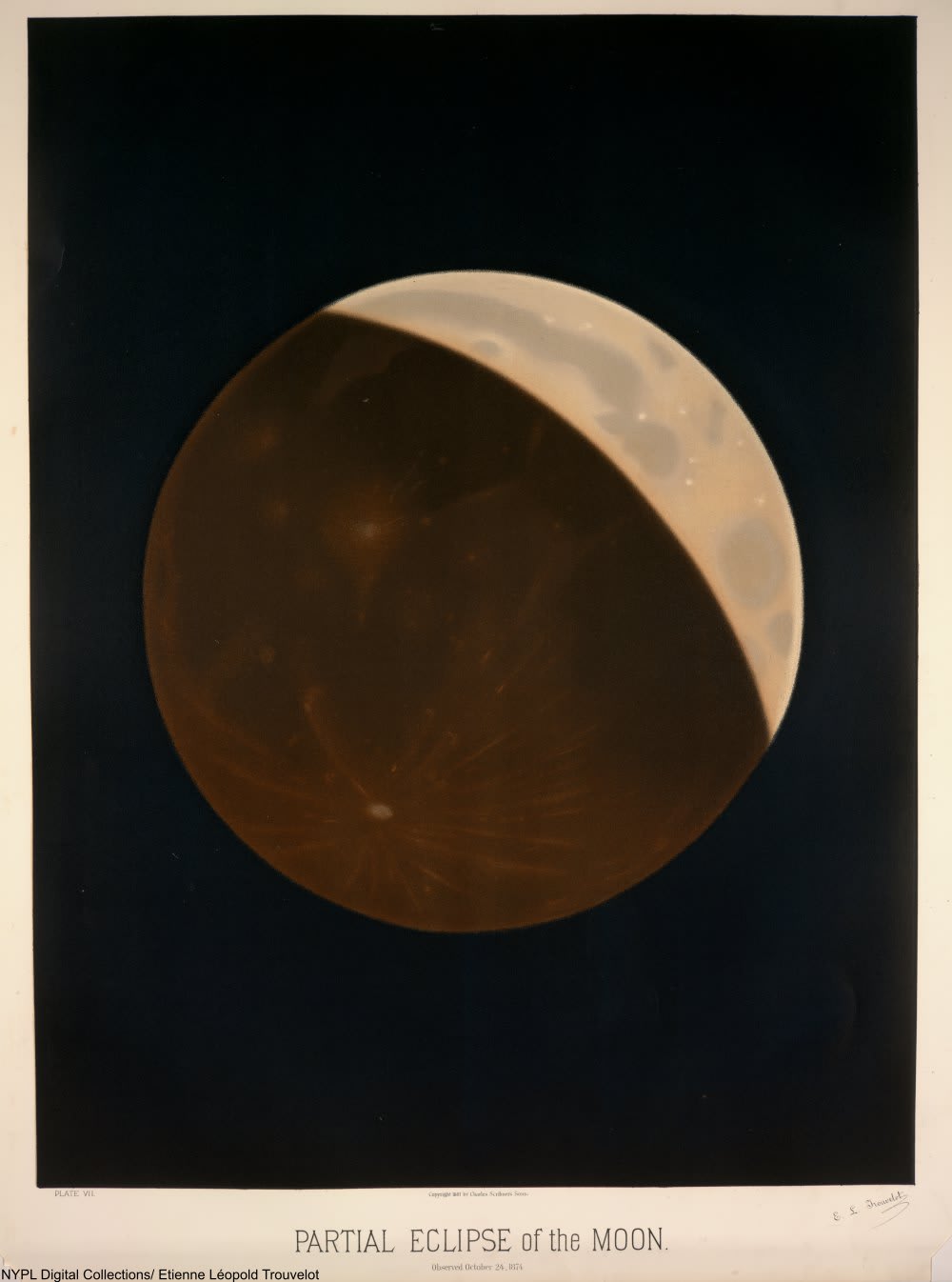 Partial eclipse of the moon. Via/ NYPL

Trouvelot was born in 1837 in Aisne, France, during a period of economic depression at the end of the Bourbon Restoration. By the time Napoleon III had returned to power again in the 1850s, Trouvelot was ready to leave France altogether. He emigrated to the U.S. in 1855 and settled in Massachusetts, studying both etymology and astrology in his spare time.

As a skilled illustrator, draftsman, and printmaker, Trouvelot created maps and painted colorful images of butterfly species. But, his love of astronomy would soon eclipse his fascination with insects. 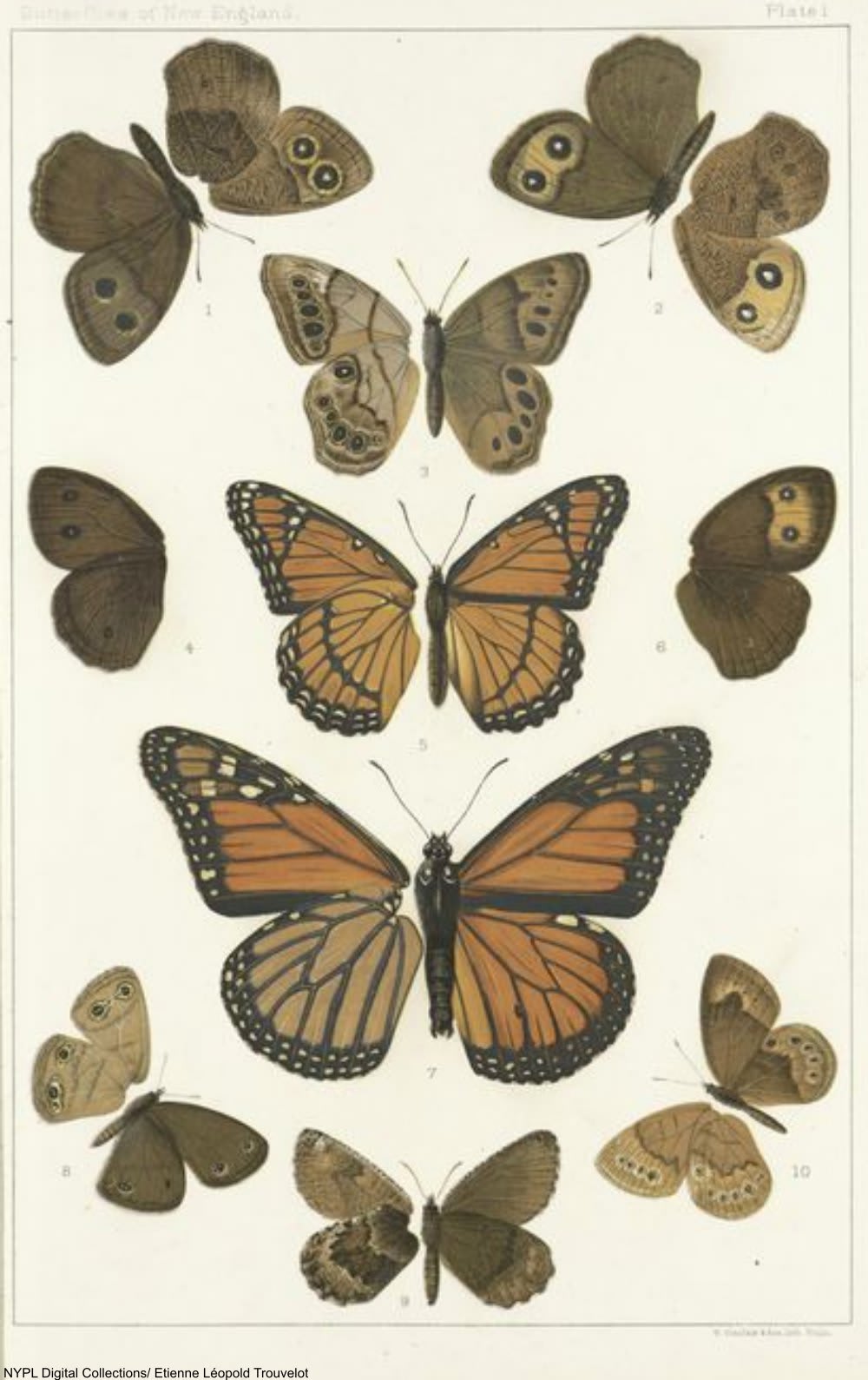 Using a small telescope at his home, Trouvelot painted what he saw through the lens and he depicted these incredible sights with incredible scientific precision. His drawings caught the attention of the director of the Harvard College Observatory, where he was invited to join the faculty in 1872.

With a much more powerful telescope now at his disposal, Trouvelot’s images became even more detailed and were displayed at the very first World’s Fair in Philadelphia in 1876. The intricate scientific drawings were then made into color lithographs, a very painstaking and expensive process for producing high quality prints. 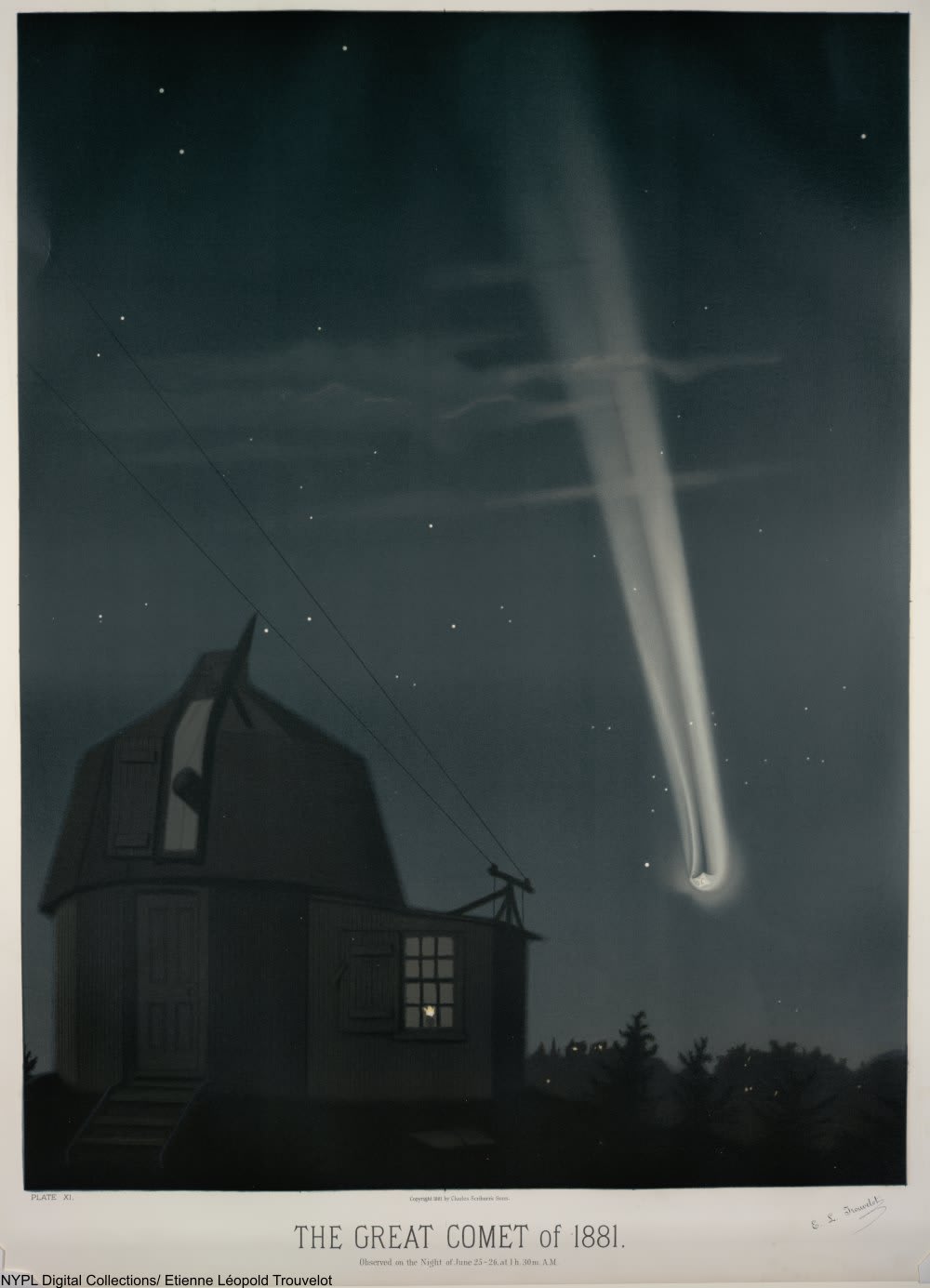 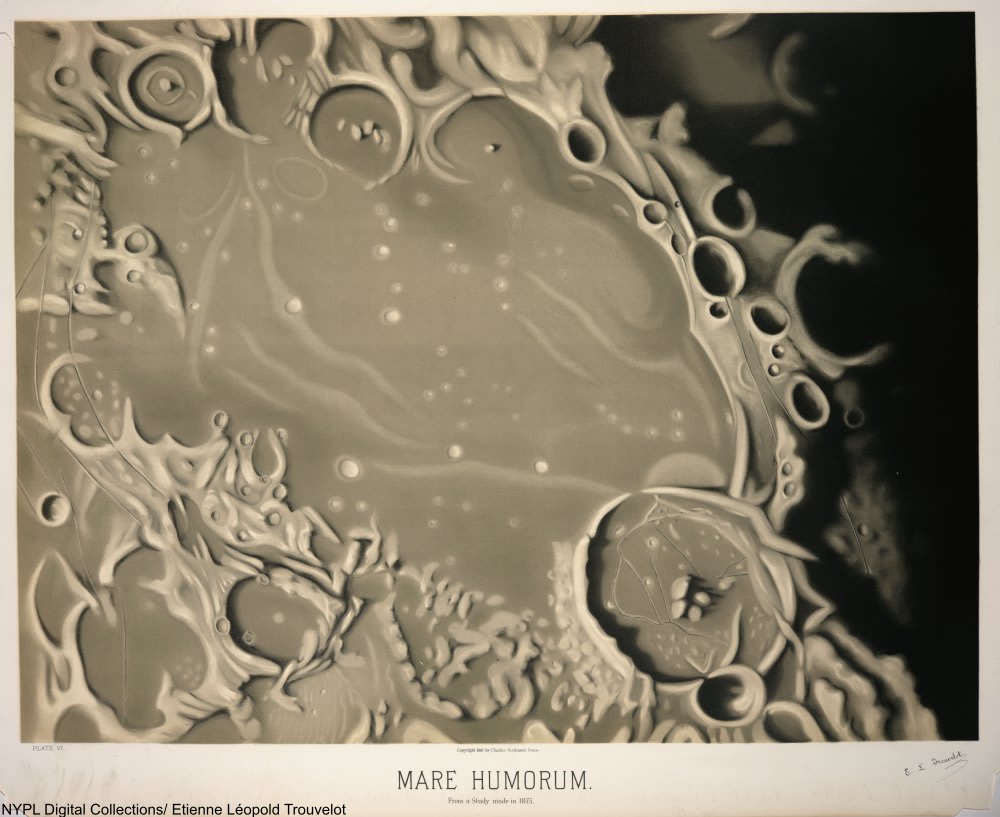 Detail of the surface of the Moon. Via/ NYPL

Trouvelot is said to have produced over 7,000 images of space in his day, but only a select few were printed in the 1881 book, The Trouvelot Astronomical Drawings. 15 color images illuminated the pages of this beautiful and technical book.

At the time photography had yet to overtake scientific drawings as the preferred medium and nighttime photography was still in its infancy. Early 20th century advances in photography meant that within only a few decades, Trouvelot’s work was seen as largely irrelevant. 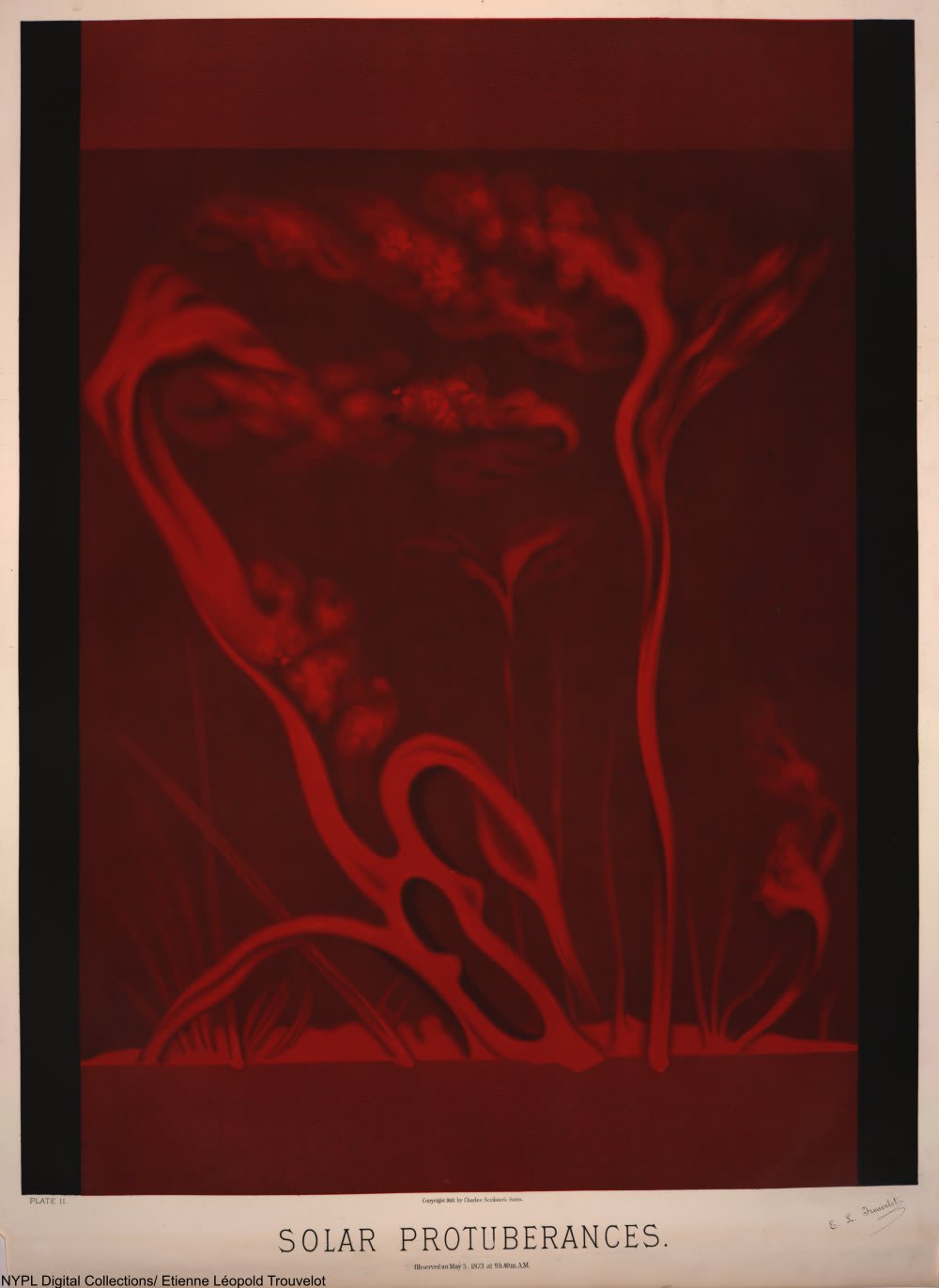 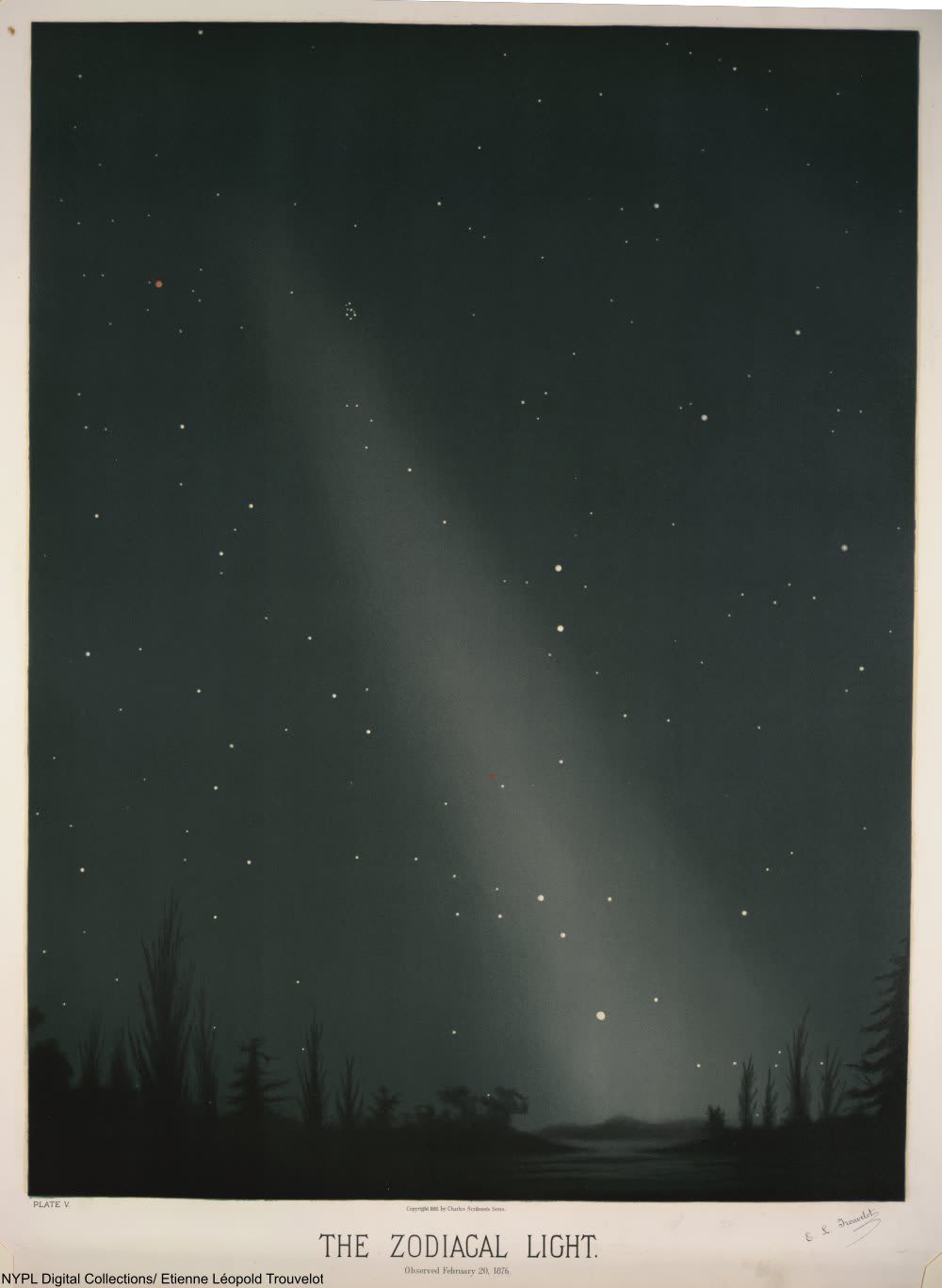 Today this phenomenon is called the zodiacal light and is also known as a false dawn. Via/ NYPL

But, during his lifetime Trouvelot claimed that the well-trained eye could detect slight variations and flutters of light that no machine could capture.

Trouvelot showed the path of various meteors during a meteor shower, mimicking the effect of long exposure photography of the night time sky long before such photography was viable. Today long exposure images of the stars are common, but he was truly ahead of his time in depicting the process of objects moving through the sky in the course of one night. 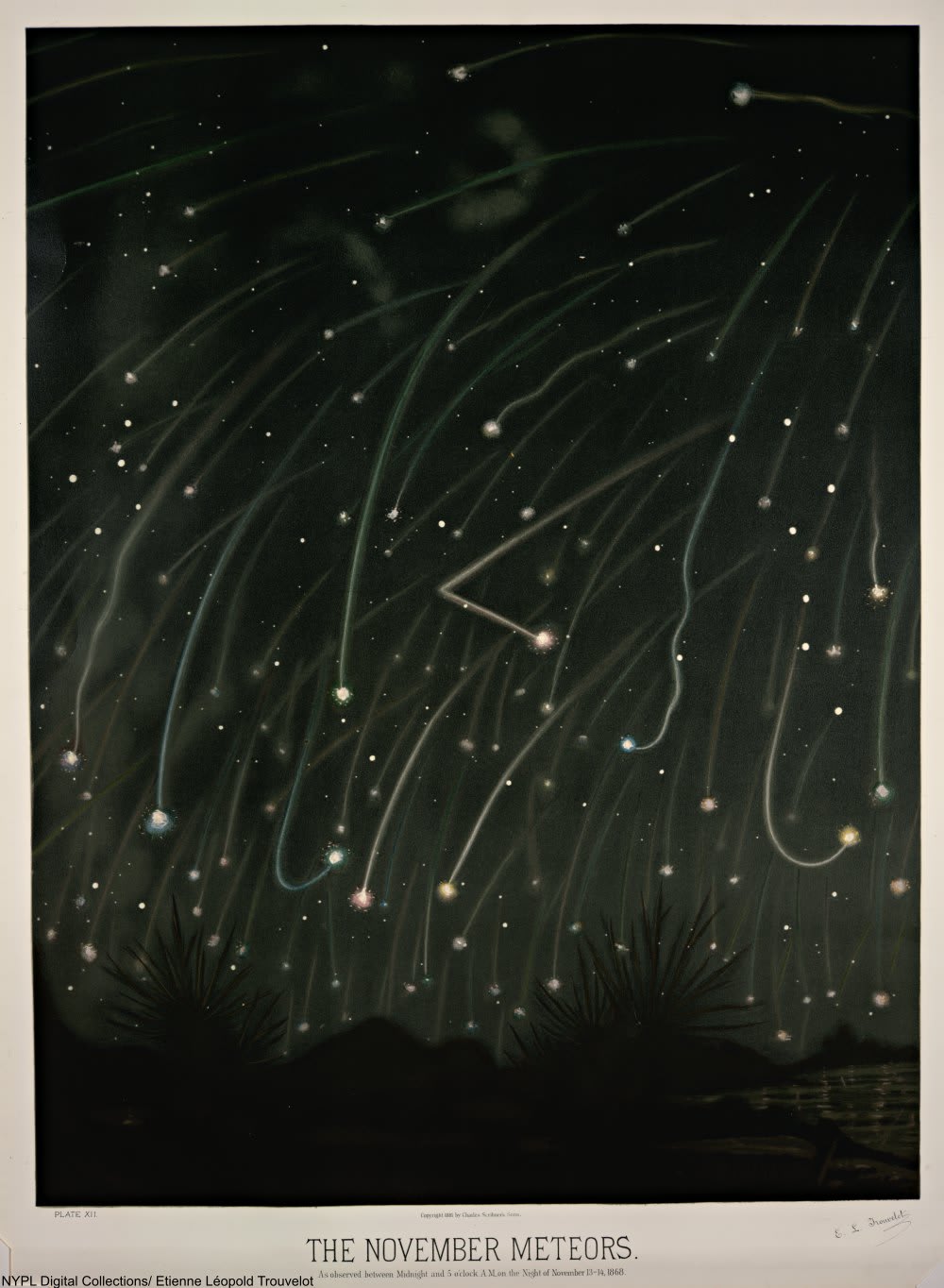 Meteor shower of Nov. 4th, 1868, from midnight to 5 am. This scene embodies the goal of time lapse photography well before it became a reality. Via/ NYPL 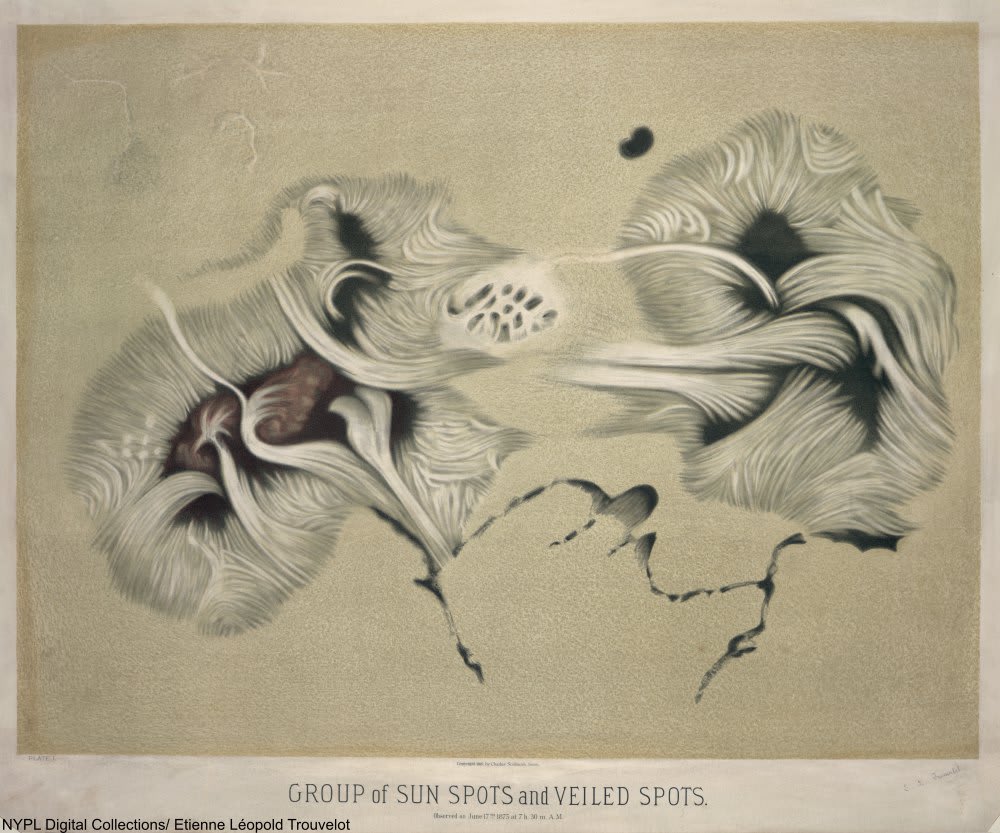 Sun spots and veiled spots, the latter of which Trouvelot was credited with discovering. Via/ NYPL

Trouvelot also has another, less illustrious claim to fame. He was responsible for the spread of the pest gypsy moth in the U.S. Trouvelot had brought some gypsy moth specimens to the U.S. to create a hardier silk-producing moth. At the time there was little-to-no oversight on invasive species, though the escape of his gypsy moths (and the resultant damage they did to local forests) warranted a search and destroy mission on the moths which was finally largely given up on in 1900. Gypsy moths remain a pest for East Coast hardwood trees to this day. 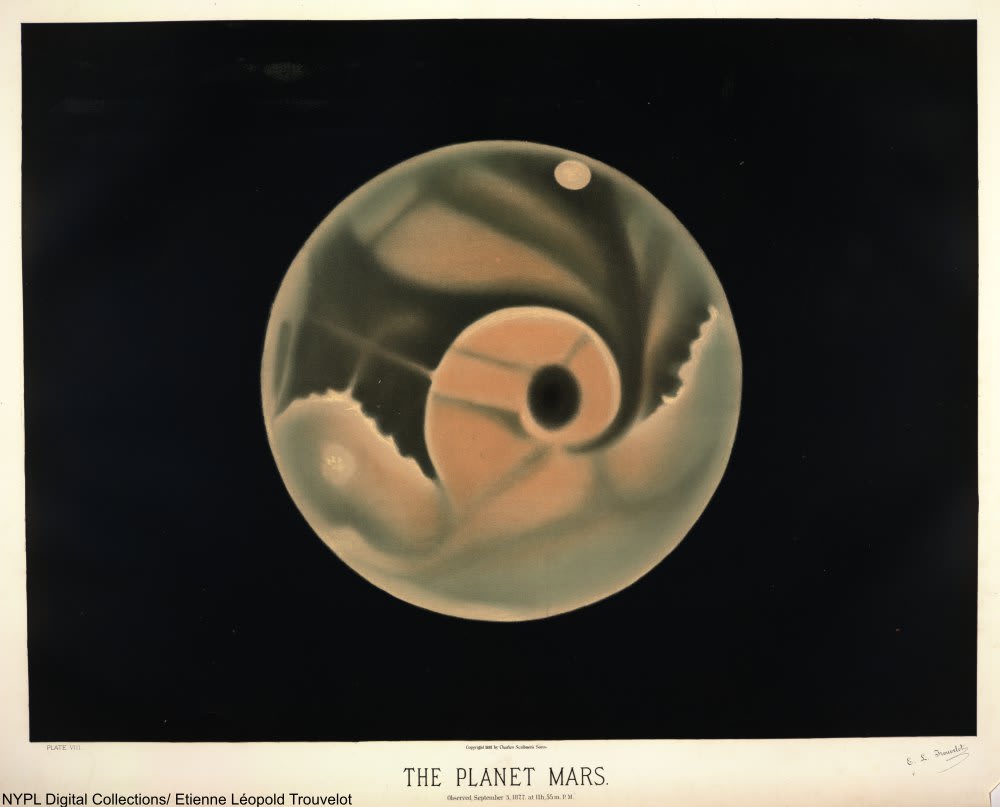 Mars in detail. Via/ NYPL 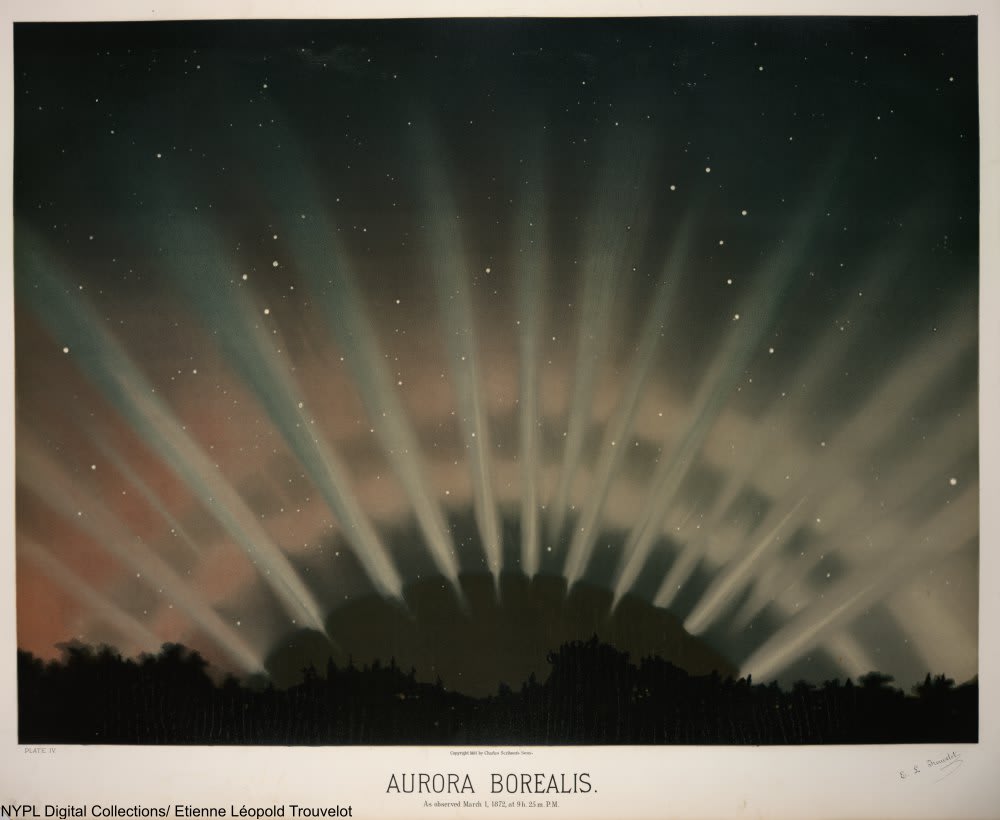 It was after the escape of his moths that Trouvelot dedicated himself to space instead of bugs. His incredible drawings showed the heavens in spectacular detail, the craters of the moon and solar flares, and the Milky Way, as many people had not seen them before. Such was his diligence that a crater on the Moon and one on Mars are named for him in honor of his discovery of their presence. And that is a legacy any scientist would be proud to have.