The Fascinating History of the Tin Can Tourists

The horseless carriage was the newest innovation in travel at the end of the Victorian era, one which would change how we built our cities and where we lived. By 1920 cities and towns across the world had begun to make room for the fast-moving machines, as well as to provide parking and new safety laws to manage them. Around the same time the trailer age began. As cars became more powerful and efficient, they were in turn capable of hauling small trailers. This would become the start of an entire movement which would later encompass the famous Airstream trailers and which evolved into a growing RV market. And, one group was there from the beginning: the Tin Can Tourists. 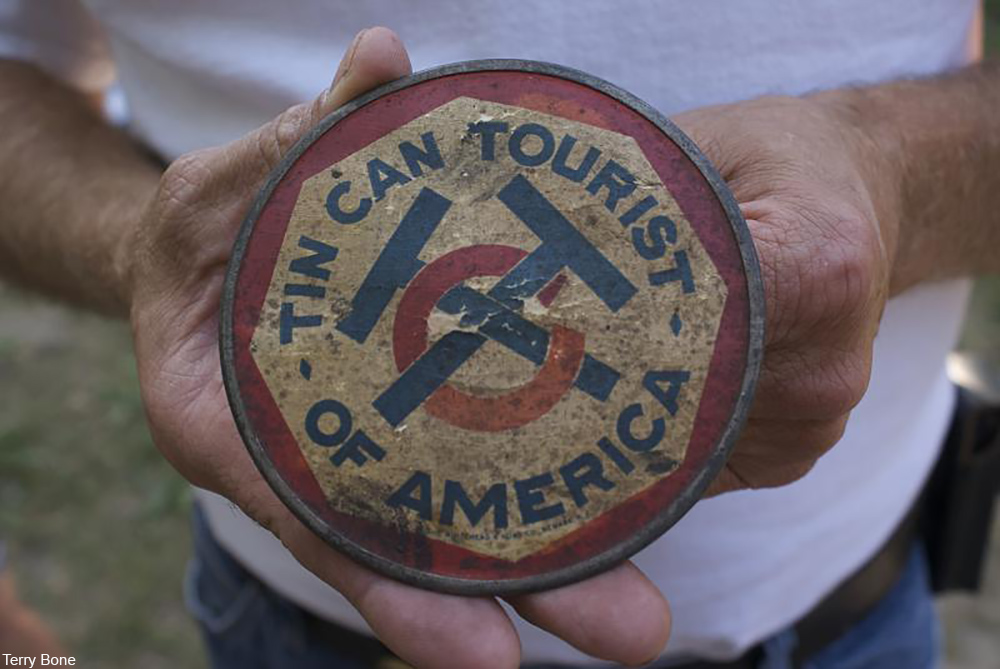 Founded in 1920 the group would not have been able to form sooner even if they had wanted to. One side effect of a changing rapidly from horse and buggy to automobiles was that the roads were not yet suited for long distance car travel. The smooth and pristine highways as we know them today only began in earnest in the 1920s, although a proper interstate system in the U.S. was not completed until 1992! The initiative for the current interstate highway system was enacted in 1956. 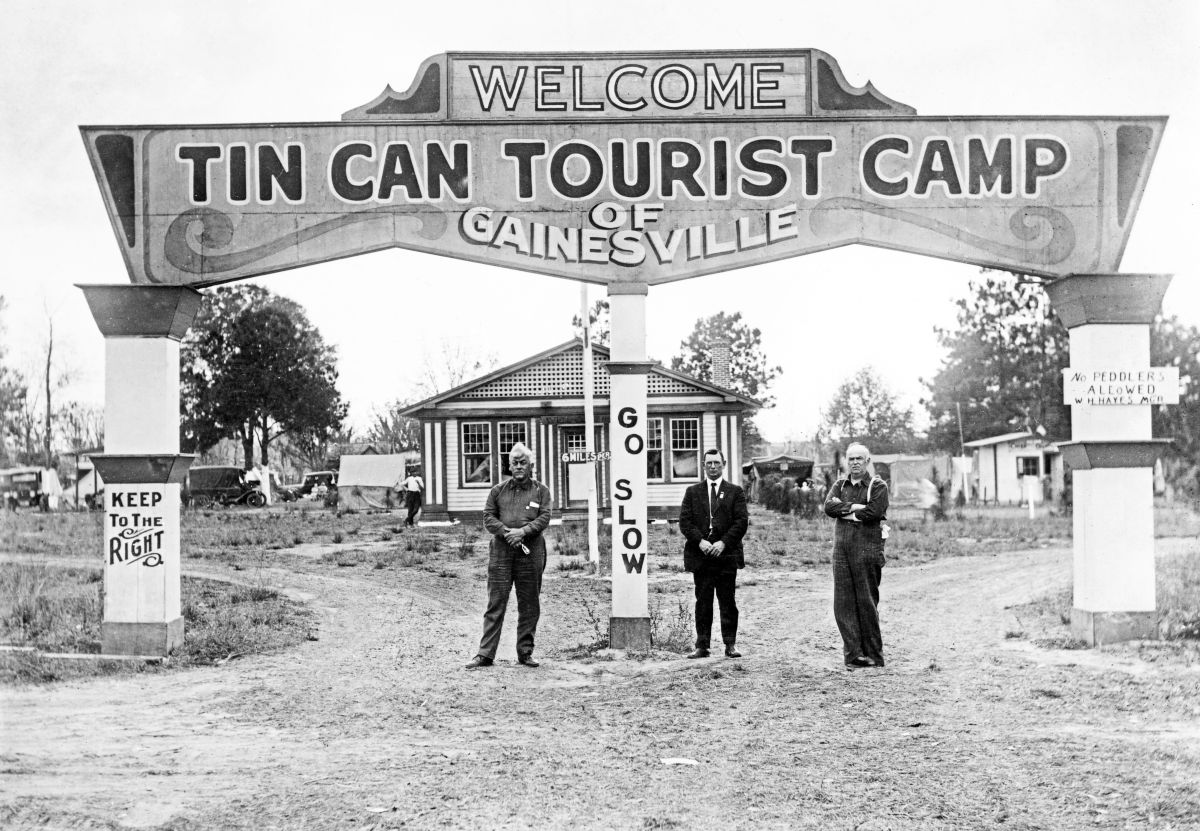 In 1920 there were only a handful of interstate highways, one of which spanned from New York to Florida- a common vacation trail. This led to people using camping trailers in order to make camping easier on their vacations to sunny Florida.

Previous travel arrangements would have entailed either arriving by hired horse-drawn coach or by train, neither of which required a parking spot or a place to camp. Tourists would then stay in a hotel or with relations, excepting those who camped on rural fishing and hunting retreats.

The Tin Can Tourists group was started in 1919 in Desoto Park, Tampa, Florida. The idea behind the club was to create clean and safe parks for members to stay at- something which was not yet a priority for motor tourists. 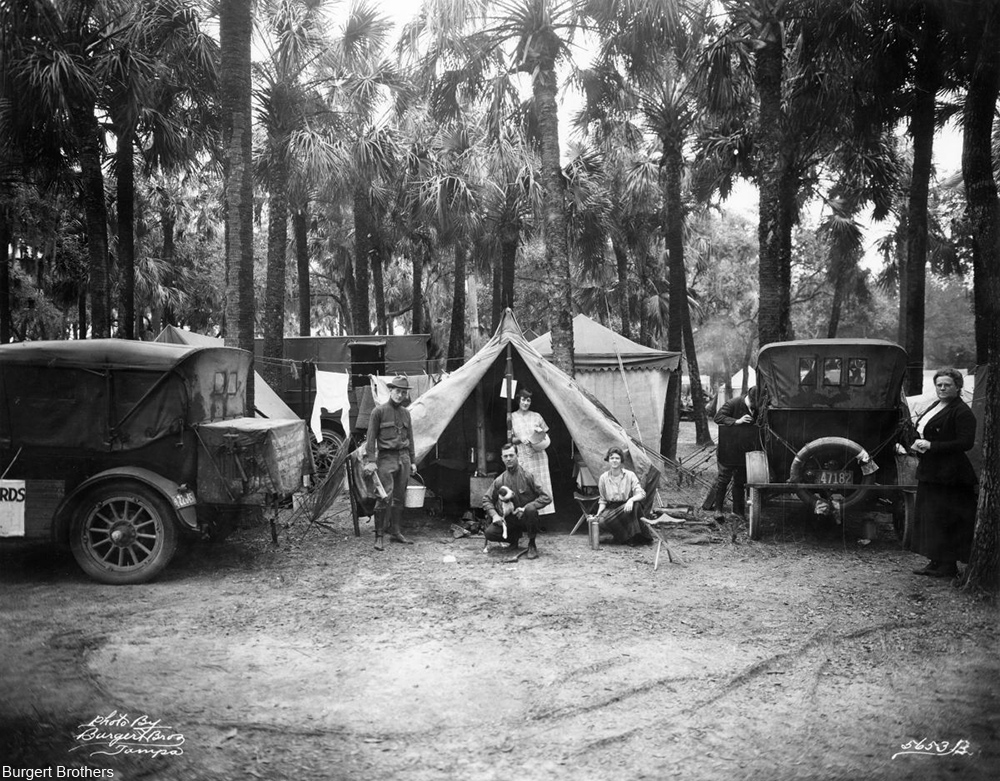 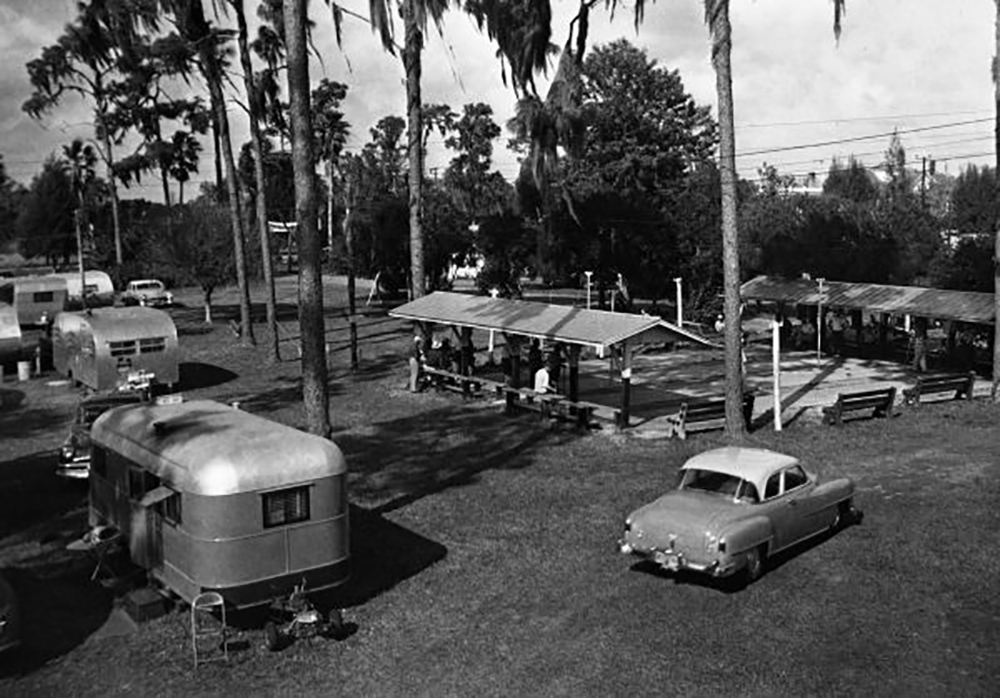 Tin Can Tourist convention in 1953, notice how many shiny trailers there are! Via/ State Archives of Florida 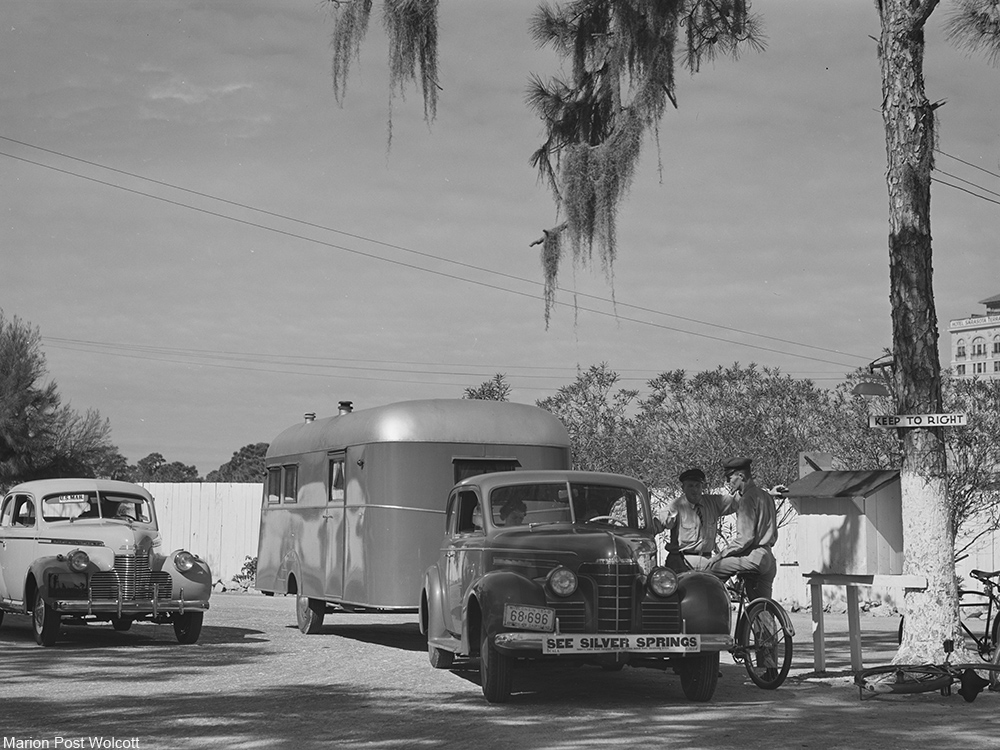 There was a secret handshake, secret sign, and password that only members of the group could know. As car ownership increased in the 1920s, so too did membership in the club. Their club song was “The More We Get Together” and they frequently assembled in large numbers, creating camps and parks that catered to the needs of the trailer traveler. In 1932 estimates of club membership range from 30,000 to as many as 100,000! Their summer and winter conventions, however, were not always welcome. Hundreds of cars (many with trailers and/or tents) all convening in one place was quite the spectacle (and nuisance) in those years. 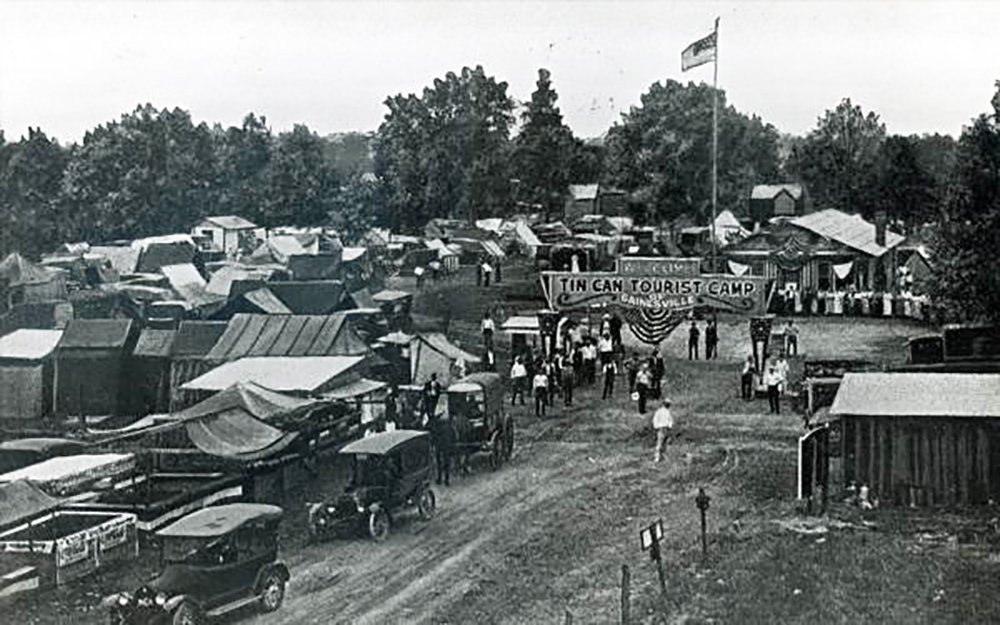 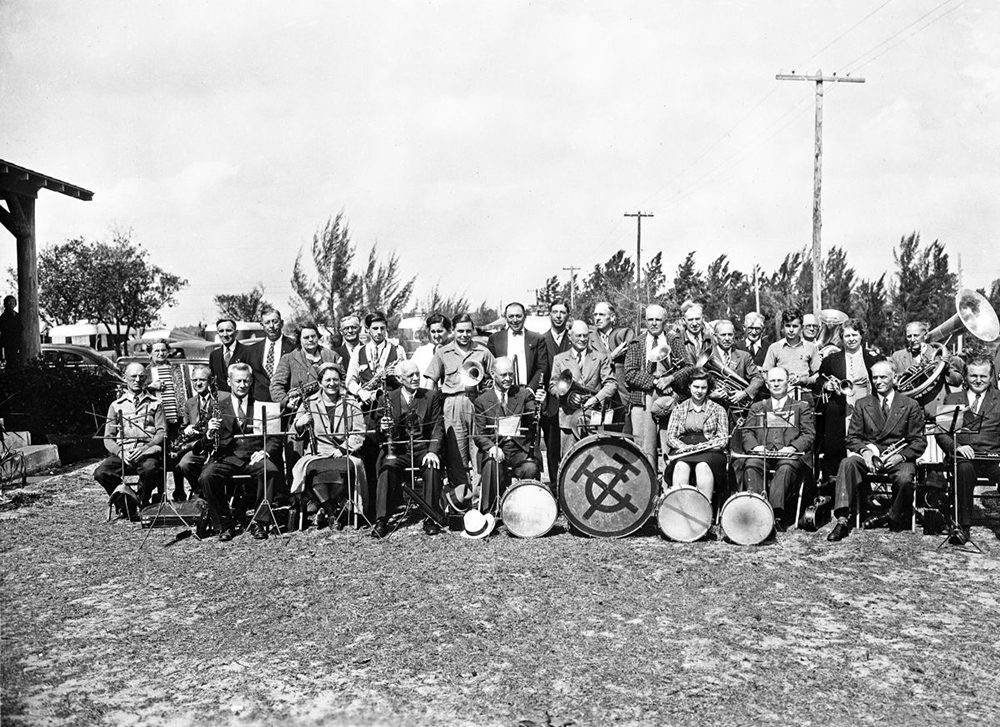 Tin Can Tourist Band, 1940s. Via/ State Archives of Florida 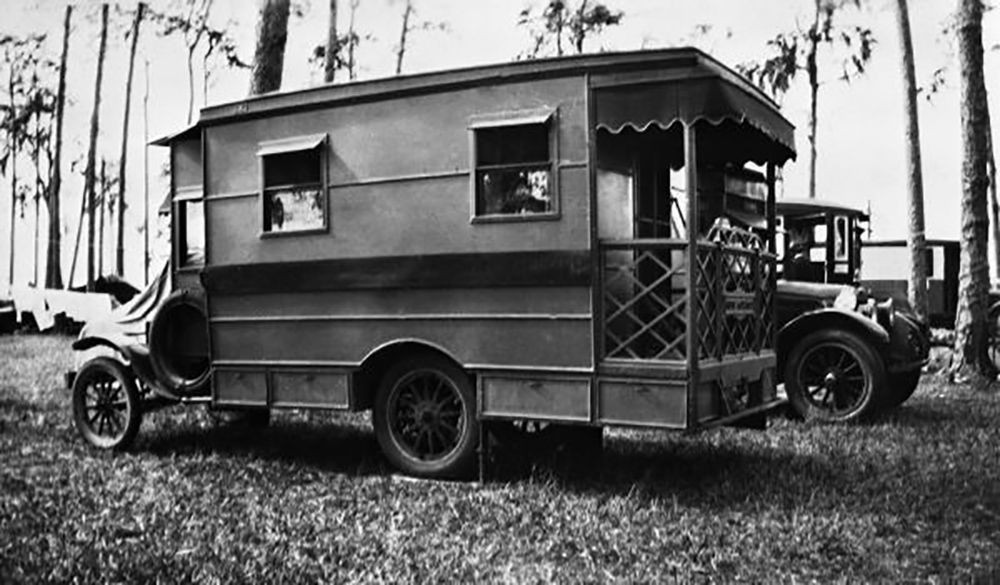 A so-called “housecar” in 1929. Via/ State Archives of Florida

The club endured, however, after some venue rearrangements, just in time to see the decline of the organization firstly due to the Great Depression, and then by the gas rationing and metal shortages of World War II. However, an even bigger source of hardship came from rival club, Automobile Tourists Association, which drew in members which would have previously only had one club to be a part of. By the 1960s the Tin Can Tourists club was flagging and they held one last convention in 1968. 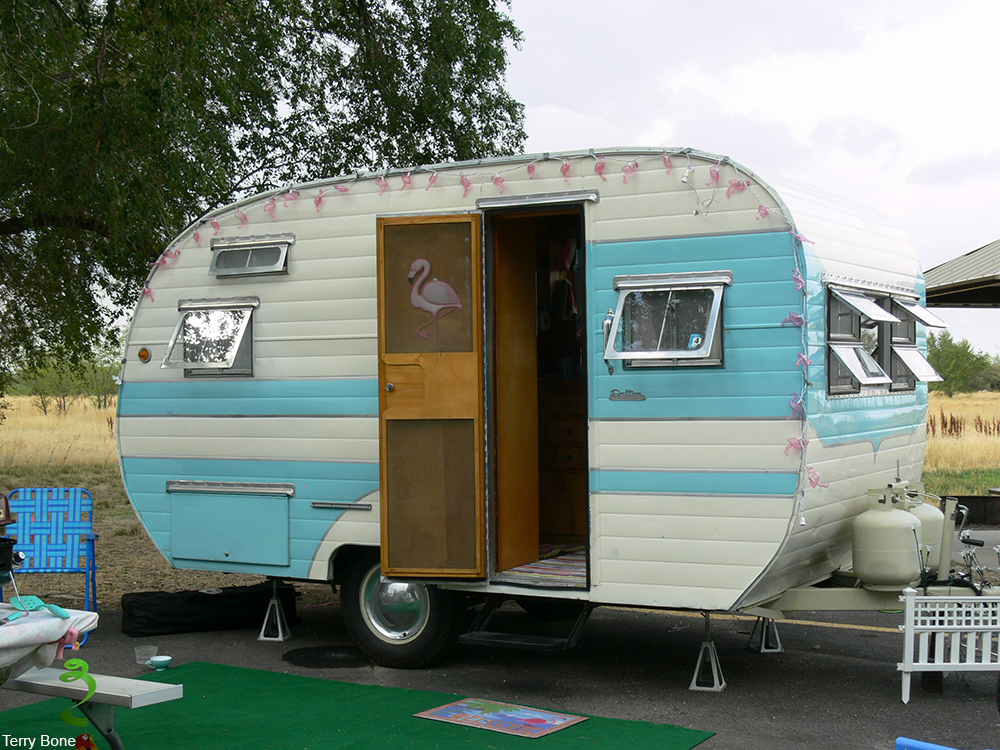 In 1998 the club got a reboot as an all-vintage car and trailer group which meets in Michigan for regular Gatherings. This required a new registration of the name since it had not officially been in use for some time. The club is open to all who appreciate vintage cars and campers, even if you don’t own any!