We might not give much thought to the money people are making when they serve us, but if we don’t pay attention to it, we may not tip them appropriately. A bartender in Texas is shedding light on the subject by sharing a video on TikTok about the small size of her paycheck.

A video was uploaded by Aaliyah Cortez and it gives some information to those who look at it. “So this is why you should always tip your bartenders and servers, anyone who waits on you or provides a service for you,” she said.

Cortez had worked 70 hours and only gets $2.13 per hour. After federal taxes takes a bite along with Medicare and Social Security, she got a $9.28 paycheck for 70 hours of work.

“Of course, I got tips, but this is what I got for my hourly,” Cortez said. “This is why you tip.” 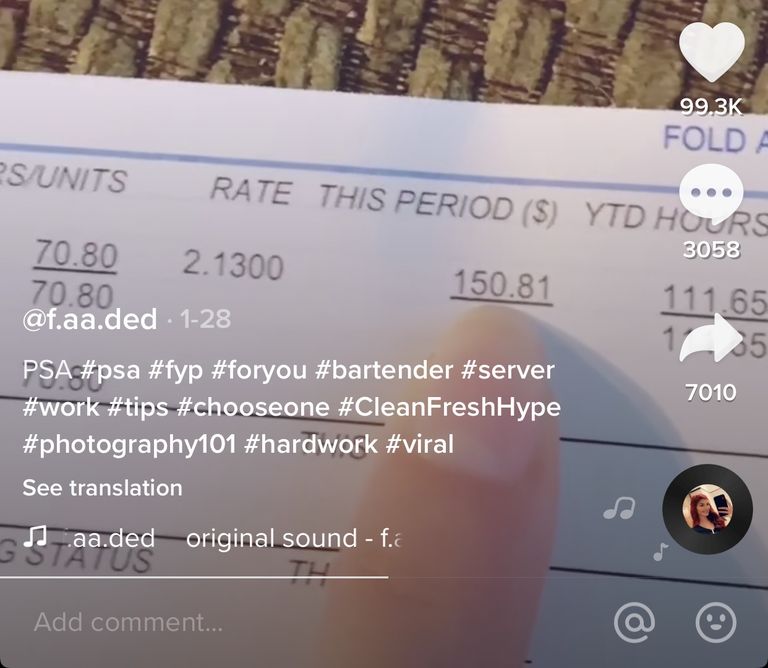 Cortez also gave an interview to BuzFeed, saying that she posted the video to let other people know about the low pay to employees in the service industry. $2.13 an hour is allowable by some states in the United States if the employee receives tips. Those tips have to make up at least the minimum wage of $7.25 per hour. You can see how their take-home pay can be so low.

“It’s not right that we have to do this, but I wanted to shed some light on the issue and inform the public about the importance of tipping,” Cortez said.

There were some comments about people getting a lot of tips but Cortez responded to let them know that not everybody is a big tipper and some don’t even leave a tip.

“I would like to see the system change who pays our wages,” she told The Daily Mail. “Obviously, it should be our employers, but until that can happen we still have to rely on the generosity of our customers.”

A follow-up was uploaded to TikTok to express her appreciation for everyone who listened. “I owe it to you guys. Thank you,” she said.