Brittney and Kody Frysinger wanted to do something interesting for their engagement pictures. At first, it started out with a simple request. Lindsey Berger, the wedding photographer was asked if a photo could be re-created that Brittney had seen on Facebook.

The engaged couple were posing together but the picture also included Mitch Jolliff, the groom’s best friend. They wanted to have him along as the third wheel. Berger then used Photoshop to put the writing on the bottom of their boots.

“We’ve been friends for seven years now since we were in high school,” Kody tells Yahoo Style about his bond with Mitch. “Every single day, we’re in touch or with each other. Always together, always doing stuff together.”

Kody met Mitch in high school and he also started dating Brittney around the same time. Needless to say, they spent a lot of time together. Kody and Brittney thought it was a good idea to highlight the time they spent together but Mitch wasn’t on board at first.

“At first, I was not a big fan of it,” Mitch tells Yahoo. “They actually had to persuade me quite a bit to take the pictures. I’m not a big picture taker.” 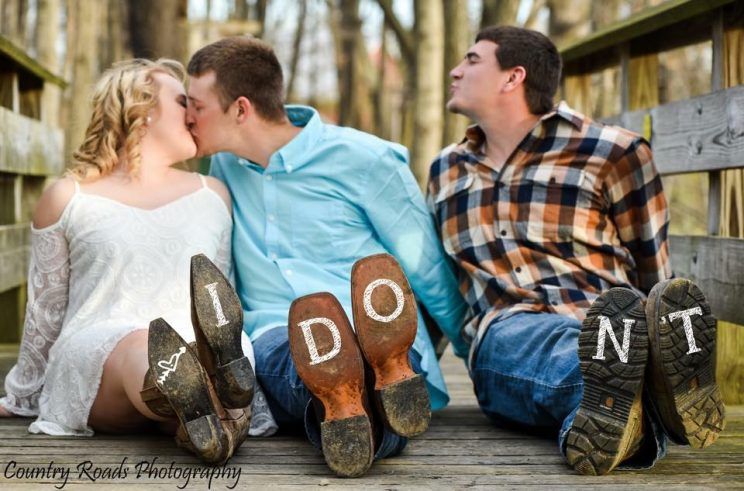 The pictures went over so well that a follow-up session was planned. Brittney’s boots say, “I won,” while Mitch’s says, “Shut up.”

Berger told Yahoo that “it was magic. It was perfect.” Even though that was the case, a photographer from a small Ohio town did not expect the viral explosion of the pictures. After being posted, she woke up from a nap to 300 shares.

“I think it’s so relatable,” Brittney says of the image. “Everybody has that friend who third-wheels with you, who’s always there.”

Many people who commented are from other couples planning weddings and tagging their third wheel friends as a joke. Berger doesn’t think that this is a photo that would work for everyone.

“[The photographer] absolutely needs to know who they’re working with and make them feel as comfortable as possible,” she says. “They have to 100 percent nail the picture, or it’s not going have the same effect. Whoever that best friend is, they are the star of the show. They have to be as authentic as possible.” 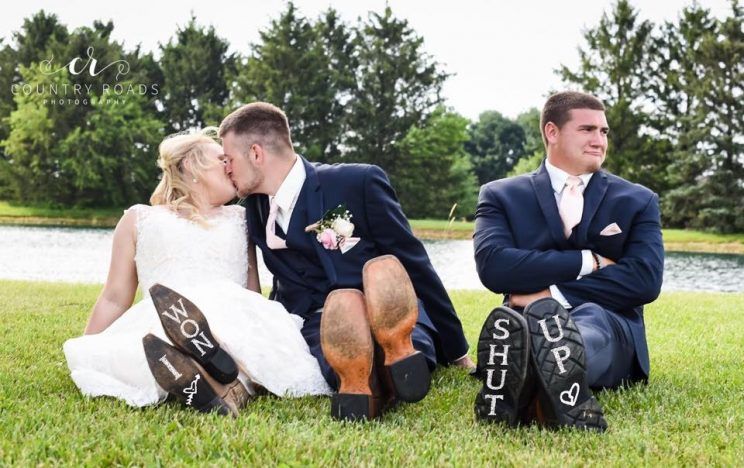 Since the picture was posted, the newlyweds, Mitch and his girlfriend (Bree) have been on a group text together. They are enjoying the attention while they are honeymooning and Berger is receiving offers to photograph weddings from distant locations, including Australia.

Mitch is concerned that he may get paid back one day. “I’m sure when my girlfriend and I get married, he owes me some favors in photo shoots,” he says. “In good time.”