That $75 Costco Coupon That’s Gone Viral Is Not Real

We’ve all heard the saying, “If it seems too good to be true, then it probably is”. That quote is definitely true in regards to a coupon that’s been floating around Facebook recently claiming to give people $75 off their purchase.

I just saw the coupon the other day, but some users have seen it in their newsfeeds for a while now.

It’s gotten so out of hand that Costco had to let people know that it was a fake:

“Despite several posts out there, Costco is NOT giving away $75 coupons,” the post read. “While we love our fans and our members, this offer is a SCAM, and in no way affiliated with Costco. Thanks to our fans for letting us know about this recurring hoax!” 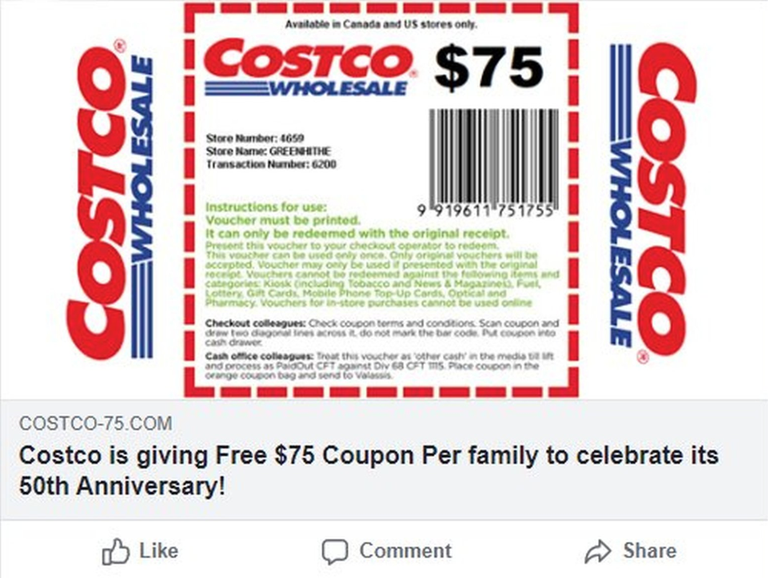 People in the comments made note that the deal was supposed to be $75 off to celebrate Costco’s 50th anniversary.

It turns out that Costo hasn’t even been around for 50 years, so it’s a dead giveaway that it’s a sham.

“I knew it was a scam, as Costco would not say to celebrate ‘it’s’ anniversary. Correct would be “its”, as in possession. and the same goes for the Jet Blue ad giving out free tickets for ‘it’s’ anniversary. Don’t they know it’s mean it is?!?!” another wrote.