The Fascinating Transcontinental History of the Teddy Bear

Some of our very favorite toys over the years have been teddy bears, even as adults! But, this toy was once a novelty, unknown to the world at large. Within a short time teddy bears ended up sparking a trend for stuffed toys that changed the way kids played. Since the early 1900s many stories have popped up about how stuffed bears became so popular. While these cute little creatures are now universally beloved, their histories start around the same time in two different parts of the world. 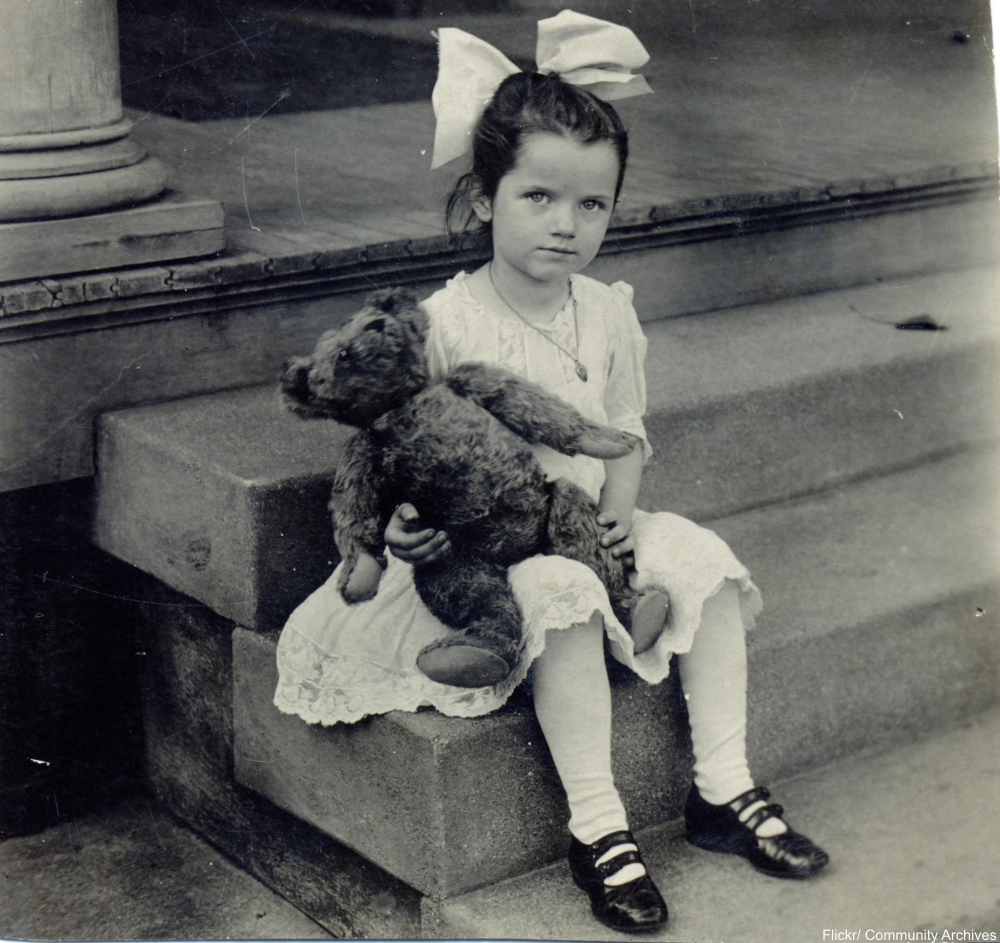 What started out as a pin cushion would grow into one of the most beloved of all children’s toys. German businesswoman Margarite Steiff was stricken with polio early in life, but still received an education thanks to her siblings faithfully loading her into a hay cart and taking her to school everyday as she could not use her legs freely. Steiff’s right arm was also affected, though this did not stop her from learning to sew and eventually running a tailor shop. 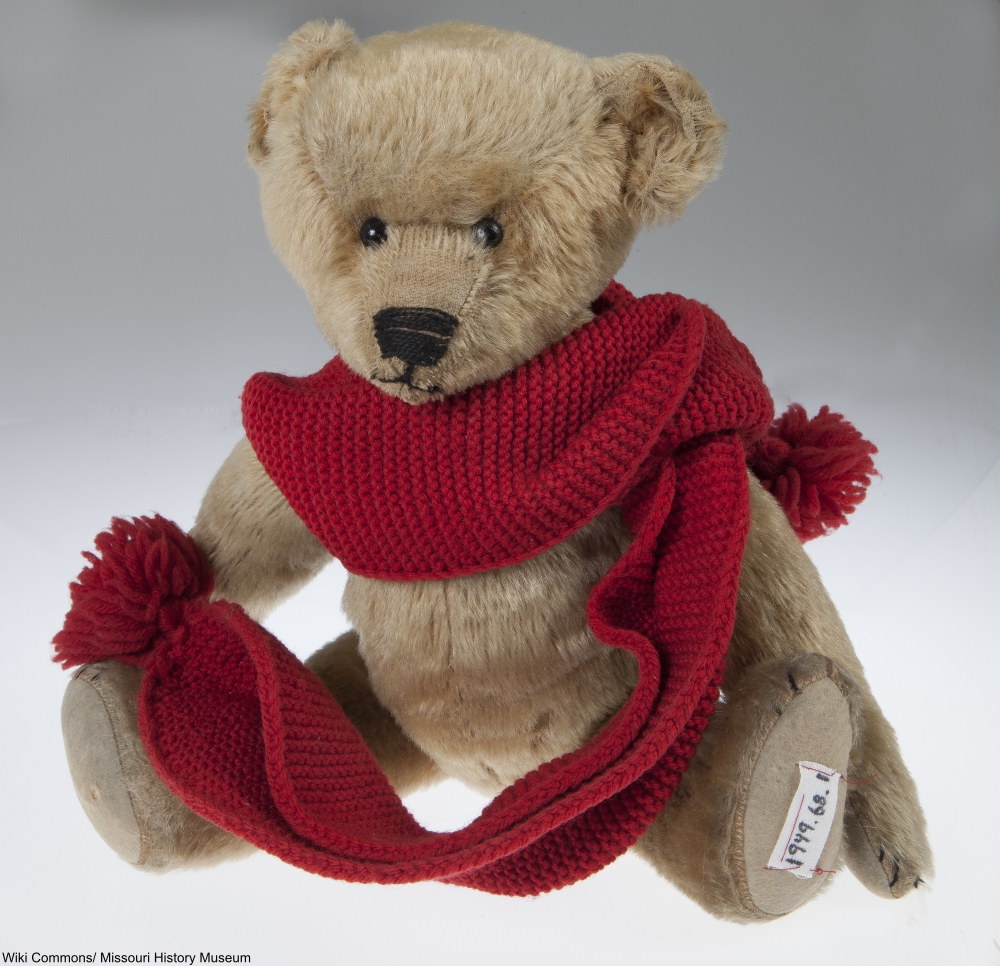 One day Steiff decided to make a small elephant pin cushion that had been featured in a ladies’ magazine. When presented to her customers, she was surprised to find afterwards that their children were going wild for the stuffed elephant “toys.” 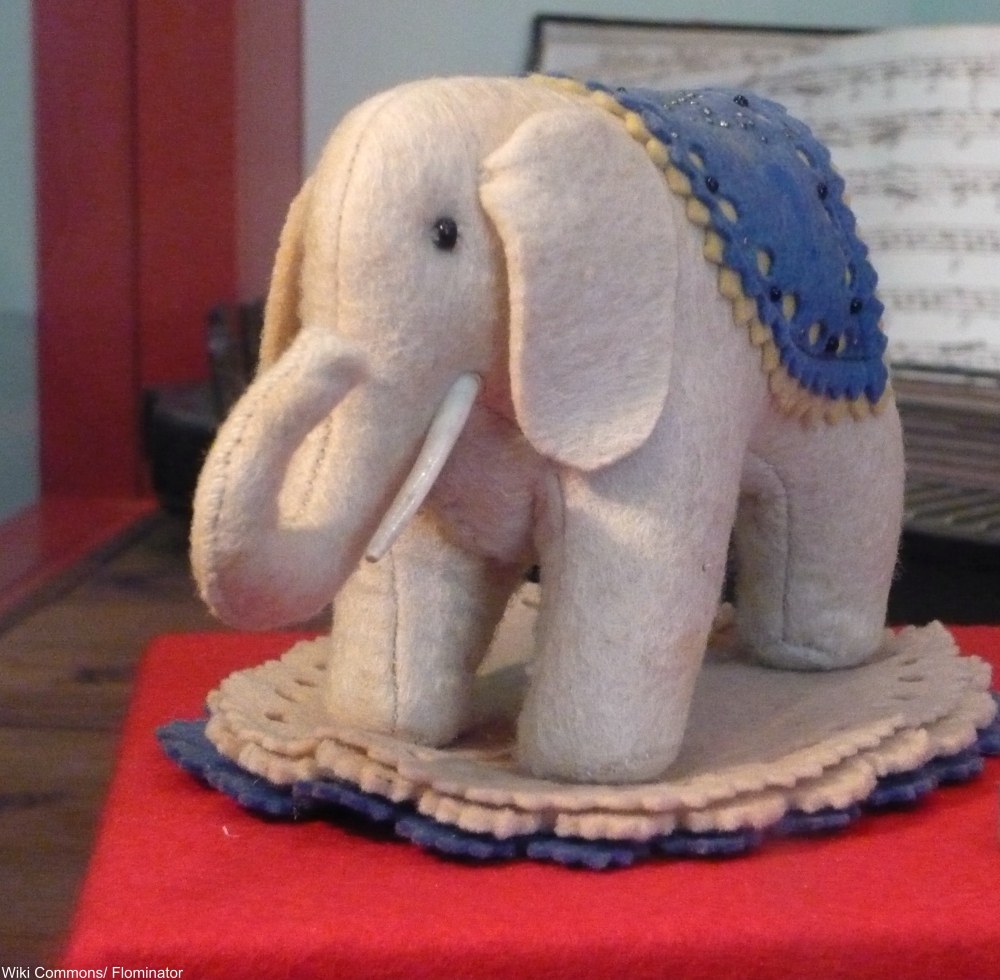 Elephant pin cushion made by Margarite Steiff. Via/ Wiki Commons

Soon Steiff was creating other stuffed animals in her workshop, which was growing and in 1880 her company was made official. 7 years later her nephew joined the company and put forth the idea of selling toy bears. At the Leipzig toy trade fair in 1903 the plush mohair articulated bears were noticed by American wholesaler, George Borgfeldt, and soon imported to the U.S. They weren’t called teddy bears yet in Germany, but the Steiff bears caused a sensation in the U.S. as well as in Germany.

In 1902 President Theodore Roosevelt went on a hunting trip at the invitation of Mississippi Governor Andrew Longino that yielded a bear for every other member of his hunting party except the POTUS, leaving Roosevelt with no trophy for his efforts. Feeling bad about that, his guide, Holt Collier, found an old bear by tracking it with hunting dogs. Collier tied the now-injured old bear to a tree and led Roosevelt to the tree, claiming that he could now say he’d shot a bear on this hunting trip. 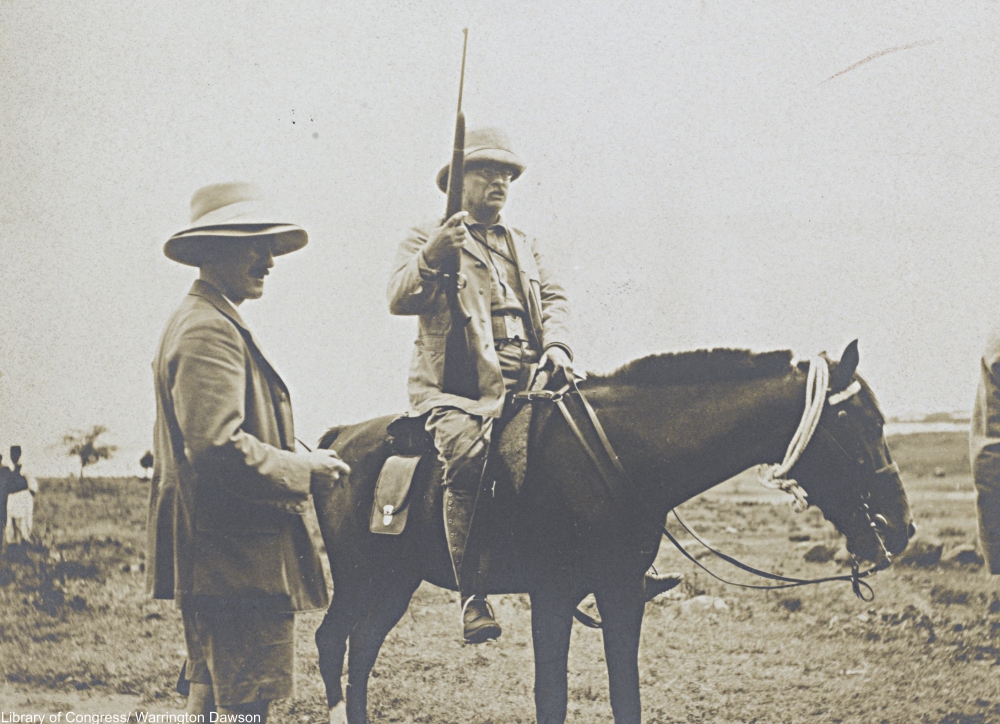 Roosevelt in 1910. Via/ Library of Congress

Disgusted by the lack of sportsmanship inherent to shooting a wounded and tethered animal for sport, Roosevelt reportedly ordered that injured the bear be put down, but that he would not do it and Collier had kill the bear with his knife. The story made the papers and soon there were numerous political cartoons about the event, each portraying the tethered bear in different ways, some most distinctly showing the bear to be a cute and cuddly cub. 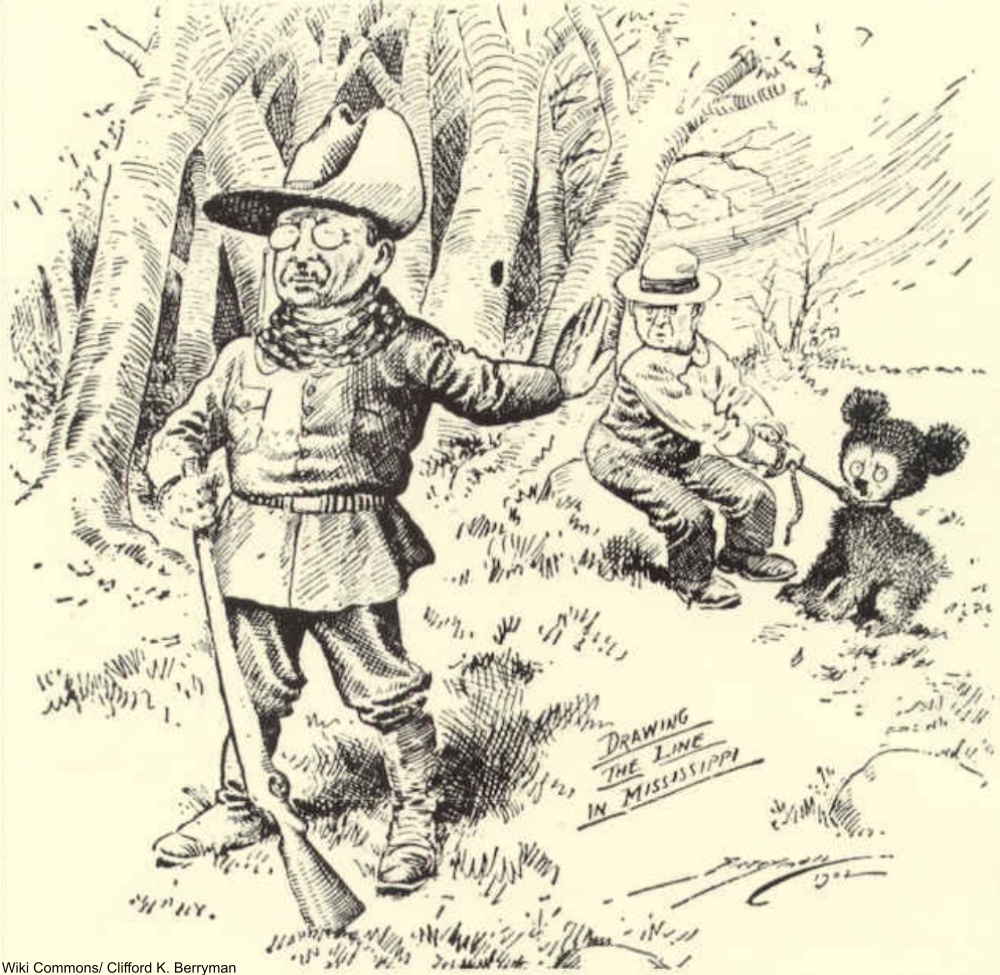 A small stationary and sweets shop owner, Morris Mitchom and his wife, Rose, began to sell stuffed velveteen bears soon after, with the original idea for a pair of “Teddy’s bears” hitting Rose one night after hearing of Roosevelt’s hunting trip.

The bears were placed on display in their shop the next morning to great interest from their customers. The Mitchoms reportedly sent one of those first bears to the President with a letter asking for permission to use “Teddy” in the naming of their bears. When he consented they sold their bears in their shop, eventually leaving the their old business altogether and focusing on toys with the creation of their Ideal Toy Company. 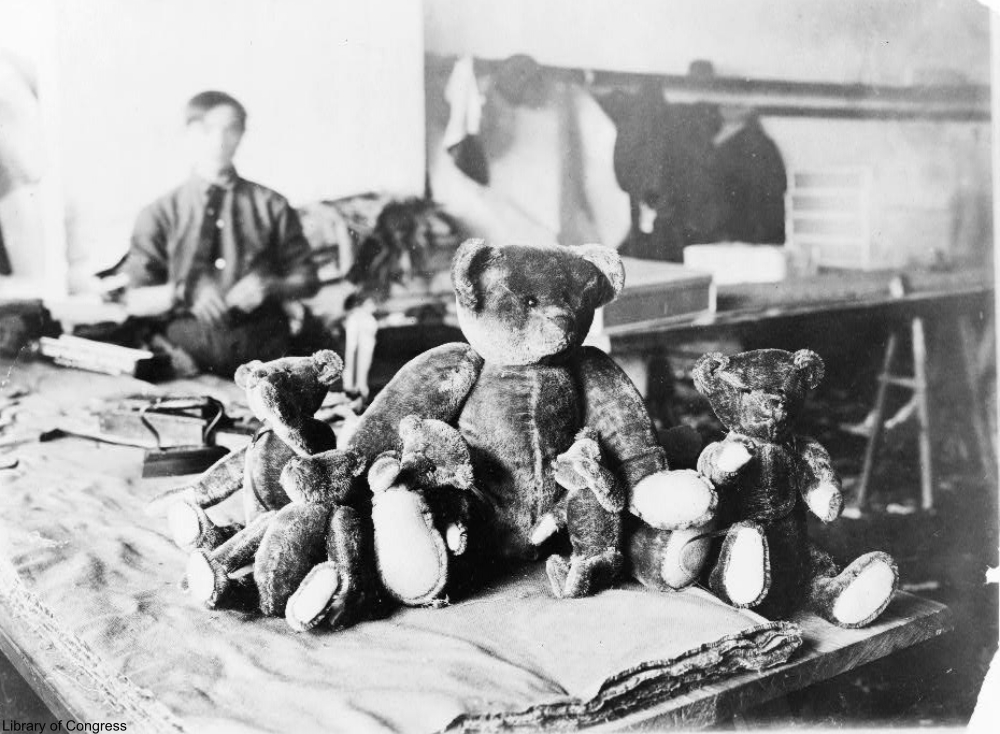 An American teddy bear factory in 1915. Via/ Library of Congress

Roosevelt used the teddy bears in his 1904 campaign as a symbol of the Republican party and their popularity grew within the U.S. very quickly. The American market for teddy bears was initially fed by both the German supplier Steiff as well as by American toy company Ideal. By World War I, teddy bears were common gifts requested and received at Christmas, though it would be some years before teddy bears were found in nearly every child’s bedroom. Ideal would later produce the famous Toni doll among many other wonderful toys.

The popularity of stuffed animals grew to such proportions that every kind of animal (real and imaginary) eventually would be made into a stuffed toy, from unicorns to porcupines! Though they have very different stories, the Steiff and Ideal bears both helped to create a childhood institution in our treasured teddy bears. 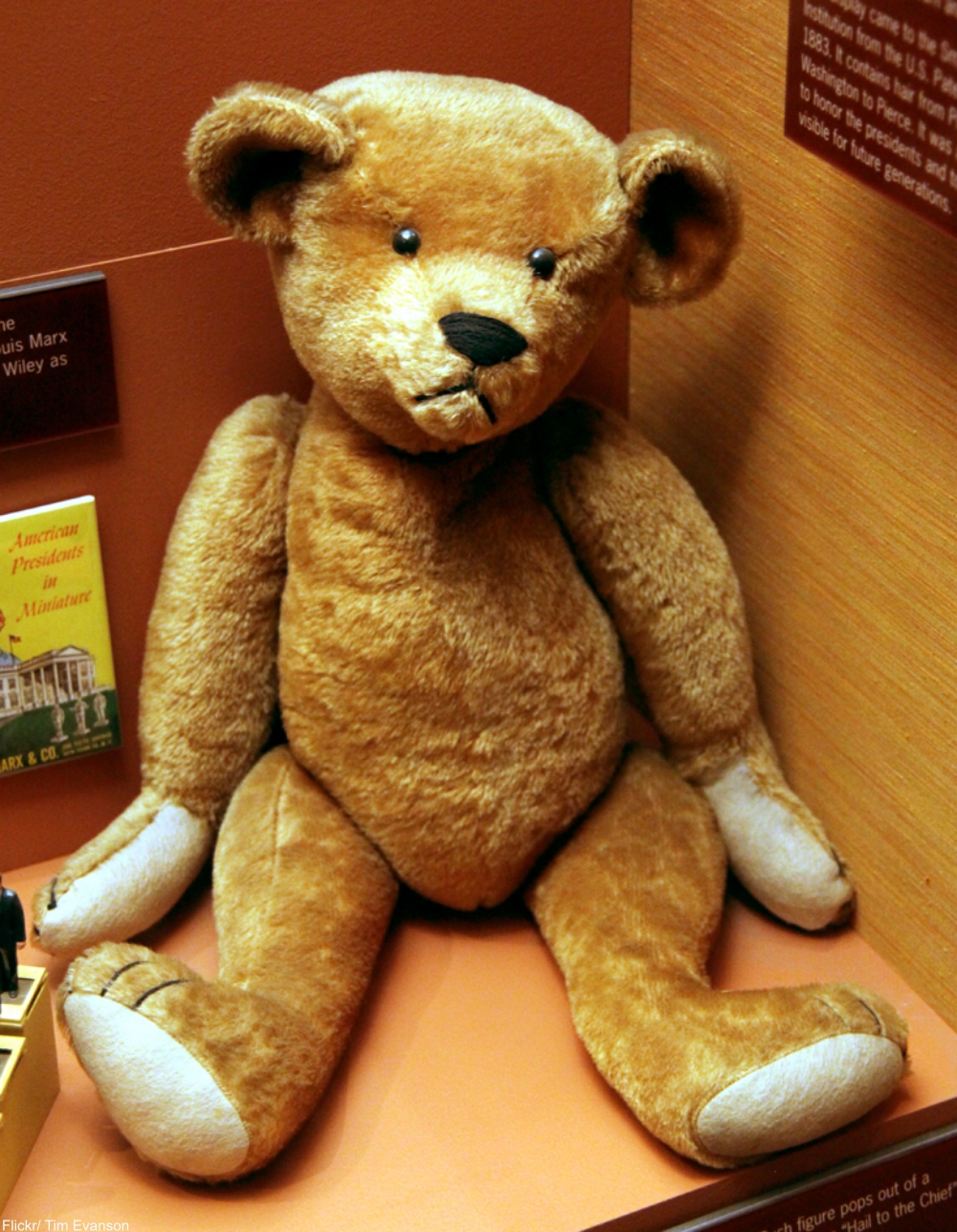 There are quite a few fakes out there, so be weary of any bear that is labeled as turn-of-the-century but has plastic eyes or soft stuffing: early teddy bears often had button or glass eyes and wood shavings for stuffing.

If you can’t get enough of bears then click “Next Page” to find out the real history of Winnie the Pooh and to see the original bear!