Why Starbucks Spells Your Name Wrong All The Time

Aside from having strange cup size names, the next thing that Starbucks seems to be notoriously well known for, is its inability to get its customers’ names right. The coffee chain is so infamous at this point, that it’s practically been written into the lore of pop culture, with various comedy sketches suggesting that they do it on purpose.

For anyone that doesn’t have an incredibly common name, ordering a Starbucks coffee can be a little bit like playing Russian Roulette. Will they get it right? Or will they completely butcher it? Let’s find out when we pick it up at the counter. But usually, when it does get called out wrong, there’s always a bit of confusion at the pick-up station that ensues.

That’s why sometimes – if you pay close attention to those ordering – you can spot the people with difficult names trying to spell them out or give super easy nicknames in order to avoid the embarrassment. Sometimes, they’ll even give fake names altogether. But that has its own set of problems. I mean, who here hasn’t forgotten a fake name in Starbucks on occasion, a show of hands, please.

“My name is Kun. Just like fun with a ‘K,’” said Kun Yang, a resident of New York City. “That’s how my friends introduce me. I use a fake name because I have a name that unfortunately sounds very much like the ‘C’ word.”

Yang added, “Even when baristas get the spelling [of my name] right, no one can pronounce it correctly, or refuse to yell it out loud. Most of them read it however they like, and I always miss my order. It’s frustrating.”

Yang has now taken to really embracing the fake name and give the baristas the order name of Superstar, which she says never fails to get a laugh. But the best thing about her unique fake name is that it’s never misspelled in the process.

Yang isn’t alone in this struggle. As it turns out, even the most popular of sports personalities who have half a million Twitter followers will often face the same issue when going to Starbucks.

I give a fake name at Starbucks. Always try to pick something that couldn’t possibly sound like it’s my name. Today I was Barbara #ThugLife

So the million-dollar question remains, are the baristas doing it on purpose? Not entirely.

A spokesperson for the Starbucks chain has said, “We have never asked or directed any of our partners to misspell names of our customers for any reason. Writing names on cups is a fun tradition born out of the relationship and interaction between our employees and customers. Our [baristas] aim to do their best when it comes to spelling the names of our customers, though at times it can be tricky.”

Also, it should be noted that baristas are not required to ask for the spelling of your name, which probably accounts for why it can sometimes go horribly wrong. 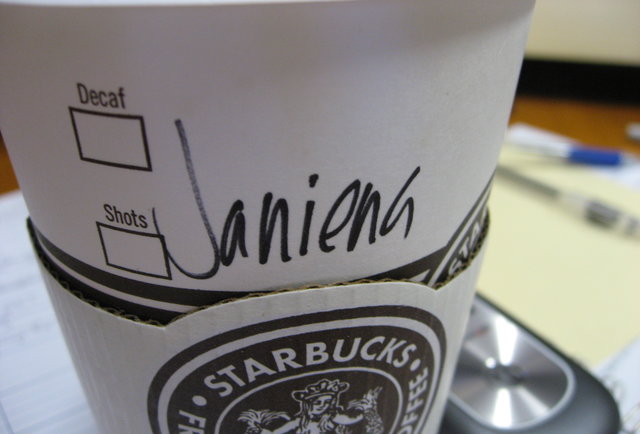 “There’s no real corporate policy other than that we ask for your name,” Tim a barista at a Starbucks in Nashville revealed. “We’re not required to ask for a spelling. We often do, but it’s hit or miss depending on the person working at the time.”

But being insanely busy with multiple orders at once probably remains the main reason baristas get names wrong.

“When I have 40 people in line, if I took the time to ask every single person in line how to spell their name, it’s going to get even longer,” Lisa, a Dallas-based noted. That is why the resort to their best guess a lot of the time.

“We’re going to get complaints from customers that we’re taking too long. It’s a matter of expediency,” Lisa said.

“It’s often a time thing,” Tim added. “Especially in the morning when we’ve got a line out the door.”

So the real question is which is more important to you: your coffee order or your name spelled correctly?

But if you’re someone who wants to have their cake and eat it too, there may be a loophole. The most surefire way of avoiding the name butchery is to download the Starbucks app – if you haven’t already. Once you put in your credit card details, you can order your drink and it will appear on the counter of the nearest store to you, meaning that when you go to pick it up, your name will be spelled precisely as it’s meant to be. That’s because it’ll be copied straight from your payment info, get it?

So that is good news for any Siobhans or Niamhs that might be visiting the US from Ireland. You certainly won’t have to cringe when you pick up your Starbucks order at the counter.