When Spittoons Were a Basic Public Convenience

When tobacco was brought from the Americas to Europe it sparked a worldwide obsession with the new plant. Smoking tobacco was encouraged, as was snuff or chewing tobacco. Chew was one of the most popular ways to consume this addictive plant in the 18th and 19th centuries. In fact, so many people were using chewing tobacco around the turn of the 20th century that laws had to be enacted to prevent people from spitting tobacco-laced saliva on the floor. Enter the ubiquitous spittoon, which helped to contain the mess for a time. 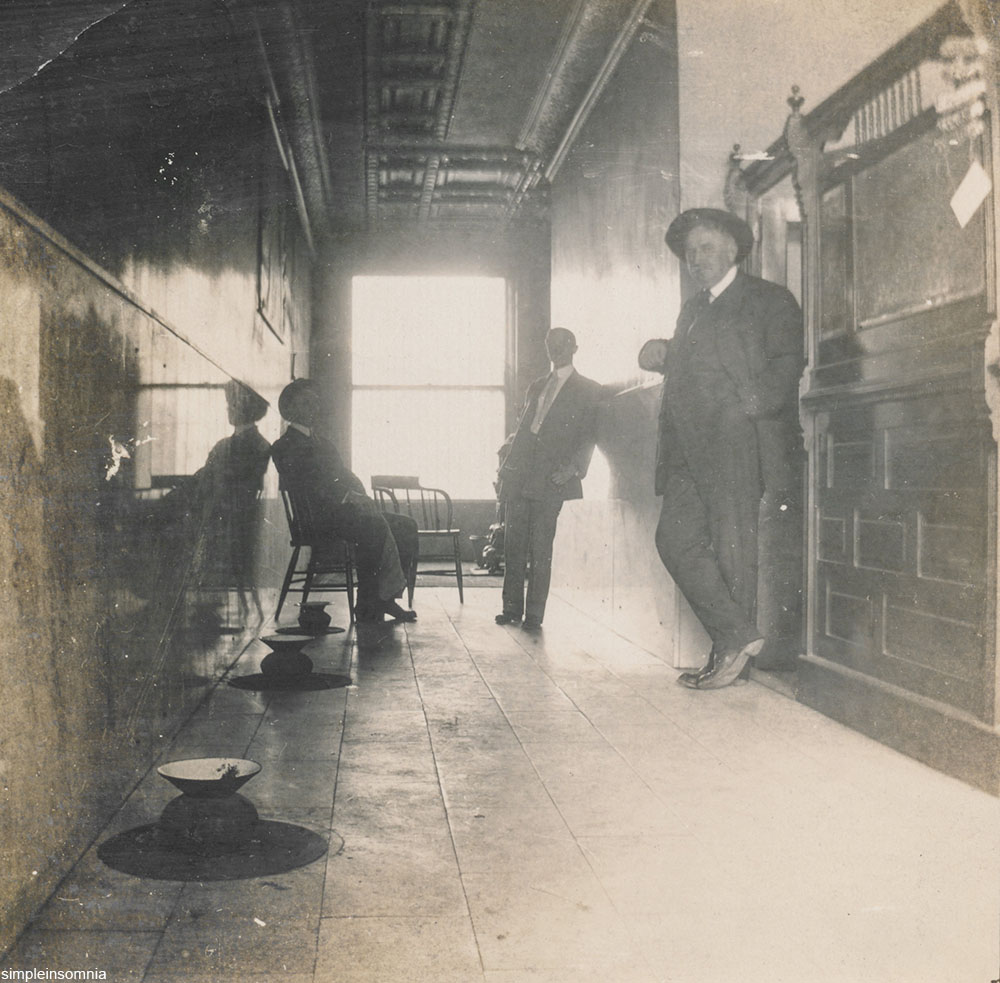 Men in a bank hallway lined with spittoons, early 20th century. Via/ Flickr

There was a time when spittoons were generously located in restaurants, in pharmacies, in offices, and near the entrances to popular businesses. The other option was to have to clean up the dark liquid from floors, which was less than ideal.

The job of cleaning spittoons, or cuspidors as they were also known, often fell the most junior of shop assistants and janitorial staff since it was such a nasty job. And, let’s not forget that spittoons were used for spitting in general, which at the time was a very accepted public practice, whether or not one chewed tobacco. 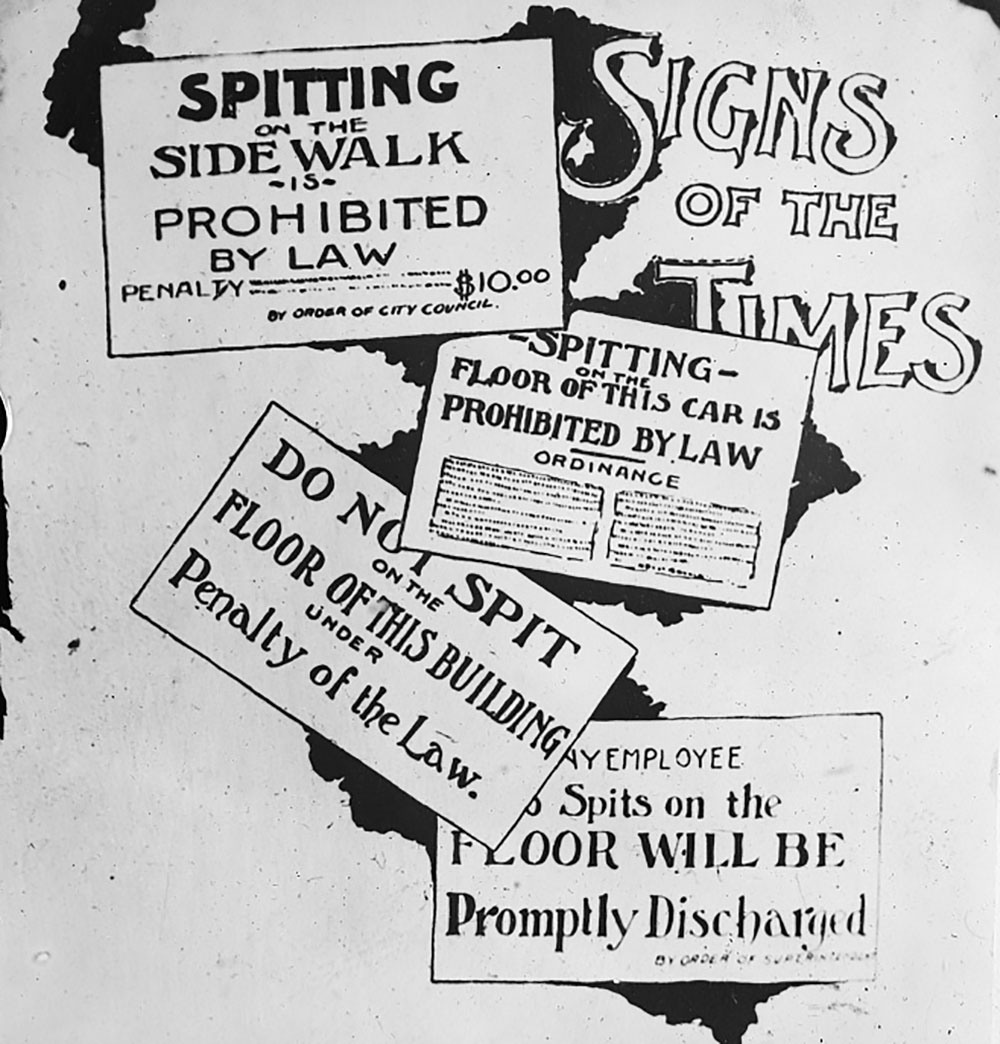 Anti-spitting poster from the 1920s. Via/ Library of Congress

In the end it was concern over infectious diseases which turned public opinion against the option to simply spit on floors and sidewalks.

Anti-spitting campaigns were undertaken following the devastating flu epidemic of 1918. Another major killer of the day was tuberculosis, which causes a lot of phlegm -which of course people spat into public spittoons. These and other diseases were the main reasons why spitting in public came to be seen as a danger. 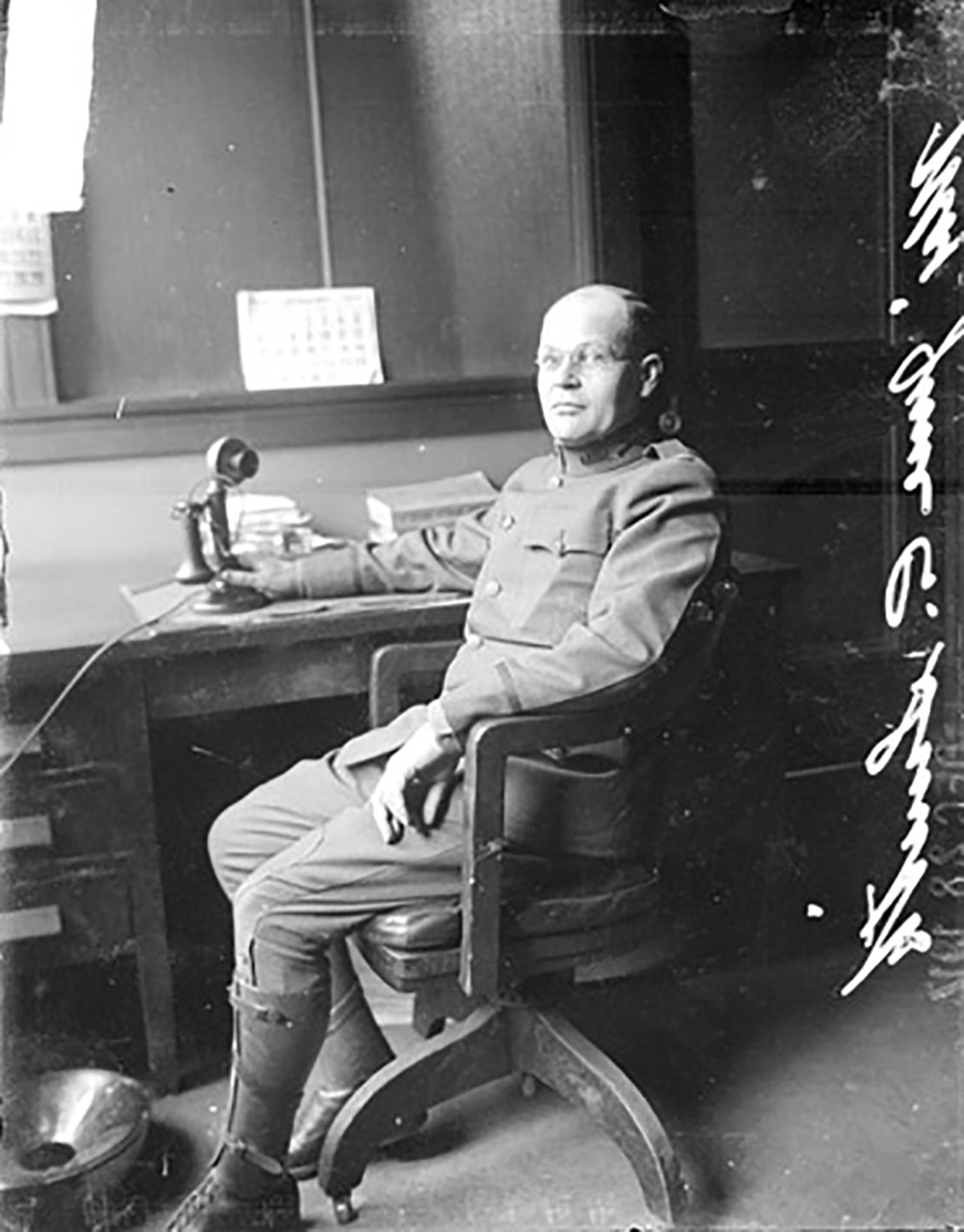 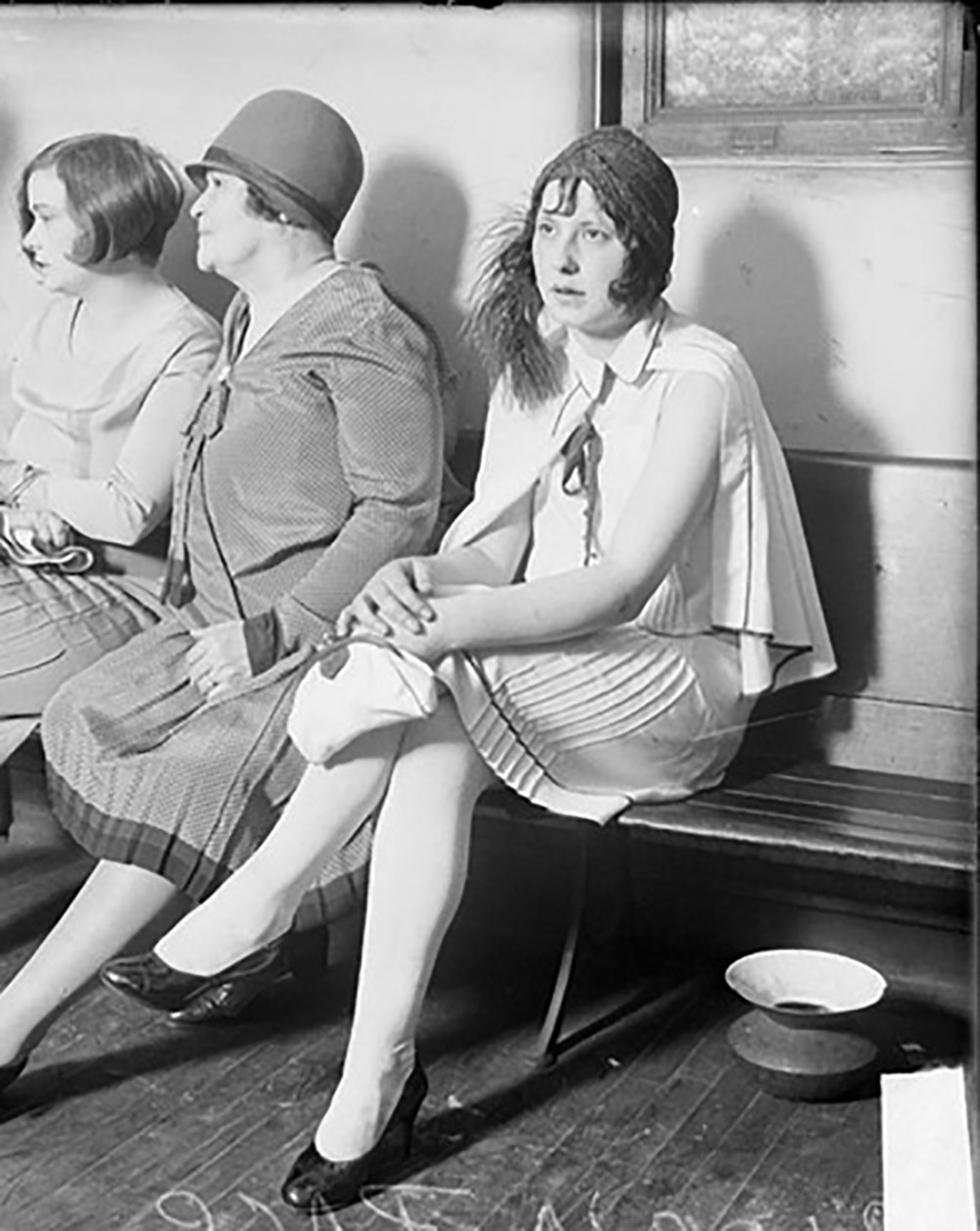 1920s photograph of flappers in a waiting room with spittoons on the floor. Via/ Wiki Commons 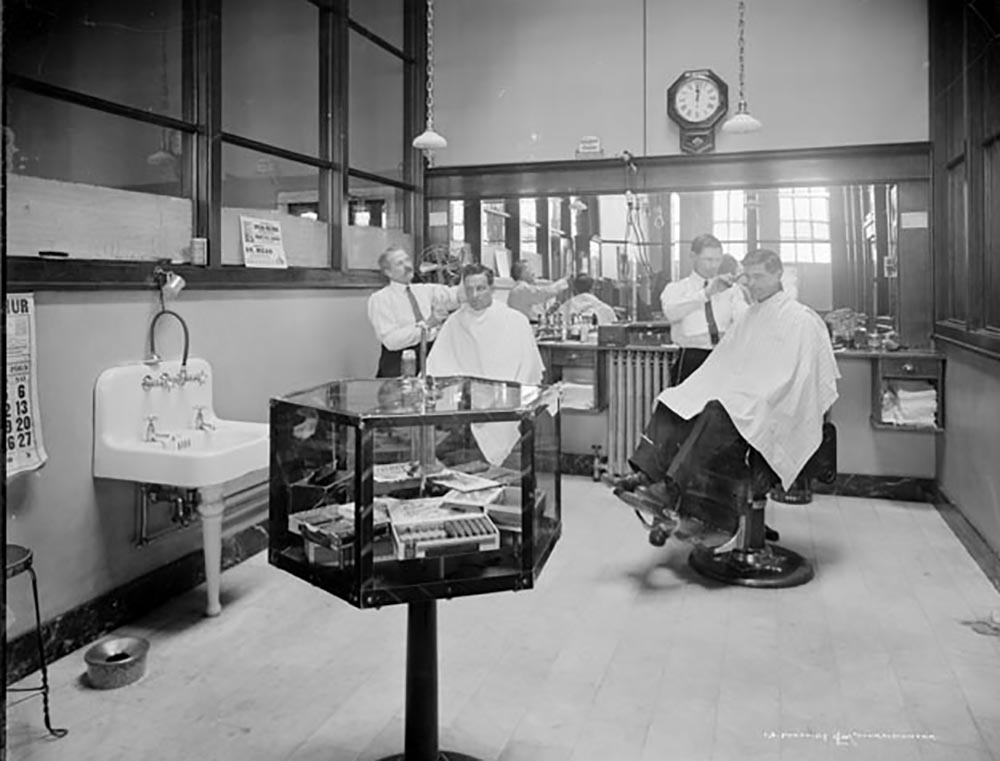 The solution was to create receptacles for the purpose, in materials that would not absorb the chewing tobacco spit. Many were made of brass or other metals so that they could be easily cleaned, as well as porcelain and enamelware.

While this type of object had been in use since the 18th century, it was during the 19th century that they became much more common. 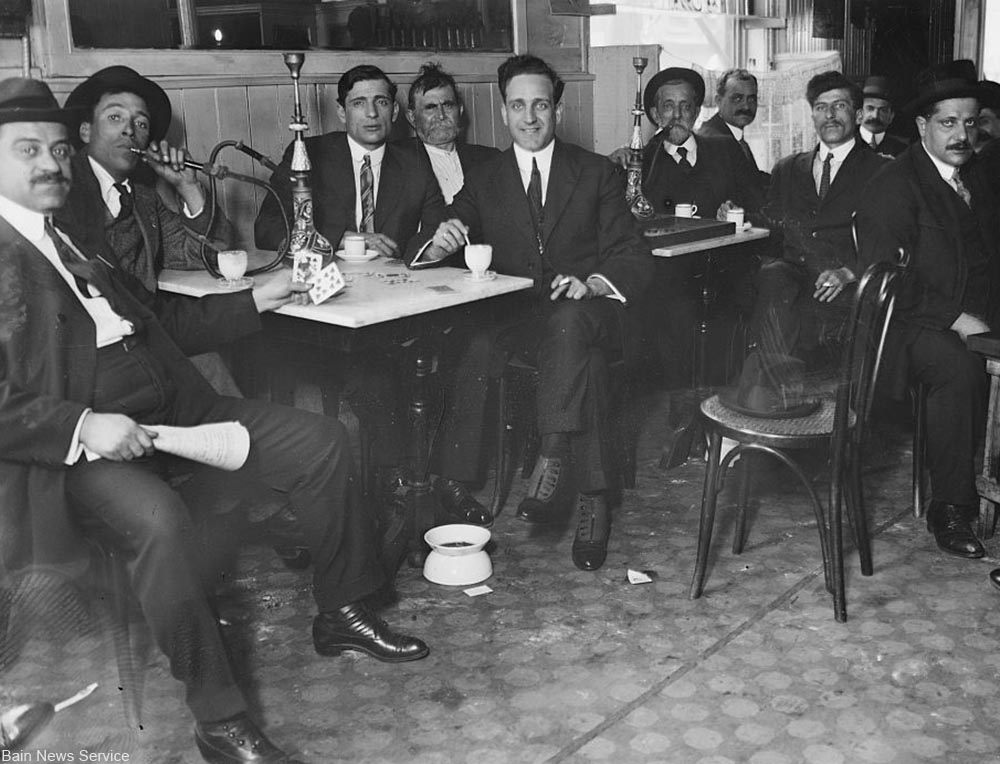 Men enjoy hookahs, cards, and chewing tobacco at Syrian restaurant in New York, circa 1910s. Via/ Library of Congress 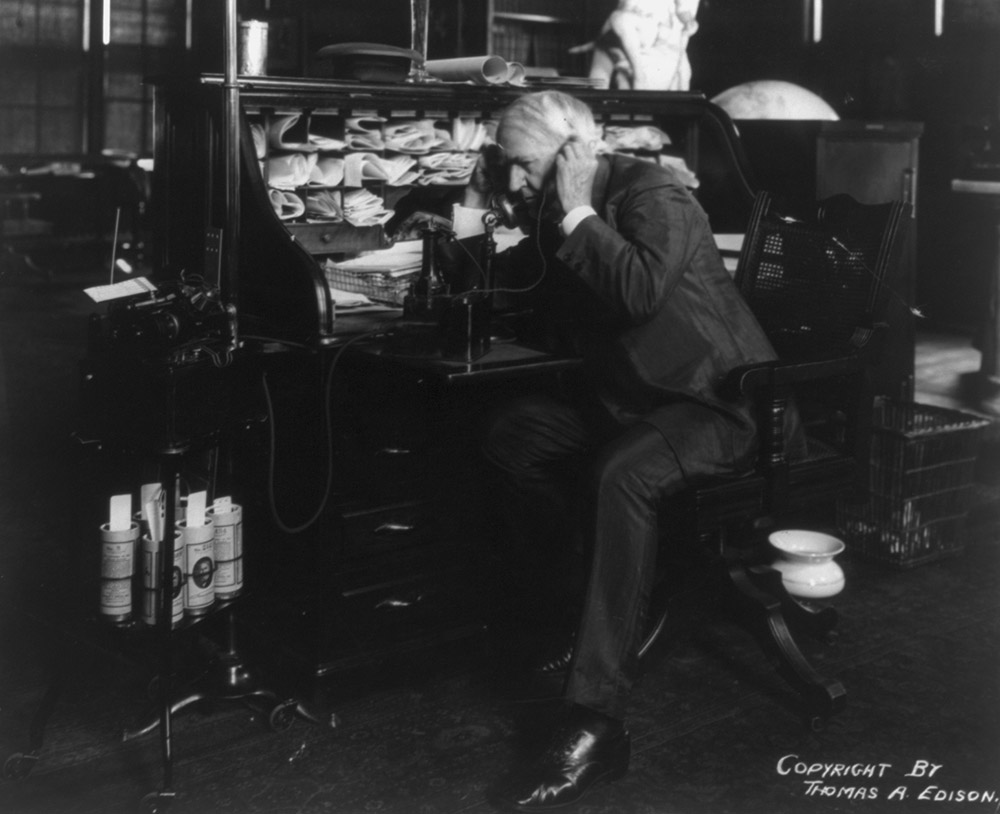 Thomas Edison at his desk, 1914. Note the spittoon nearby. Via/ Library of Congress 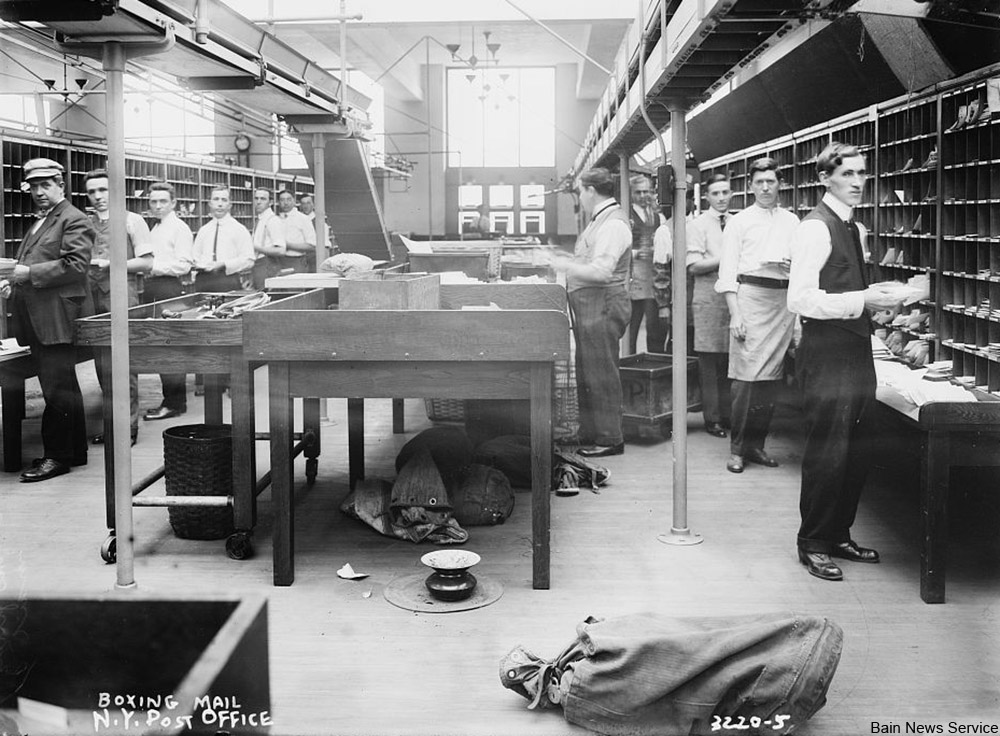 Postal workers in New York, 1914. Via/ Library of Congress 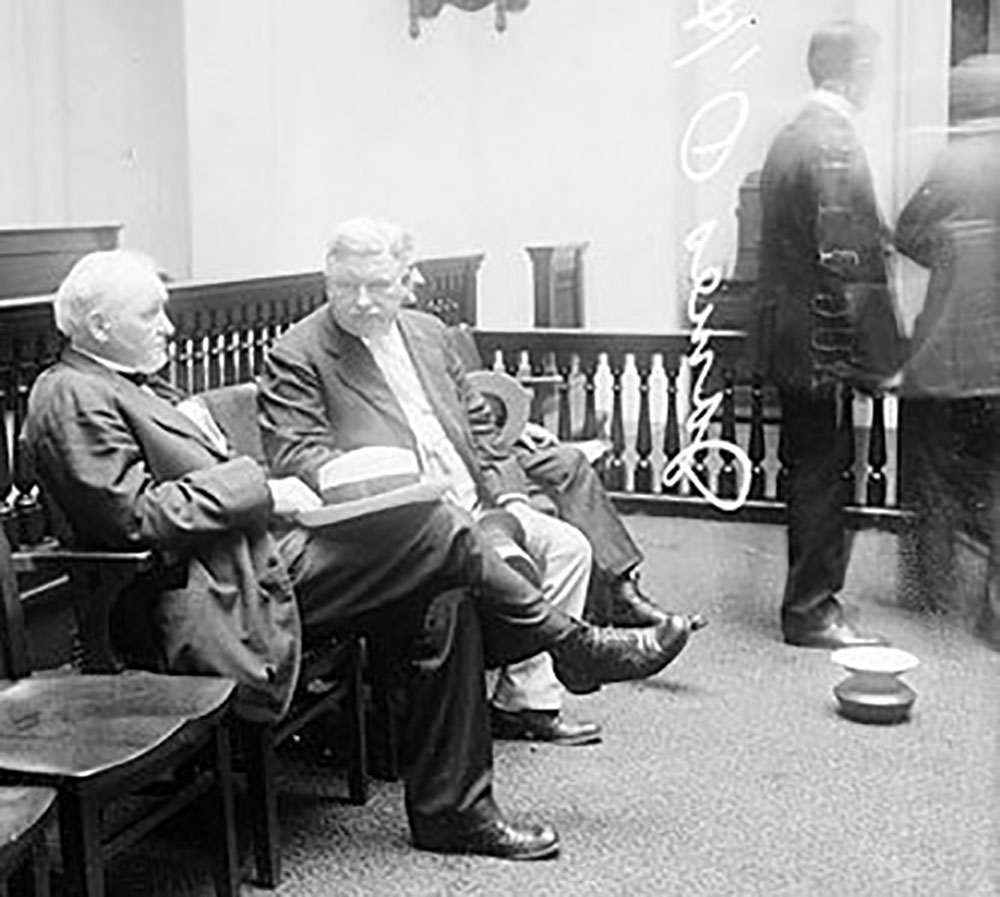 Spittoon at a Chicago courtroom. Via/ Wiki Commons

During World War I, the Red Cross sent out Army food boxes for prisoners of war which included either 4 packs of cigarettes, 4 packs of smoking tobacco, or 1 cut of chewing tobacco. Tobacco use was simply a part of everyday life back then, as were ashtrays and spittoons. 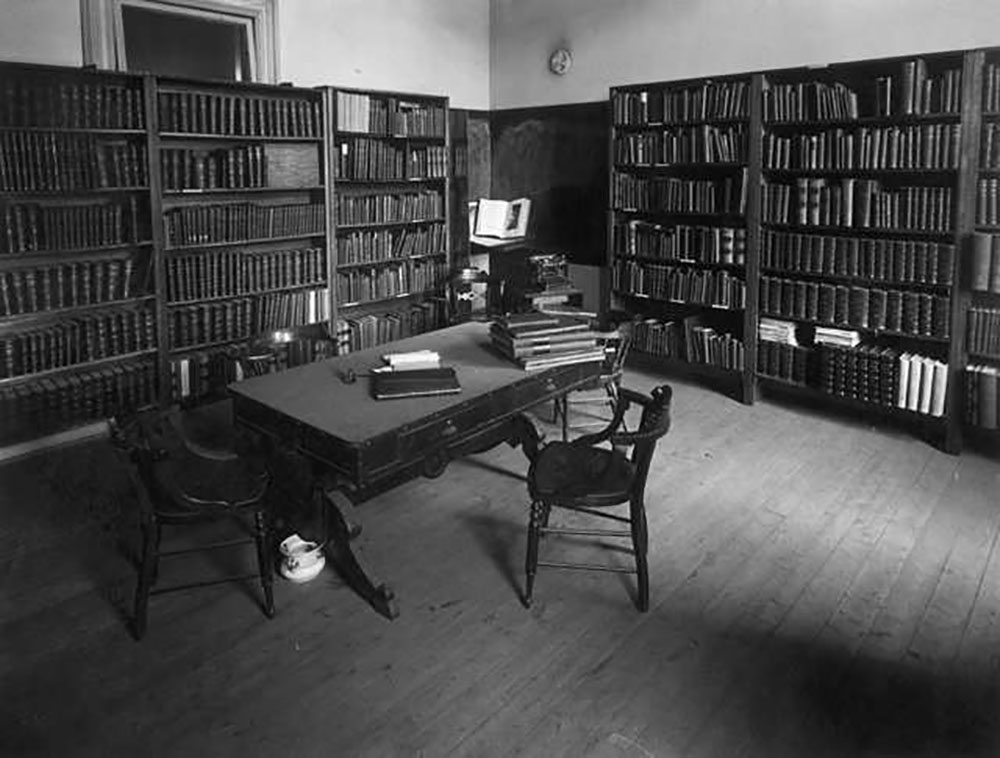 University of Colorado at Boulder Library complete with white spittoons near the tables. Via/ Wiki Commons

Even into the 1930s these public amenities continued to be widely used. Spittoons were considered as common (and as necessary) as waste paper baskets. They were found in barber shops, in banks, and just about anywhere men were expected to be, although special ladies spittoons were also made.

Even courtrooms and the House of Representatives had spittoons, the later of which were still in place into the 1980s! By all accounts, however, most of the liquid intended for the spittoon actually made its way on to the floor instead. 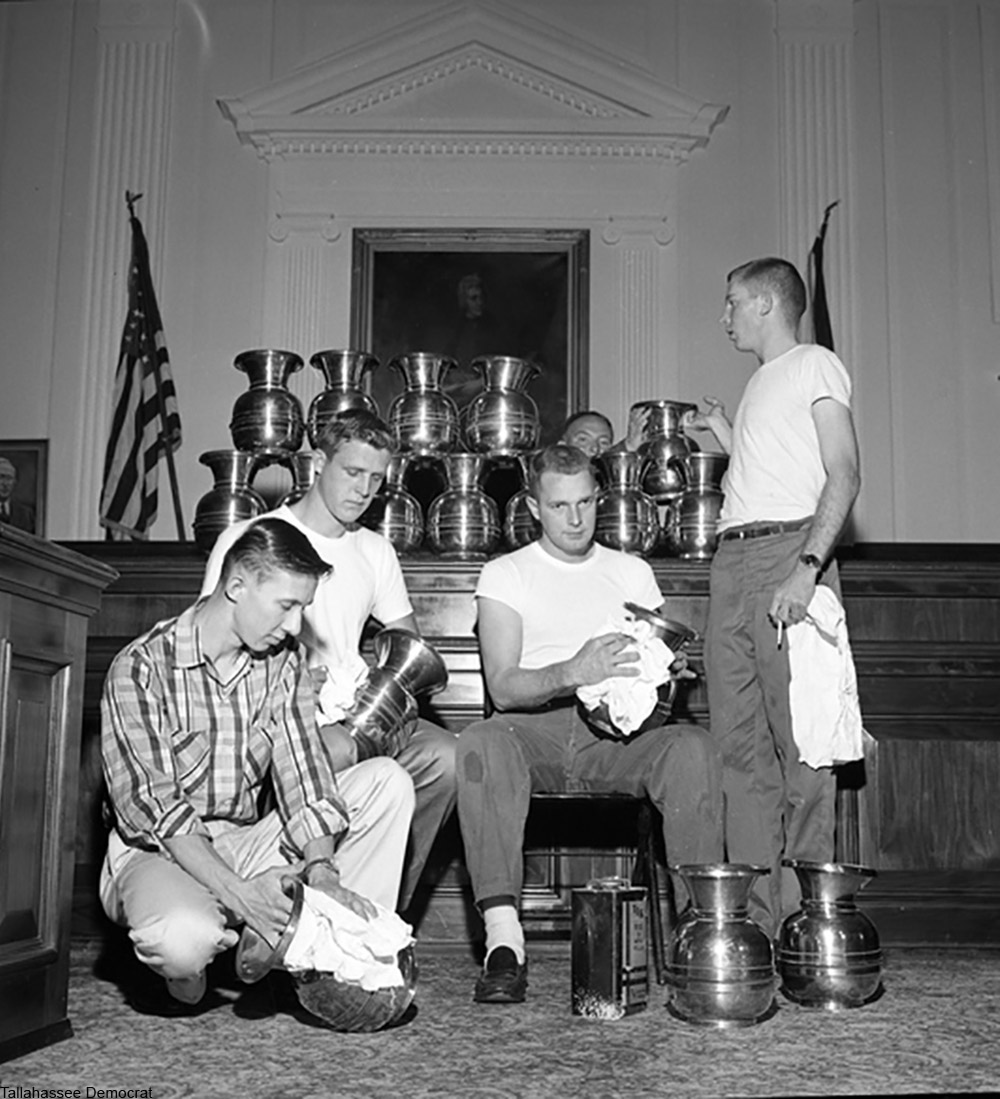 Original caption from 1959: “Young men polishing cuspidors in the Florida Senate chamber in Tallahassee, Florida.” Via/ State Archives of Florida

It was only in the 1930s that many municipalities began to outlaw spitting altogether, though today these anti-spitting laws are often not enforced. By World War II most people who used tobacco had switched to cigarettes, which were considered far more sanitary, making spittoons largely unnecessary. And, today the only time spittoons are usually used is during wine tastings.

Despite the morbid and unsanitary history of spittoons, they are highly collectible today and many of these these objects are frequently mislabeled at second hand shops and yard sales. There are even collectors who have amassed huge collections of these once-common items. Many metal spittoons from the old days were recycled during the scrap metal drives of World War II, making them a bit more rare these days.