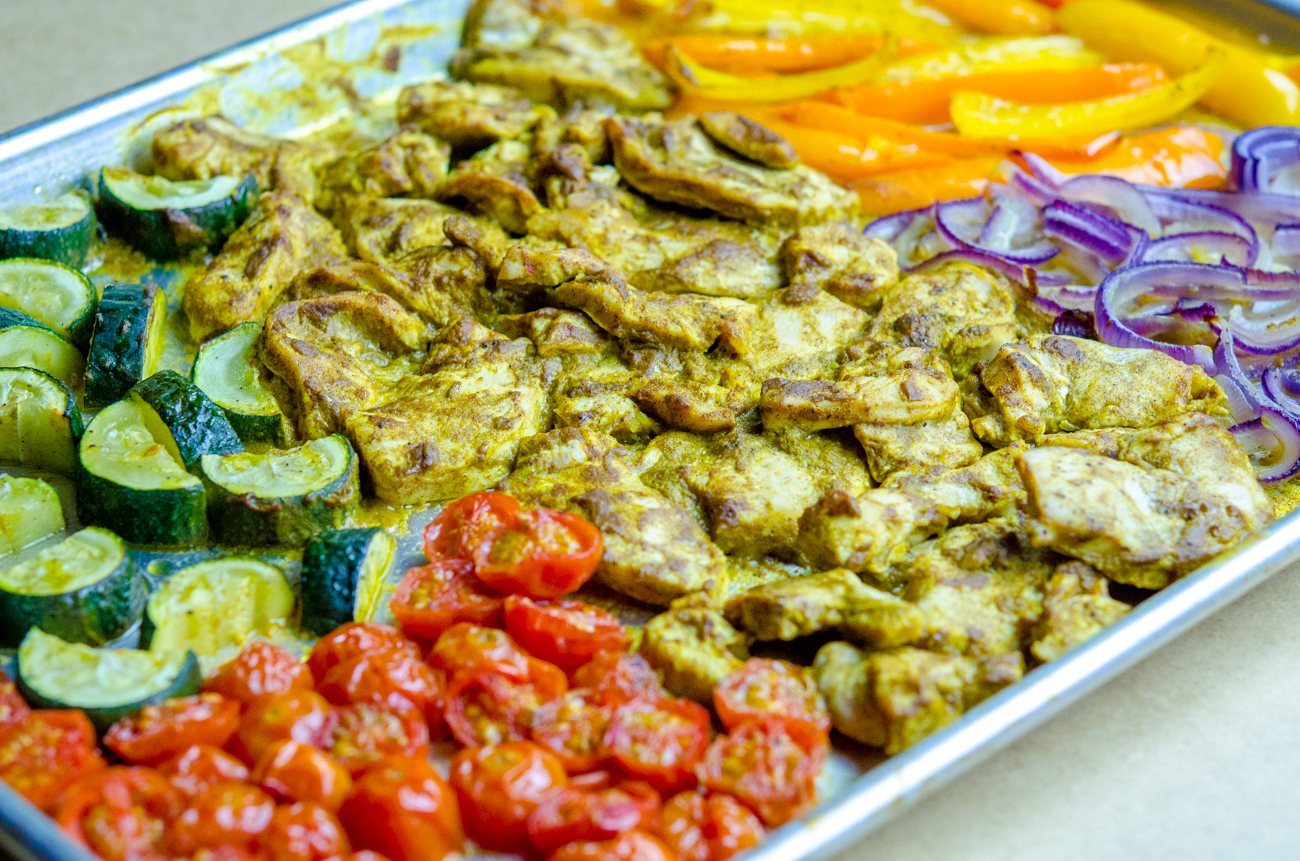 Chicken Shawarma is an easy thing to love. It’s SO flavorful and succulent, but if you’re not lucky enough to have a shawarma shop right down the street, it might not be in your regular rotation. The good news is that you can totally recreate it right in your own kitchen and you don’t even need a spit or rotisserie to do it. This Chicken Shawarma is as flavorful as any restaurant version, but the sheet pan method makes the preparation super simple and the extra veggies we’ve thrown in mean you get a complete (and healthy!) one-pan meal. 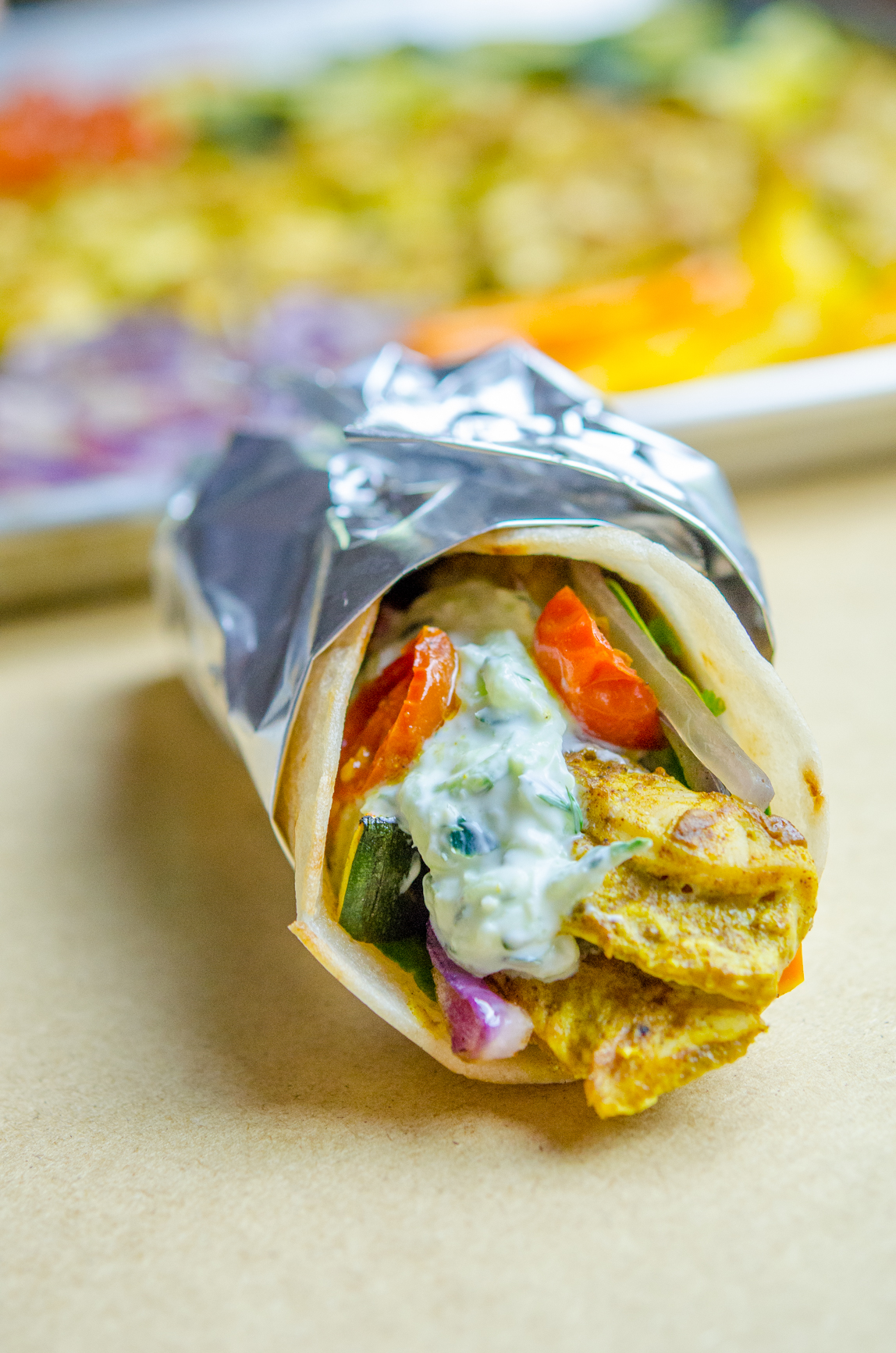 The key to this is largely in the seasoning of the chicken, which involves a quick mixture of yogurt, cumin, cinnamon, turmeric, and coriander. That’s only four spices, but they’re robust ones and they’re totally necessary for that signature shawarma flavor. You don’t need to let the chicken marinate for too long, just let it hang out while you chop your veggies and it’ll do its job just fine. 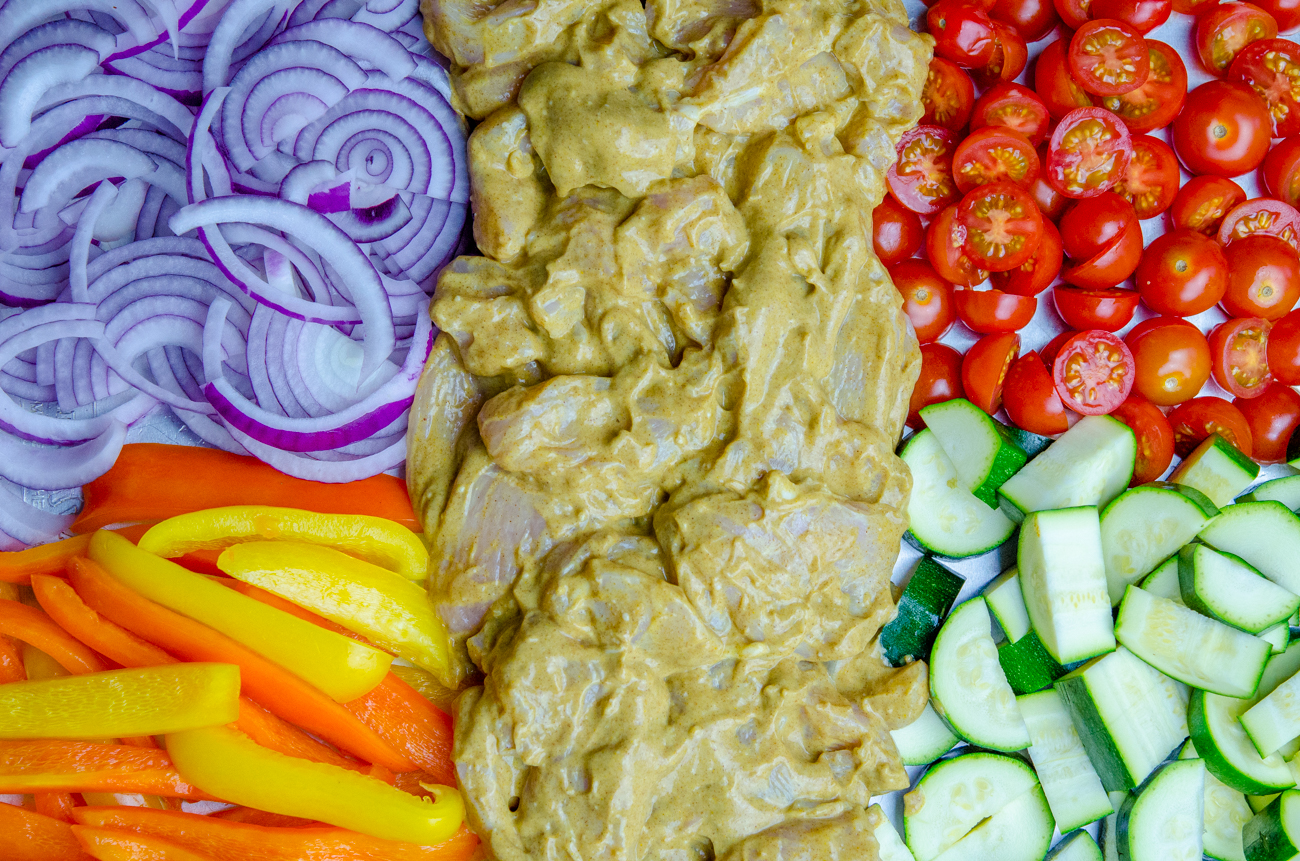 Speaking of veggies, there are a couple in here that you might not expect from a traditional shawarma experience, but shawarma on a sheet pan isn’t exactly traditional anyway. In the interest of having a well-rounded one-pan meal, we’ve got zucchini and bell peppers making an appearance on the sheet pan so that you can really go ahead and call dinner done as soon as you pull it out of the oven. 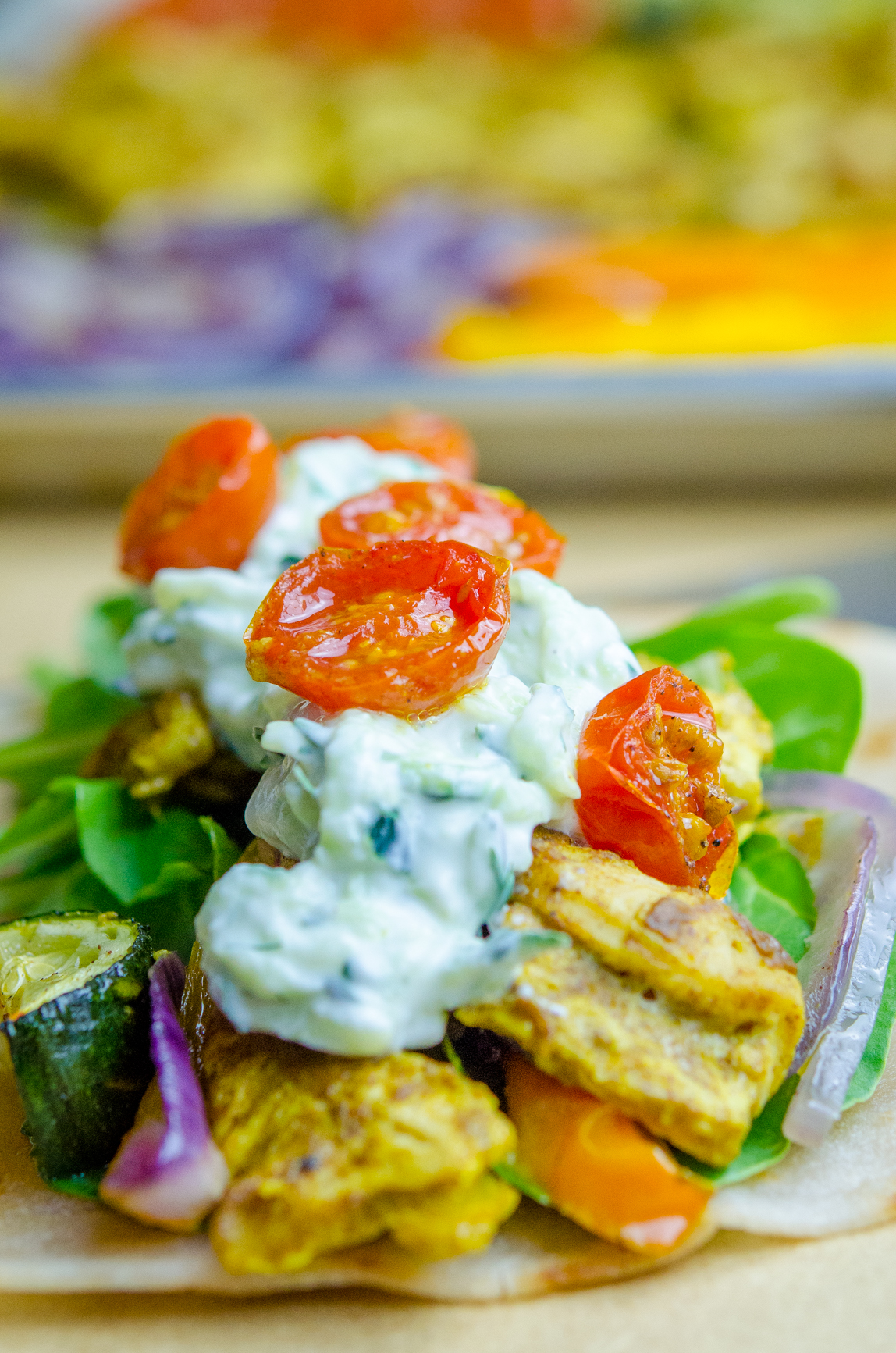 Those veggies do release quite a bit of liquid in the oven, so feel free to drain some off halfway through the cooking time to avoid braising all of your ingredients. Everything will cook through in twenty minutes, but this is a versatile meal where you can let things hang out in the oven a little longer to get more color or you can swap out some veggies for whatever you might have on hand. 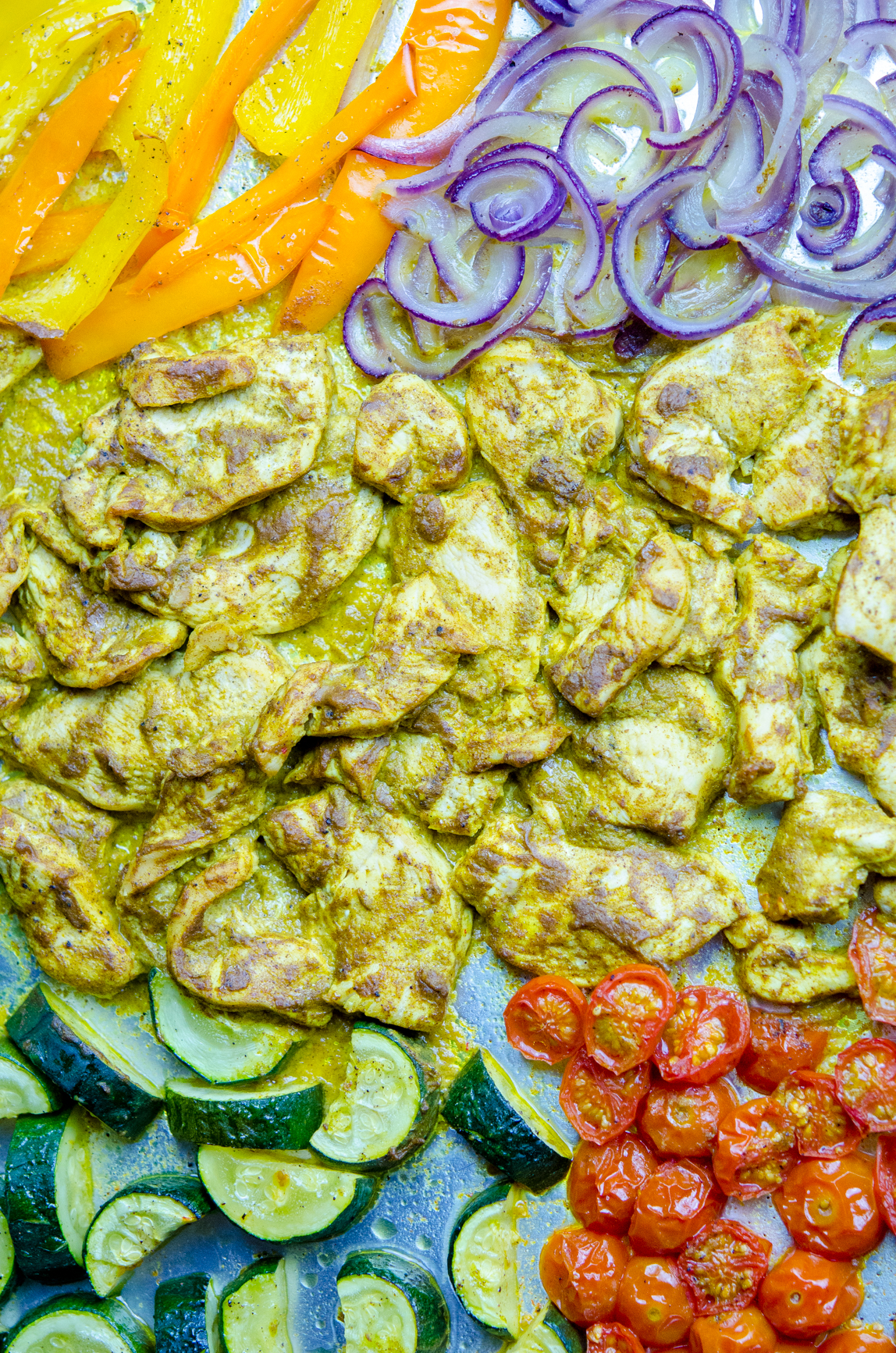 Now, normally you might see shawarma with a garlic sauce or tahini or some combination of the two, but I’m partial to tzatziki so I’ve given you my favorite version here. I love that cool combination of yogurt, cucumber, lemon juice, garlic, and dill over the spiced chicken. Pile it in a pita or just on a plate… either way, it’s a scrumptious meal that’s easy to make and even easier to enjoy. 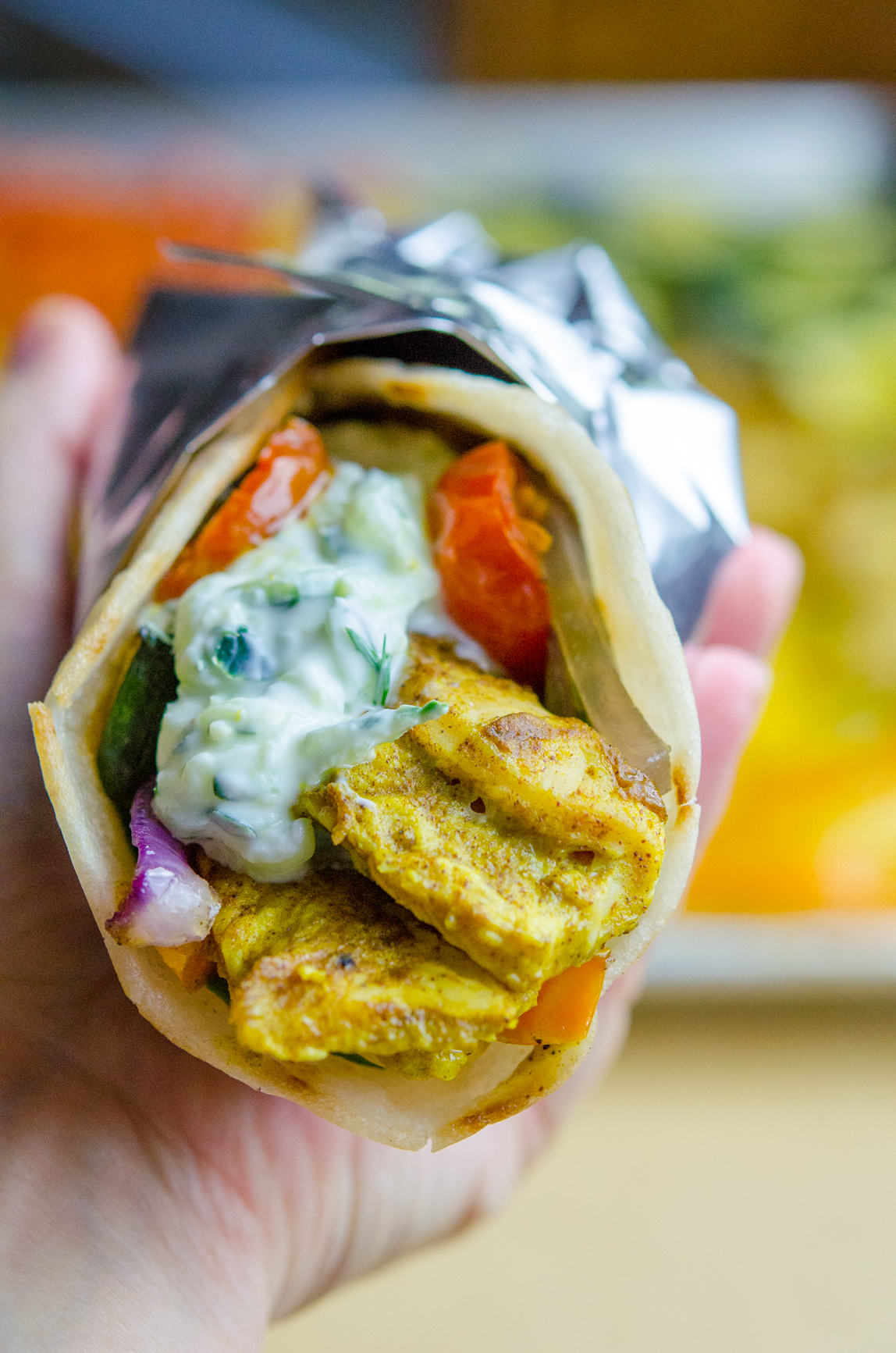