These days, cakes can be made to look like anything — other food items, animals, geodes, you name it.

It’s interesting to see all the different creative elements that bakers bring to the table. One baker, who also happens to be a stylist and designer, has taken a very interesting new approach that will make you feel right at home. Alana Jones-Mann creates beautiful cakes that come to life with texture. The result is a line of cakes that look just like shag rugs.

Thanks to her background in design, she has no trouble picking out the perfect colors and abstract patterns to really give that ’70s shag feel. Rugs aren’t her only source of inspiration, however. Alana also channels wallpaper, terrariums, and other household design elements to bring these magnificent edible art pieces to life. 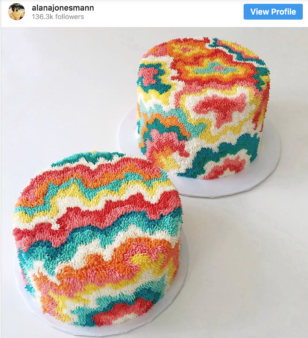 Have you ever seen a cake that’s decorated so beautifully that you almost feel guilty about eating it? Those are the kind of cakes baker Alana Jones-Mann is serving up. The Los Angeles-based baker creates colorful, creative designs that can almost keep you from grabbing a fork and digging in.


Alana channels her background as a stylist and designer to make cakes that draw from household elements. Possibly the most striking of them is her series of cakes that are meticulously piped to resemble shag rugs. 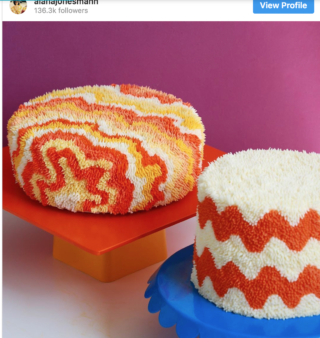 Piping the buttercream icing alone can take up to two hours, but for Alana, it’s a labor of love. Once a rainy-day hobby, Alana has now taken her passion for creating and baking full-time as her designs have taken off. 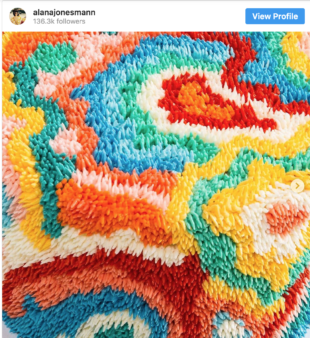 “I don’t have a plan or anything when I start,” Alana revealed to the Los Angeles Times during a recent profile. She also revealed another interesting tidbit of information. The so-called “shag cakes” were never meant to be that at all. 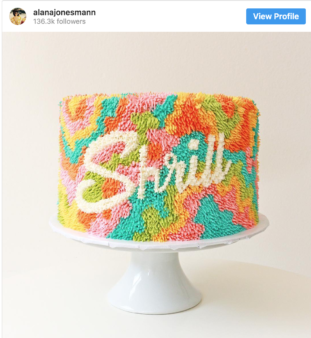 “What’s weird about the shag cakes is I think a lot of people think I purposely made it to look like a shag carpet,” Alana explained. “And that was never the plan. Other people started calling them that.” 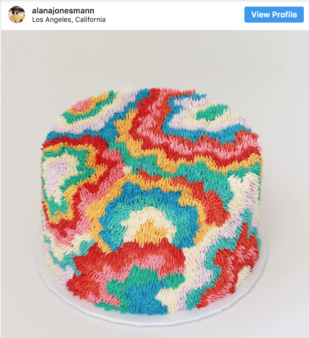 Alana does acknowledge, however, that the ’60s and ’70s are a major influence on all of her creative endeavors. The cakes’ vintage aesthetic closely matches her own choices in fashion, music, and more. 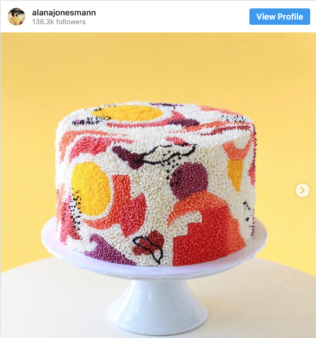 For Alana, the shag cakes celebrate a major step in her journey as a baker and as an artist. “The shag cake, for me, shows my evolution as an artist and how I found my own personal style,” she explains. 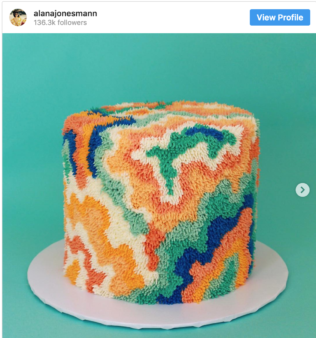 She does struggle with how the popularity of the cakes has changed the conversation. “It’s hard when people are like, ‘This is the trendy cake of the moment now.’ Because [this cake] is kind of me, you know? It’s who I feel I am as a person,” she noted.


Certainly, Alana isn’t the first artist to struggle with public interpretation and praise versus personal meaning. It’s especially personal because Alana doesn’t have the long culinary background that many who seek her level of notoriety can claim. 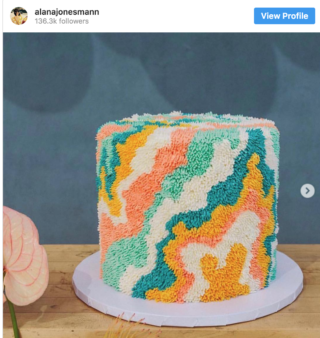 Alana is self-taught. Feeling like she was in a creative lull in her career as an event planner and marketer in New York, she turned to baking as an outlet during her free time. One day, she baked her then-boyfriend a cheesecake that he took to his job at a restaurant. It sold out. 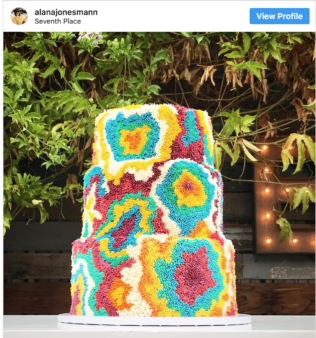 That encouraged Alana to learn more about baking. She turned to the internet, where she studied tutorials while putting in hours in the kitchen of her New York City apartment. Through trial and error, she found her way. 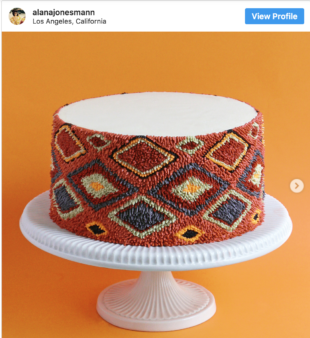 After experimenting with decorating tips, she knew cake decoration was where she wanted to focus her energies. “The reason I moved on specifically to cakes is because of their surface area. I felt like I had a proper canvas to really work on,” she explained. “Cake is my medium.” 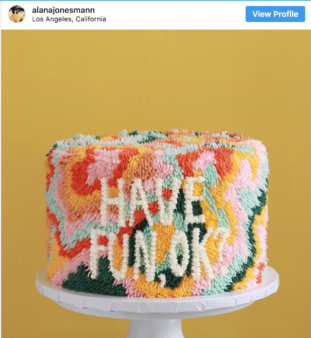 You might think that these techniques are very complicated or rely on professional-grade tools, but Alana takes an almost minimalist approach. She picks old-fashioned buttercream over today’s favored cake decorating medium, fondant. 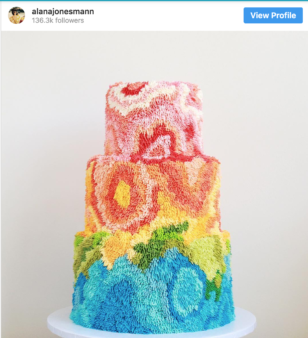 Alana also uses basic tools for piping. The food coloring gels and decorating tips she prefers can be found at your local craft store. For her, it’s not about what you use as much as how you use it, and she’s got her method down. 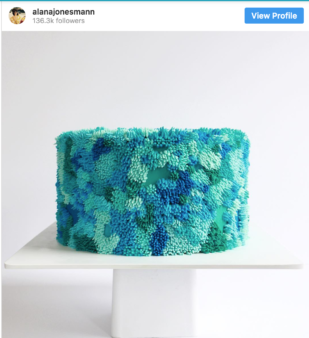 As far as the cake itself, Alana prioritizes taste just as much as aesthetics. “I spent probably a year developing my own recipe and figuring out what base I liked the best and what works for me in terms of cake flavor,” she said. 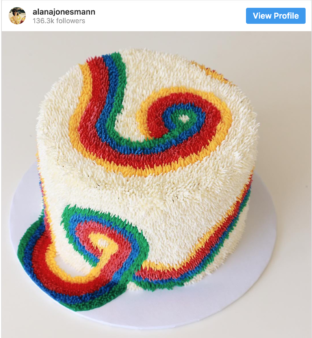 “The biggest compliment is when someone says, ‘That was the best-tasting cake ever,’” she admits. “I’m proud of my designs and I would never hand off a cake that I thought was ugly. But when someone comes back and raves about the taste of the cake, that’s all I want to hear.” 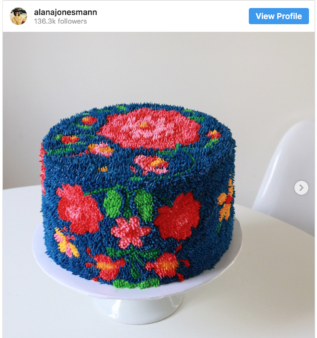 Alana has been baking professionally for about a decade. Three years ago, she bid farewell to the East Coast and headed back to her native California. There, the shag cakes took off in a way they never did in New York. 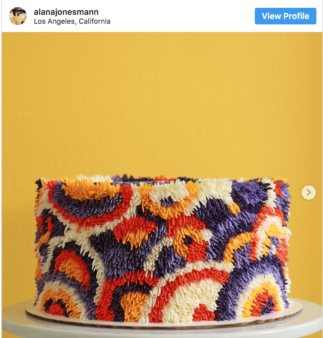 “It’s ironic that now I do a lot of New York work in terms of editorial stuff, and that New York clients out here visiting are interested in them. I’ve been making [the shag cakes] for five years now at this point. But when I was in New York, I could not get anyone to order them.” she laughed. 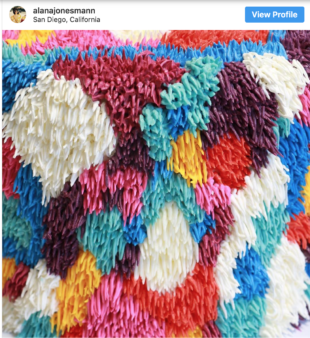 Alana’s experienced great success, with her cakes being featured on Food Network and being commissioned by celebrities. While she loves the shag cakes, she’s always delving deeper into yesteryear for inspiration. 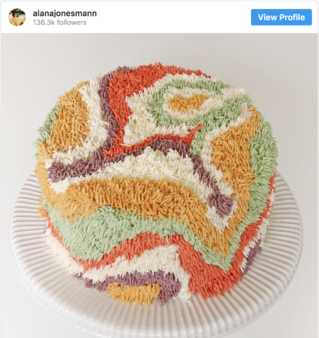 She’s found the perfect balance of success and personal fulfillment, and although there may be more lucrative opportunities out there, she’s just fine dedicating hours on end to perfecting individual cakes rather than giving in to the commercial grind. “It’s such a meditative, enjoyable process,” she noted.