Just in case you have been visiting another planet, you might have missed Peloton’s latest Christmas commercial. It seems as if social media is buzzing about it.

A slim woman on her Peloton is featured in the commercial over a year after being given a bike for Christmas. A year later, she sits down with her husband on the couch to watch an unusual vlog of her daily exercise sessions.

After the commercial was posted online, people started comparing it to something from ‘Black Mirror’. They were even asking her to leave her fictional husband.

It seems as if Ryan Reynolds was paying attention to what was being set on Twitter and decided to do a follow-up commercial. The actress from the Peloton commercial played the lead.

The advert was for Reynolds’ Aviation American Gin. Monica Ruiz is drinking gin at a bar after breaking up with her fictional husband that gifted her the Peloton.

“You are safe here,” one friend tells Ruiz. She then gives her a toast, and Ruiz replies “To new beginnings.” Ruiz then downs the entire glass of gin and is handed a second glass by one of her friends.

The original husband from the Peloton ad, Sean Hunter is not doing quite as well as Ruiz with the backlash.

Hunter told Psychology Today that “five seconds of air time” had “created an array of malicious feedback that is all associated with my face.”

“As my face continues to be screenshot online,” he continued, “I wonder what repercussions will come back to me. I pride myself on being a great teacher and developing actor, and I can only hope that this affects neither.”

Twitter users seem to be enjoying the ongoing drama. One user even suggested that those commercials are part of the “Peloton Universe Cinematic Universe.”

While another user suggested: “Anyone else feel bad for the poor guy that played the husband? I bet he’s getting shit for being the ‘villain’ in the ad. Please give that actor a commercial too.”

One commenter concluded: “Not only is this a brilliant ad, you did that actress a solid. You are a gentleman and a scholar, Ryan Reynolds. Well, that, and an alcohol distributor. And a cell phone service provider. You aren’t planning a Mars colony, by any chance?” 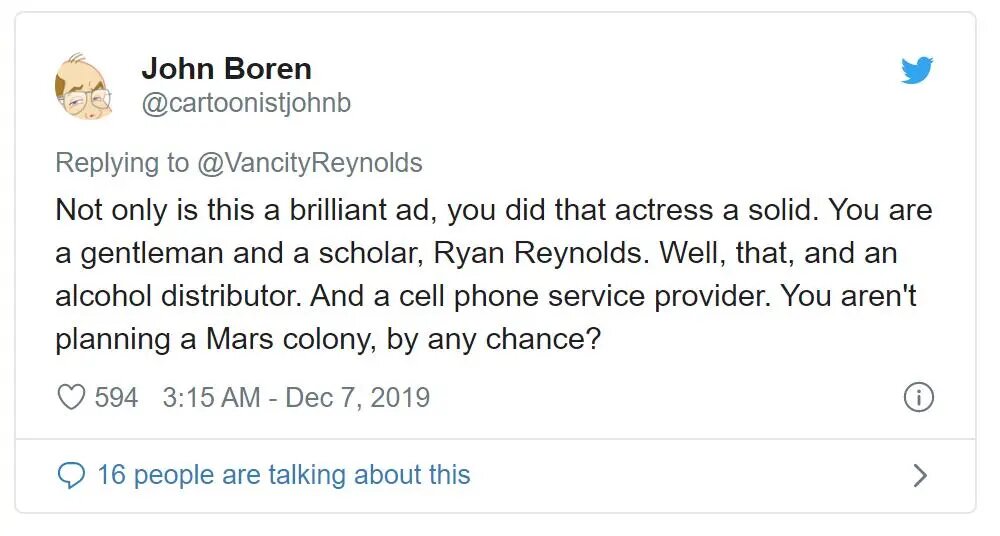