Royal Maternity Fashion Over The Years, From Queen Elizabeth To Meghan Markle

Prince Harry and Meghan Markle’s first child is due any day now, and throughout the pregnancy, Meghan has kept up her status as a total fashionista.

And she’s not alone in that, as most royal family mamas have kept up their high-class and chic-as-heck looks while expecting.

While most “normal” pregnant women typically think of maternity wear as loose-fitting tops and stretchy pants, that’s not quite the case for the British royals. As most fans of the world’s most famous family know, there are certain unofficial royal etiquette rules that members of the family — and particularly the female members — are expected to follow.

Because of that, we wouldn’t anticipate seeing Meghan (or any other members of the royal family) in overly casual maternity wear. In honor of the latest pregnant royal’s streak of gorgeous maternity looks coming to an end soon, we’re taking a look back at some of the highlights of royal maternity fashion over the past decades, ranging from Queen Elizabeth II to the Duchess of Sussex. 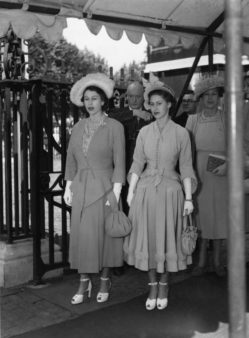 In July 1948, the then-princess Elizabeth stepped out with her sister Margaret to attend the wedding of Lord Derby and Lady Isabel Milles-Lade. At the time, she was more than halfway through her first pregnancy with son and future heir Charles, Prince of Wales. 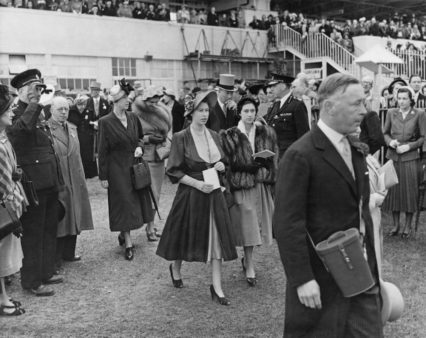 While her father was still reigning as King, the future queen was expecting her second child (and only daughter), Anne, Princess Royal. Here, she wore yet another long coat with a forgiving waist while attending the Derby at Epsom Downs Racecourse in Surrey on May 27, 1950, with her sister. 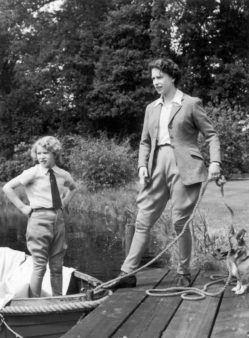 Pictured with her daughter, Princess Anne, in November 1959, the Queen went for a more casual look during a boat trip on Frogmore Lake at Windsor. At the time, she was just three months away from giving birth to her third child, Prince Andrew, the Duke of York. 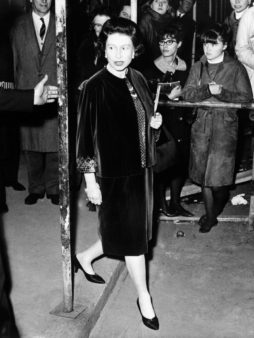 Queen Elizabeth II enjoyed a ballet performance at Covent Garden Opera on November 21, 1963, in London while pregnant with her fourth and youngest child, Prince Edward, Earl of Wessex. She sported a chic velvet dress.

Diana, the Princess of Wales, was known for her iconic fashion — especially while pregnant! Here she rocked a blue polka-dotted dress and casual flats during a trip to the Isles of Scilly in April 1982 while pregnant with Prince William. 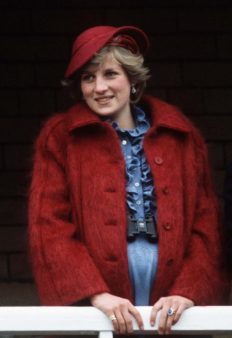 Diana was really into eye-catching colors and ruffles during her first pregnancy! Or maybe that’s just the 1980s for you…

The Princess of Wales, then seven months pregnant, watched the Grand National at Aintree Racecourse on March 31, 1984, in Liverpool. 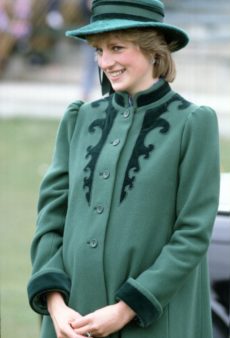 Designers were always excited to have Diana wear their clothes. Princess Diana visited Bristol during her pregnancy with her first son, Prince William, wearing a green coat designed by Bellville Sassoon and a hat designed by milliner John Boyd. 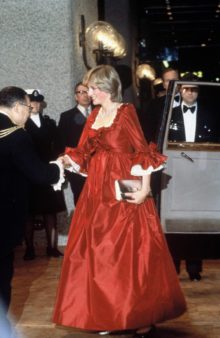 Pregnant Princess Diana wasn’t afraid of a more formal maternity look, either! She wore a red David Sassoon maternity gown while attending a function at the Barbican Centre on March 30, 1982, in London. 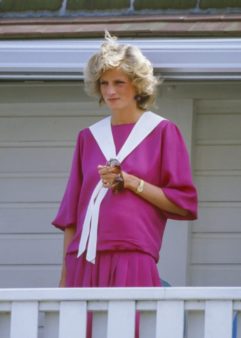 The Princess of Wales wore even more daring looks while expecting her second child. She stepped out in a bright and funky pink outfit while watching a polo match at Smith’s Lawn in July 1984. 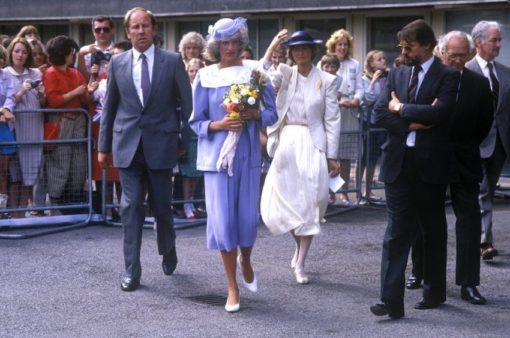 Diana was particularly fond of wearing this style of dress while pregnant, it appears. And of course you can’t forget to pair it with a fun fascinator! 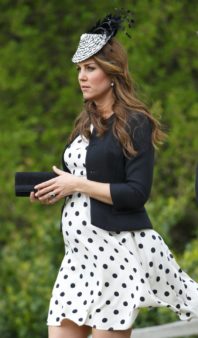 Kate Middleton famously struggled with hyperemesis gravidarum during each of her pregnancies. But she never let her illness stop her from looking chic. The Duchess of Cambridge attended the wedding of William van Cutsem and Rosie Ruck Keene on May 11, 2013, while expecting Prince George, wearing a leg-baring white dress with black polka dots and matching fascinator. 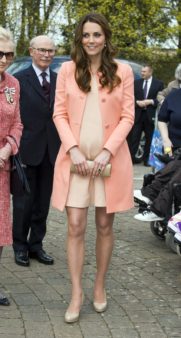 Ever a fan of matching, the Duchess of Cambridge rocked a perfectly spring maternity look during her first pregnancy. Kate wore various shades of peach while meeting children and staff during a visit to the Naomi House children’s hospice in April 2013. 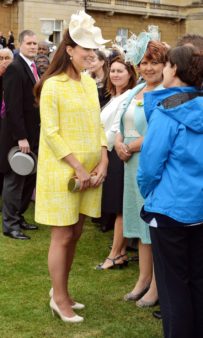 The fashionable duchess wore plenty of bright hues and leg-baring looks during her first pregnancy! While attending a garden party on the grounds of Buckingham Palace hosted by Queen Elizabeth II on May 22, 2013, she paired a loose-fitting, three-quarter-sleeve yellow dress with nude heels. 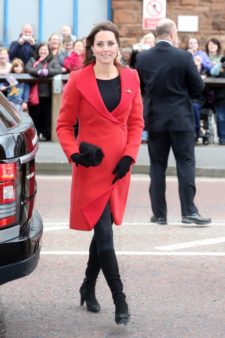 Kate wore a stunning red jacket over an all-black outfit while visiting the Astute-class submarine building at BAE Systems on April 5, 2013.

The Duchess of Cambridge wore a chic-as-heck bright pink peacoat while on a royal visit to the Stephen Lawrence Centre during her pregnancy with Princess Charlotte. 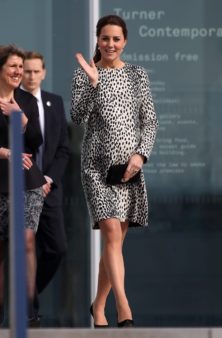 Never let it be said that pregnant Kate is afraid of rocking a fun pattern. She donned a leopard-print above-the-knee dress during a visit to the Turner Contemporary art gallery on March 11, 2015. 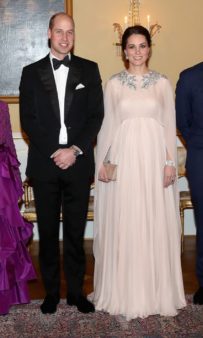 Kate certainly knows how to choose a gorgeous maternity gown for a more formal event. During their royal trip to Sweden and Norway, Prince William and Kate attended a dinner at the Royal Palace in Oslo, Norway, and the duchess looked stunning in her empire-waisted light peach dress. 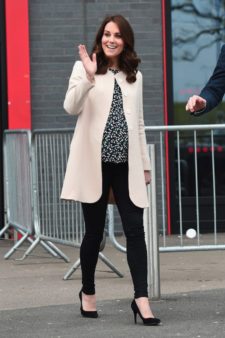 Kate also looked perfectly put together in her more casual maternity garb. While attending engagements celebrating the Commonwealth at the Copper Box Arena in London during the last weeks of her third pregnancy, Kate paired a fun, patterned loose top with form-fitting pants. And of course her usual heels, because that’s just how Kate rolls.

Meghan Markle sure loves a fun pattern! Shortly after being announced as vice president of the Queen’s Commonwealth Trust, the Duchess of Sussex stepped out in this black-and-white above-the-knee dress on International Women’s Day. 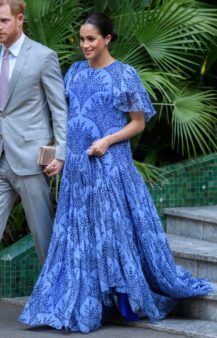 On the final day of Meghan and Harry’s official visit to Morocco, the duchess donned a gorgeous floral-printed blue silk gown by Carolina Herrera while meeting with King Mohammed VI in Rabat. 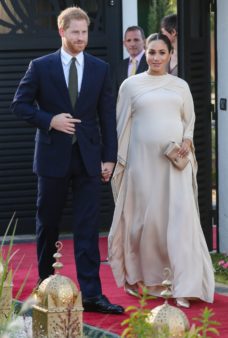 Actually, the royal couple’s entire Morocco trip was an embarrassment of riches for fans of Meghan’s maternity style. The bespoke Dior kaftan she wore during an evening reception hosted by the British ambassador to Morocco was also a winner. Truly fit for a princess! 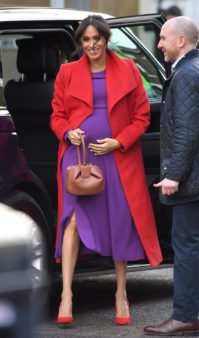 Now this is a bold color combo! People couldn’t stop talking about Meghan’s daring outfit, a vivid purple dress from Babaton by Aritzia paired with an also-bright red Sentaler coat, during her and Harry’s visit to Birkenhead. 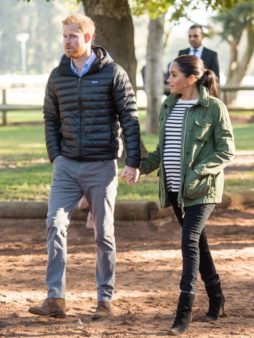 The Duchess of Sussex’s casual maternity wear is just as chic. She wore an army green jacket over a striped shirt and black jeans, paired with black high-heeled boots, on a jaunt with Prince Harry during their Morocco trip.