Fans of rock candy know that the sugary treat is not only beautiful but also incredibly tasty. And if you’ve never had it before, then you definitely need to try the crystallized deliciousness.

But before you take a trip to the nearest candy store with the hope that it has some on the shelf, you should know that you can make your own rock candy at home!

Years ago, when I was a child in school, my teacher let us make our own pieces of rock candy as a science experiment. Yes, a science experiment! That’s because you don’t use a regular old recipe to make this treat. Instead, you need to grow it. And while that might sound a bit weird, the process is actually very cool, which is why I was eager to give it a go as an adult to see if I could successfully make — or rather, grow — my own homemade rock candy.

To put it simply: You need to dangle a piece of string into a jar of sugar-filled water and leave it for at least a week. The sugar will form crystals on the string, which will continue to build up until you have a chunky piece of rock candy. Or, at least, that’s what’s supposed to happen.

After grabbing instructions from ThoughtCo to make sure that I was doing everything correctly, I gathered up all the items and ingredients I needed and set out to grow my own rock candy. Of course, my kids were incredibly interested in what I was doing, so they became my little helpers for this cool (and what I hoped would be tasty) task.

Read on to see how my candy-making experiment turned out, and find out how you can make your own super-sweet rock candy treat. 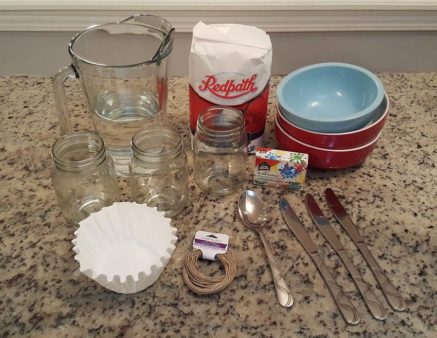 An important note about the string, according to ThoughtCo:

“Crystals will form on a cotton or wool string or yarn, but not on a nylon line. If you use a nylon line, tie a seed crystal to it to stimulate crystal growth. If you’re making the crystals to eat, don’t use a fishing weight to hold your string down. The toxic lead from the weight will end up in the water. Paper clips are a better choice, but still not great.”

Starting With a Seed Crystal 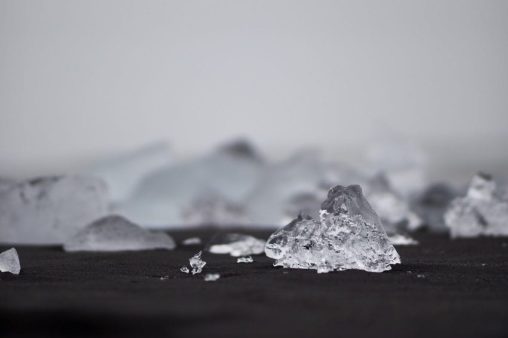 ThoughtCo mentions that you can start your rock candy with a seed crystal, which is “a small single crystal that you put in a saturated or supersaturated solution to grow a large crystal” (the site also provides instructions on how to make one). If you tie a seed crystal to the bottom of your string when making rock candy, the seed will give your crystals a surface to grow on. However, a seed crystal isn’t necessary if you use rough string as opposed to something smooth.

I decided to start without a seed crystal to see what kind of result I would end up with by just using string.

Step 1: Set Up the String

To get things started, I cut a piece of string that I knew would be long enough to dangle down into the jar a fair bit. I then tied the string to the middle of a butter knife (this is where you could also use a pencil or wooden skewers). If you’re using a seed crystal, you’ll want to tie it to the bottom of the string at this point.

I carefully placed the knife at the top of the glass jar and made sure that the string wasn’t touching the bottom or the sides. I then set up two other jars just to be safe.

I boiled water to make sure that it was clean. I then poured a cup of this boiled water into a bowl and began stirring in 1 teaspoon of sugar at a time. Although the original recipe lists 3 cups of sugar, it also mentions that you should stop adding sugar to the water once sugar granules begin to build up on the bottom of the bowl and no longer easily dissolve. This apparently means that the “sugar solution is saturated,” which is necessary to grow your rock candy crystals. However, if you add too much sugar, the crystals might grow on the chunks of undissolved sugar instead of on your string.

My kids liked the idea of making rock candy in different colors, so along with leaving one mixture alone to see what it would look like on its own, we added drops of food coloring to our other two mixtures to create a colorful range of candy.

We then poured each sugar-water solution into separate jars. I thought it might be too messy to try to pour the solution straight from the bowl into the jars, so we scooped it out with the measuring cup. The instructions suggested that I avoid getting any undissolved sugar in the jars, so I was sure to leave those granules at the bottom of the bowls. I readjusted each string to make sure it was in the middle of the jar and hanging down into the liquid instead of curling up.

Finally, I set the jars aside in a spot where they could stay undisturbed for as long as necessary (although I was hoping to give this experiment about a week). I also placed some coffee filters on top of the jars to prevent any dust or dirt from getting into the sugar solution.

Now it was time to wait. I kept my fingers crossed.

I checked on the jars the next day and was supposed to “be able to see the beginnings of crystal growth on the string.” When I peered into the jars, it was hard to see if there were any crystals on the string, but I could see a few forming at the top of the water (which was pretty much impossible to get a picture of). 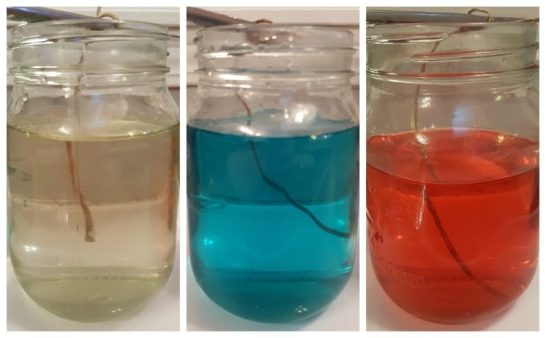 Hmm. Things were looking exactly the same. I could see a few crystal-like shapes on the top of the water, but nothing on the strings. I was starting to wonder if I should try making another sugar solution in a fourth jar in case these didn’t work out, but I decided to give it another 24 hours. 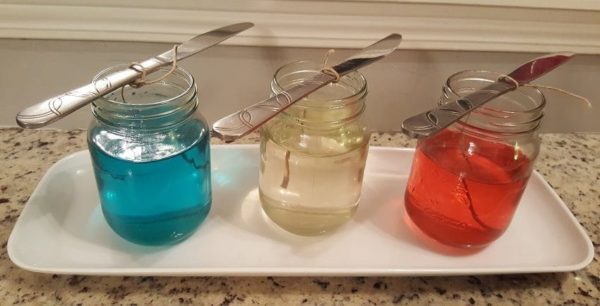 Bummer! Nothing had changed. I couldn’t see even a tiny crystal that might have been starting. While I wasn’t thrilled that my first attempted had failed, it was obvious that it was time to try again. 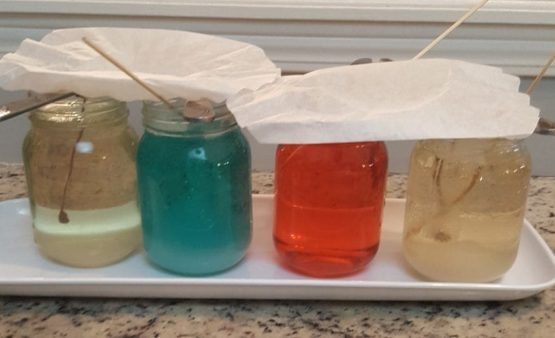 Instead of throwing out the three jars of sugar-water I had already set up, I simply added more sugar and a bit more water (the water had cooled while I had been making the mixture the first time around, so this time I made sure the water stayed super hot while I mixed in the sugar). I also used a bamboo skewer to try to keep the strings firmly in place and perhaps provide more surface area for the crystals to grow on.

I also started a fourth jar entirely from scratch.

And… SUCCESS! Well, partial success. While the first jars with the clear liquid and red liquid still weren’t producing any crystals, the blue mixture and the new clear mixture already had crystals growing on the strings by the next morning (check out the two clear jars in the picture above to see the difference — the one on the left has no crystals, while the one on the right has plenty of crystals).

Over the next few days, the crystals continued to grow steadily in the two successful jars. In fact, there were so many crystals that they were starting to collect on the bottom of the jar as well as at the top of the mixture (oops!).

By the fifth day, the crystals were continuing to form and were now growing on top of each other to create the nice thick “rocks” that would eventually be my DIY candy. I was eager to try it out but wanted to give it a full week before taking the crystals out of the mixture.

The original instructions had suggested waiting until the crystals had grown to the desired size or had stopped growing completely. I had planned to wait one week for this initial experiment, and since my crystals were practically threatening to take over the entire jar, I figured it was the perfect time to check out the results.

By this time, the crystals had formed a rather thick layer on the surface, so I had to use a butter knife to break through it. I thought I would be able to simply pull the string out at that point, but the crystals had also formed a thick layer on the bottom of the jar, and my string was stuck. I ended up having to take a sharper knife and cut through the bottom of the string to get it out.

But once I had removed both strings (one with a skewer still attached) from the two successful jars, I was pleased to find rock candy!

The food coloring did manage to add some color to the crystals that had formed in the blue jar, but it wasn’t very dark. The crystals that had been in the clear liquid ended up being mostly see-through, but then turned a cloudy white color when they layered up together.

I left them to dry for a few minutes before it was time for the final test. 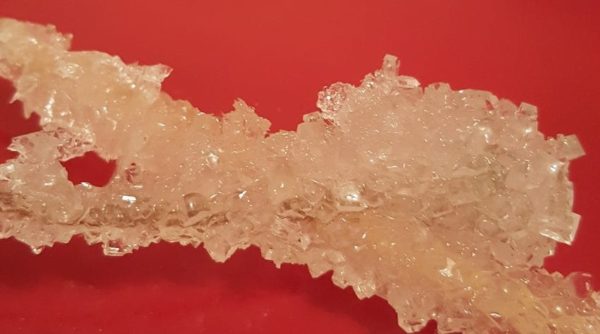 It was finally time to try my rock candy! Both tasted exactly the same: SUPER SWEET! I thought the water might tone down the sugar a bit, but nope, not at all. Taking a tiny nibble of the crystals was like eating straight sugar. I found it a little too sweet. My kids, though, loved it! And while I may need to adjust my recipe and technique slightly so that I don’t end up with a solid mountain of crystals at the bottoms of my jars, I’ll definitely be making my own rock candy again. You should give it a try, too!