You know what they say: “When the spirit moves you…”

Students at Cardinal Gibbons High School, a Roman Catholic private school in Fort Lauderdale, Florida, were enjoying a homecoming halftime performance by the cheerleading squad when an unexpected authority figure stepped onto the basketball court. 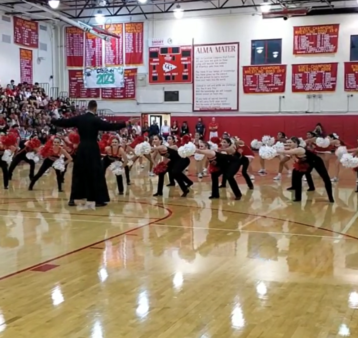 The cheer squad’s high-energy routine was set to Darth Vader’s theme song from “Star Wars” — when suddenly the father took the stage. No, not Luke and Leia’s father, but Father Ricardo Rivera. Father Rivera works at the school, but no one was expecting him to take center stage!

Yet there he was, stopping the performance momentarily as the cheer squad watched him with bated breath. Seconds later the music started up again, but it was largely drowned out by the roar of the audience as they realized what was happening. 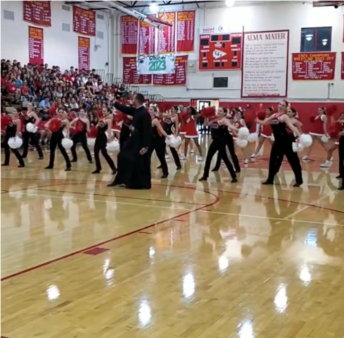 The priest then proceeded to perform the rest of the routine with the squad, moving in perfect sync through a series of hip hop dance moves that would make a pop star proud. It’s clear that he didn’t just happen to meander onto the court and join in; he’s obviously been working on this routine for a while!

After they stopped laughing, school officials uploaded the video to the school’s Twitter and Facebook pages along with the catchy hashtag #dancingpriest. Naturally, the video went viral almost instantly. As an added bonus the school went on to win the game against their rivals, but the real winner is Father Rivera for starting a cool new hashtag. 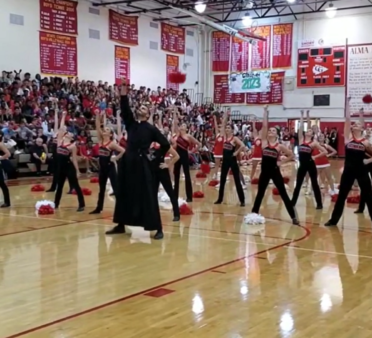 The spirit definitely moved him! Father Rivera obviously has a great attitude and we just love seeing “serious” people going all out to make others smile. Thank you for the laughs, Father!