Papa Johns Introduces The ‘Papadia’ AKA The Pizza Sandwich

Fans of Papa John’s, brace yourselves – the pizza chain is rolling out a brand new menu item! It’s the Papadia, which combines a pizza and sandwich into one. The Papadia comes full of the pizza toppings you’d normally get, folded over like a sandwich.

And no, it’s not a calzone. In fact, the inspiration for the new Papadia comes from another traditional Italian food. 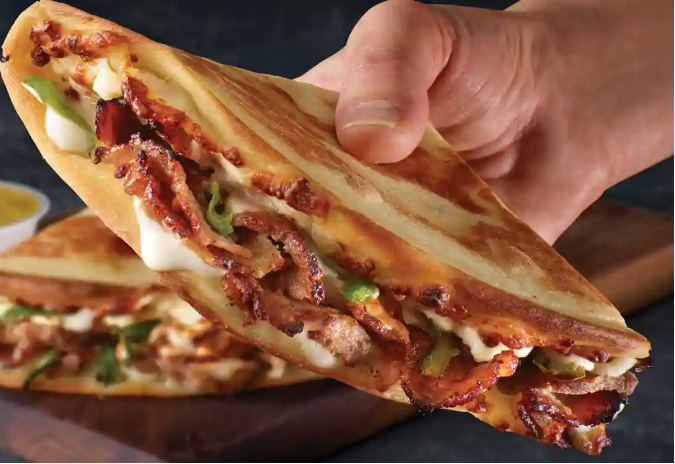 As Paul Fabre, an SVP of product innovation for the company stated in a press release according to Busines Wire, “The Papadia is inspired by the ‘piadina,’ an Italian folded flatbread sandwich from Northern Italy. It combines the original Papa John’s crust people crave along with fresh toppings, making it the best of both worlds — it’s both a pizza and a sandwich.”

The Papadia will only run you about $6 – which isn’t bad at all for a quick bite come lunchtime. And, it also has four different varieties to choose from. You have your Italian, meatball & pepperoni, and then two others that aren’t so traditional Italian in choice: Philly cheesesteak and grilled BBQ chicken and bacon. All four have a different sauce, like pizza sauce, garlic, or BBQ.

Unfortunately, if you are a vegetarian, the Papadia has yet to come in a meatless form. However, Papa John’s does do a garden-fresh vegetarian pizza, a great option until the Papadia is turned veggie-friendly.

The newest release does already have a very vocal fan – former basketball player Shaquille O’Neal, owner of a Papa John’s store and a board member of Papa John’s.

O’Neal has already said to Simplemost, “I can tell you, I couldn’t put down this new menu item that combines everything you love about pizza and sandwiches into one meal.”

So, what do you guys think of Papa John’s new Papadia?