New Yorkers Are Turning Their Homes Into Virtual House Parties

Self-isolation, it’s a lonely time, however, it can’t keep everyone down – as the people of New York are showing by turning their homes into virtual house parties. Whoever said you can’t have your cake and eat it too is wrong in this instance.

It would appear that life in the city that never sleeps is not pausing its pace for the pandemic – it’s just taking it indoors and online.

As 31-year-old Chelsea Jane Sillars said, “It allowed us to step away from the conversation about corona, which is obviously so all-encompassing, and talk about regular life, which felt really good.” 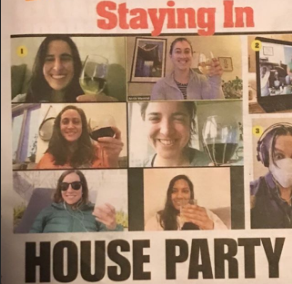 Sillars is only one of many New Yorkers who is putting her daily routine on streaming. For example, she and her friends have twice-monthly dinner parties which they just moved to an online front with the help of the video-conferencing tool, Zoom.

Zoom was allowing Sillars to video-conference her friends every Tuesday, as planned, helping to bring some sense of normalcy to a world that has been turned upside down.

“We needed to connect. This moment where we’re all eating a meal together makes it feel a little less scary,” Sillars commented.

So, how exactly have the people of New York been keeping busy online? In many ways.

One of the biggest ways is through virtual parties. Since St. Patrick’s Day was canceled this year, 34-year-old publicist Jordan Van Brink decided to keep up Paddy’s Day traditions with friends. Since this year meant that New York’s Irish pubs wouldn’t be open to the public serving green beer, Van Brink had his own idea.

Two years ago, Van Brink moved to California. And this year, since Paddy’s Day happened to fall during a time when no one was leaving the house, Van Brink figured it was the perfect opportunity to catch up with friends in New York via Google Hangouts – and there was green beer involved, thanks to some green food dye in the cabinet.

As Van Brink said, “We made sure to make our beers green all night. Our mental health was improved drastically afterwards.”

The coronavirus outbreak really has done a number in bringing people even closer together – even if that closeness is online.

For example, the founder of Untapped New York, Michelle Young, hosted a brunch for 18 friends – all via Google Hangouts, and one of her guests was even as far away as Singapore!

The group have been friends for 15 years, and since this virus outbreak has started, the friends made the decision to do a virtual brunch together every Sunday “until this is over.”

While the virtual brunch date with friends has proven to be a good release for her mental health, Young has admitted that there is no replacement for actually going out for a walk through the streets of New York and dipping into a random restaurant and bar for a quick nibble.

As Young stated, “That sense of serendipity that I get from moving around New York City is gone. It’s that randomness of discovery that I miss out on.”

Art and culture have even been seeing a bit of a flourish during these times, as the Metropolitan Opera started to stream free “Live in HD” performances from its archives. In fact, 33-year-old software engineer Max Parke and his girlfriend decided this was the perfect chance to finally go to the opera. While most would assume that streaming opera from the comfort of their home would be all about comfort over style, Parke and his girlfriend decided to keep up the tradition and get dressed up.

“If you’re going to the opera, you have to dress up,” Parke admitted.

The pair got dolled up in their best, with Parke wearing a bow tie, suit and dress shoes, and his girlfriend putting on an elegant black dress.

They then began a video chat with some other friends of theirs, who also got dressed up, and they all started streaming opera. Turns out, after a bottle of champagne, they were really enjoying themselves.

According to the New York Post, Parke stated, “When going out is OK again we are going to the opera together.”

And the pandemic hasn’t put a damper on the dating scene either, it would seem.

35-year-old Liz, who didn’t want to give her last name, was still keeping up hope of finding her very own pandemic partner. Liz, who works in education technology in Carroll Gardens, matched with someone on Bumble and set herself up a virtual date amid the quarantine.

While preparing for the date, Liz found a reason to get all made up, giving some feeling of normality during self-isolation.

As she said to the New York Post, “I went through all the motions of getting ready for a date.”

While on her date, she said that the pair did their best to steer any conversation away from global occurrences and to treat it like a normal first date where the conversation is dominated by work and families and other getting-to-know-you talk.

“We made a joke about how easy it would be to hang up just to end the date,” Liz said.

However, Liz is willing to break the rule of self-isolation to a certain extent if virtual meet-ups continue to go well.

As she admitted, “I know he likes to ride bikes, I would be totally into that. I will ride 6 feet behind you.”

Of course, you can’t underestimate the power of Netflix and self-isolation – something that is as important as ever these days. So many people have been using technology as a means of organizing virtual movie nights and date nights. Many people have been using apps like Netflix Party, a Google Chrome extension that allows users to watch movies and TV shows together in real-time. Plus, there has been plenty of gamers coming together to continue life as normal amid the self-isolation push on society with lots of different game nights.

So, if you’ve been struggling with ideas for socializing without breaking self-isolation, there is no need to look further than technology for help filling the gap between quarantine and socializing.