The Mysterious Origins of Bohemian Grove

Like many a gentleman’s club over the centuries, the Bohemian Club has a very limited guest list and membership is controlled tightly by rules that are over a century old. The mysterious nature of the club, combined with the high-ranking members which have included U.S. presidents and several Nobel Prize winners, has made this club the source of many rumors. But, how did this club start? And why are its rituals so secretive? 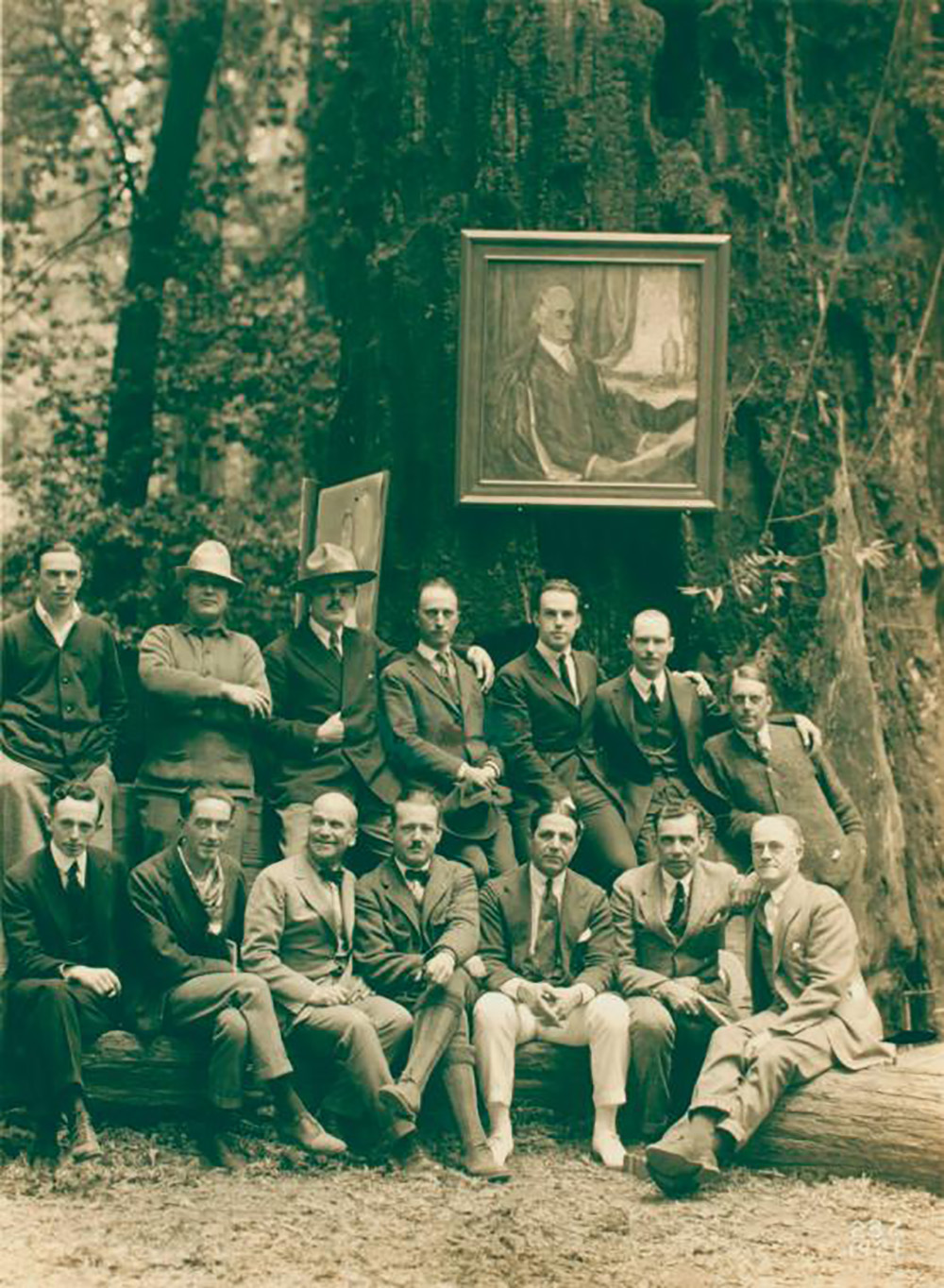 In the 20th century many men of of power have been associated with Bohemian Grove, the camping grounds owned the club. But, the history of Bohemian Club goes all the way back to the 1870s. It was in 1872 that Henry “Harry” Edwards created the club in San Francisco. In 1878 the club began to rent campgrounds at Bohemian Grove and in 1899 the club purchased the land after having gone there every year. 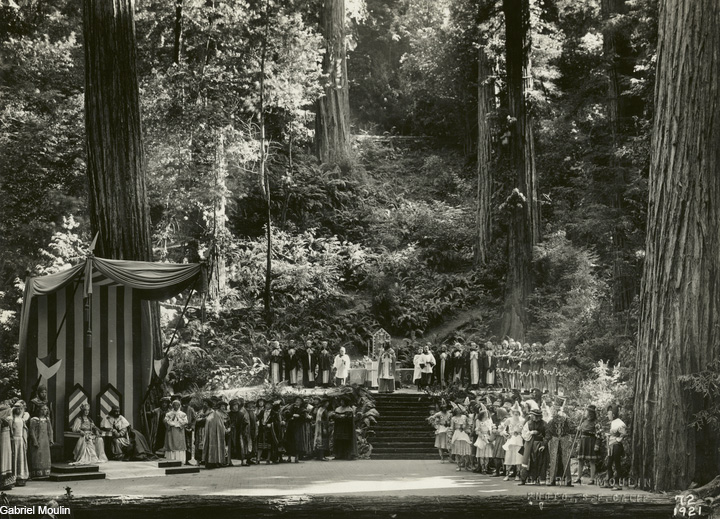 The 2,700 acre club lies in the heart of the Redwood Forest, near Monte Rio, California. The club was begun as a place to relax for artists, writers, and other men living “bohemian” lifestyles, the name having just become fashionable around the middle of the 19th century. 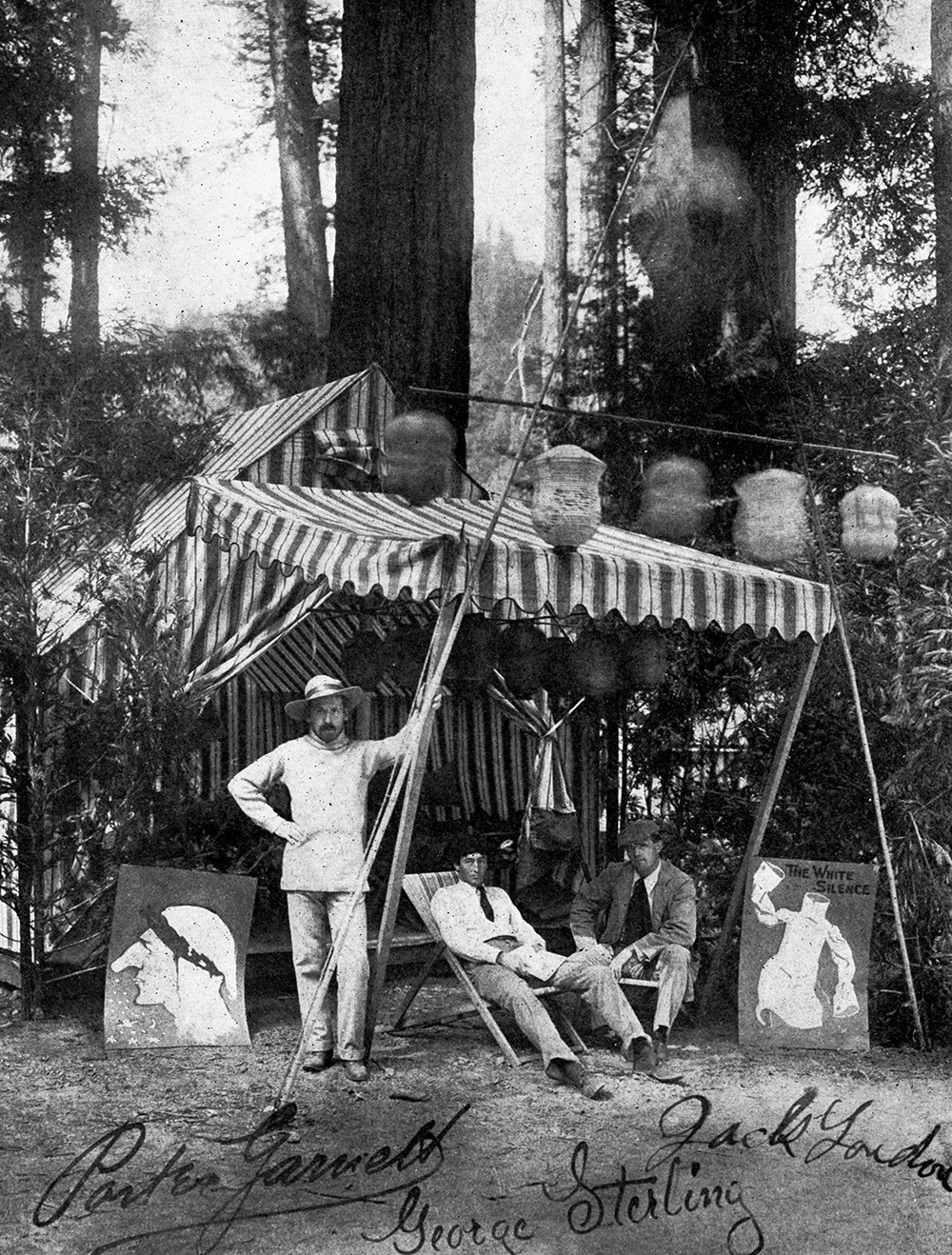 Around the turn of the century the group was reported to have increased in number from their starting size of 100 men to a group of around 400. Members around that time included Porter Garnett, George Sterling and author of Call of the Wild, Jack London (all pictured above at Bohemian Grove).

The club is said to be based on a love of the outdoors and reverence for nature, with plays and speeches that range in topic but usually allude to pre-industrial man in some way. In the 1918 book The Grove Plays of the Bohemian Club, plays like St. Patrick at Tara which tells of the Celts and their struggle with Christianity and The Cave Man, which revels in the pre-civilization era of the distant past, seem to pay homage to a time before the structured and rigid rules of society. The club’s plays have also been accused of being linked to pagan rituals or devil worship, but club representatives strictly deny this. 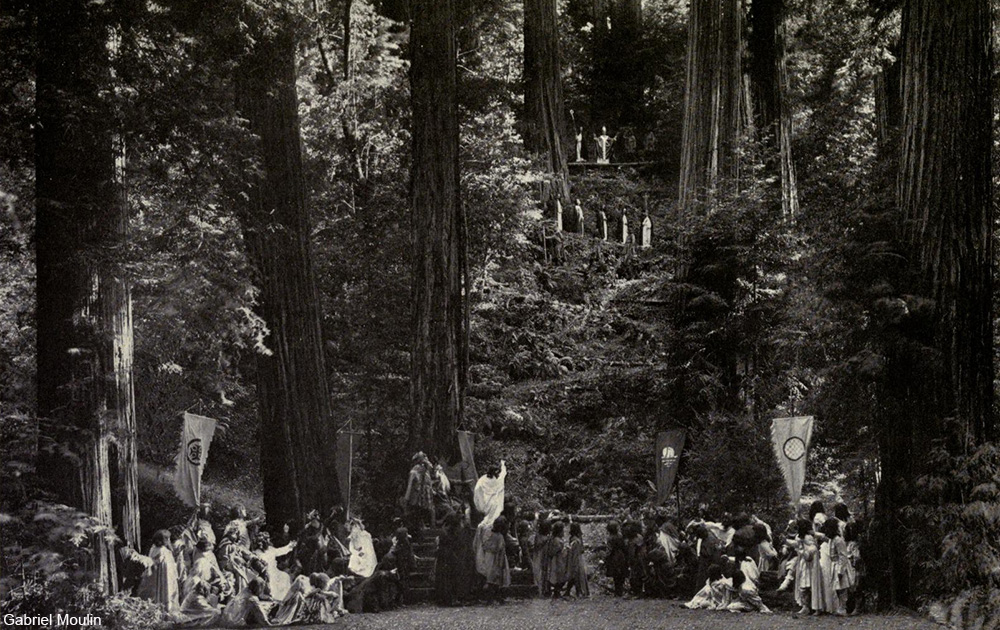 At the time the term “bohemian” referred to the Western part of what would later become the Czech Republic and the Romani people who were mistakenly thought to have hailed from the region. The term conjured up images of European artists living unconventionally on the edges of society, which the club embraced to reference artists instead of Travelers.

Around the turn of the century, club members were still entranced with the concept of the bohemian as the outsider and so even welcomed women who shared their ideals into their club. The four women who became honorary members between the 1870s and the last female member’s death in 1928 were either wives of founding members or poets. No women after 1928 have been members.

Since then the goals of the club seem to have changed quite a bit, with members in the modern era that included scientists, political leaders, and other men of means.

The club’s motto “Weaving spiders come not here” is said to be an anthem shunning the business networking that so often goes on in clubs. However, many powerful connections are made at the club these days, albeit usually one-on-one instead of as a group. Famously, in 1942 the Manhattan Project was initiated at Bohemian Grove, a far cry from leaving business at the gate. 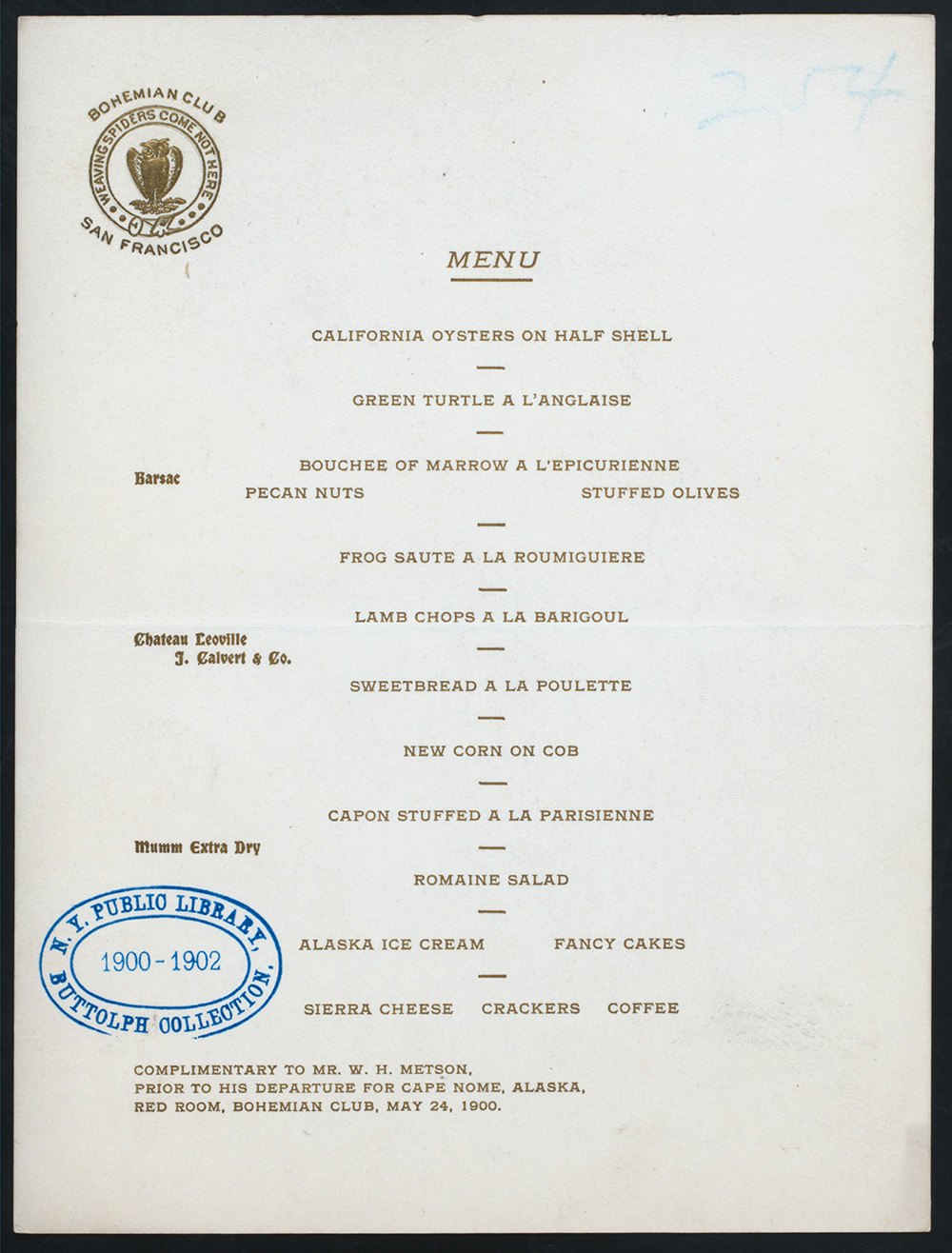 The motto is clearly visible on this 1900 menu from a dinner at the Bohemian Club. Via/ NYPL Digital Collections

Many republican U.S. presidents on the 20th century have at least been guests of the club, though only 5 have been confirmed to have been members (Theodore Roosevelt, Herbert Hoover, Richard Nixon, Ronald Regan, and George H.W. Bush).

The season opens for the Bohemian Club in the summer months, when all sorts of ceremonies (including the High Jinks) take place. Members are allowed to bring visitors, but women and children must leave before nightfall. Having no female members (and until recently no female members of staff), the club has had to defend itself in court many times during various discrimination suits. After a 1981 court decision, Judge Robert Kendall noted that the club had a “legitimate defense” in not hiring women because the members “urinate in the open without even the use of rudimentary toilet facilities” and that women in the vicinity might “alter the behavior of the members.” 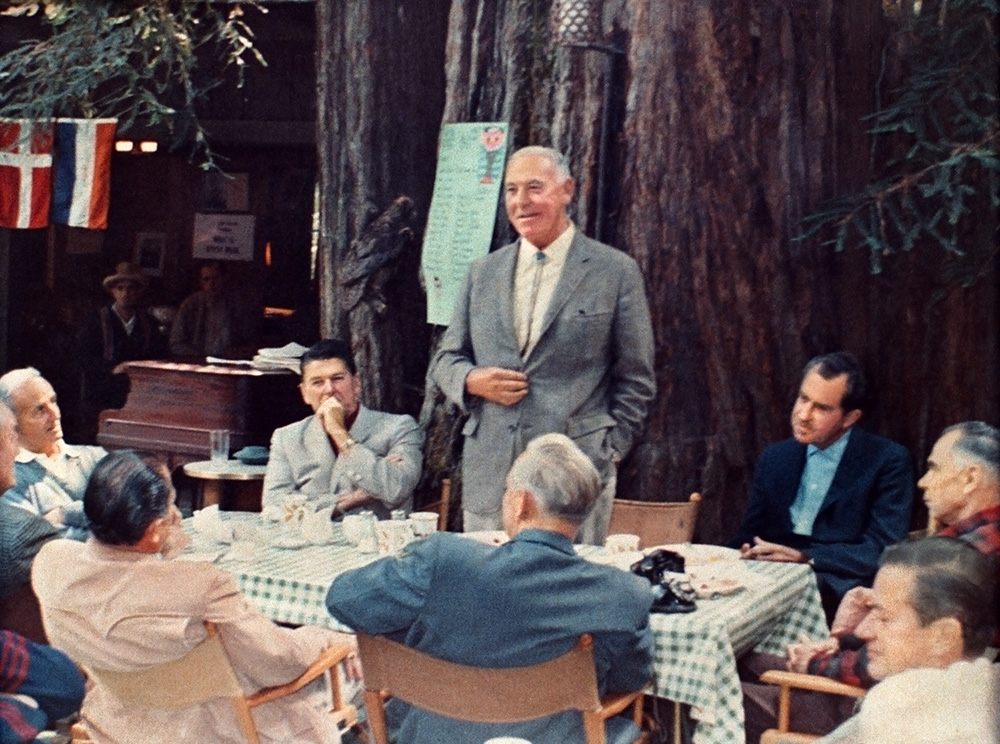 Ronald Regan and Richard Nixon in 1967 at Bohemian Grove. Via/ LBL National Laboratory

The club is both secret and high profile at the same time, which is why so many curious journalists have attempted to infiltrate the order. The November 1989 issue of Spy Magazine featured an exposé on the club by Philip Weiss who described the place as being where heads of state mingled and enjoyed concerts while drinking heartily and generally being a bad influence on each other.

Weiss was not the only one to infiltrate the group over the years, but many of the estimations about what goes on a Bohemian Grove agree that it’s where rich and powerful men go to let loose in unconventional ways.