When Marilyn Monroe married baseball slugger Joe DiMaggio it seemed like the blending of two American heroes, a match made in heaven. However, the marriage was troubled from the start with her fame outshining his on a regular basis – most notably on their honeymoon when she had to detour to perform for the troops for a USO engagement following the Korean War.

Less than a year after they were married Monroe announced that she was be seeking a divorce from DiMaggio citing mental cruelty. The dress she wore during that press conference has recently sold at auction for a stunning price. 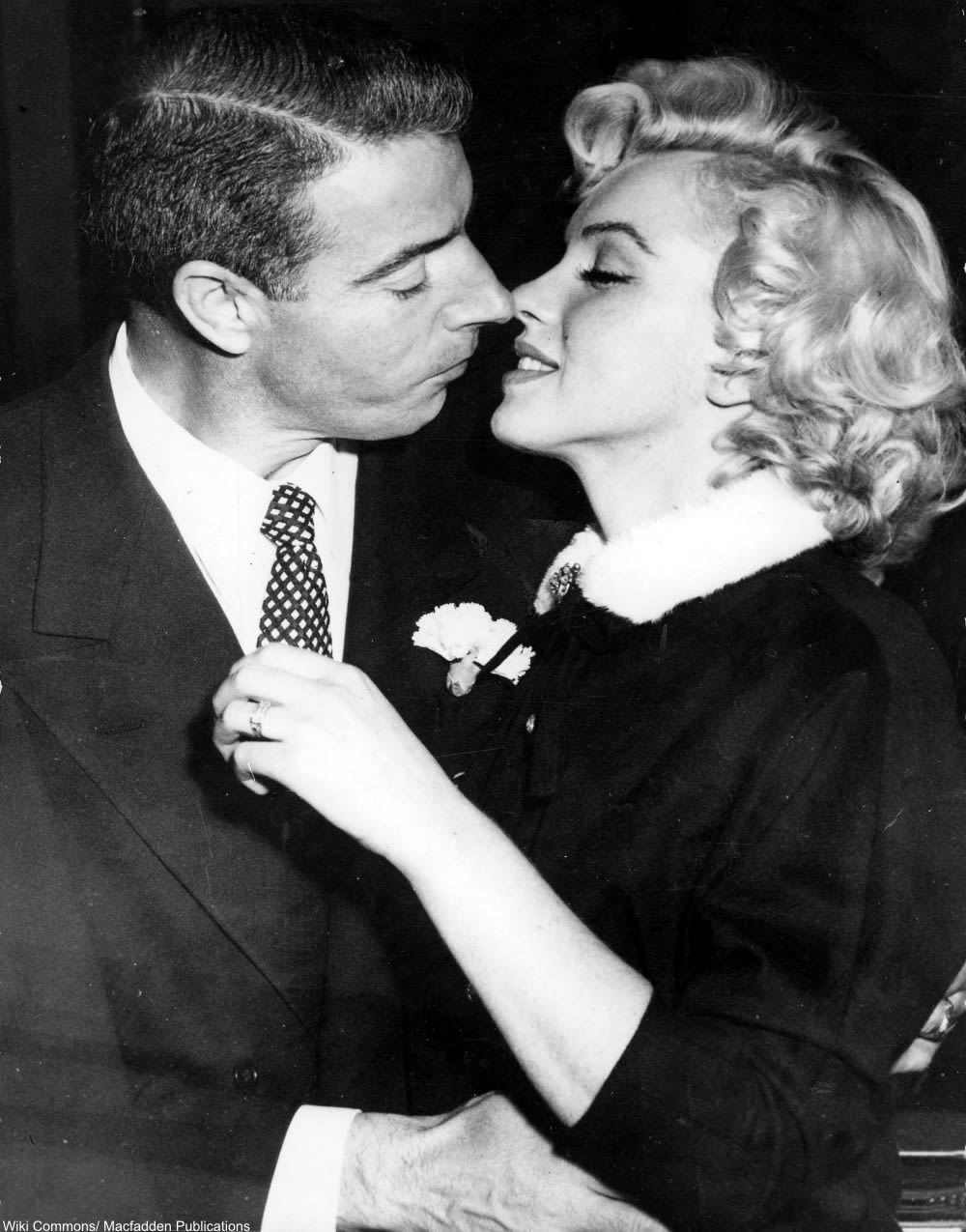 DiMaggio was rumored to have been extremely jealous and controlling of Monroe, traits which flared up after she gained national attention for the risqué skirt blowing scene during the filming of The Seven Year Itch. The marriage only lasted for 10 months, and the world was stunned that such a seemingly wonderful match could turn out so wrong.

Monroe had said afterwards that what DiMaggio had wanted was the traditional Italian wife who would devote herself to her husband, something she could not give him. 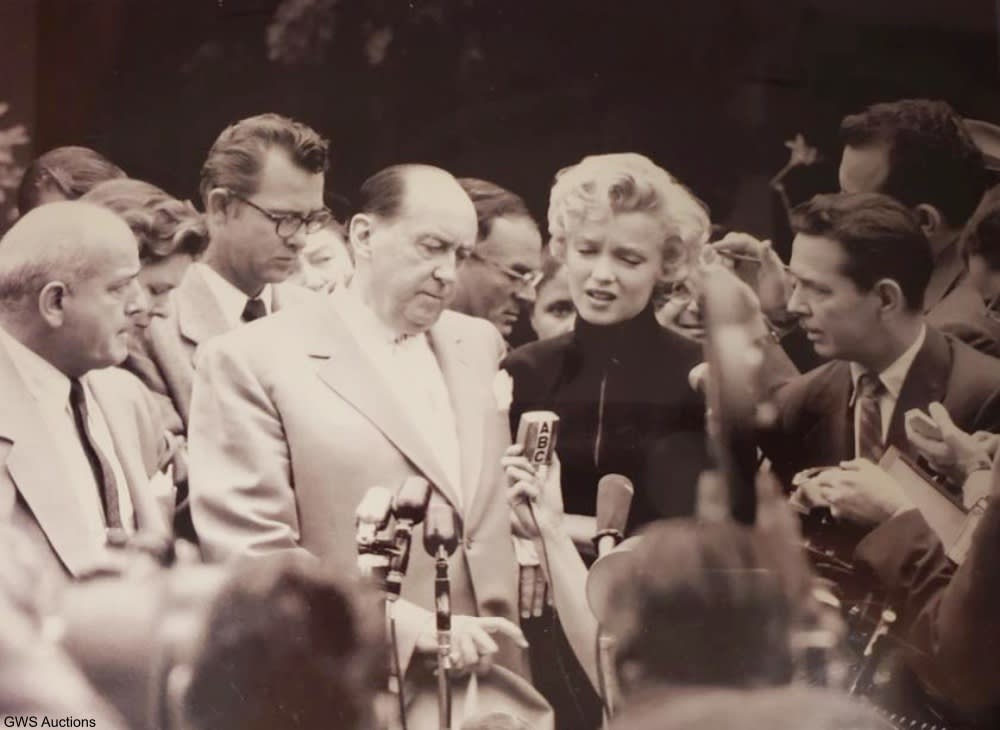 During the press conference her lawyer claimed that the couple had a conflict of careers, “as incredible as it may be” and that divorce was “inevitable.” Afterwards, Monroe was photographed and filmed in the car driving away, in that same dress, crying and generally looking ill at ease over the divorce.

The dress that Monroe wore during the October 1954 press conference to announce the impending divorce was recently up for auction and far exceeded the initial estimate of what it might sell for. The black dress has a zip up the front and high turtleneck top, which Monroe wore the day of the press conference cinched with a leather belt. The calf-length wool dress is now considered modest for the bombshell actress at the time, although it must be said that the dress was still rather form-fitting. 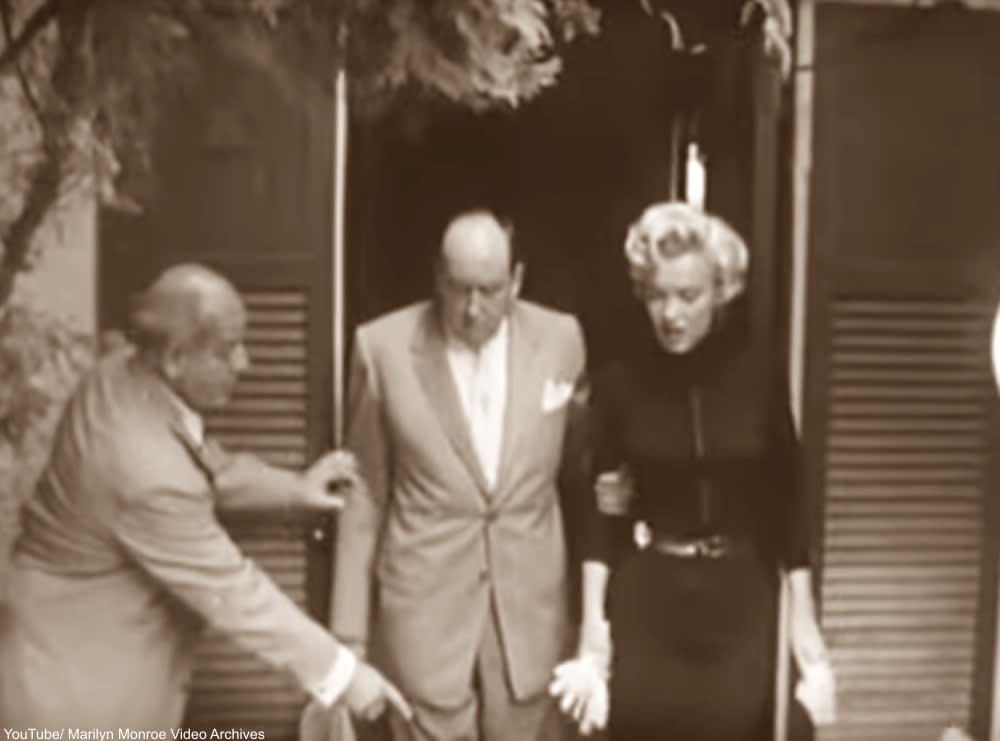 The dress went up for auction on March 30, 2019 during the Archives of Hollywood & Music sale from GWS Auctions and was obtained from a private collector. The starting bid was set at $20,000, but in the end the final price came to $100,000!

Also featured in the auction were articles of Marlon Brando’s clothing and memorabilia related to Hollywood, none of which sold as spectacularly as the Marilyn Monroe dress. However, a guitar once owned by Elvis Presley and radio that belonged to John F. Kennedy sold well at $50,000 and $9,000 respectively. 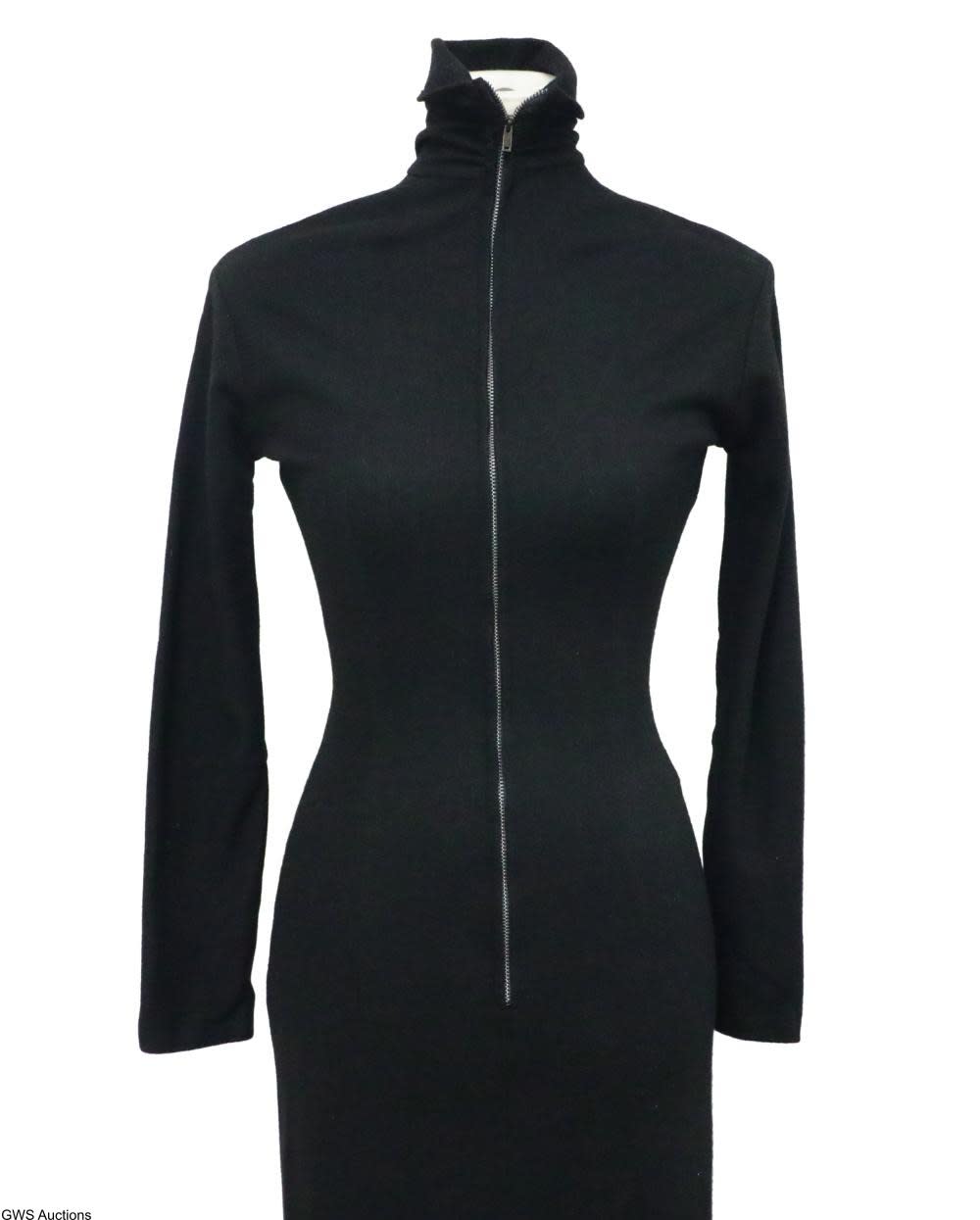 The other outfit people associate with the DiMaggio/ Monroe divorce is the dark wool suit she wore to the courthouse to finalize the divorce, which she wore with a small matching wool hat. This outfit, too, was rather modest when compared with many of the costumes she wore on screen. 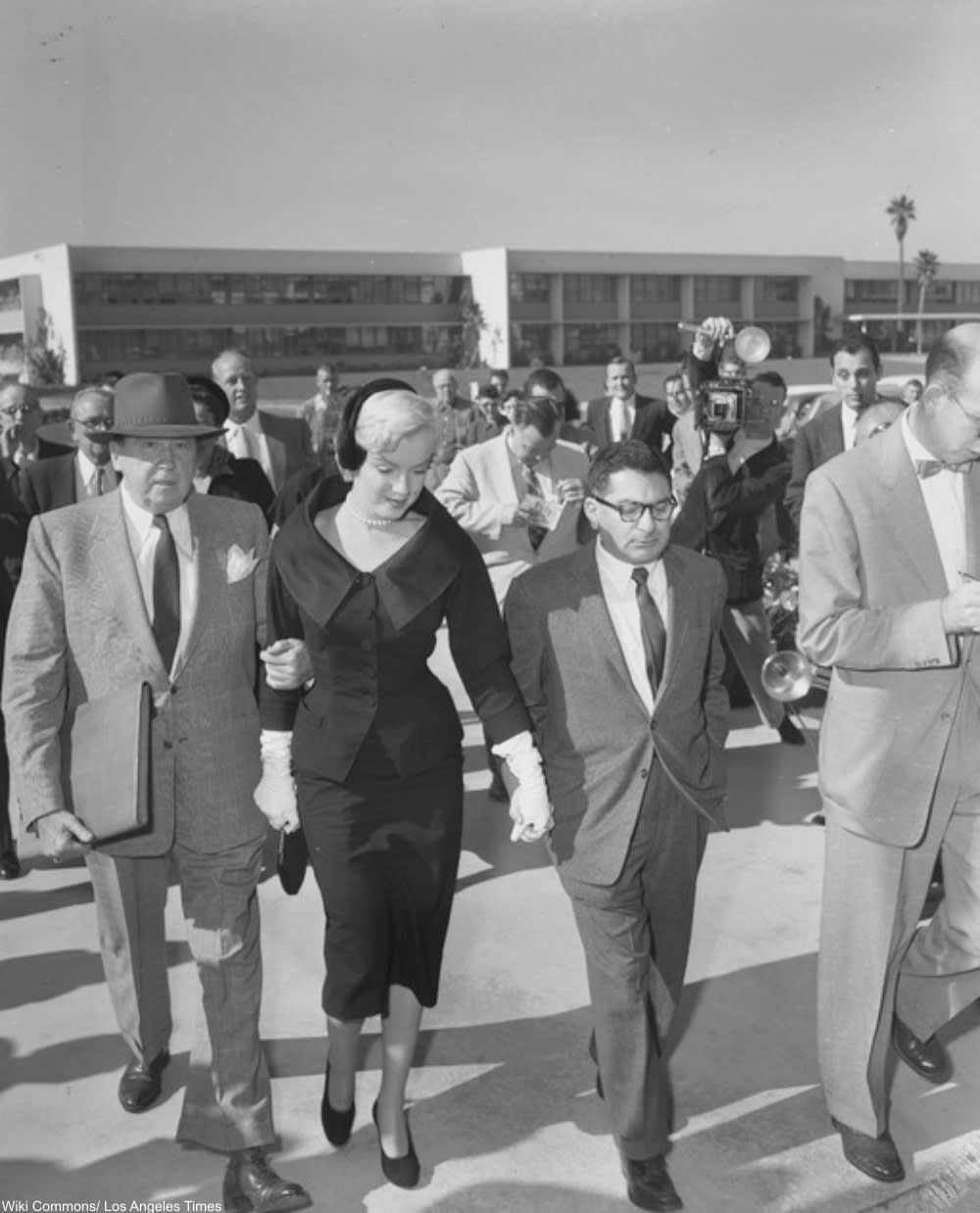 Despite their differences, it has been said that before her overdose in 1962 that the pair had gotten back together and were seriously discussing getting remarried. It seems, given the available evidence, that each was the great love of the other’s life. 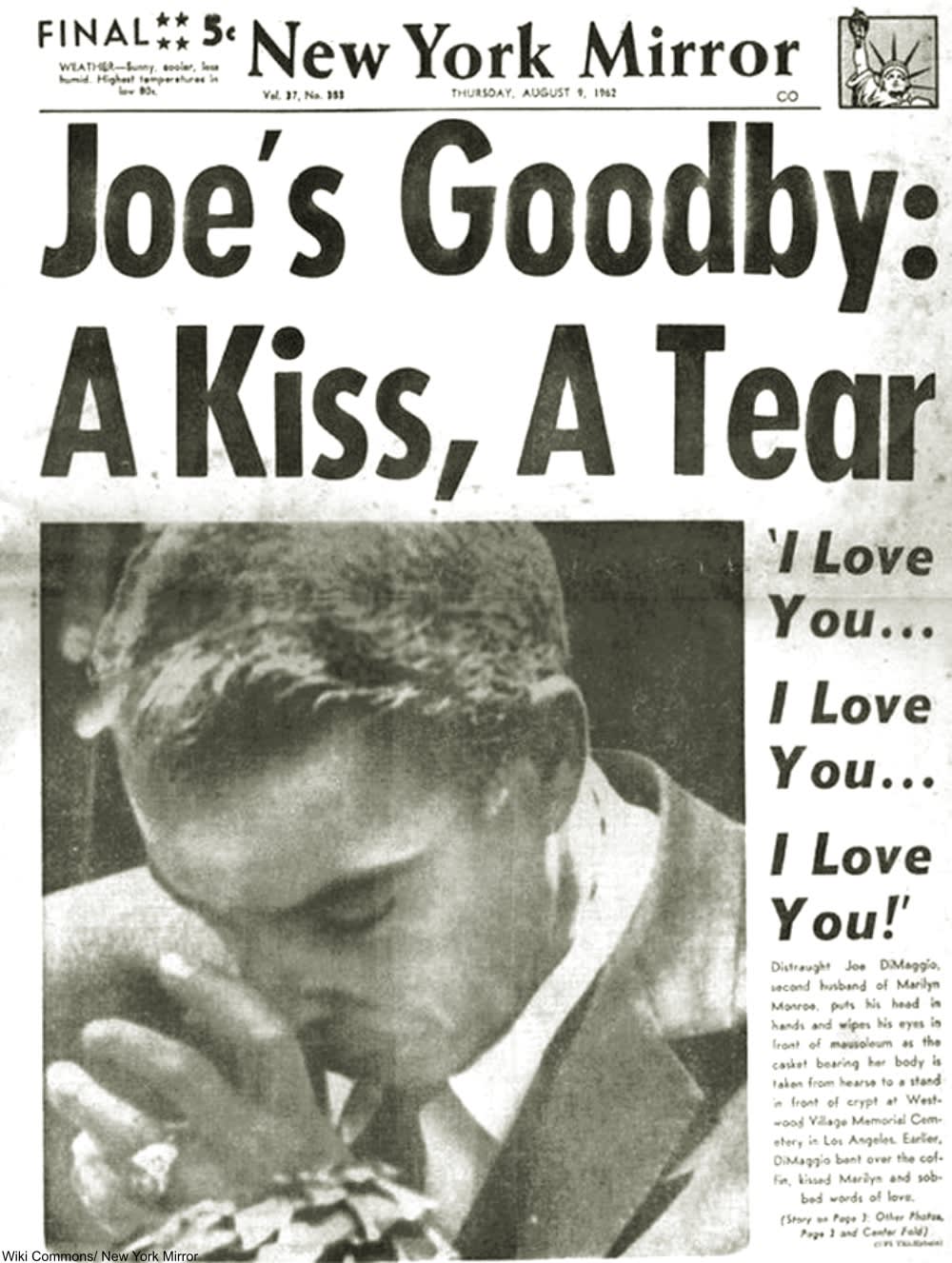 The slinky, zippered, black dress is seen as one of the most iconic pieces of clothing from Monroe’s personal life, separate and apart from the glittering costumes she wore on screen. Have a look at footage from that 1954 press conference and the memorable black dress that Monroe wore.

Marilyn's favorite bungalow now comes with a supply of Chanel No. 5: Click “Next Page” below!