The 1880 “Folly” House That Has a Mysterious Floorplan

In the town of Kernersville, North Carolina, there lies a unique house that has a lot of unusual architectural details. The winding and narrow stairs and hallways lead up and down, seemingly for no reason at all. The strange configuration of the house puts one in mind of the Winchester Mystery House. But, this house was finished in 1880, 6 years before that house was purchased by Sarah Winchester.

The building has been named for the original owner, Jule Gilmer Körner (pronounced “Kerner”), who christened the house “Körner’s Folly” after rumors spread around town that his construction was sheer folly. He had the name spelled out in tiles on the front porch and then invited the public to an open house upon its completion, thereby taking back the insult and showing the town what he was capable of. Ever since then the house has been a subject of intense fascination for the locals and tourists alike. 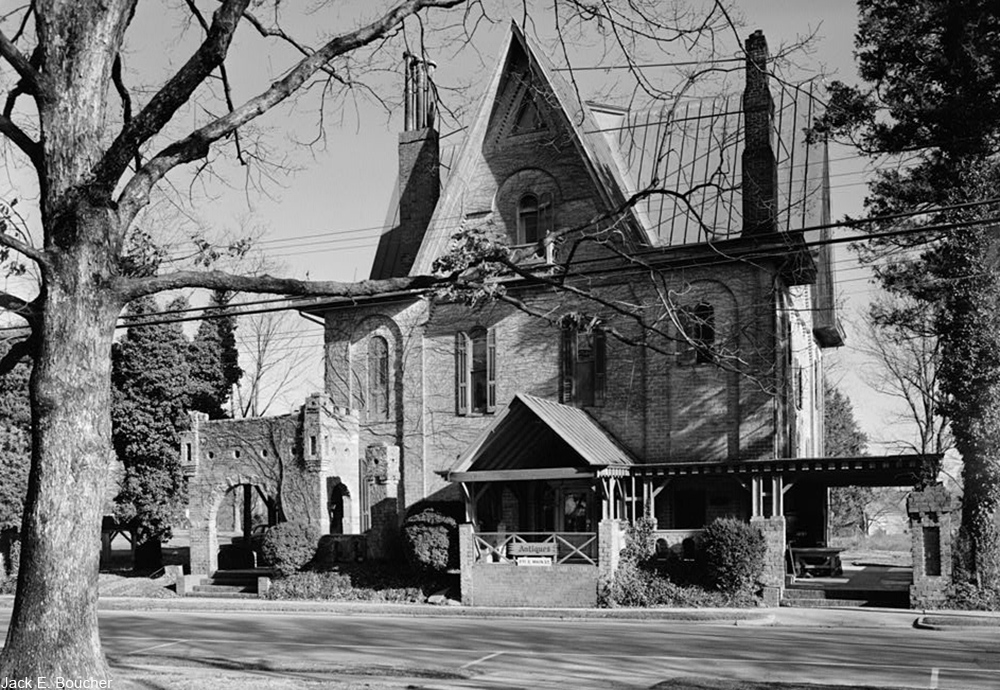 At the time this photos was taken the house was being used as an antique store. Via/ Library of Congress 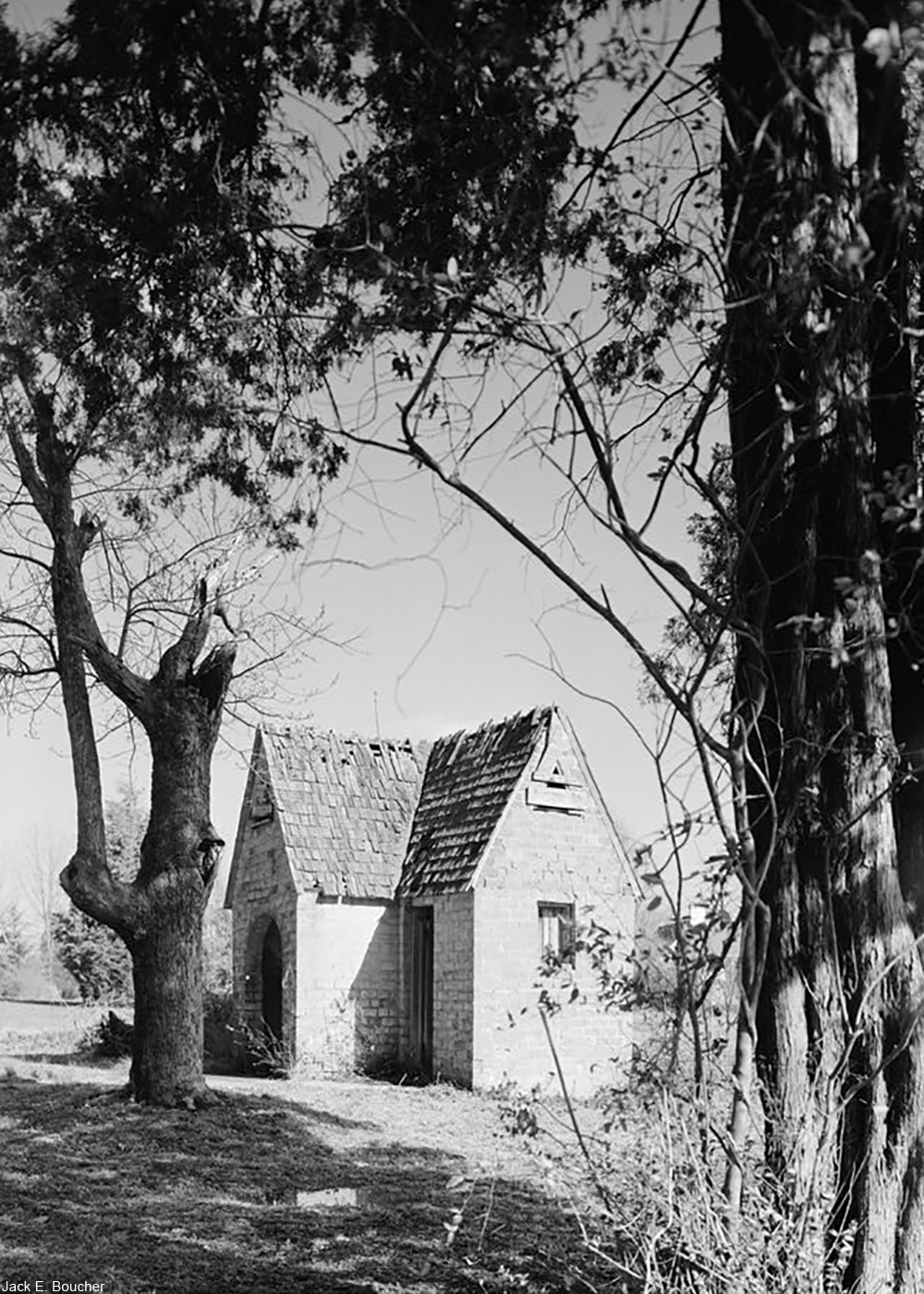 Some features of the exterior of the building are ornate brickwork, oblong arch windows with matching shutters, and a mix of architectural styles. The old home featured an outdoor privy (above), somehow charming with its arched brick construction. 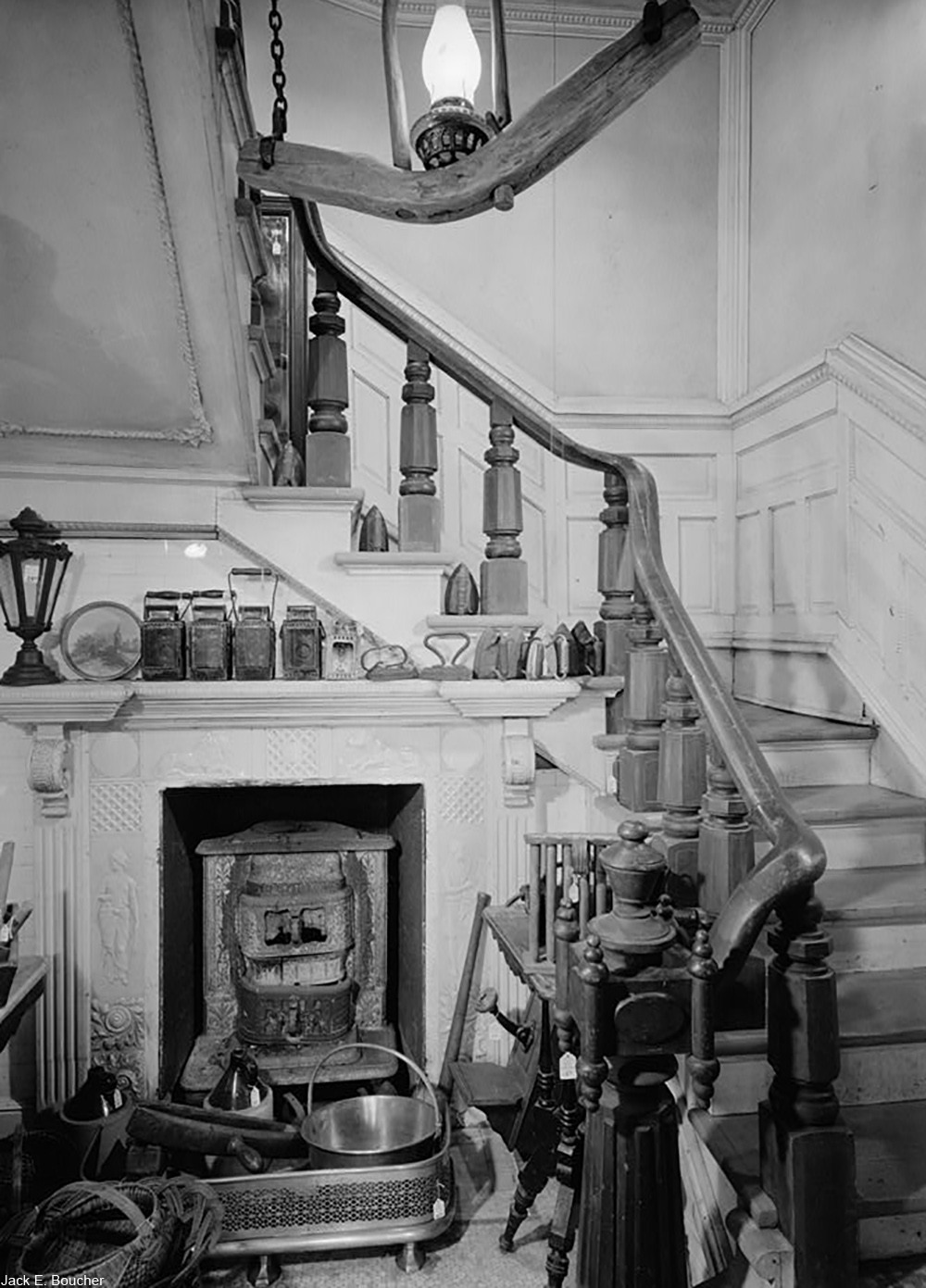 Inside there are unexplained components like a fireplace under a stairwell and constricted doorways that don’t make a ton of sense. One reason for this strange way of designing was said to have stemmed from Körner’s deep fear of fire. This would explain the halls lined in tile that go up and down- they might have been thought to prevent the spread of fire from one part of the house to another.

The house has 22 rooms and 15 fireplaces, all of which were intended to display the vast design knowledge of the well-traveled Körner. The place even has a stage room, called the Cupid’s Park Theater, with vaulted ceilings painted like the old cathedrals of Europe! Other features include a compendium of plasterwork- angels, beaded trim, corbels- you name it. According to the Körner’s Folly Foundation, the home was intended to showcase his interior design skills to clients, as a sort of show home for his business (eccentrically-named the “Reuben Rink Decorating and House Furnishing Company”). This explains why no two doors, or ceilings, or hallways are alike.

Juls Gilmer Körner and his wife in the Cupid’s Park Theater. Via/ Körner’s Folly Foundation 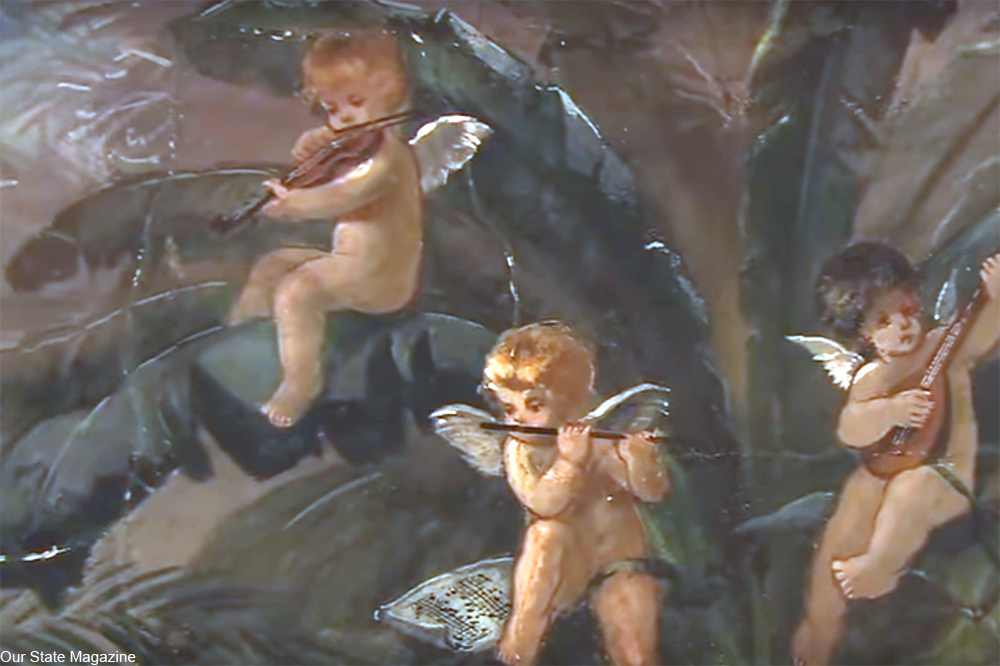 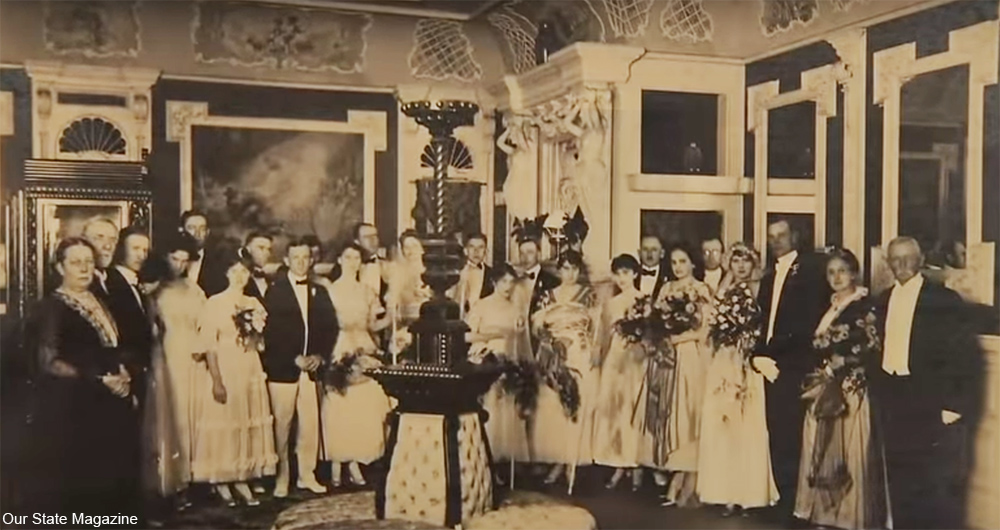 The house was billed as the “Strangest Home in the World” and Körner the “Man of a Thousand Peculiarities” at the time, no doubt hype efforts on his part. But, it wasn’t just ornaments and moldings that made the house special. A series of tunnels acted as a complex ventilation system for the brick house in a time long before central air. Air was drawn up from cool chambers under the home and this airflow also allowed the fireplaces to draw without a single hiccup.

Körner worked on the house from 1878 until his death in 1924 and he never saw the building as all the way finished, despite the many adornments and decorations that lined the walls and floors. Körner and his wife had two children and the young family lived an eccentric life in their grand home with their pet raccoon. 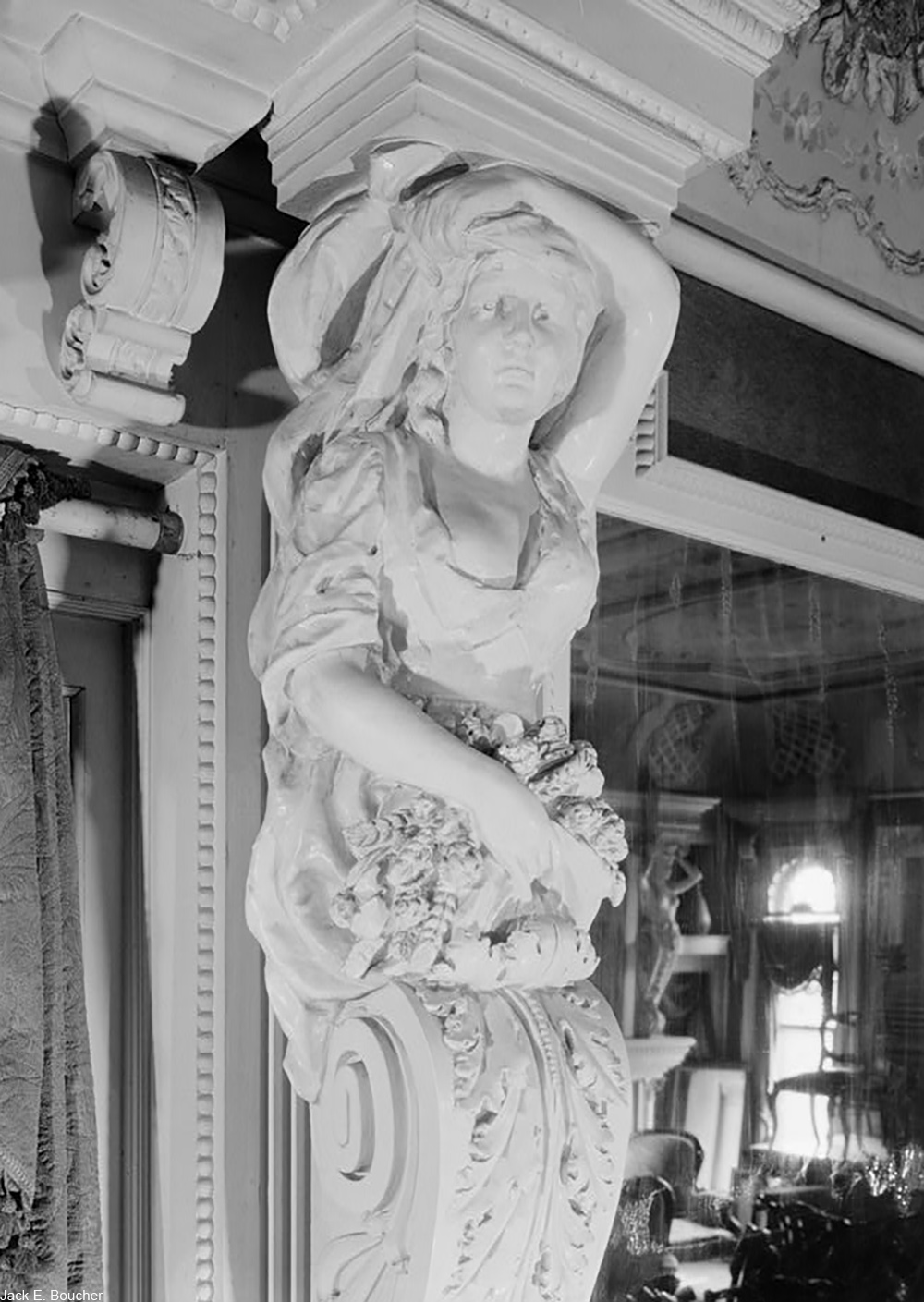 The Körners also had a servant who lived on the property, a slave named Clara whom his father had bought and freed. Körner built her a small house at the rear of the property and when she died had her grave placed beside the family plot with a brick enclosure built over to unite them both (it was a white only cemetery and her grave sat on adjoining land).

Sadly, the house was abandoned after World War II, during which time some aspects of the house began to fall into disrepair. But, Körner’s Folly was saved from demolition in the 1970s when a group of concerned 26 citizens intervened.

Thanks to the foundation that runs it that is changing and the building has a new lease on life. The house, and the family, remain a unique part of the area’s history to this day and the site offers tours of this incredibly unique building.

Have a look at the house in more detail, including the funky passageways, in the video below.