Add another project to Joanna Gaines’ list! Just when we thought the mom of five, cable network head, and all-around businesswoman couldn’t take on just one more project, she proves us wrong with another announcement.

This time, it’s one that we can all enjoy regardless of our proximity to Waco, Texas. Joanna has announced that she’s coming out with another cookbook! Magnolia Table, Volume 2 is the exciting follow-up to her debut bestselling cookbook, which came out in April 2018.

The original Magnolia Table served up some of the family’s favorite recipes from over the years. For Volume 2, Joanna got to work in the kitchen, coming up with new recipes to share with her family.

Once those recipes hit her oh-so-high standard of perfection, she was ready to get writing and share those recipes with the rest of us. While the cookbook won’t be in stores until April 2020, it’s available for preorder now. Joanna even sweetened the deal by sharing two recipes on her blog, just in time for Thanksgiving.

Joanna Gaines is at it again. The woman seems to be a true master of multitasking, raising a family of five while pulling off a wide array of business ventures and making it all look oh so easy. It’s truly amazing.

In case you haven’t heard what Joanna’s up to lately, she and Chip purchased a hotel, which they are renovating. The couple hopes to open the hotel, which emphasizes the feeling of being at home, in 2021.

In the blog announcing the venture, she acknowledged how what they’re doing (and are always doing) might seem chaotic and crazy. “From the outside looking in, it may seem like we are constantly tackling something new, sometimes even before we’ve completed what’s in front of us,” Joanna acknowledged.

“I have had moments where I’ve wondered to myself if we might be overreaching,” she noted. “But what I’ve grown to recognize is that this is who we are. Chip and I started out as small business owners who were drawn to challenging projects—and we’re still those people—especially when it involves acting on things that we believe in and care deeply for.”

Joanna’s latest project is one of her solo ventures. Make no mistake, however; it’s looking to be just as impressive as everything else we’ve seen from the interior design queen. Joanna has announced she’s coming out with a new cookbook.

Magnolia Table, Volume 2 is the follow-up to Joanna’s bestselling Magnolia Table cookbook, which came out in April 2018. Not only was the book a bestseller, but it came second in sales across all categories, behind Michelle Obama’s Becoming.

When Joanna saw how much families across the country loved the recipes that her family had been enjoying forever, it inspired her to double down on her commitment to the value of food being shared.

Joanna spoke more to this in her blog about the announcement. “What made this second experience so unique was that most of my family’s tried-and-true recipes were already shared in the first cookbook, which required us to get in the kitchen, start from scratch, and develop a whole new collection of recipes for gathering family and friends around the table,” she noted.

The cookbook won’t just feature recipes that Joanna shares with Chip and the kids. It’ll also share recipes from their restaurant, Magnolia Table, as well as Silos Baking Co. and their new coffee shop, Magnolia Press.

Magnolia Table, Volume 2 will feature 145 new recipes from breakfast to dinner, plus breads, soups, and sides. While the idea sounds absolutely delicious already, the togetherness of mealtime is at the heart of each recipe. 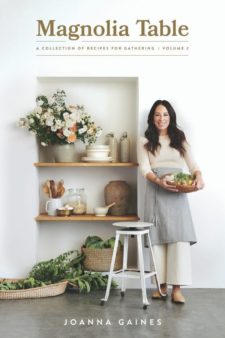 While Magnolia Table, Volume 2 won’t be out until April 2020, it’s available for preorder now! With recipes for dishes like Pumpkin Cream Cheese Bread, Grilled Bruschetta Chicken, and Zucchini-Squash Strata, it sounds like a must-buy.

Luckily, you won’t have to wait until April to try out some of the delicious recipes this cookbook has to offer. Joanna has shared two recipes ahead of the book’s release and just in time for Thanksgiving. 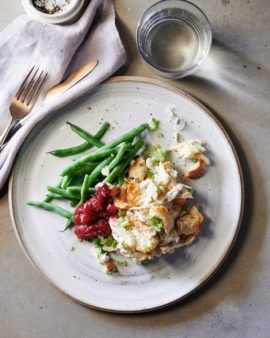 Joanna shared the recipe for Friendsgiving Casserole on the Magnolia website. “Friendsgiving Casserole is one of my kid’s favorite dishes and a go-to of mine when I want to take dinner to a new mother or a family who could use a hot meal—mostly because it’s easy to love, even for the pickiest eaters,” she noted.

She also includes her recipe for Holiday Cranberry Sauce, which pairs wonderfully with the casserole. With recipes like this, every day can feel like Thanksgiving in your home, with a hot meal and a house full of happy faces and full bellies.