It’s amazing how creative people have gotten with food. You can make a dessert that resembles just about anything.

Siew Boon is one of the many culinary designers taking a creative approach to food. She runs a business called Jelly Alchemy, where she creates beautiful 3D “jelly cakes.” The cakes, which are in fact edible, are adorned with anything from serene flowers to beautiful underwater scenery.

Siew began her journey with these cakes after taking a class taught by a famous 3D jelly artist in 2016. When she returned to Sydney, Australia, where she resides, she decided to begin a business with her talents.

Unfortunately, in 2017 Siew was diagnosed with stage 3 breast cancer and had to put her blooming business on hold while she underwent treatment. She still practiced her craft when she was feeling well enough to. Thankfully, Siew is doing better now and has returned to bringing people joy with these picturesque cakes. 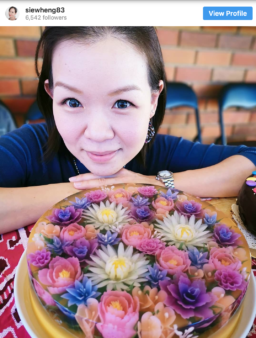 Siew Boon first discovered jelly art in 2016. She attended a class held by a famous 3D jelly artist and fell in love with the medium instantly. Siew instantly knew this was something she wanted to work with more. 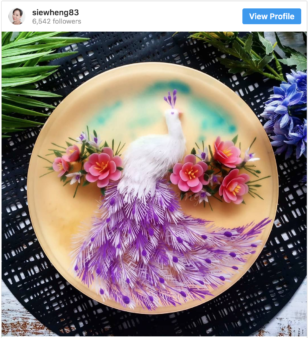 The cakes can take as long as four hours to perfect. Siew’s first creation came when a friend asked for a cake decorated with roses for a celebration. The way these cakes are created is very interesting and involves injections of natural coloring into a mold of seaweed jelly. 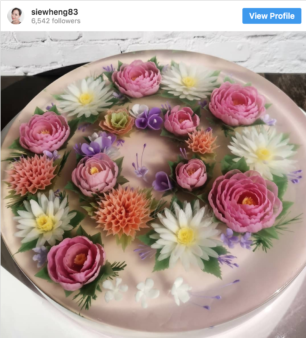 If you’ve never heard of these types of cakes before, there may be a good reason. Although popular in Southeast Asian countries like Vietnam and Malaysia, the pretty cakes haven’t quite taken off in other parts of the world.


Siew starts with clear jelly. Once it has hardened, she uses different syringe-like tools to inject edible dyes into the jelly. Each type of shape requires different techniques. The flowers that often adorn jelly cakes can be as simple as an injection, or they can require more complex tools. 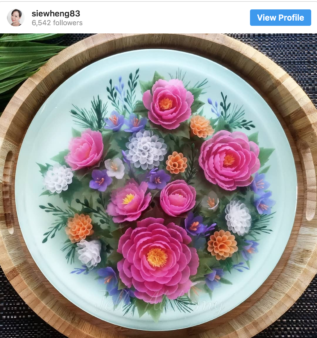 “The designs are injected into a clear jelly canvas petal by petal and made upside down!” Siew revealed to Bored Panda. It takes a lot of precision, but Siew has clearly mastered the process. As people learned about her cakes, the demand for them went up significantly. 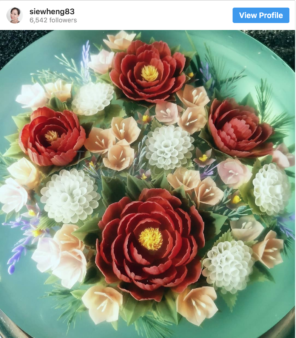 Once Siew is satisfied with a design, she pours a layer of hot jelly over the cake to seal it in. That means she doesn’t get to really admire the finished product until that layer hardens and the cake is flipped back over. 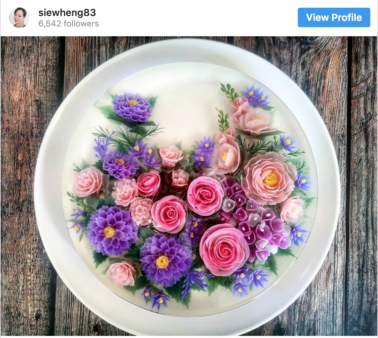 Different decorating techniques are used depending on the region. As Siew explained to My Modern Met, “In certain countries like Mexico, gelatin is preferred to create the clear canvas but in Southeast Asia, we generally use a type of seaweed jelly powder and sugar to make it.” 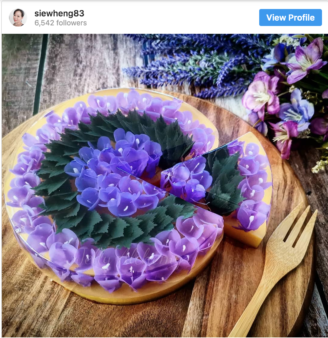 There’s also a lot of creative wiggle room when it comes to coloring. “The color base can be made out of any ingredients that you like, for example, juice, flavored milk, cordials, etc.,” Siew explained. 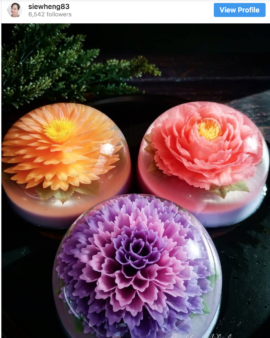 As she continued to hone her craft, she began documenting her efforts on social media. While it proved to be an excellent business move, for Siew it was more about the actual craftsmanship of the jelly cakes and the way they made people feel.

“Some receivers even teared with joy when they received the 3D jelly cake,” Siew told Bored Panda. 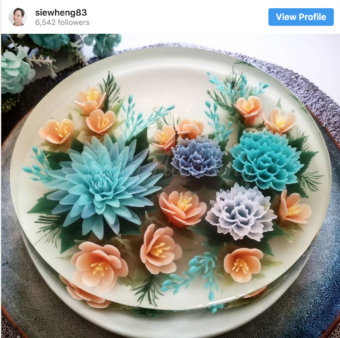 At her home base in Sydney, Australia, Siew decided to go full time with the jelly cakes. She called her business Jelly Alchemy. Unfortunately, as things were taking off, Siew received some bad news that would derail her plans. 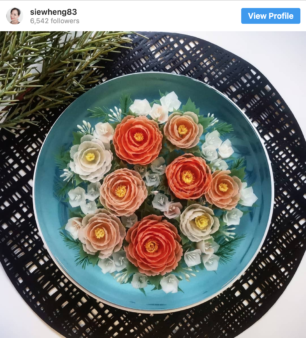 In late 2017, Siew was diagnosed with stage 3 breast cancer. It forced her to put her budding business on hold, although she continued practicing her craft when she felt up to it.

“I was determined not to let cancer get in the way from doing what I loved,” she explained. 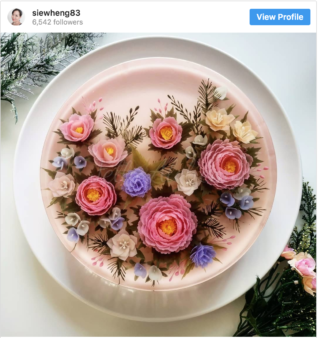 Siew even made jelly cakes for the doctors and caregivers who helped her through a difficult time. “During my battle with breast cancer, focusing on creating beautiful 3D jelly cakes helped to shift my focus away from the physical pain and negative thoughts,” she noted. 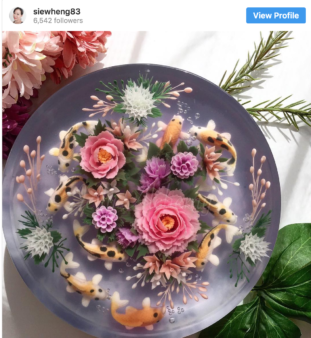 Thankfully, Siew is doing much better health-wise. Now she focuses on how the cakes can bring joy to other people, putting her heart and soul into every design. It’s far from easy, but it’s the most rewarding part of the process for her. 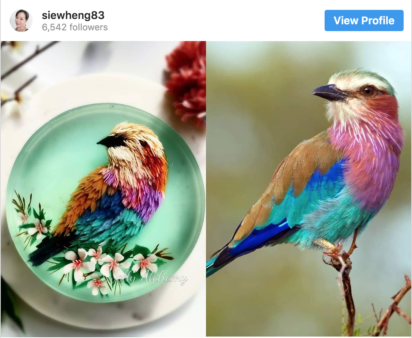 Siew doesn’t just stick to floral motifs. She also has created other natural imagery that looks splendid on these cakes. For example, this cake was outfitted with a bird that looks pretty lifelike and must have taken the utmost precision. 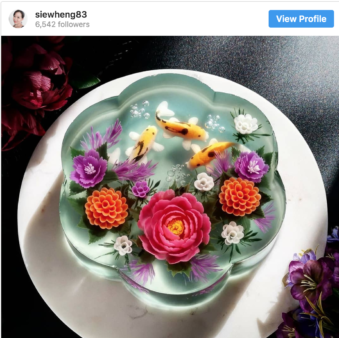 She’s also been able to imitate the impression of looking down into a body of water. Her cakes that feature fish and bubbles can easily be mistaken for a glimpse at a pond ecosystem, but they’re actually a tasty treat! 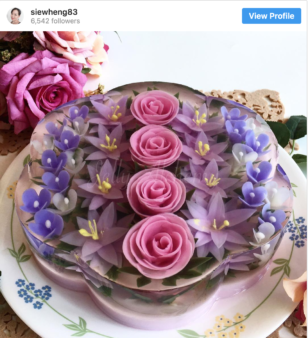 Siew’s designs are especially incredible when you consider that she has reached this level of mastery after just three years of making jelly cakes. The insets look as if they were painted by a master artist. 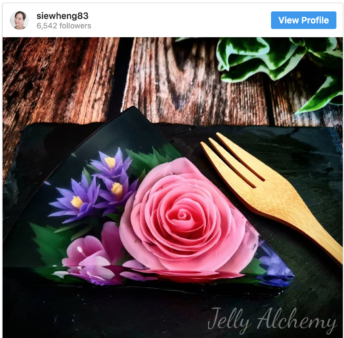 Customers Down Under seem to really love Siew’s 3D jelly cakes, where she runs her business. Jelly Alchemy has an impressive 4.9 rating on Facebook and lots of positive feedback from happy customers. 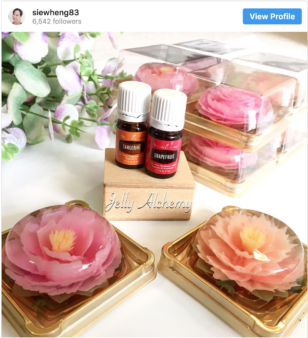 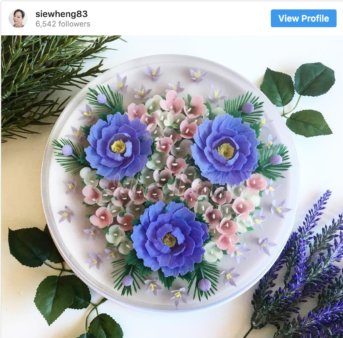 What’s also great about the 3D jelly cakes is that everyone can enjoy them. Because of the use of seaweed jelly instead of gelatin, as well as the natural coloring elements, the cakes can be enjoyed by vegetarians and vegans guilt-free! 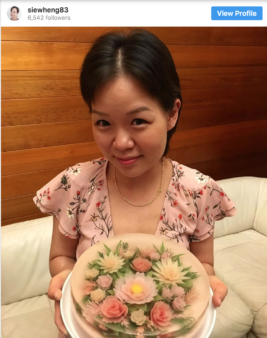 Siew has truly created something breathtaking with this business. She takes these cakes to a heightened level of artistry that few have demonstrated before. Although she has a lot to be proud of, she has others at the forefront of her mind when making these beautiful cakes.

“The most satisfying part of my job besides showcasing my creativity is to be able to bring joy to others,” she humbly said.