Historic Jail Is Transformed Into A Swanky Hotel

A jail that was one time found in Boston is now housing people in a much kinder way.

Originally, the building was the Charles Street Jail in Boston but now it is a luxurious Liberty Hotel with almost 300 rooms and luxury suites that overlook the nearby Charles River. The prison was a national historic landmark design by some of the most accomplished architects in Boston at the time, prison reformer Rev. Louis Dwight and Girdley James Fox Bryant. The jail was built between 1848-1851.

A view of the Boston skyline is available from some rooms: 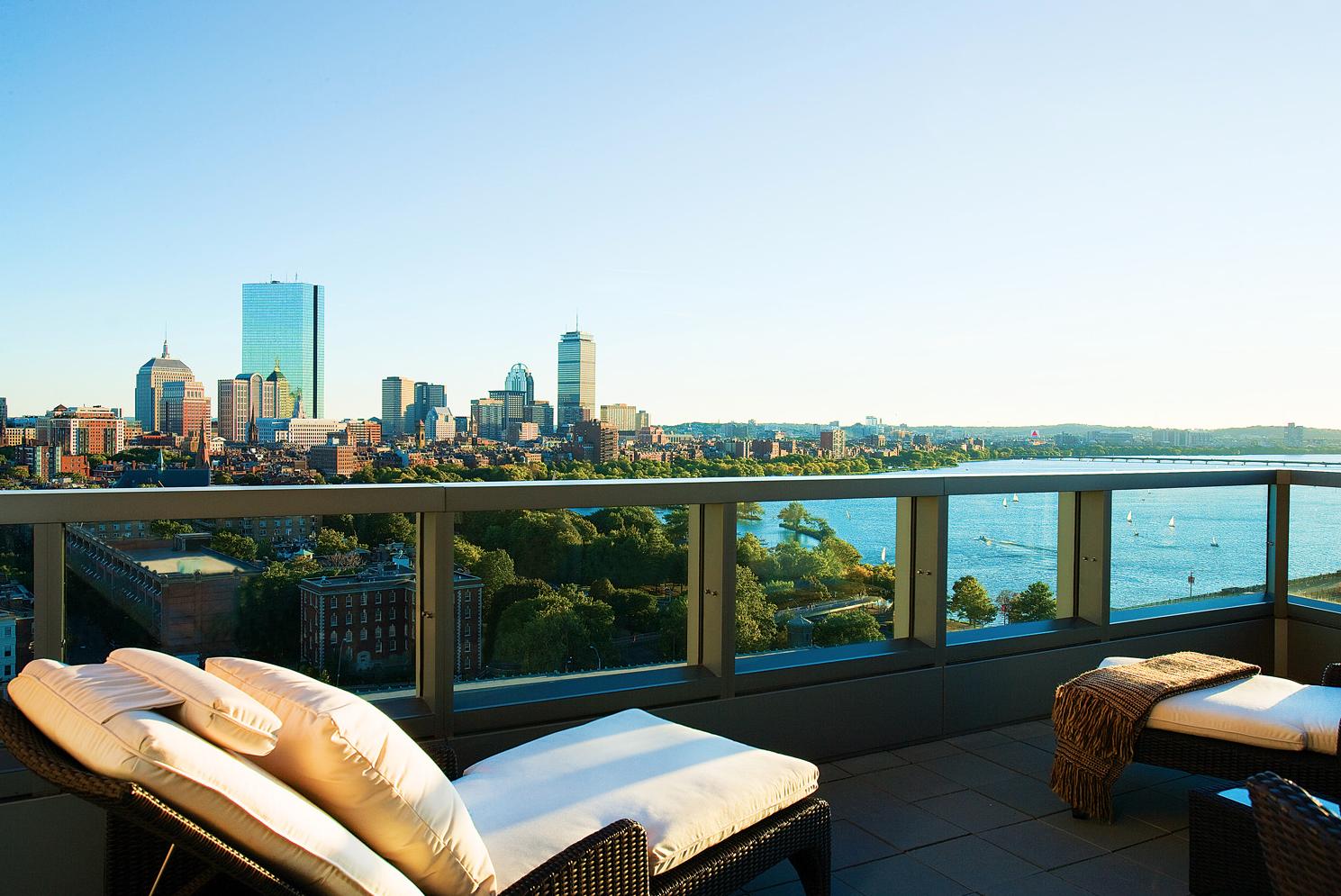 There is still a lot of history in the building and there are even tours offered by the Liberty Hotel. Much of the region’s history is still found on the inside, including the carpets that are designed in the fashion of New England crewelwork.

According to the Boston Preservation Alliance, the building, which is from the Boston Granite School of architecture was a model of architecture for prisons after it was designed and built. It was eventually declared unfit for prisoners in 1990 and was closed. That is when the Massachusetts General Hospital, which is nearby, obtained it.

The hotel company hired a firm in 2000 to turn the complex into a luxury hotel. Since that time, it has been fully restored, except for the 18-foot prison wall that hid the building from the public.

Guests can walk around on the interior catwalks: 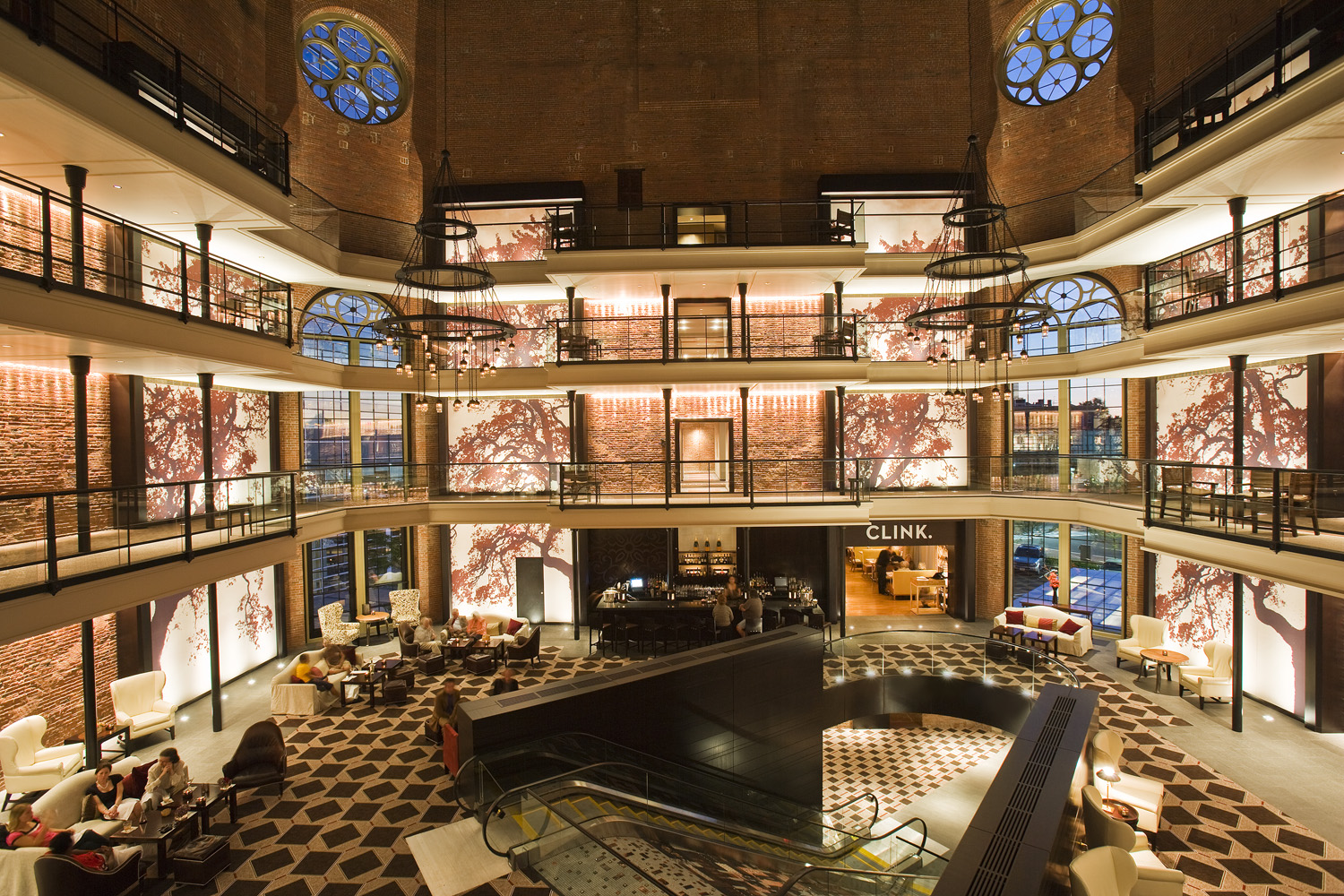 There are also options for dining and shopping.

If you are interested in staying at the hotel, you can expect to pay from $250 up to $630 per night, depending upon the time of year and any events that are taking place.

If you visit the new hotel created from an old jail, you can expect to see a rebuilt cupola based on the original design. There are four radiating wings, four circular wood windows, arched windows, and the building is three stories tall. On the inside, you will find American colonial fabrics.

The building is beautiful! 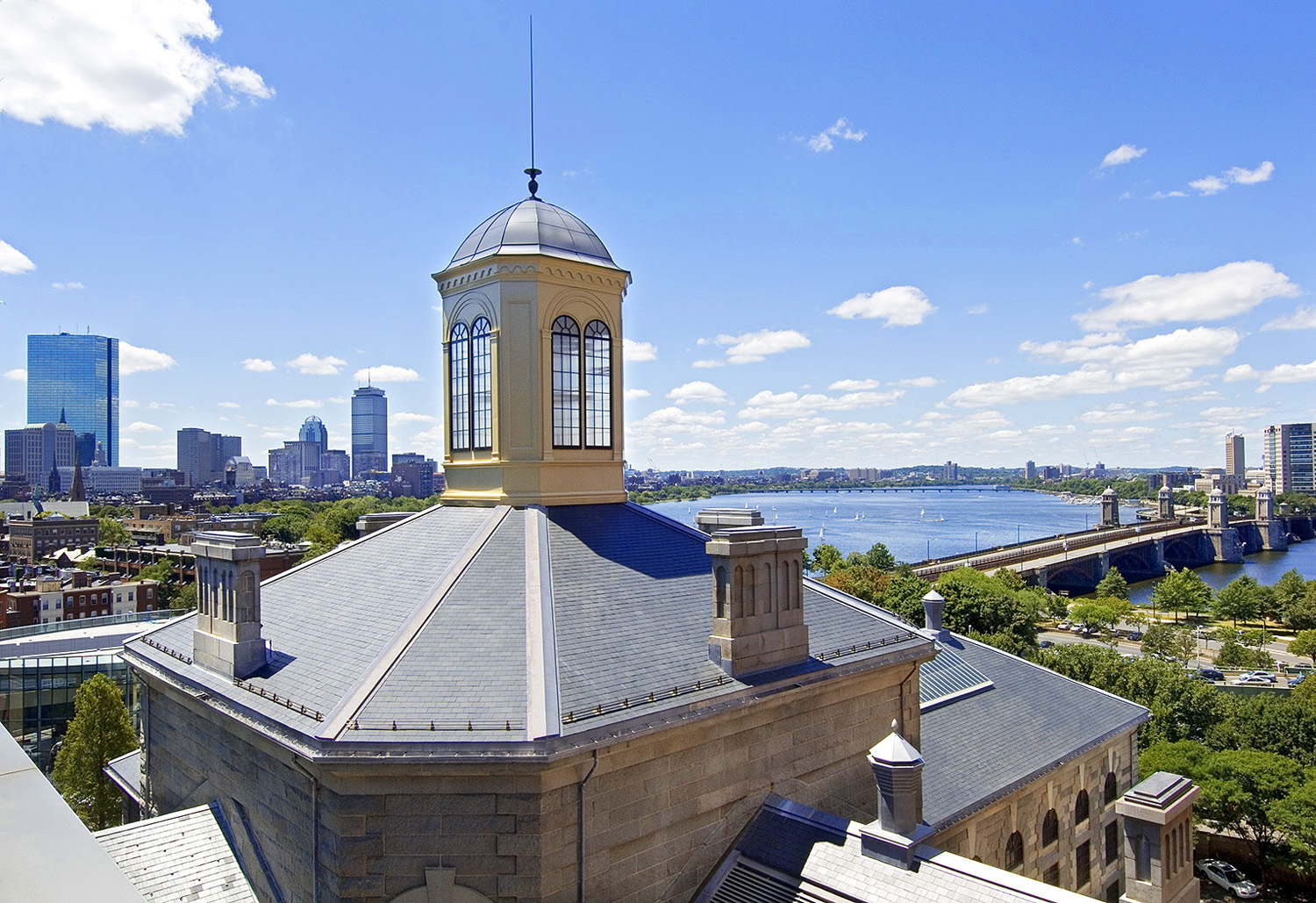 The granite exterior creates even more beauty with the cuneiform-shaped building. The central atrium is the core of the hotel, which looks quite impressive at 90 feet tall.

The prison yard is now a private courtyard. You can hold events in the yard, including weddings, such as you see below:

A magical outdoor ceremony in The Yard, our private courtyard, for #weddingwednesday ✨📷: @fergiemphoto

The Ebersole Suite is one of the luxury suite you will find at the Liberty Hotel. It has a 270° panoramic view of the Boston skyline, from the state house to Charleston. 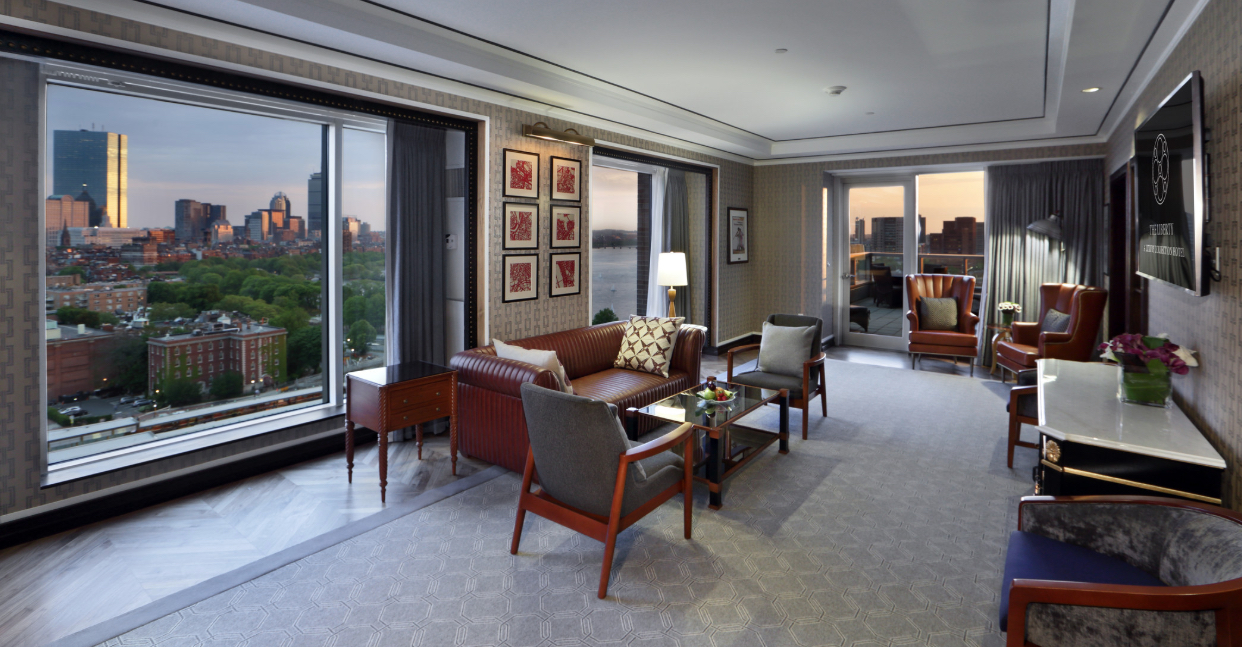 In the Ebersole Suite, you will find an entry foyer, a bedroom with a king-size bed, a master bath and dressing room, a living room, a dining room, a butler pantry, a library, half bath, and an outdoor balcony. The suite itself is 2200 ft.² and the windows go from the floor to the ceiling.

You might find the Charles River suite more to your liking. It is a one-bedroom with a king bed, one and a half bathrooms and a separate dining room or living area. You will have panoramic views of the Boston skyline, including the Charles River and Beacon Hill.

The hotel was not only a place to stay, but there are also plenty of other things to do as well. This includes bike and kayak rentals, weekend yoga classes, jogging paths, and a running concierge. That isn’t even to mention the shoeshine service.

You will also enjoy some delicious apples that are offered for free in the lobby. 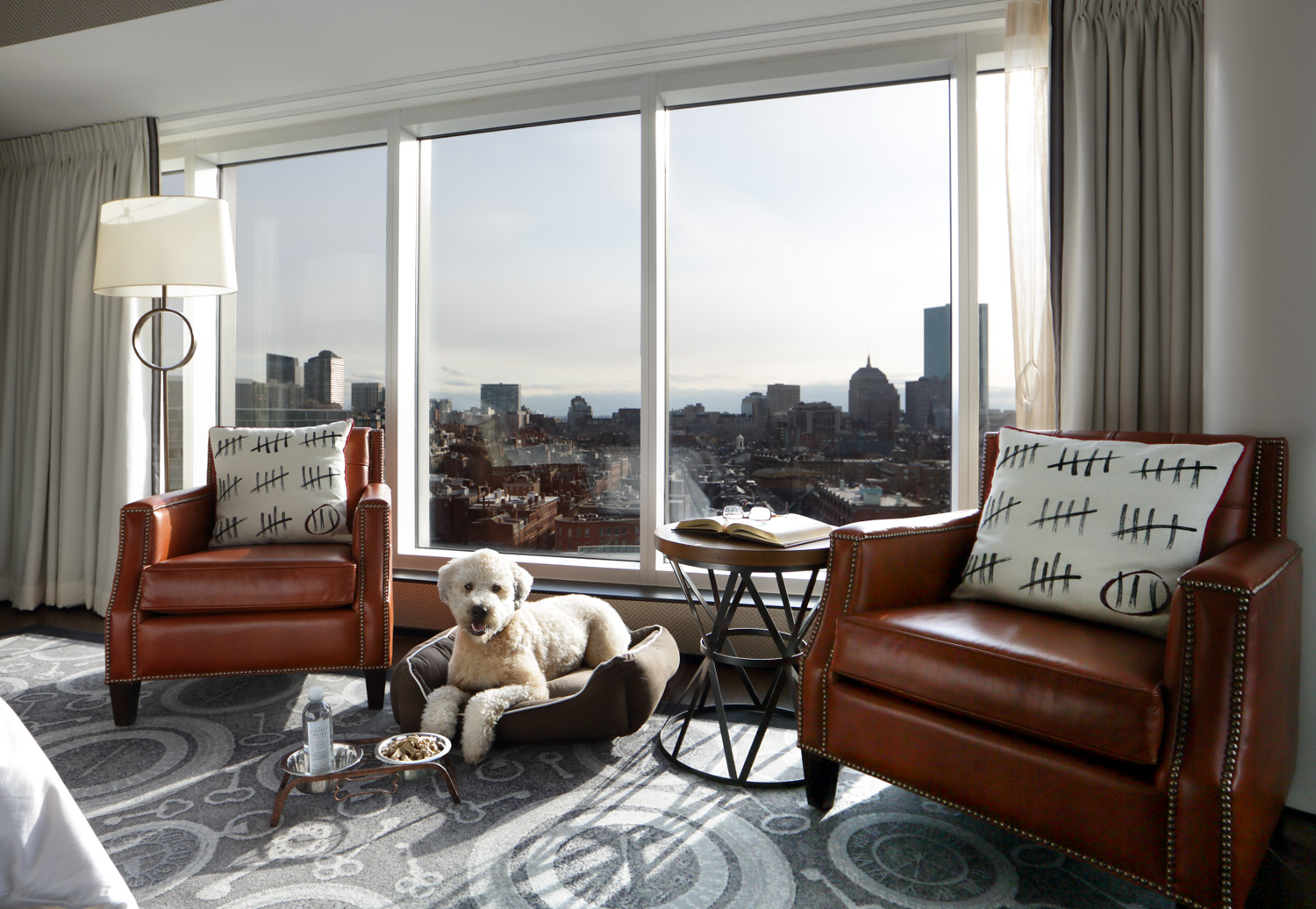 The best part of the hotel is that you can take your dog along with you!