The iconic piece of fashion and national history is one most of us know well, or as well as anyone can know a suit largely depicted in black-and-white on television and in print from over 50 years ago. Some have described it as watermelon or strawberry pink, and whatever you call it, President Kennedy had thought she looked particularly good in it and had approved of the First Lady wearing the suit in Dallas. 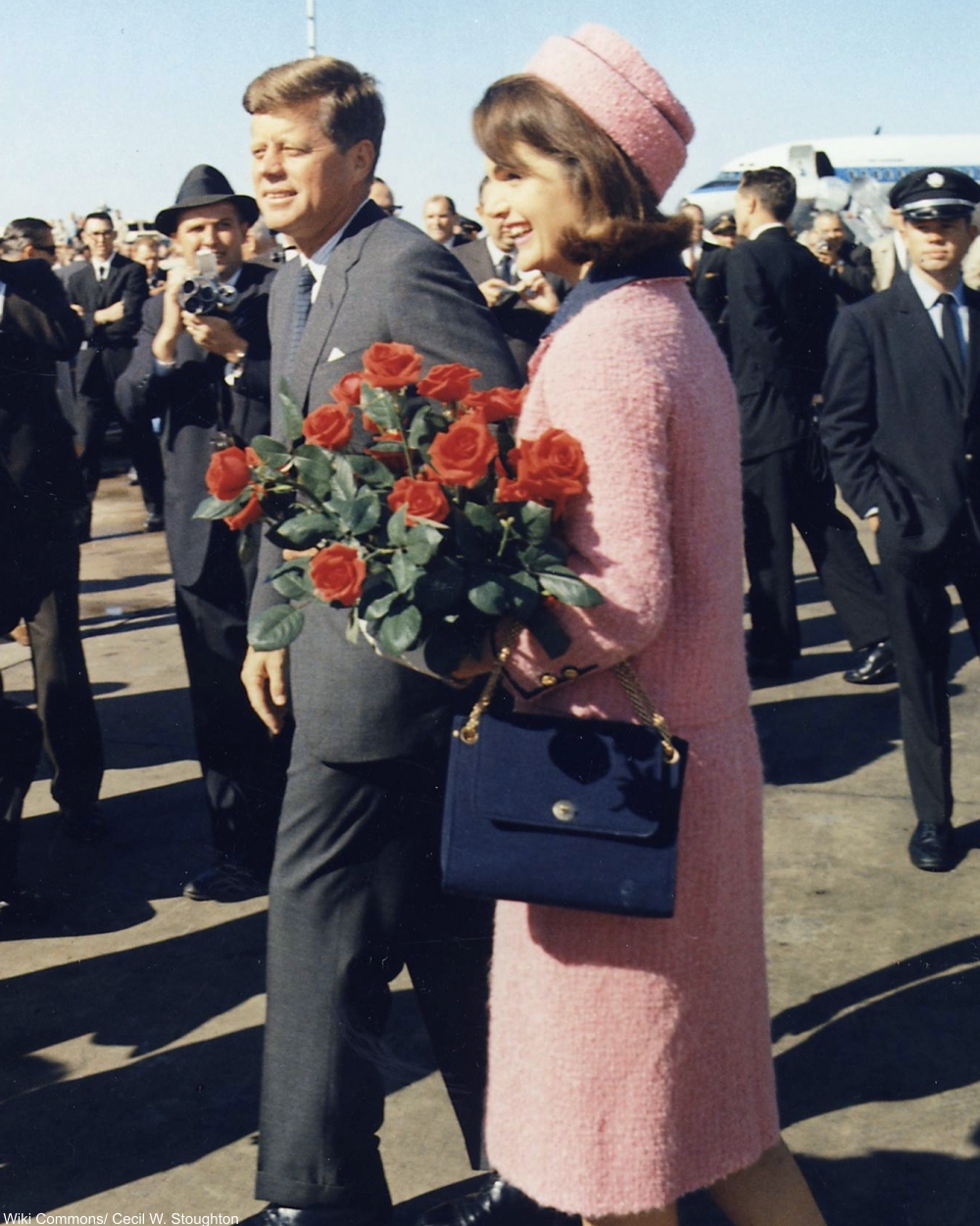 The pink bouclé suit is lined with navy blue and accented with gold buttons and it looks like Chanel, but it’s not quite. Or rather it is and it isn’t Chanel. Jackie Kennedy had come under criticism during her husband’s campaign for wearing too many expensive European clothes, and rather than change her tastes, she simply changed who made her clothes.

According to the Coco Chanel biographer, Justine Picardie, Chanel supplied all the materials and designs for the suit, with a cost equal to a suit purchased directly from Chanel, except this way they could say it was U.S.-made by the New York manfacturer Chez Ninon, though some believe is was actually a regular old fake. Either way, the suit was certainly a copy of one found in the Chanel 1961 Fall/ Winter collection. 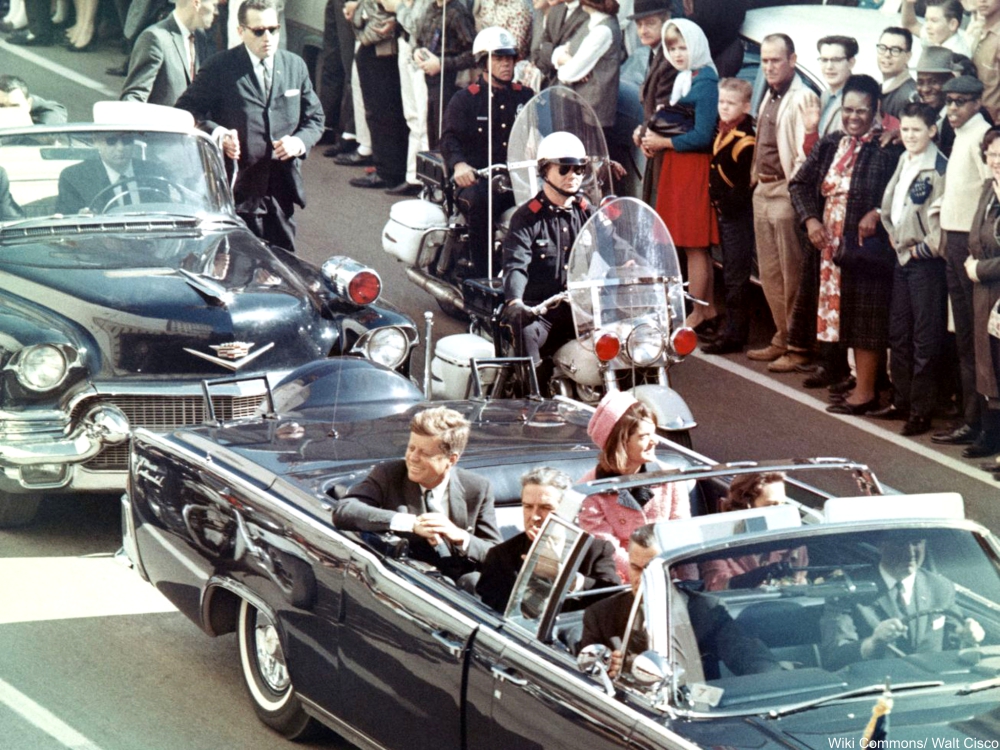 The First Lady accessorized this now-infamous suit with navy blue accessories and the matching pink pillbox hat the day she and President Kennedy rode in the 1961 Lincoln Continental Convertible of the presidential motorcade through the streets of downtown Dallas on November 22, 1963.

When the President was shot from sniper bullets around 12:30 pm, she was beside him in her pink suit and she would remain in that same suit long after it had become stained with his blood. Anyone who was alive at the time will tell you was a shock to not just to the nation, but to the whole world. No one was more affected than Jacqueline Kennedy, for she witnessed the horror up close in such a way that forever changed her.

Jacqueline Kennedy wore the suit to ride with her husband to Parkland Memorial Hospital and with his body back to the White House aboard Air Force One. She wore it at the swearing-in of vice president Lyndon Johnson as President aboard Air Force One on the Love Field airport in Dallas. The First Lady famously remarked after being asked if she wanted to change her clothing before the swearing-in that she wanted them to see what they had done to her husband.

In the official White House pictures of Lyndon B. Johnson’s swearing-in taken by Cecil W. Stoughton, the blood stains (which were most prominent on the First Lady’s skirt) are largely unseen due to how the photos were framed. 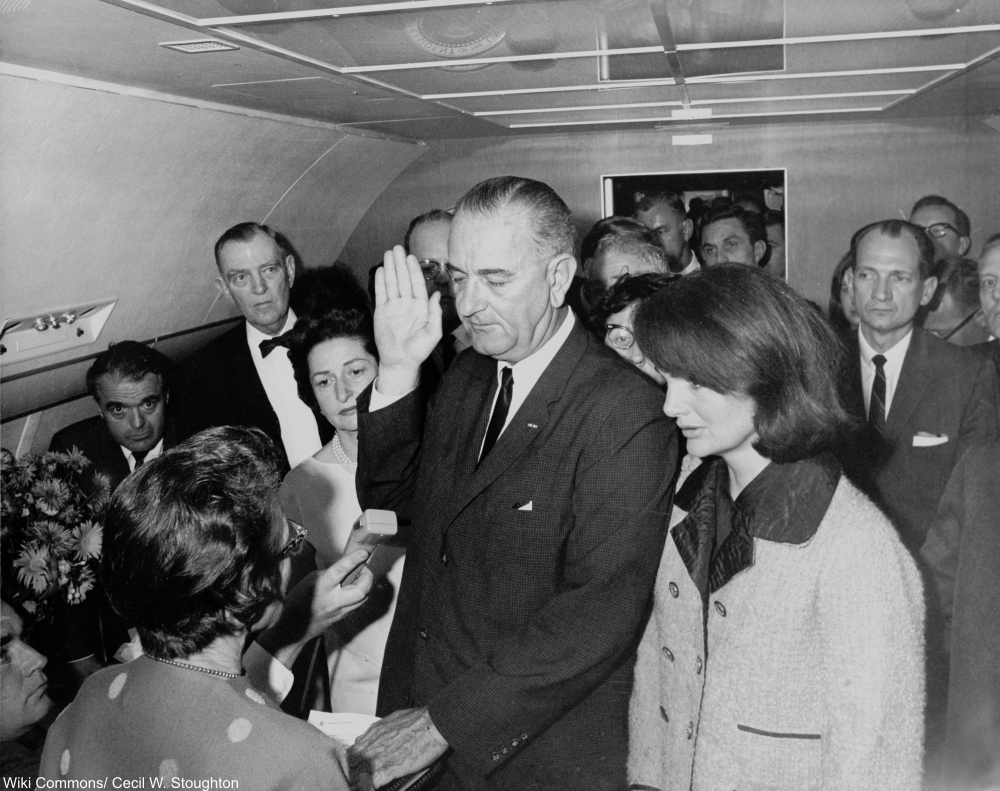 After the assassination, the now-iconic suit was bagged up without being cleaned and eventually sent (along with her handbag) to the National Archives with a note from her mother which read simply “Jackie’s suit and bag – worn November 23, 1963.”

While the suit is still held by the National Archives, it has never been on display. It reportedly looks as good as new, save for President Kennedy’s blood stains all over it. Along with Jackie’s clothes and accessories from the day of the assassination was a provision that the suit not be displayed until 2103. We have to wonder what will have become of the pink colored wool and the blood stains when that day finally comes.

If you enjoyed this click “Next Page” for some intriguing facts about JFK and Jackie!