In centuries past ivory was considered one of the most precious and desirable materials. Everyday objects were carved from ivory to show just how wealthy a person was, but of course many very special items were also carved in ivory. Some of these objects today seem like curious exhibitions from a sideshow – so alien are they to us today. One such category of ivory objects are tiny anatomical models created from the 1600s onward. Have a closer look with us at these fascinating “dolls” from another era. 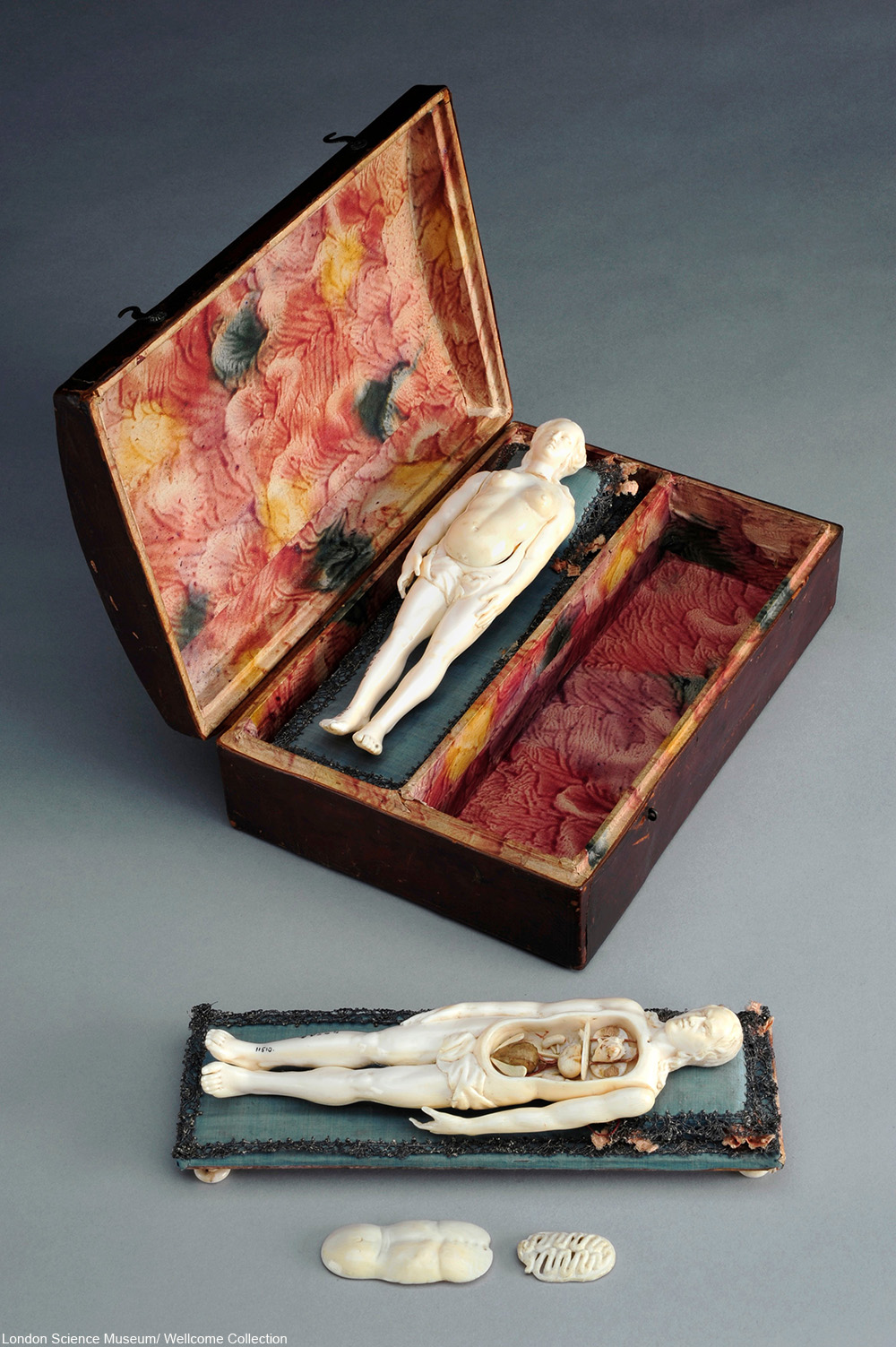 The European obsession with ivory came with an increased level of trade with India and East Asia that introduced the West with the delicately-carved netsuke figurines of Japan among other ivory items. The fascination with ivory was heightened by the cost- it was measure of one’s status in society. The carved tusks of elephants, along with ivory from seals and whales, led to a lucrative trade in these materials, something we are still grappling with today.

Back then there were no laws on endangered species and no sense that these animals shouldn’t be killed exclusively for their ivory. On the contrary, the wastefulness of the process was part of the exclusivity and expense of the whole operation. 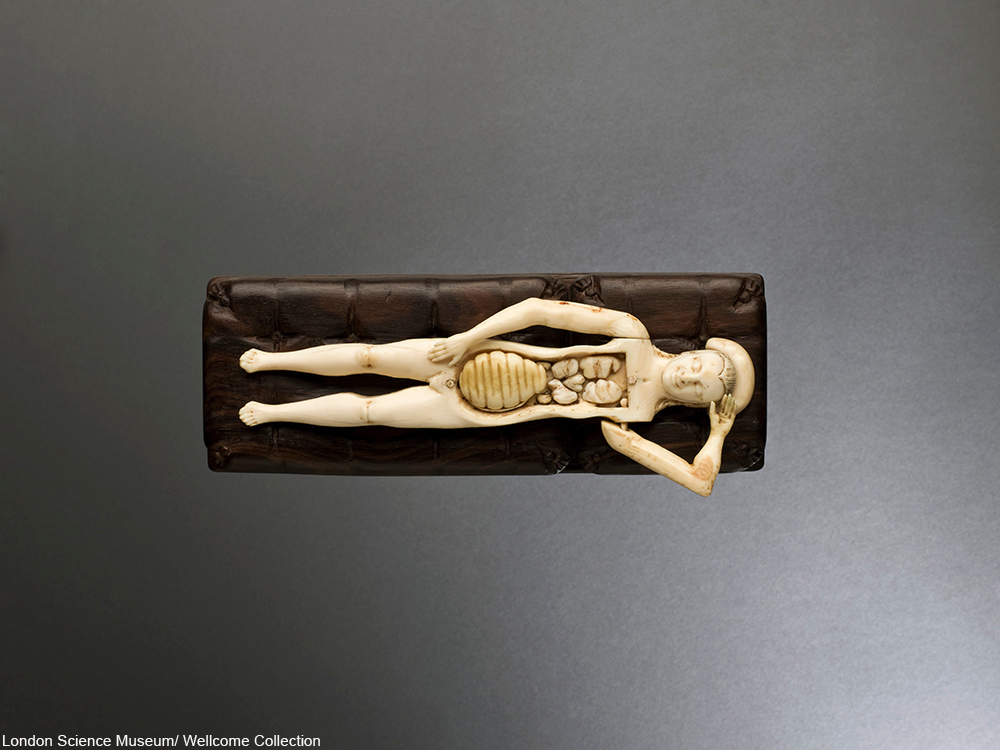 In the case of whales, a great many products could be derived from a single animal- tons of blubber for lamps and ambergris for perfume, as well as many pounds of ivory. But, whale ivory was less and is less desirable than ivory from elephants. In particular, the Dutch trade in elephant ivory was one of the most profitable and vigorous in the world during the 17th and 18th centuries.

The sleekness and durability of ivory at the time made it an ideal substance for modeling, jewelry, decorative objects, writing tools, and a host of other objects. In the pre-industrial days plastic was unknown and metal was exceptionally hard to cast. Ivory offered an attractive alternative to wooden objects, and was more durable to boot.

Along with an increasing love of ivory, Europe in the 1600s was undergoing a surge in thirst for knowledge. The medical industry was becoming more focused on cures, anatomy, and surgery. The superstitions of the medical community in antiquity were giving way to more modern scientific research. But, without an adequate supply of cadavers to dissect due to religious beliefs, medical knowledge of the body was not moving as rapidly as some would have liked. 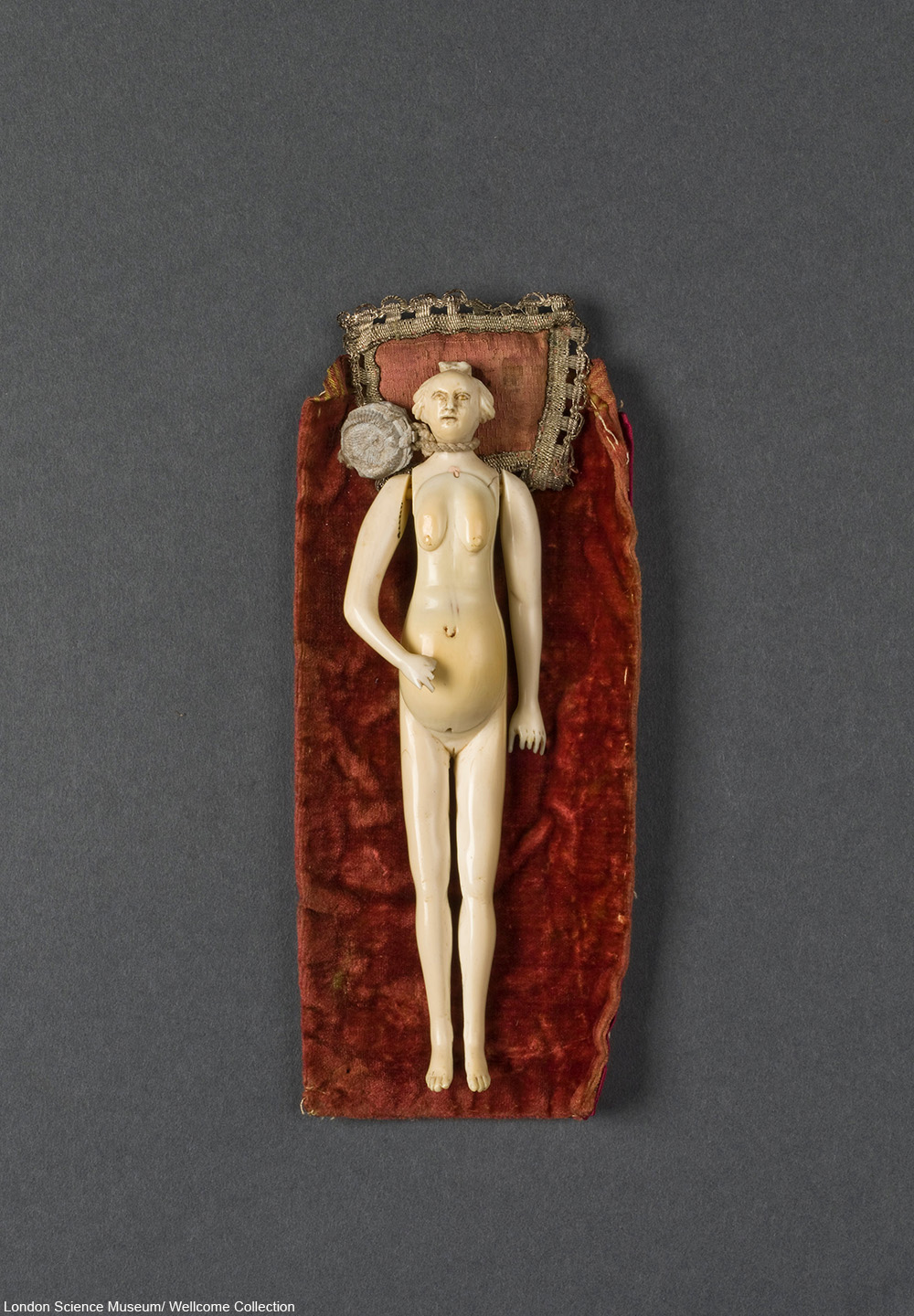 The few remaining ivory anatomical models of the era have a mysterious purpose since they most likely were not used to help the patient understand what was happening to their bodies. The concept of the medical model as something which to inform patients was an invention of the 20th century, when plastic and rubber models could be mass-produced cheaply and accurately.

In the 1600s the cheaper wax models were often used in place of more expensive modeling materials, though the wax used was often from sperm whales. With little access to cadavers and no preservation techniques, wax models and drawing were often all that doctors-in-training had to go on. However, there were very detailed ivory models being carved in Germany during the period, which is possibly were many of the ivory anatomical dolls were created as well. It’s important to note that in the U.S. ivory items that can be proven to have bene produced before

What Were The Models Used For?

The models in existence today show both men and women, but the most common female forms are all pregnant. Perhaps this was one of the most misunderstood medical conditions of the era and so was a mystery that doctors wanted to understand. Underneath the top layers of skin, abdominal wall, and intestines lies the womb with a fetus inside these models. The fetus is often attached with a silk floss umbilical cord, a tiny detail that only adds to the special nature of these carvings. 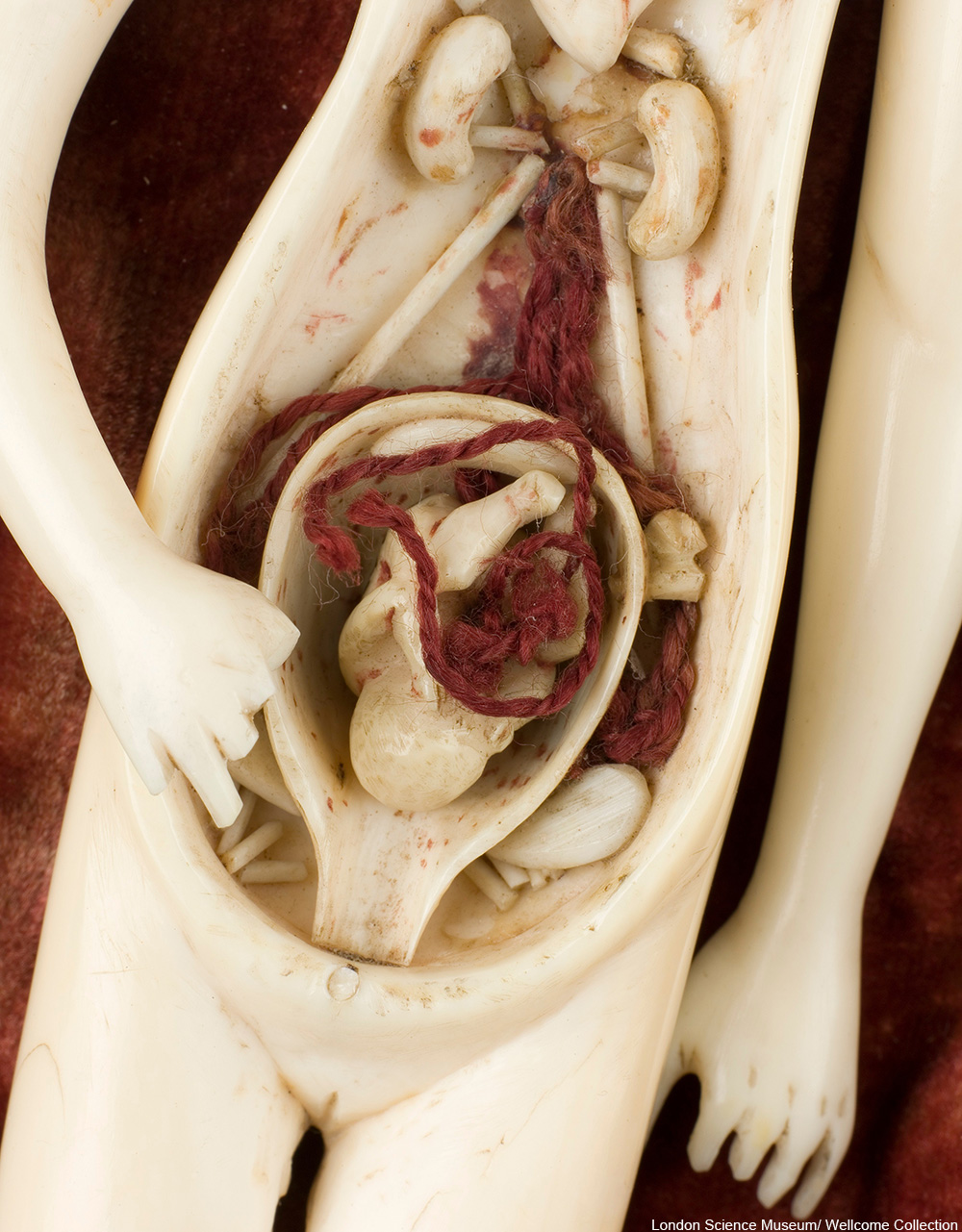 However, the organs are not very detailed generally. This has led historians and researchers to the conclusion that the models were not used for teaching students of medicine about the body. One theory is that the models were used to teach laypeople about sex and pregnancy, since they are often created in pairs. 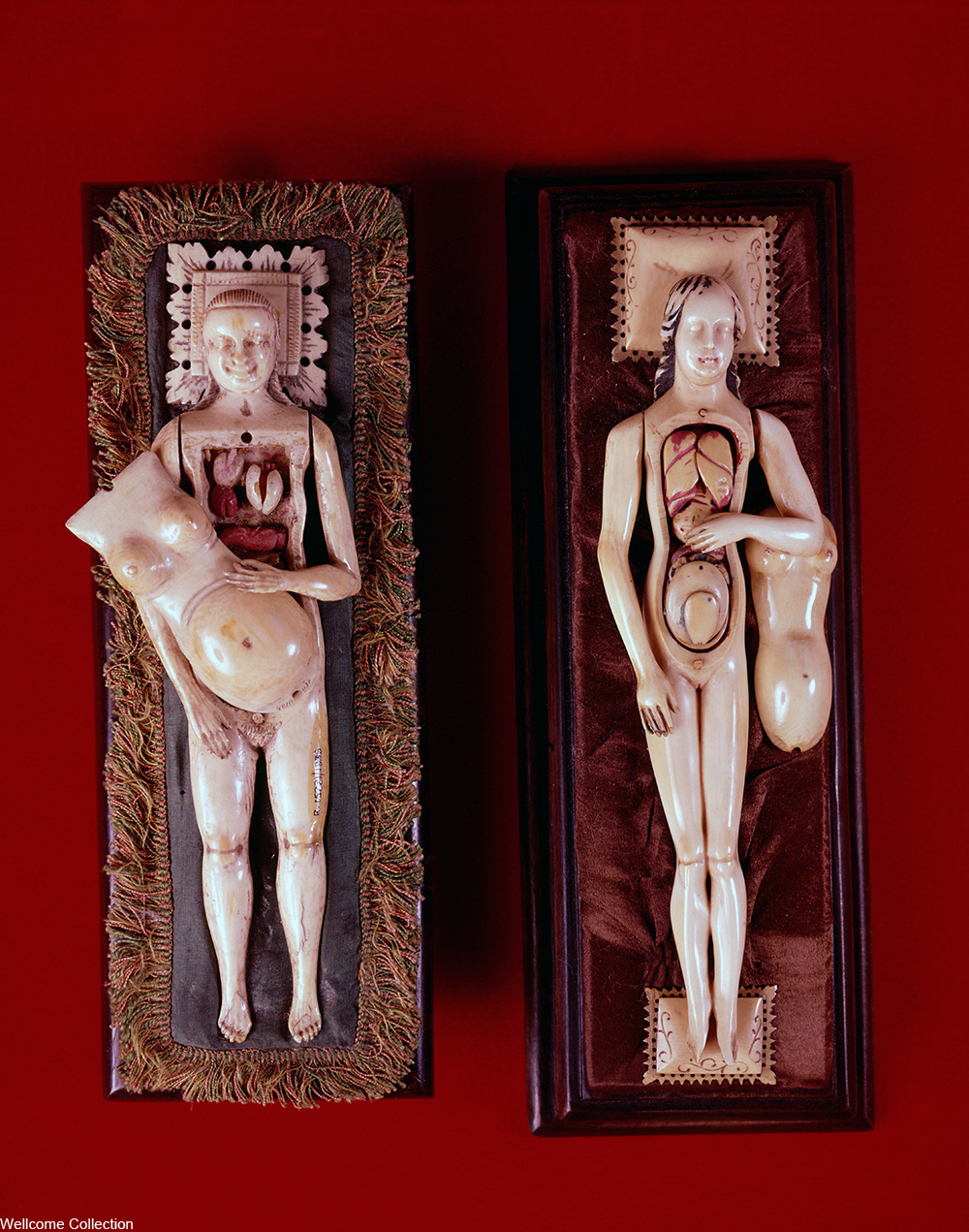 It’s interesting to note that the figures are displayed on luxurious beds of velvet, sometimes with little lace pillows, and they nearly always have smiles on their faces. These quirks would seem to support the idea that they were aids in teaching about marriage and pregnancy.

These expensive models would have been acquired by doctors as a marker of status and social standing, in addition to whatever functions they may have served otherwise. 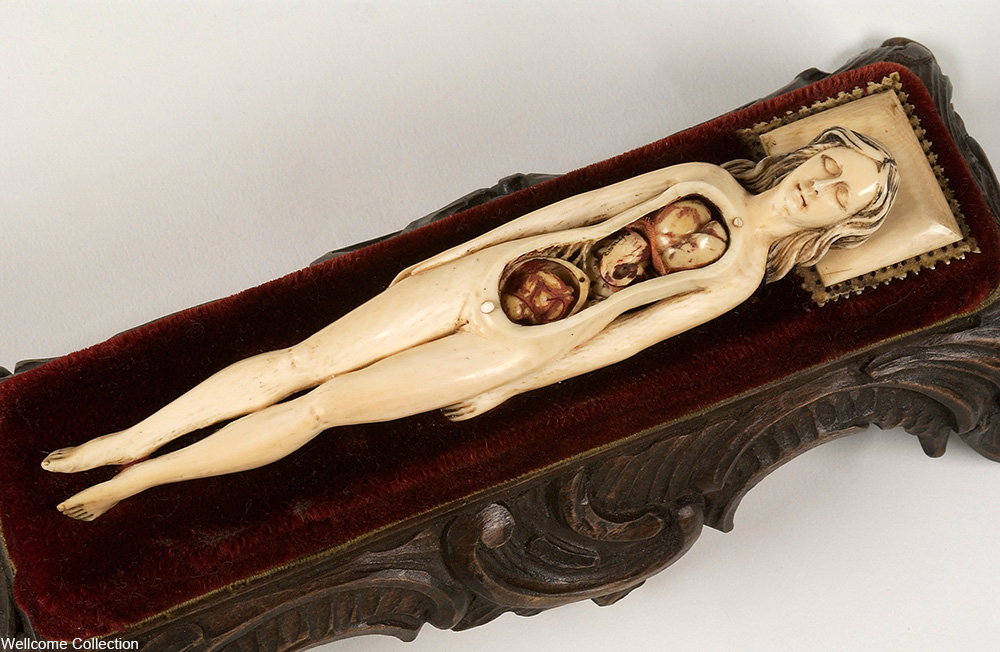 Today these little figurines seem oddly carved, quite possibly by artisans who had no real knowledge of human anatomy. It is estimated that there are around 100 of these sets in existence today. Note that these models do differ from the jade or ivory “doctor’s ladies” of Qing Dynasty China which enabled the male doctor to diagnose the symptoms of a female patient without breaking social taboos on physical contact between the sexes. 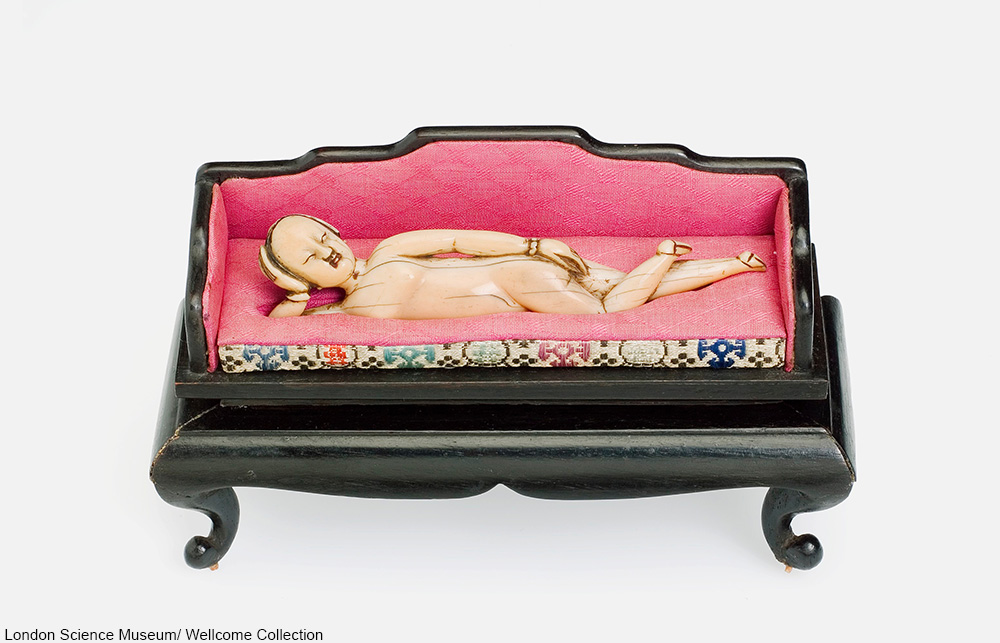 A Chinese doctor’s lady on a sumptuous couch. Via/ Wellcome Collection

It’s unlikely that you would come across a set of these models at an estate sale or antique store, but you should be aware that selling ivory is limited in many areas. The U.S. has exemptions for antique ivory provided it hasn’t been repaired with modern ivory.

Have a look at a pair of ivory medical models from the 1600s in the collection of the New York School of Medicine. The tiny scale of the models is simply incredible!

The bizarre nature of collecting taxidermy: Click “Next Page” below!