In 1957 a young artist was hired to work at Union Products in Massachusetts designing yard ornaments. Popular figures at that point had been gnomes, but the company was looking for something new. Enter Don Featherstone, a recent graduate of art school who certainly had something to offer. The company wanted animal statues specifically and Featherstone spent months researching the exotic flamingo from photographs in National Geographic. The result was a phenomenon the world has still not recovered from. 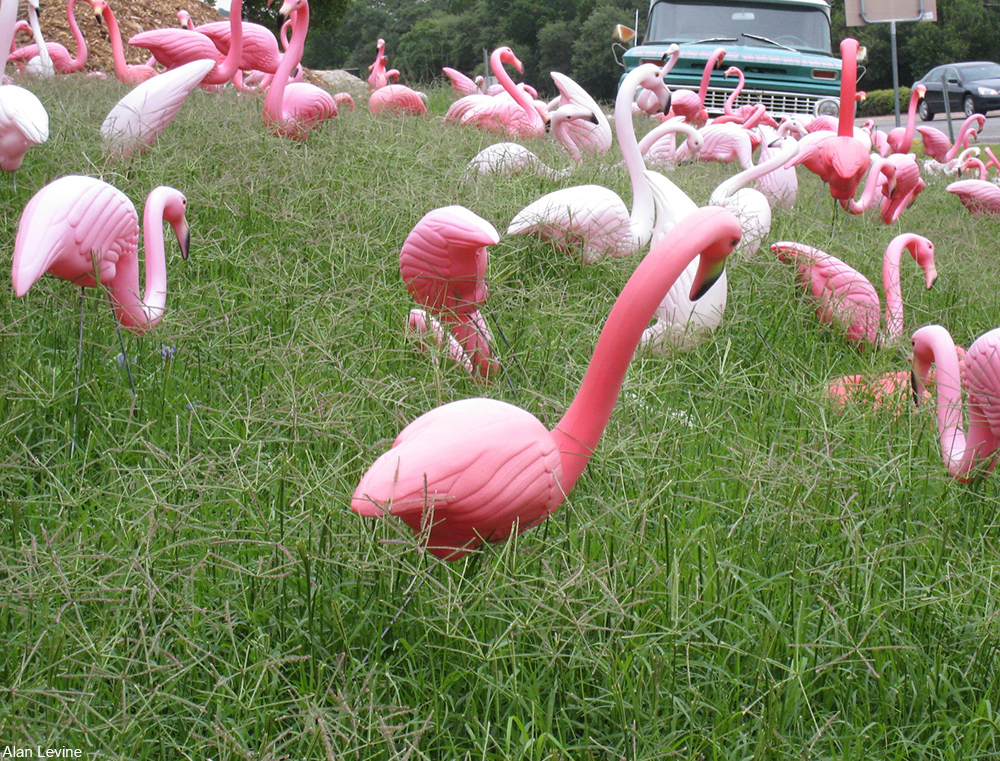 By 1958 Mamie Eisenhower’s love of pink had already crept into the public consciousness and it was quickly becoming one of the most popular colors in the country. So, it was a boom first year for the sale of these impossibly pink and delicate-looking bird ornaments.

The originals sold for $2.76 a pair and they went like hotcakes! Featherstone suspected that the trend for plastics wouldn’t continue, but he was quite wrong. He went on to design hundreds of other animals for Union, as well as make it all the way to the top of the heap as Union president after buying the company with a friend in 1996.

I can only hope that one day I am able to live my life with as much purpose as Donald Featherstone, inventor of the plastic pink lawn flamingo. pic.twitter.com/Kl99ffX3Wv

One thing about Featherstone was that for decades he played on his success with the pink flamingo, dressing in tropical prints. The really fun thing is that he and his wife, Nancy, often wore matching outfits. His Hawaiian shirt would be the exact same print as her dress. Nancy was a talented seamstress, as is evident from photos of the two together in outfits she made for them both. So it went for nearly 40 years of marriage!

I had to search for photos of the matching couple, how precious ugh pic.twitter.com/J0P1t7fGZ6

In 1991 Featherstone was awarded the Ig Nobel award for art, a spoof of the Nobel prizes that still manages to hold a fair amount of sway in professional circles.

Proud moment in my life as I have in my possession a pair of Don Featherstone original pink flamingos and two very confused cats… Grad school definitely takes you on a wild ride.

Today the most popular pink flamingo items are pool floats, but the iconic image can be seen on everything from shirts to stationary to hair barrettes. And, of course, we can’t forget the numerous imitations of Featherstone’s original lawn decor that have been produced over the years. But, you can tell an original from a fake by his signature embossed on the bottom. This feature is still present on the ones made today by Cado, the company which bought the rights to these most famous yard birds in 2010.

#tbt I photographed Don Featherstone inventor of the plastic pink flamingos many years ago. Looking at the internet i see ther were other people there with much tighter shots…i liked a wide lens in these days…i shot a short 24ex 35mm roll. I have another photograph of him signing a flamingo for me..wish i knew where that went. Ive always loved these flamingos and was real excited to photograph and meet Don. I picked this shot for my sisters birthday she likes flamingos. #flamingos #plasticflamingo #donfeatherstone #donfeatherstoneflamingos #pinkflamingo #flamingo #pinkflamingosculpture #35mm #filmphotography #colorfilm #kodakcolorfilm #vintage

Twitter has recently lit up with images of Don and Nancy as the cheerful photos certainly do put one in a good mood. People have recently been gravitating once more towards the birds and their charismatic creator.

Featherstone was born in 1936 and died in 2015 from Lewey body dementia, the second most common type of dementia after Alzheimer’s disease. His wife Nancy and his two children from a previous marriage survived him. However, he will always be remembered (even by the younger generations it seems) for his pink flamingos which have brought much joy to people over the years.