Video About The ‘Husbands Of Women Who Love Target’ Goes Viral

If you spend any amount of time walking around Target, you will notice a rather interesting phenomenon. Although women are shopping throughout the store, there are also some ‘Husbands of Target’ that are hanging on the outside of dressing rooms or keeping their wives from going down certain aisles. They are a unique breed that will sometimes accompany their wives when they enter the store to ‘pick up a few items.’

If you recognize that group or perhaps are a part of it, then you will love what these 4 dad bloggers have to say about it. They posted a new video about ‘a group of husbands collectively waiting in the Target parking lot.’

Penn Holderness of the Holderness Family, comedian Charlie Berens, Taylor Calmus of Dude Dad and Myles Montplaisir of You Betcha formed this group.

They posted a parody video associated with the boredom they were feeling. After all, Calmus said that he spent enough time in the parking lot that he started returning carts. Target gave him a job.

Once they start hanging out in the parking lot they got a poker table and started having tailgate parties.

“I know it sounds crazy, but I look forward to those throw pillows going on sale now,” Montplaisir says mid-video. “Get to see my boys.” 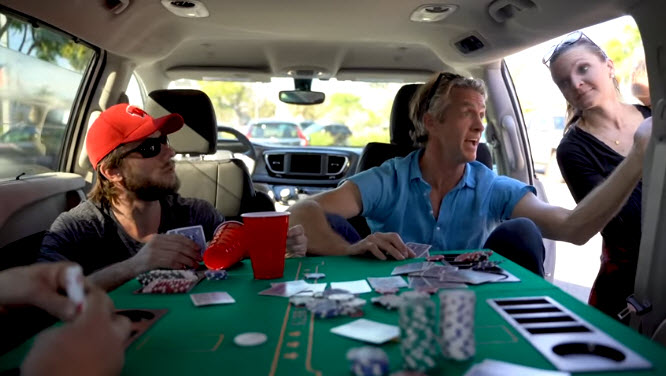 They are even hoping that groups of Target Dads will start popping up in other areas. Berens says, “There’s no reason for any husband to endure a red tag sale alone.”

One commenter on YouTube said, “I know it’s a joke but this needs to actually be a thing.”

There is even a Husbands of Target Official Group on Facebook created by the original Target Dads. They already have quite a following. Target mom-plus ones can locate each other and get together to enjoy their time in the parking lot.

“Use this group to find other guys that may be sitting just three cars away in your own neighborhood target,” the group description says. “Swap stories of ways you’ve passed the time or crazy things your wife has spent money on. We’re all in this together…”