There was a time when women never wore pants and only wore dresses. For formal occasions there were fine designs in silk, rayon, or wool. But, for everyday wear no woman would have been caught dead without her ubiquitous housedress. Today women can wear anything they want, but back then pants and shorts were only for beach vacations at best. Have a look at the evolution of the humble house dress below. 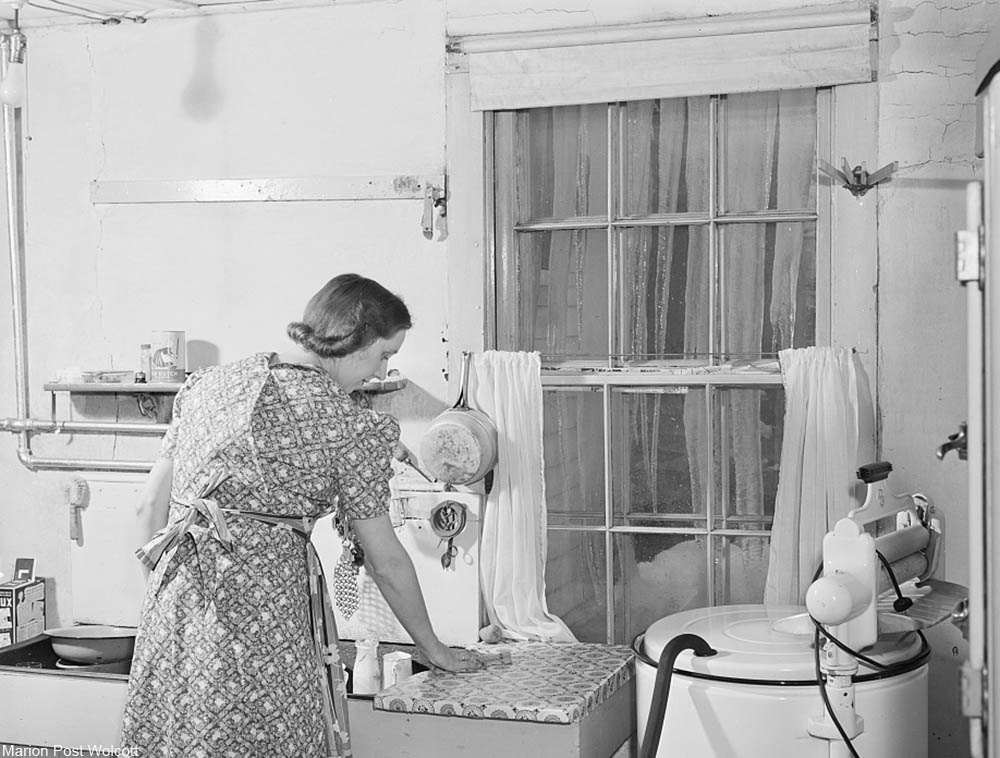 As highly functional garments, house dresses had to fulfill variety of qualifications. They were usually lightweight (in cotton- though later designs saw polyester and rayon in the mix). They often had pockets- and if it didn’t then a woman’s apron certainly did. They were easy to launder and often had a print – something which made hiding stains and repairs a cinch. In later years house dresses had a zipper for ease of use. 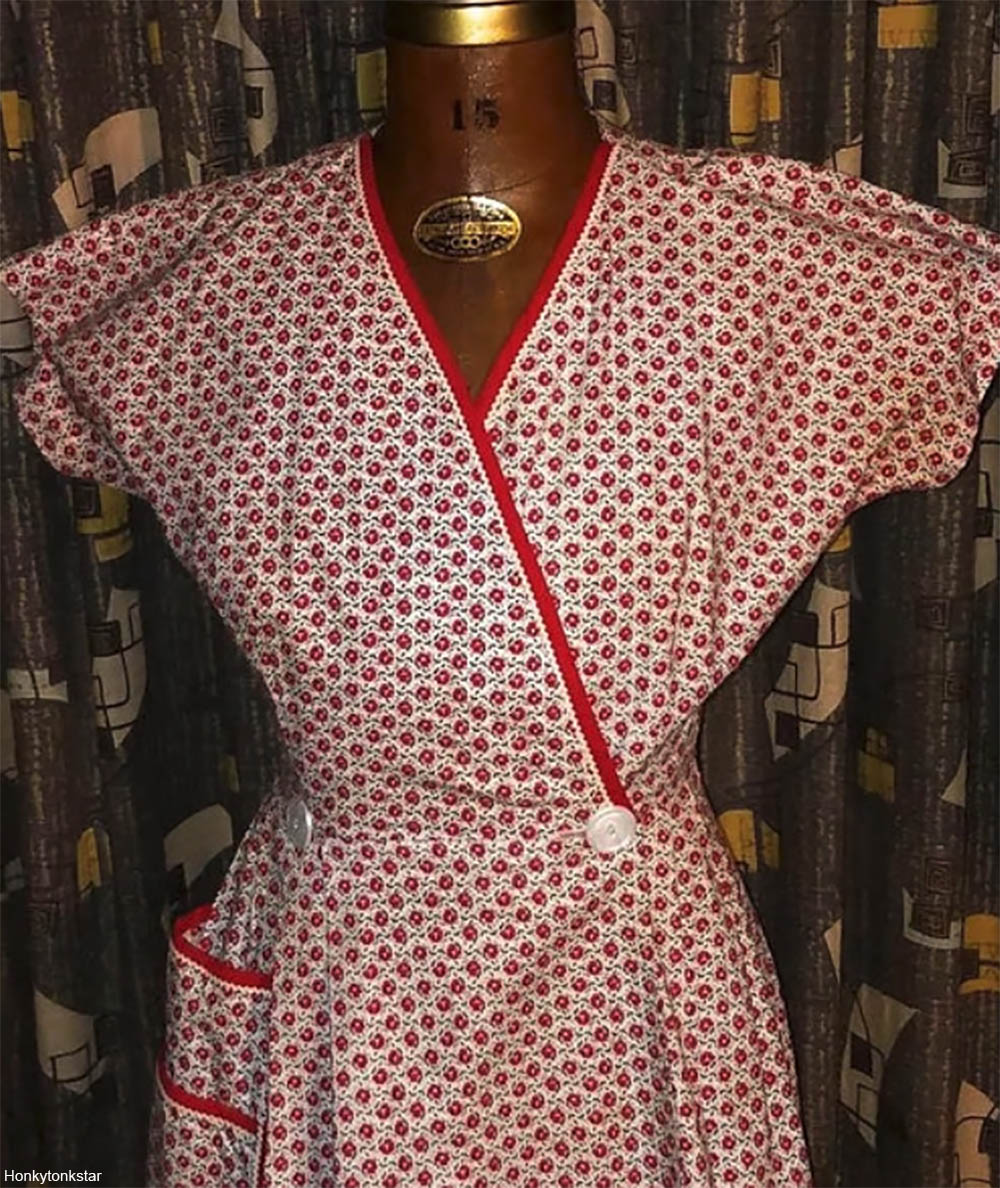 Some iconic designs came out of the tradition of house dresses, like the popular Swirl dress which had originally been marketed as a wrap apron. These and other other wrap dress of the 1940s onward were often copied at home since they were so easy to sew up and looked great with a frilly apron over top. 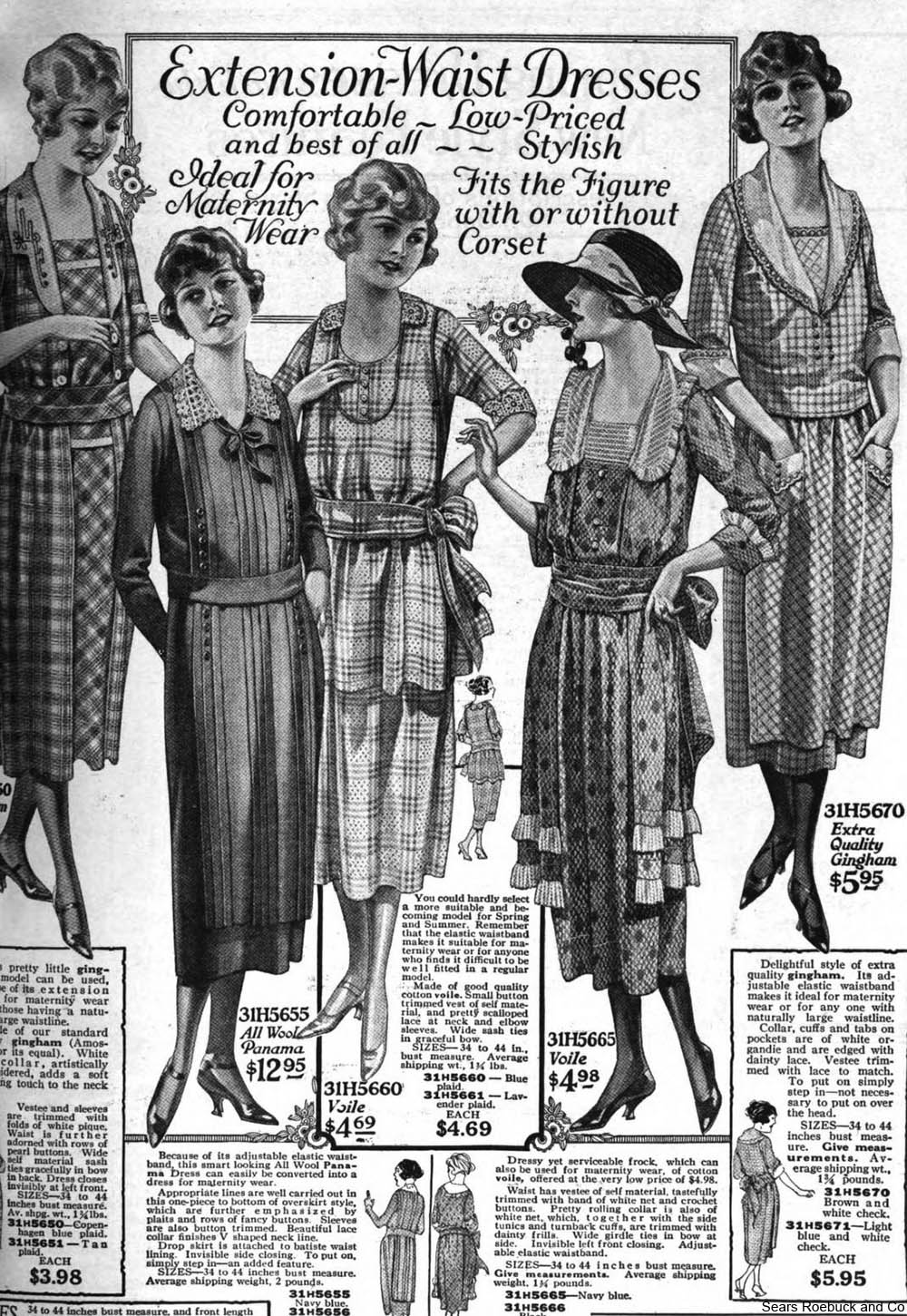 Many of the old time house dresses featured a loose waistline, something which gained widespread popularity following World War I. Once the corset had fallen out of fashion in the 1920s, the Great Depression sealed the deal on these looser and less-structured dresses. They had the added benefit of being useable throughout a pregnancy, provided they were cut generously to start. Staying at home to do the cooking, cleaning, and childrearing was the life for most women so it makes sense that maternity wear was sort of built into the features of this style of dress. 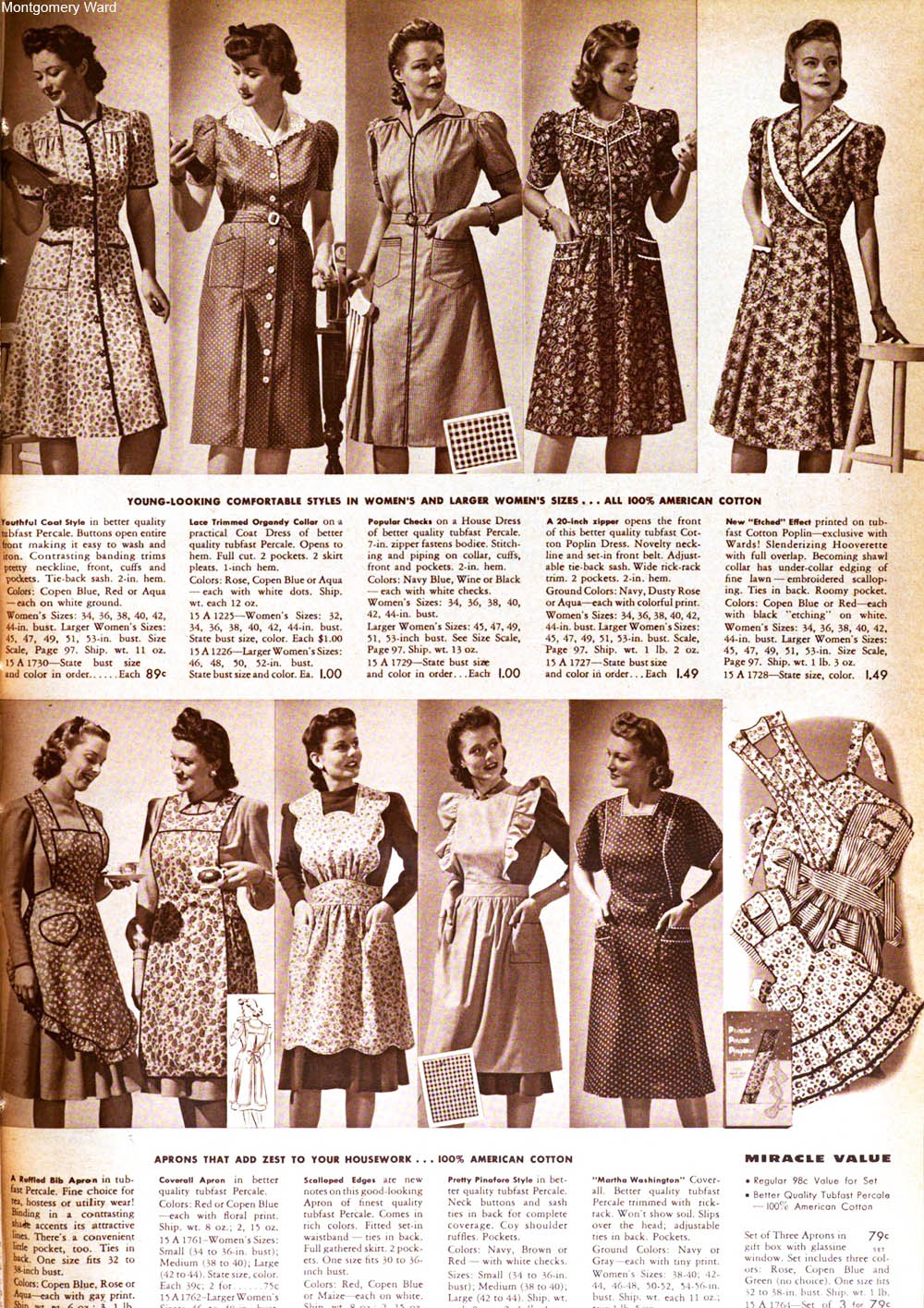 Many women from the 1930s onward chose to wear their house dresses to do the daily errands, often with gloves and a hat. But, for formal or special occasions, if she had other (more expensive) dresses she would have worn those instead. 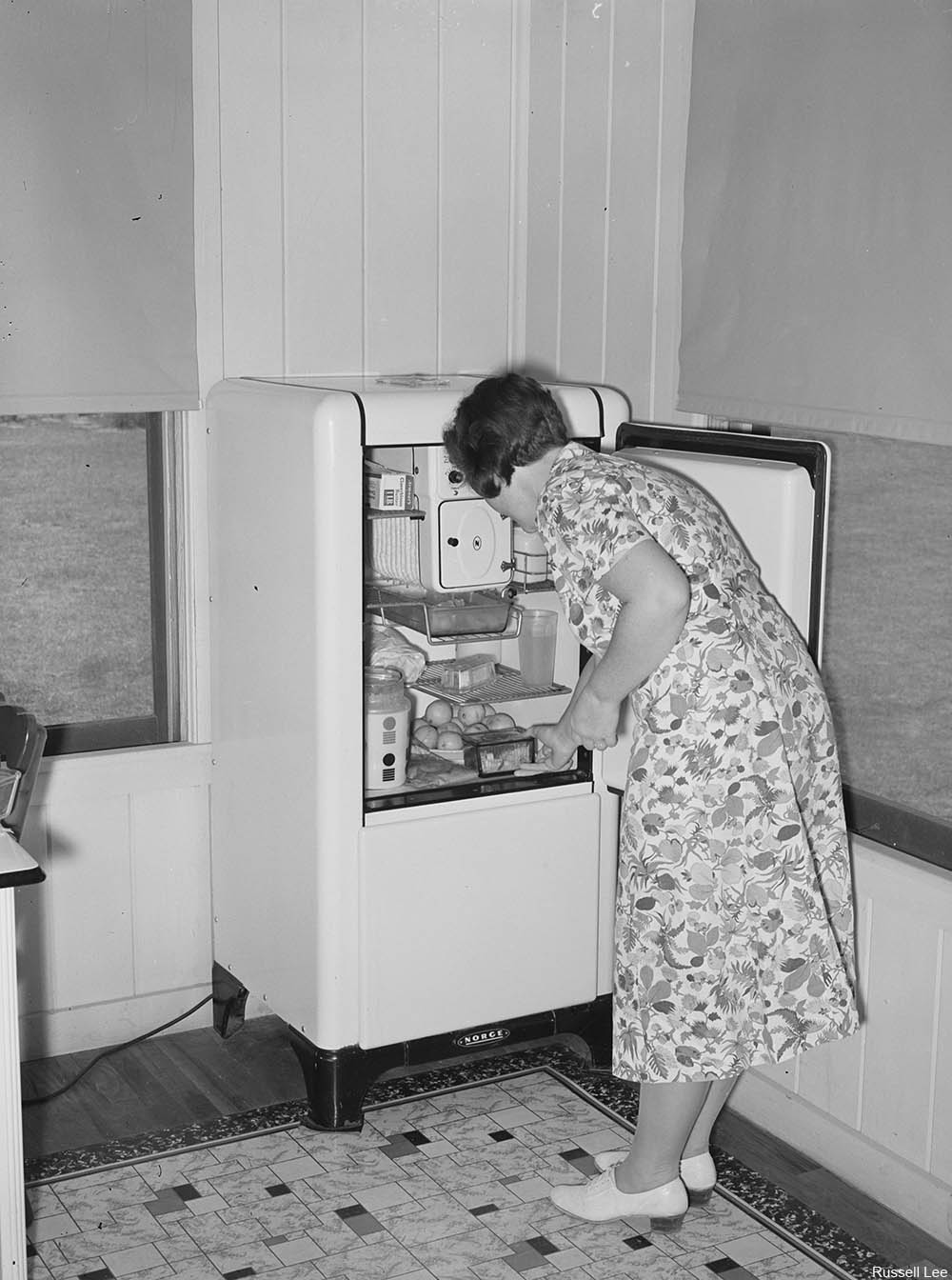 The house dress style came from the modest, yet liberating “Mother Hubbard dress” as first envisioned after artist, Kate Greenaway, illustrated her nursery rhyme books showing women and girls in smock dresses in the 1880s. These dresses let women be fully covered, yet had no structure and did not require a corset, bustle, or complicated underskirts like other fashions of the 19th century. It was the Victorian fight between fashion and purpose embodied in garment form. 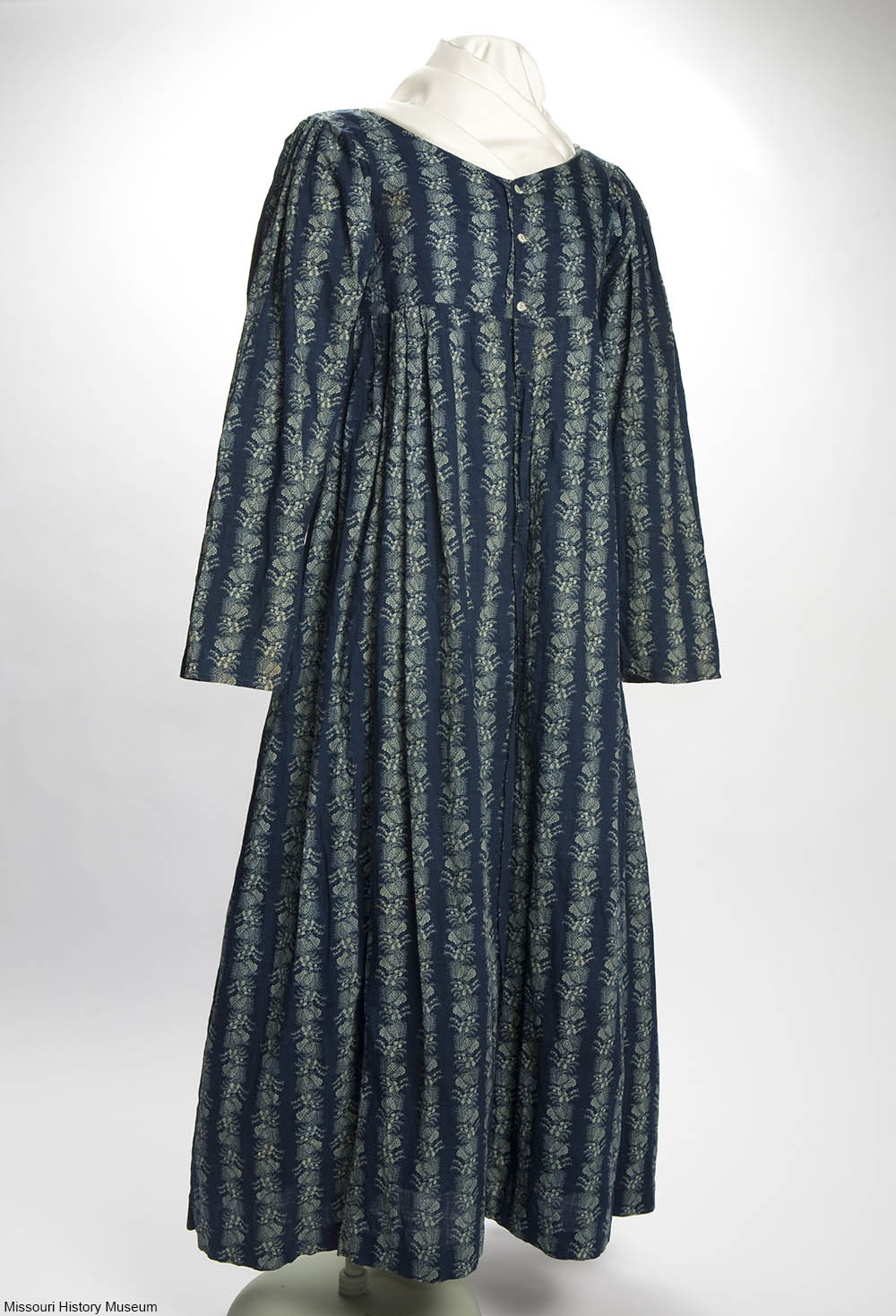 A Mother Hubbard dress from the 1820s. Via/ Wiki Commons

The style didn’t fully catch on for women’s clothing, but was the predecessor of the house dresses which would become a must-have for any housewife in the interwar period. The Mother Hubbard dress was not considered fit to wear in public during the 19th century. Later generations of women in their house dresses enjoyed a modest amount of fashion thanks to machine printing of fabrics and the advance of the sewing machine. However, the conflict between clothing which was useful and those which were fashionable still plagued the housewife well into the atomic era. 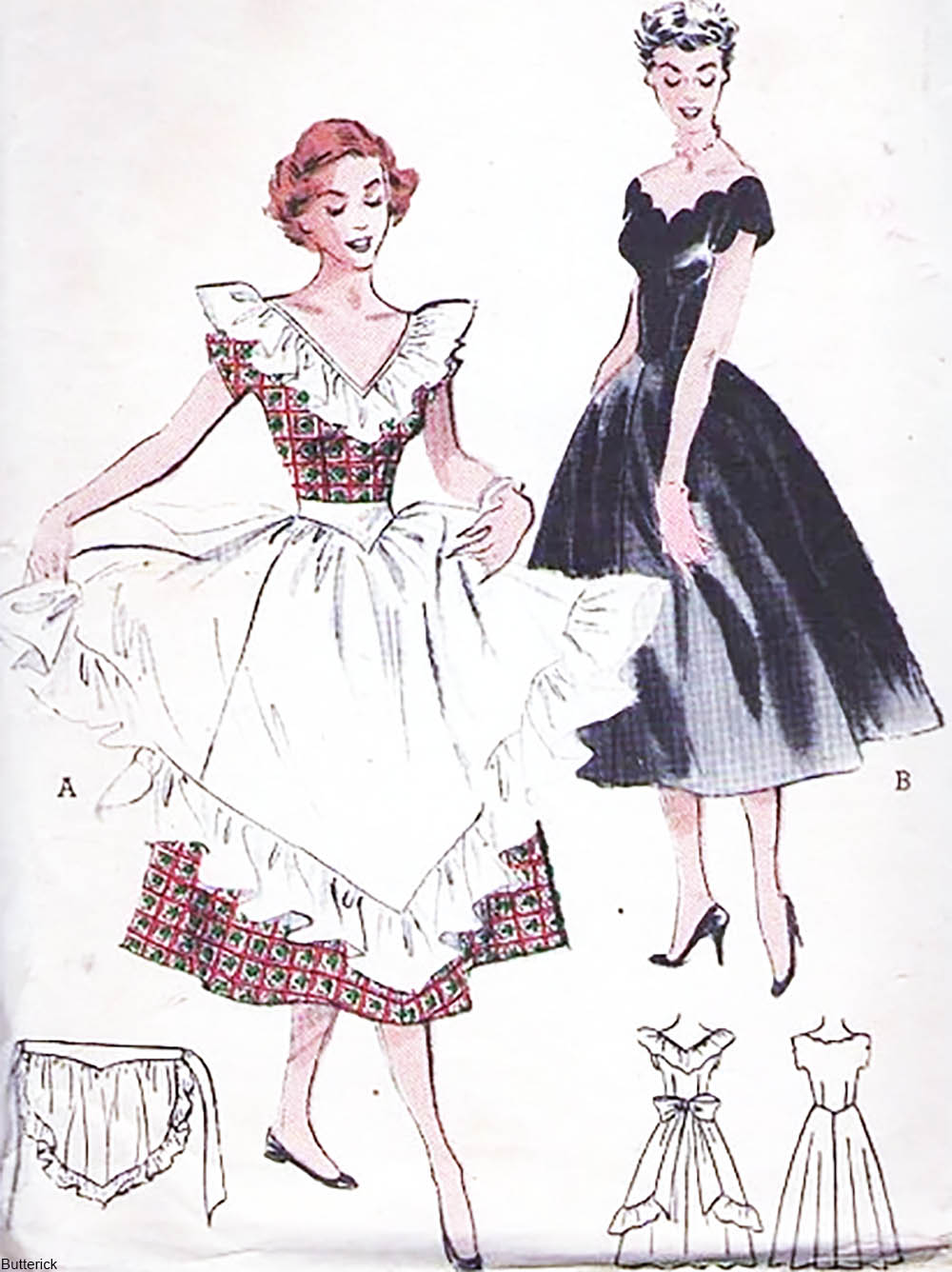 In 1942 designer Claire McCardell came out with the Popover dress which became one of the industry standards in house dresses that women flocked to. From then on some clothing companies became known for their house dress designs.

It was only with the complete change in fashion and job status of women in the 1970s and 1980s that the house dress became outmoded in favor of jeans or knits. However, we remember these bastions of home life as something every woman would have owned once upon a time.