Alex and Jess Monney recently stumbled upon a hidden message while renovating the bathroom in their house, and it’s pretty hysterical. When their contractor was gutting the old bathroom, they all came across a note hidden inside the walls from the previous owners.

“If you’re reading this, that means you’re remodeling the bathroom again. What’s wrong with the way we did it?!?!?” the note reads. Alex and Jess said that they thought it was absolutely hilarious and it gave them a good laugh throughout the day! 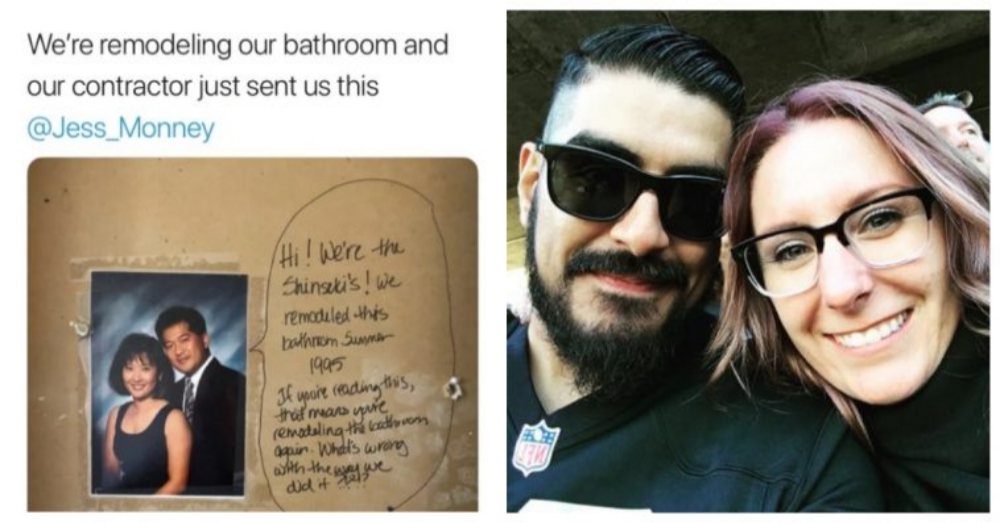 Jess and Alex have confirmed that they will, too, leave a note on their wall for the next home owners after they leave. After the hilarious story blew up, many people on social media tried to track down the Shinseki’s from 1995.

Alex put out a public statement to the Shinseki’s, saying, “Your bathroom, and home, is lovely. It has given us a lot of beautiful memories and we can’t wait to raise our little baby girl here. Sorry we’re changing the bathroom, but the shower is too small for me to fit in (I’m 6′ and my wife is 5′). Thank you for the amazing surprise!”

The original uploaded picture to Alex’s Twitter account totaled up to over 80,000 likes in 24 hours. People became obsessed with the Shinseki’s and their idea to leave their mark and funny jokes on their house before leaving it behind. They might have started a trend.

Be sure to SHARE this hilarious house renovation story with your friends!