For most of us, when the name Heywood-Wakefield is mentioned we might get a passing glimpse in the mind’s eye of blonde Mid-century Modern furniture, if the name is familiar at all. But, as it turns out, the Heywood brothers were making chairs, tables, and dressers, and beds since 1826! What might be even more surprising is that the company is making some modern gems today! Keep reading to find out about collecting and identifying this iconic furniture. 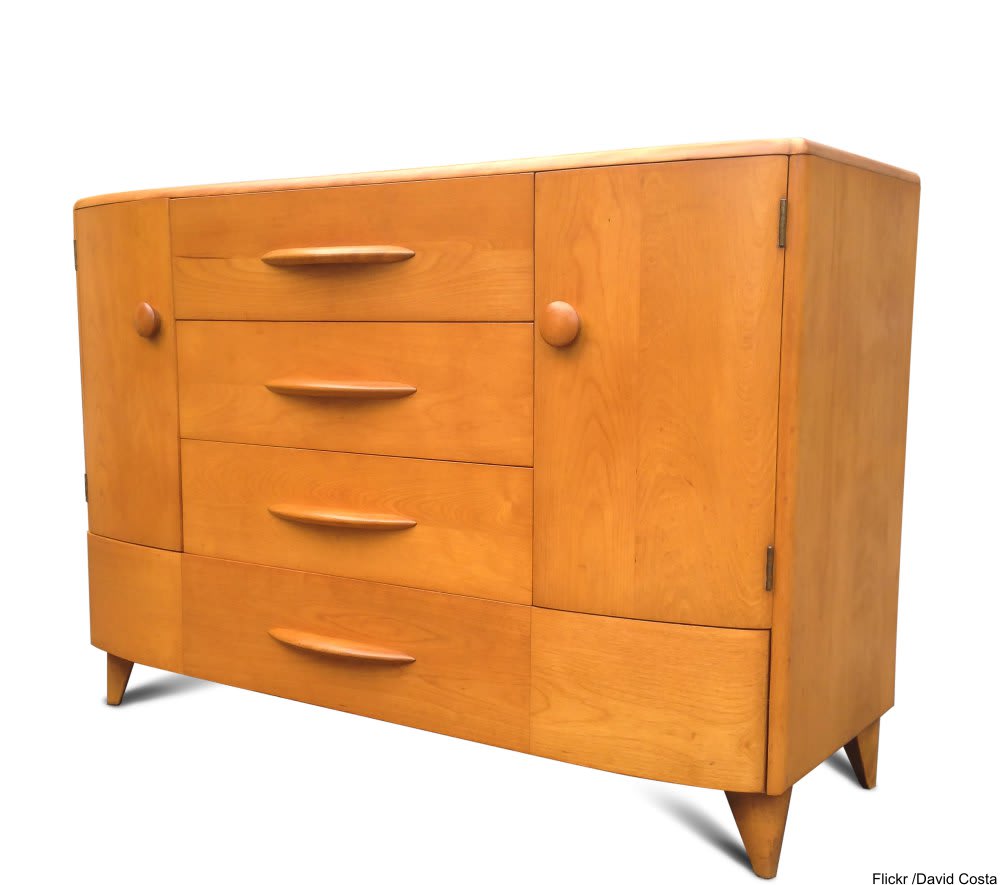 The Heywood-Wakefield Company was started in 1826 by the 5 brothers Heywood: Walter, Levi, Seth, Benjamin, and William. In 1897 the company combined with the Wakefield Rattan Company to form a new entity. Pieces from just after the merger bore the signature look of the 19th century and all its ornamentation, including a cursive Heywood-Wakefield paper label. But, with the slump of the Great Depression, the company featured bold, new designs which threw off the yoke of Victorian decoration in favor of something truly modern. 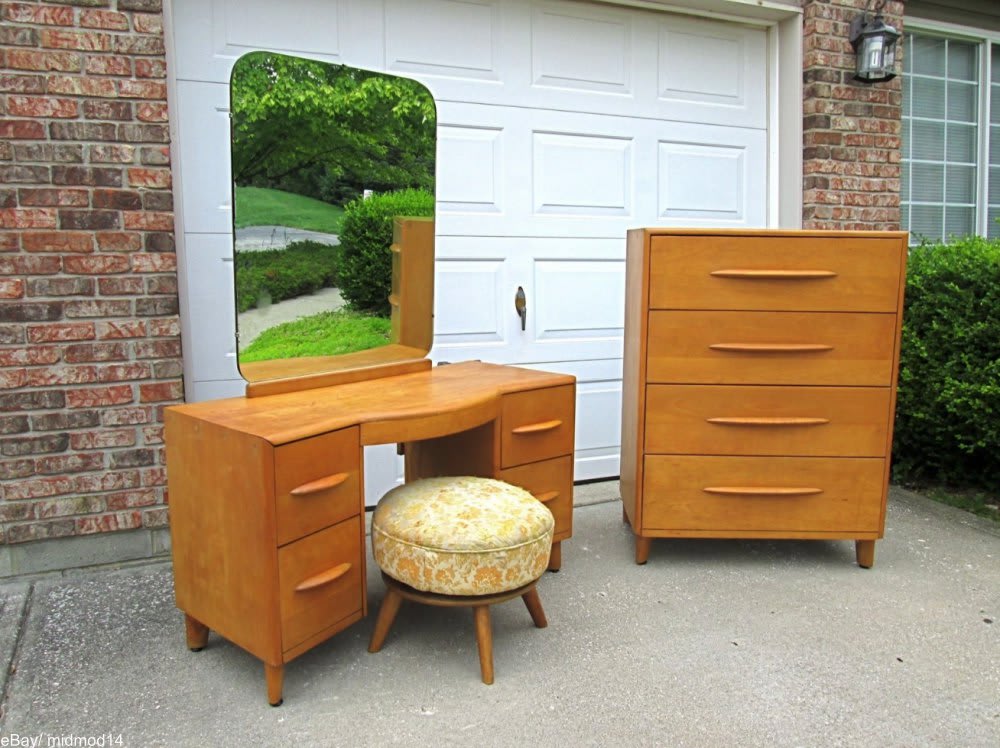 In 1935 the Streamline Modern line of furniture was introduced to great popularity. However, these early pieces were marked with only a paper label which often does not survive. The dark wood-burn eagle insignia we know as the Heywood-Wakefield mark was not introduced until 1949. The style was influenced by the industrial designers hired by Heywood-Wakefield who had shaped the look of America working with companies like Steubenville Pottery, Chrysler, and Herman Miller.

Many newlyweds in the 1950s bought Heywood-Wakefield expecting it to last a lifetime, which it certainly does with care since the designs are solid birch. Heywood-Wakefield made wood furniture in the Streamline Modern style (smooth, light, and with simplified and rounded angles) until 1966 when their high standards of quality proved to be too costly and styles had changed quite a bit. The Heywood-Wakefield Company filed for bankruptcy in 1981. But, the story doesn’t end there. 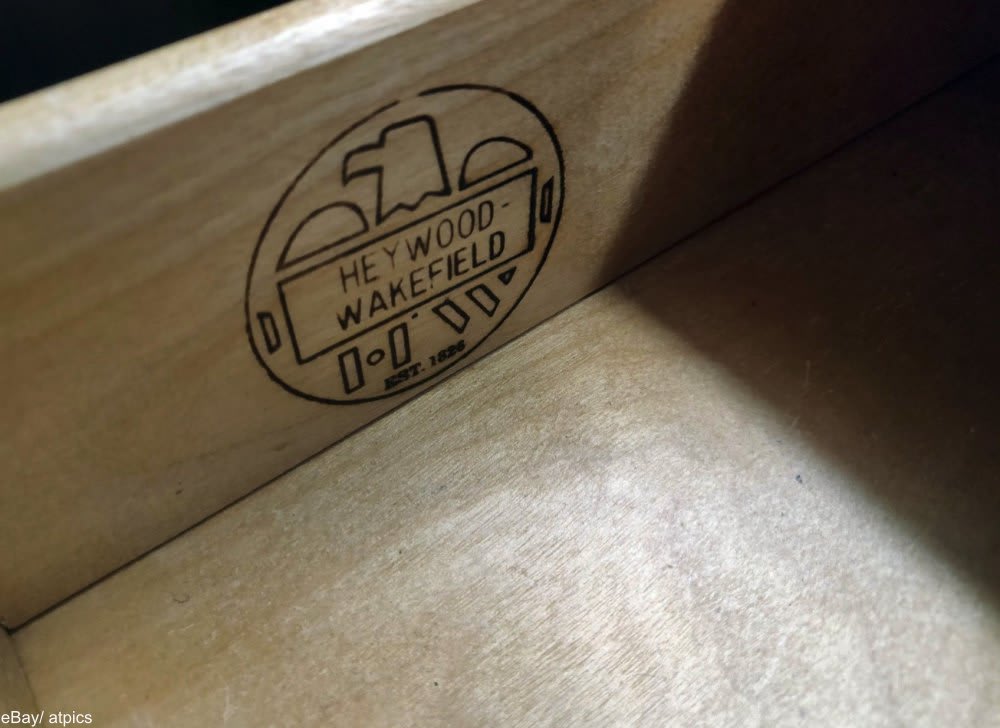 After having been astounded at the popularity of blonde MCM furniture at his vintage shop, one concerned seller bought the rights to the Heywood-Wakefield empire and the spark was reignited. In 1992 the South Beach Furniture Company (run by Andrew Capitman and Leonard Riforgiato) acquired the rights and production on the most popular pieces began again in the early 1990s.

Unofficially known as wishbone, dog bone, and surfboard, these designs are some of the more sought-after pieces of MCM Heywood-Wakefield. These pieces can sell for $50–$1,500 depending on the design and the size, although unusual pieces like this roll-top desk can command even higher prices. But, since there are still similar pieces being produced today, the heat is off to buy vintage unless you (1) want to save money or (2) love the look and exact colors of the original MCM Heywood-Wakefield pieces.

The Heywood-Wakefield Company is known primarily for the MCM streamline designs, but the company has been an innovator in several other realms as well. The older Heywood-Wakefield furniture pieces of rattan and wicker are exquisite in their details and designs can still command a few hundred dollars or more per piece. The rattan pieces include not only peacock chairs and their scaled down ice cream parlor counterparts, but also a beautiful array of rattan lamps as well! Heywood-Wakefield also made a range of colonial style pieces as well, something many folks do not know about. 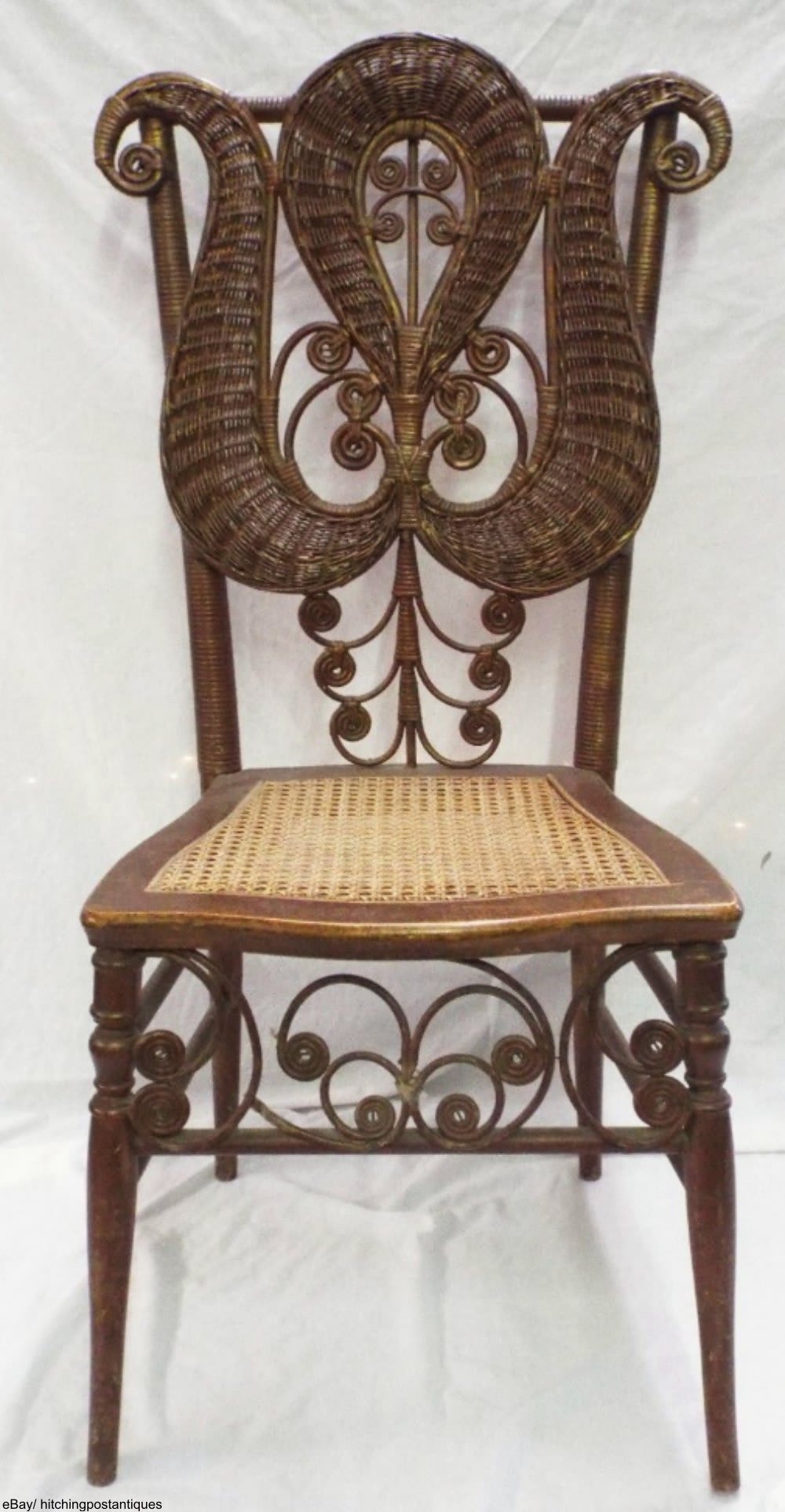 In addition to the wicker and MCM lines, Heywood-Wakefield also made a name for themselves in commercial seating. From the 1920s through the 1960s, Heywood-Wakefield produced a range of theater seating, including ornate Art Nouveau theater seats which light up and ultra simple flip down movie seats. Heywood-Wakefield is also known for their colorful (yet simple) fiberglass chairs which came in several sizes and were often used for school or office settings. 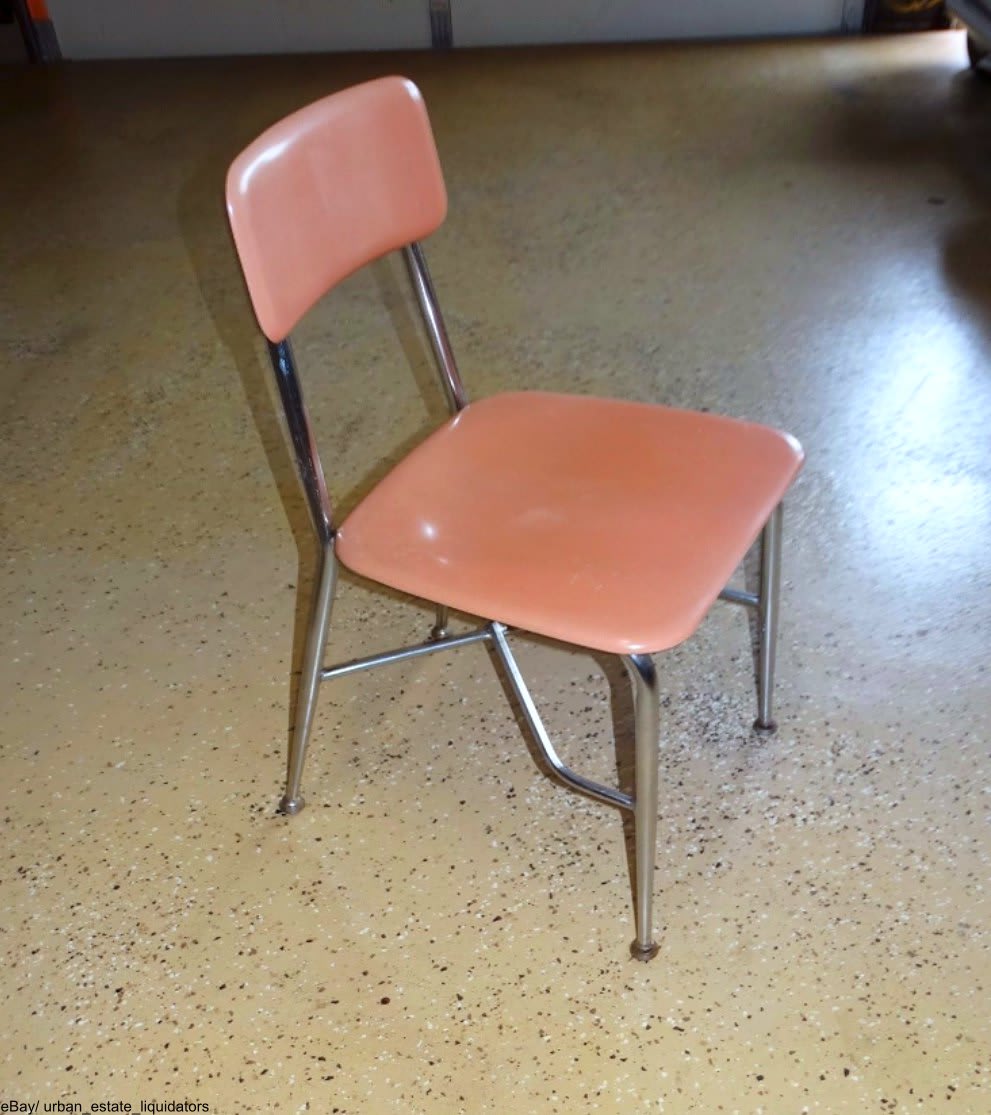 Today a brand new piece of Heywood-Wakefield furniture can set you back more than if you bought the same type of item in a vintage shop. The pros of buying new are that of course the pieces will be in pristine condition having come direct from the production floor. While the style in production today is very similar to the most iconic pieces from the 1940s and 1950s, it’s important to note that there are many Heywood-Wakefield pieces that simply are not available new.

The infamous wishbone table, with its distinctive bowed legs is still being made, as are the so-called dog bone chairs and bed frames. However, not all the of modern, blonde (or wheat and champagne being the most popular of the MCM line) pieces are still being made. Accessory items like lamps, wall-mount shelves, and their famous poof vanity stools can only be found from vintage and antique sellers. 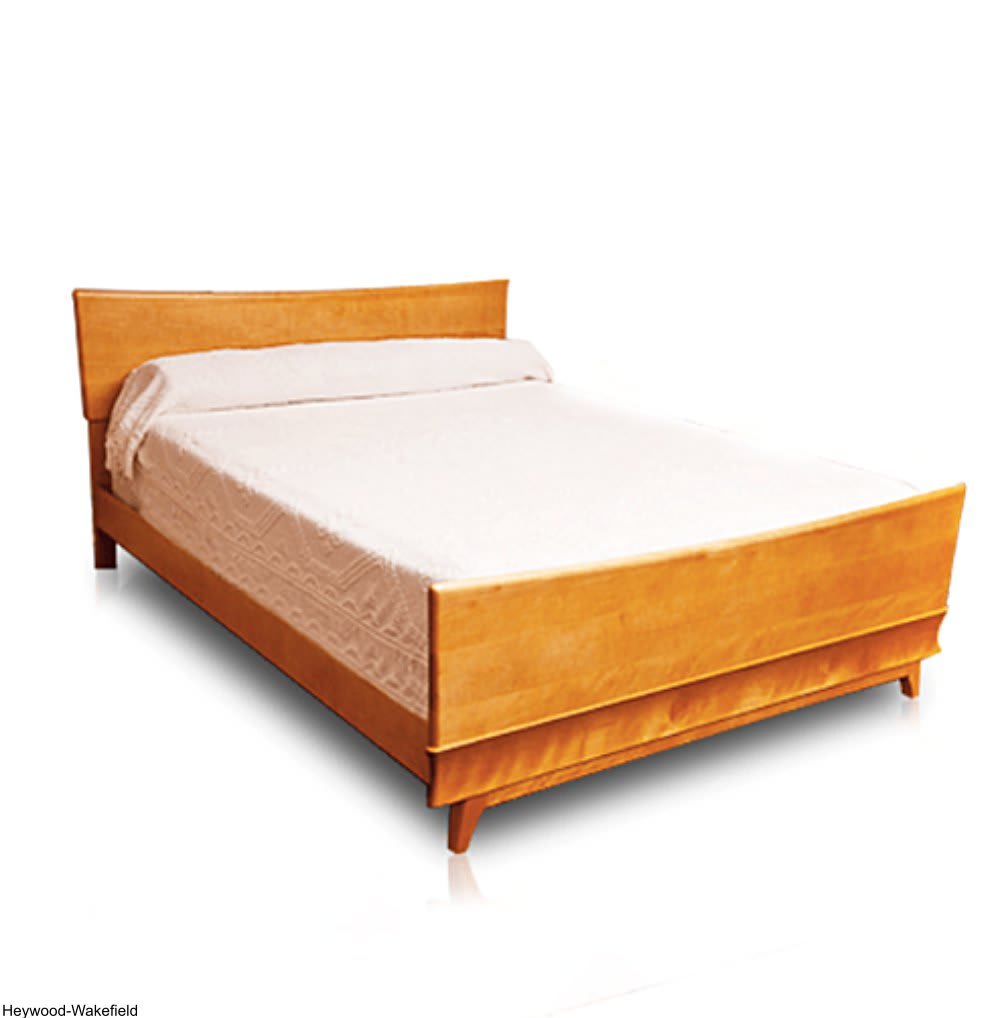 So, what is the price difference between vintage and newly produced? The dog bone square coffee table for instance is a classic piece. Vintage pieces in this design can go for as little as $200, while a brand new one will set you back $695. Besides new condition, the other advantage of buying new is that you can have the item(s) customized to color in the production process.