She was called Sisi but her name was Elisabeth Amalie Eugenie, the daughter of a Bavarian Duke and Princess, and she strikingly shy as a child. But, Elisabeth would become one of the most celebrated figures of her era, not only for her beauty but also her love of travel. But, sadness would rock her unconventional life in from the moment she became Empress until her death. 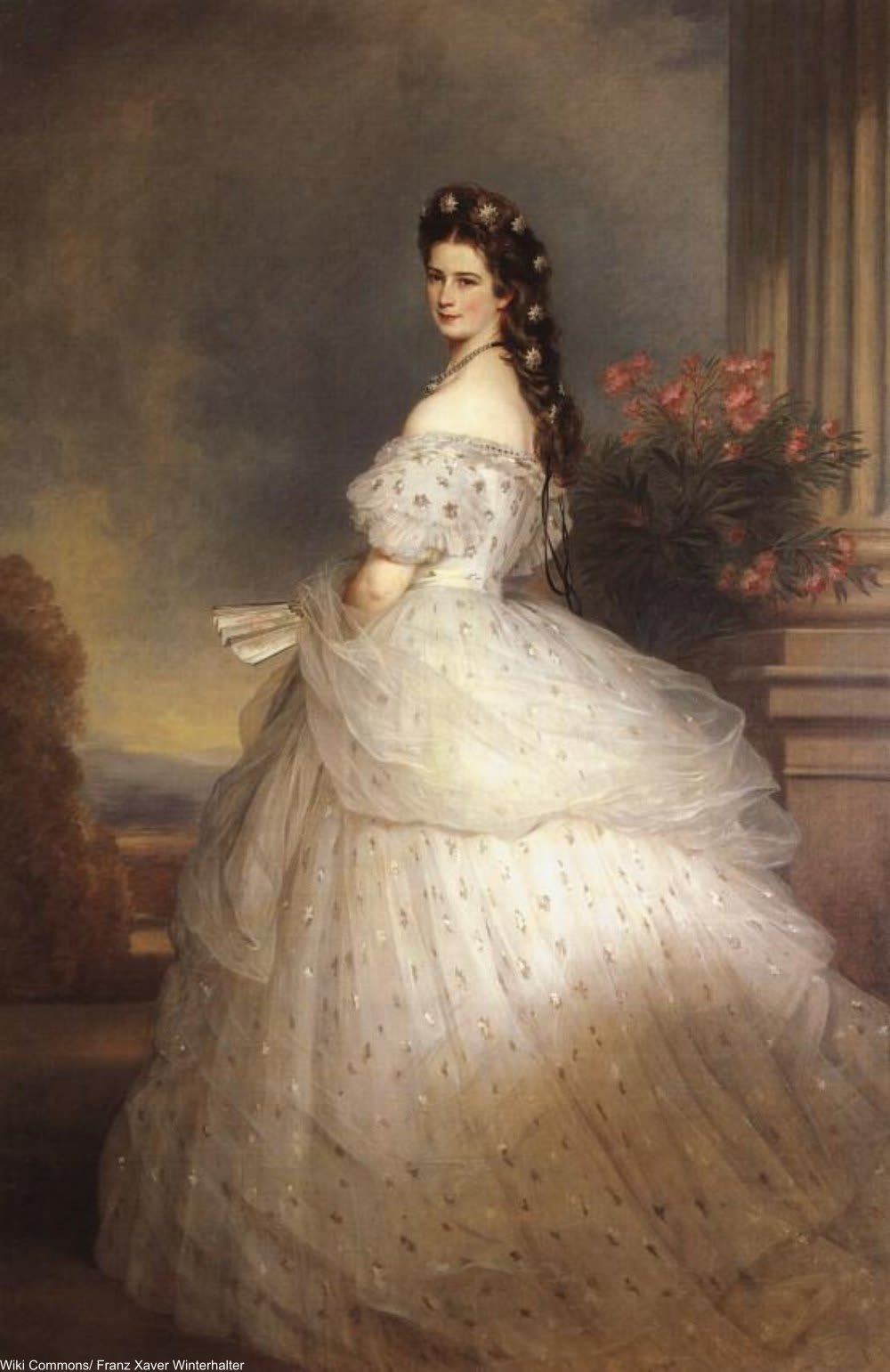 Elisabeth became the Empress of Austria when she married Emperor Franz Joseph I at the tender age of only 16 (in 1854). Her sister, Helene, was initially the intended match for the Emperor, but once he saw her, Elisabeth became the object of affection.

Her mother-in-law, Archduchess Sophie, thought her shyness and sensitivity was a royal liability. Sophie would drive a wedge into Elisabeth’s marriage and would eventually take control of her grandchildren’s rearing. 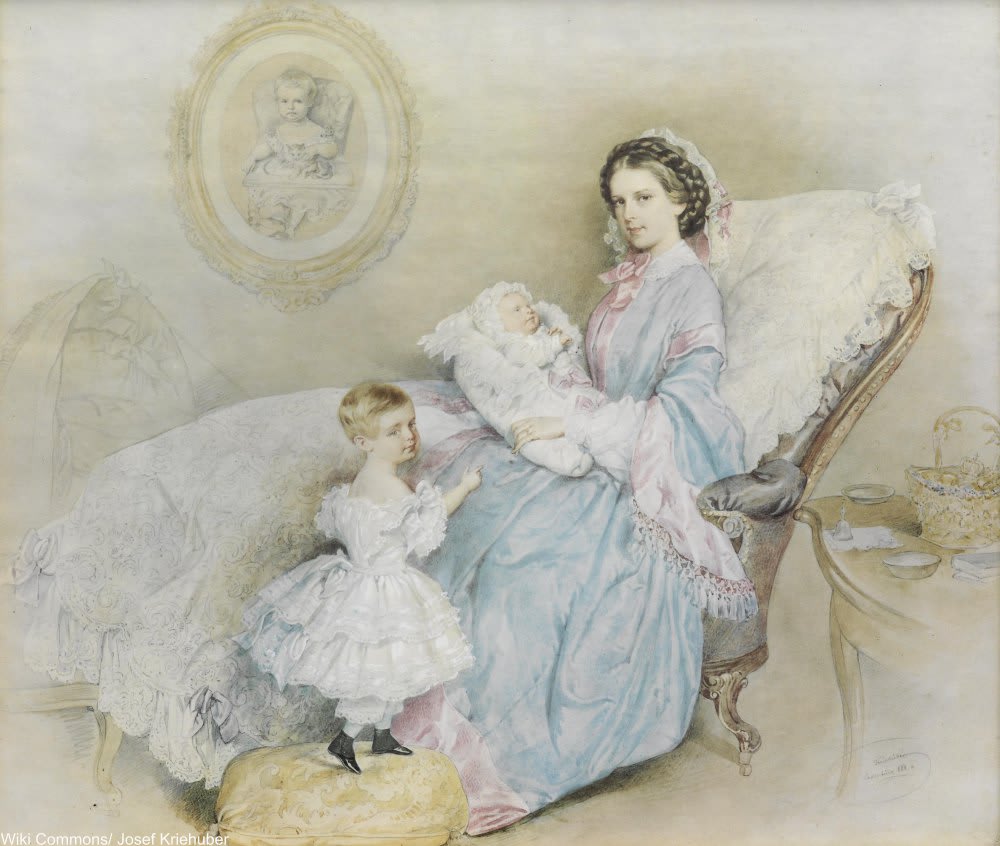 While her first child, Sophie, died in 1857, it was the 6 year period from to 1888-1892 that Elisabeth suffered most. It was during this time that Sisi lost her sister, her mother, her father, and her only son.

The last years of her life were particularly painful after Rudolf (the Habsburg’s only heir to the thrown) committed a murder-suicide upon himself and his 17-year-old mistress at his hunting lodge, a tragedy Sisi never truly recovered from. Their deaths became known as the Mayerling Incident and set in motion a series of events which would eventually lead to World War I (the Archduke Franz Ferdinand would become heir to the throne after Rudolf’s death). 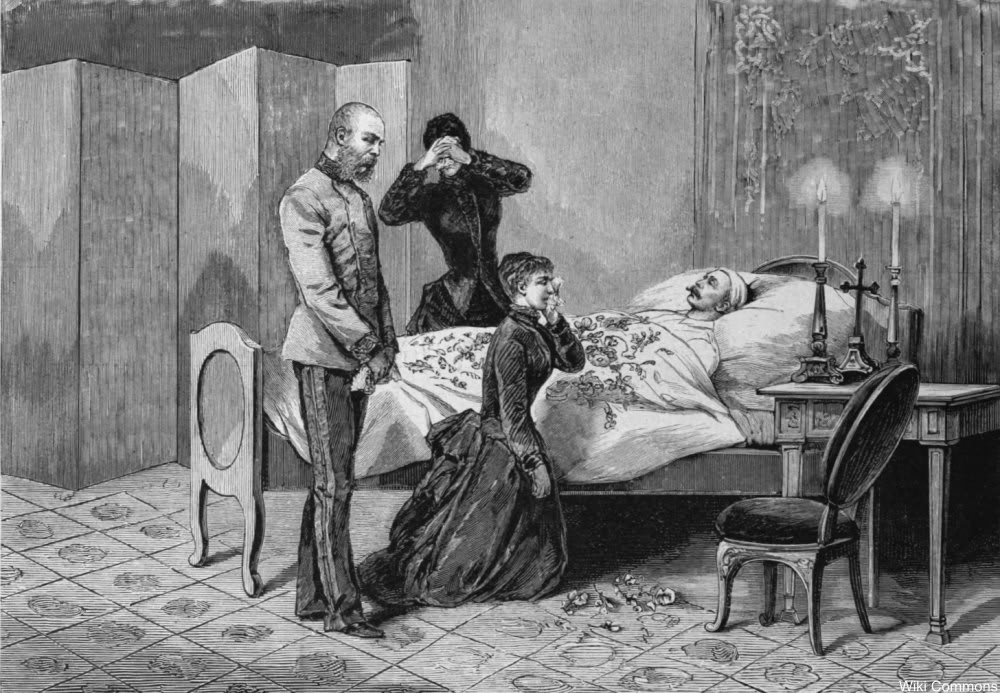 The Empress’ Restless Way of Life

After so many stresses, Sissi became obsessed both with travel and weight loss. Travel was her escape and she spent a great deal of time doing so, sometimes only escorted in public by a lady in waiting. Elisabeth was fond of Hungary, which she visited often, and helped to bring about the Austro-Hungarian Empire (after which point she was also the Queen of Hungary).

The Empress also loved Greece and had an elaborately lavish home built on the Island of Corfu, which she quickly tired of as it had become a destination, something she abhorred. Elisabeth also got the image of an anchor tattooed on her shoulder as an homage to travel, something her husband found wild and unbecoming of a lady. 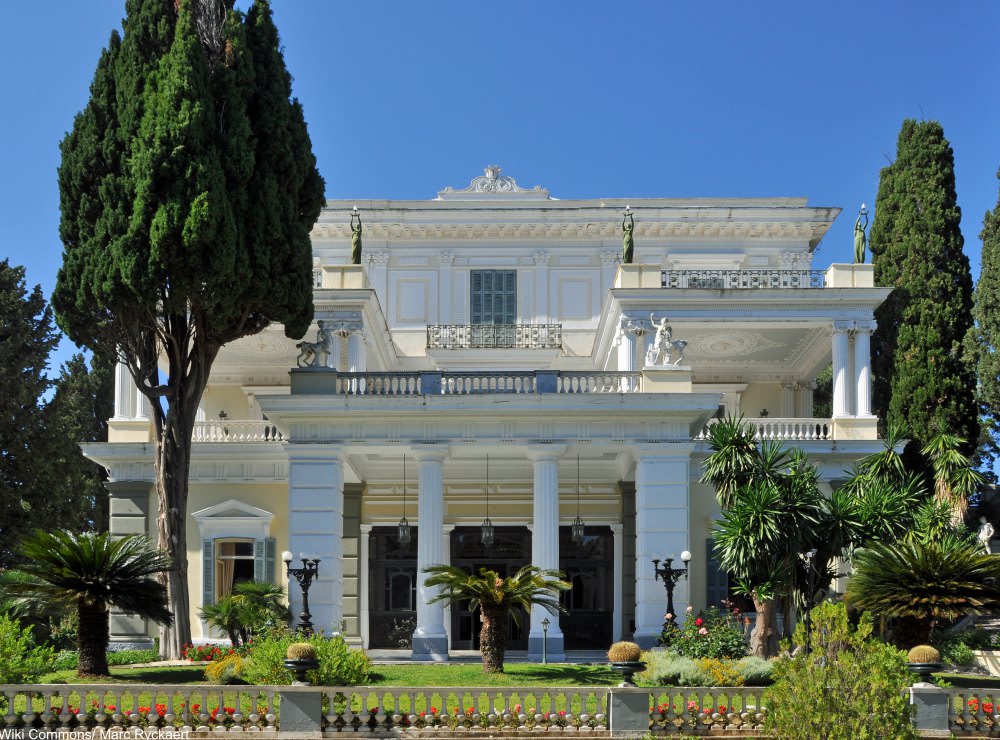 Empress Elisabeth’s Corfu home was called Achilleion. These days the house is open to tours. Via/ Wiki Commons

Her periods of severe depression, during which time she would eat little, morphed into a compulsive eating disorder. And, Elisabeth would work out, using rings, dumbbells, and riding to achieve her ideal figure of less than 110 pounds. This, coupled with the fact that fashion was a very necessary part of the monarchy, meant that the Empress cinched her corsets tighter and tighter, eventually achieving an unbelievably tiny waist. 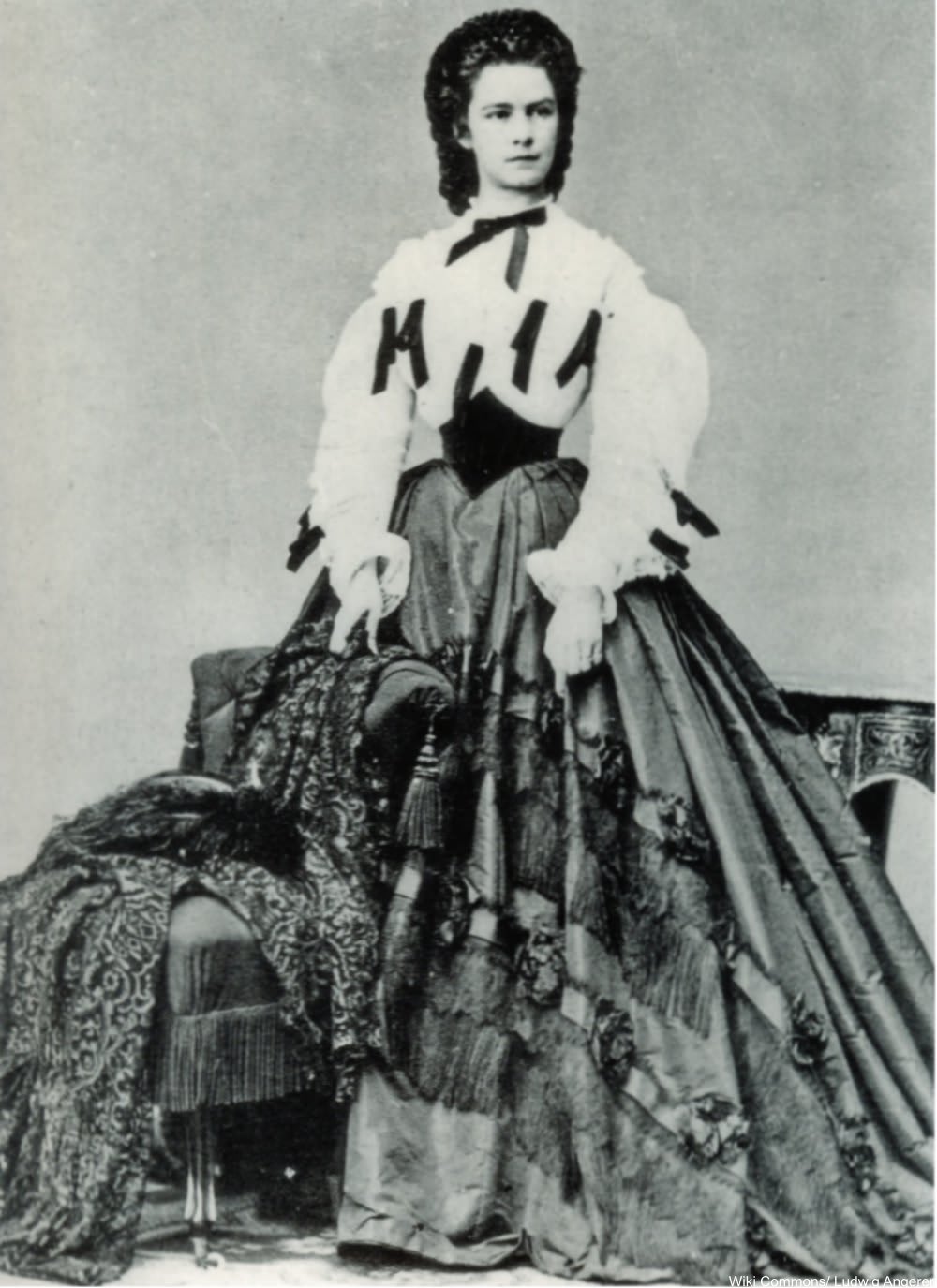 Empress Elisabeth’s tiny waist is shown off here with a hoop skirt and elaborate belt. Via/ Wiki Commons

Some speculate that Elisabeth’s corseted waist was about 19 inches around. Elisabeth embraced the slimmer fashions of the late 19th century as she thought they were far more flattering to the figure. She was known also for her stunning chestnut brown hair which reached nearly down to her feet. 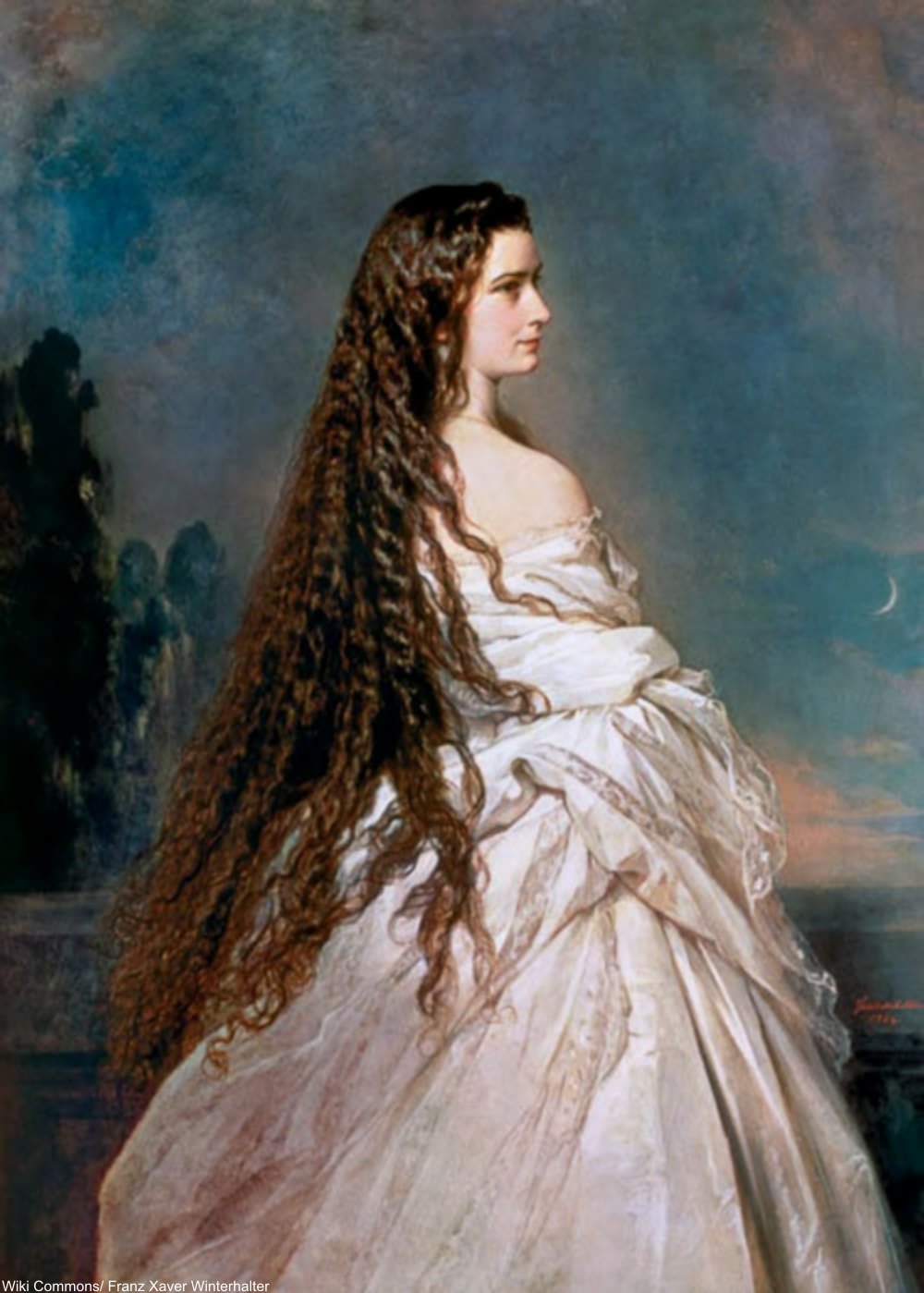 There are quite a few paintings of the era which depict her long, flowing tresses. Via/ Wiki Commons

While she kept up her looks, Elisabeth spent as much time away from the royal palaces as possible, preferring flight to reminders of her family at home.

The Assassination of the Empress

The Empress was assassinated in 1898 in Geneva, Switzerland, by an Italian anarchist (Luigi Lucheni) who had first intended to kill the Duke of Orleans. The Duke, however, had already left on his intended ship. While she wasn’t the first target, Lucheni wanted to make a statement against all aristocracy and so focused his attention on Empress Elisabeth instead. 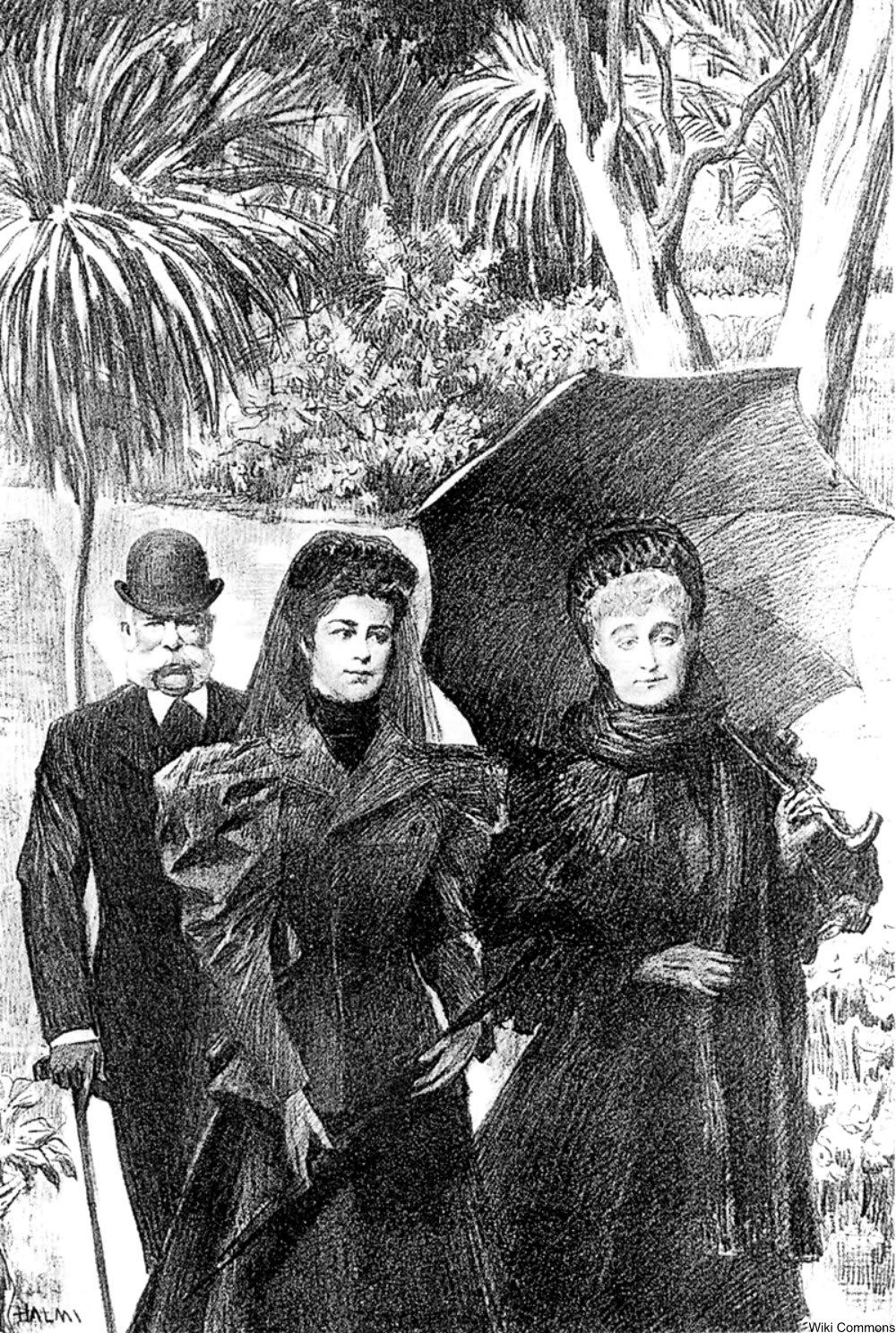 The assassination happened on her way to board a paddle steamer ship, the Genève, and even after being stabbed through the heart with a long file, she was able to make it aboard her ship of her own accord. The ship left dock, but was turned right around again once it was made apparent to the captain that the empress was aboard and was badly injured.

From there she was taken back to her hotel where she was said to have been dead upon arrival. It has been speculated that the reason she was at first able to walk after the fatal stab wound was that her corset was so tight that it restricted blood flow, acting as a compressive garment. 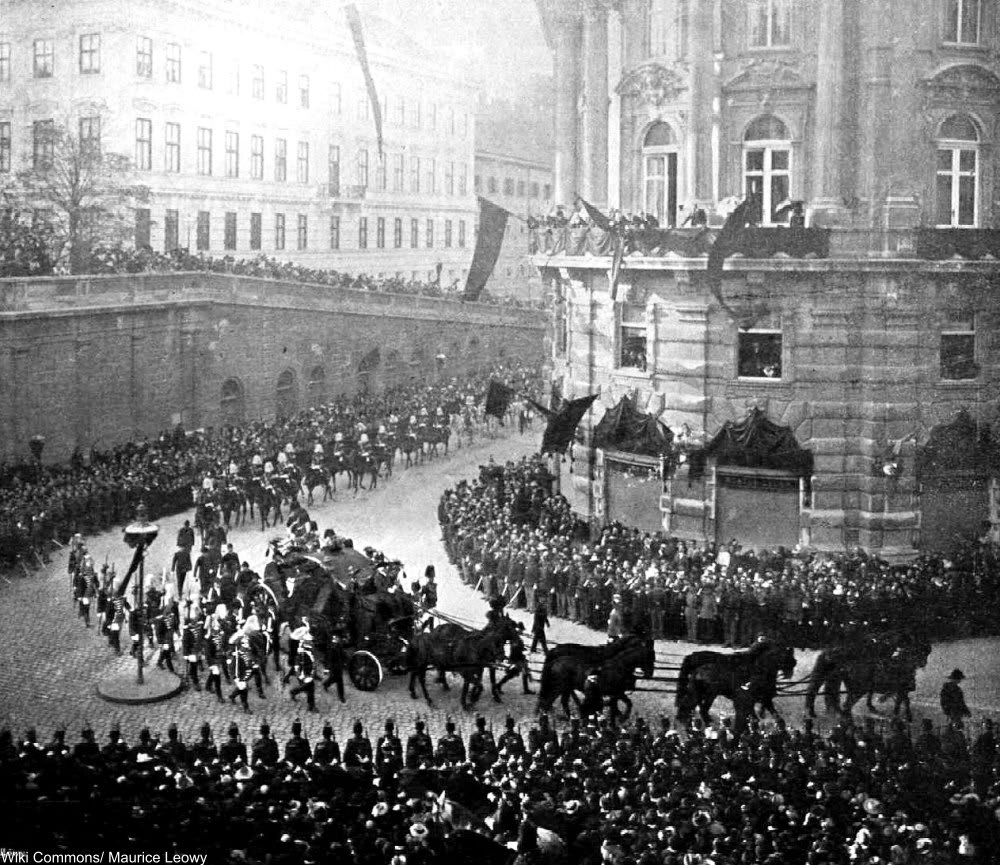 Empress Elisabeth’s funeral was a grand farewell and posthumous portraits commemorated her renowned beauty and style. While her name is often forgotten from history these days, there are some who have compared her to Princess Diana.

Both Elisabeth and Diana were thrust into public royal life at early ages, both had turbulent marriages, both had eating disorders, and both died well before their time. And, certainly, both were celebrated for their beauty and style. There would be no Habsburg Empress after Elisabeth, but even if there had been: she was one of a kind.