This 54-Year-Old Grandma Is A Sports Illustrated Swimsuit Model

You don’t hear about many models in their fifties, so it is very inspiring when you learn about a successful one. Paulina Porizkova has been modeling for decades and has even appeared as a judge on the popular show America’s Next Top Model. Now the 54-year-old grandmother is appearing in the 2019 Sports Illustrated Swimsuit Issue.

She first appeared in the magazine in 1983. Sports Illustrated has become more inclusive over the years, but Paulina is now the oldest model to be on the cover. We hope this inspires them to add other more mature faces to the magazine cover! 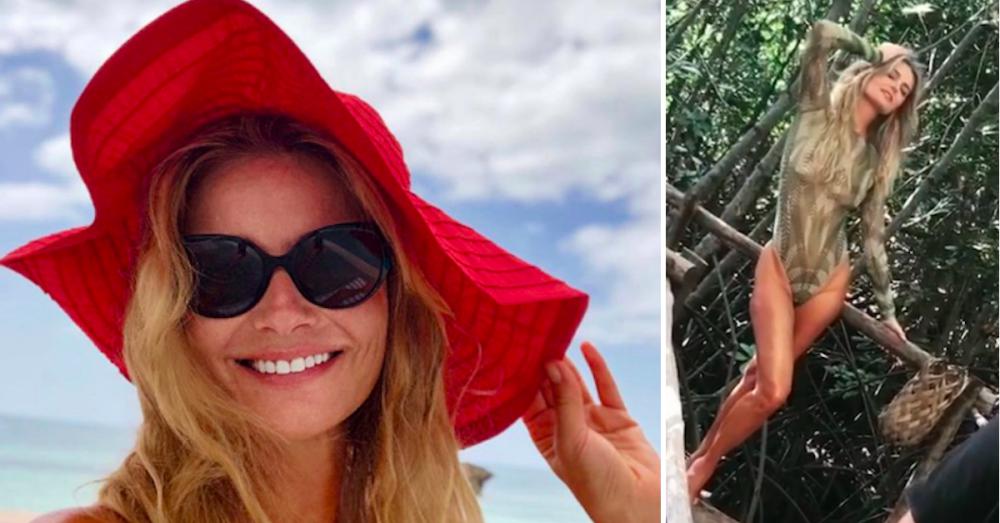 See Some Of The Sneak Peeks Of The Shoot

Well, here it is folks, the REVEAL! I’m in the Sport Illustrated Swimsuit as just one of the core girls (not a special insert) at the age of nearly 54. @mj_day, the chief editor who is in my mind the one most responsible for inclusive body type and skin color in the fashion and beauty world, decided to tackle the final barrier- age. And thumbs up for the incomparable @christiebrinkley, who appeared in the issue last year, proving being sexy is ageless.#sexydoesnothaveanexpirationdate

At first, Paulina was thrilled, but then she said she started to think about having to pose in a bikini next to girls less than half her age. However, she said she was honored to break this barrier in the fashion and modeling industry. Often, models are considered “too old” once they reach their thirties! That is so crazy!

The 2019 Sports Illustrated Swimsuit Issue comes out in May, but Paulina posted a few sneak peeks on her Instagram account. She looks absolutely amazing! She wears very skimpy bikinis in the shoot it seems.

Check Out More Photos of Paulina

‘It sucks.’ @People magazine article link in bio via @newbeauty . “When your entire life has consisted of looking good, aging publicly, in a word, sucks. This is not for the faint-hearted.” . Hair by my bestie: @brianmagallones Photographer: @mikaelschulz MUA: @kajsasvanbergmakeup Stylist: @chapoteau . #paulina4decades ❤️

HELLO FROM PRAGUE! Day one, off the plane and into the streets so as not to fall asleep. Photo @kotcasek #Praha#prague#czechtravel

Paulina has two sons and two grandsons. She also has some step-granddaughters, nieces, and goddaughters. She said she wants to be a good influence for them and prove that age is just a number. It is still unbelievable that she is a grandmother!

Got plenty of reasons to be smiling, only one of which I can share for now: the weather is glorious where I am! #work #lucky #blessed

The photos were shot on the beaches of Watamu, Kenya, by photographer Yu Tsai. This edition of the magazine will be released sometime in May 2019. Will you grab an issue? Do you think this is inspiring or do you disagree with the idea of the Sports Illustrated Swimsuit Edition?

I hope we all understand that a photoshoot is in part a magic trick. You have been made up by the best people in the business; had hair added and blown and sprayed and makeup expertly applied so it looks perfectly natural and you are just the best version of yourself. You have tried on a hundred bathing suits and bikinis, and only the most flattering have been selected.A great photographer will know exactly where to put you for the best light, and make you feel confident by telling you how beautiful you are – on repeat. Your body shines with a fake tan and bronzers. And then you can shoot endless frames to only capture one single moment on camera. And that perfect moment will be taken to an artist who will make sure any tiny flaws are erased. None of us look like we do in photos – in real life. (for photos of what I look like with no make up and no magic, check out the fitting photos.)Here are the magicians responsible: @mj_day the brain of the project, and selector of the most flattering suits, @yutsai88 the eyes of the project, a photographer of incredible charm and charisma besides being a master of light, @tracymurphymua spectacular effects master, making me look perfectly natural but so much better, @jrugg8 for that amazing head of hair and a spectacularly bad photo of the two of us 😜. #sexydoesnothaveanexpirationdate

If you enjoyed this article, please SHARE with your friends and family who would love to read this and learn about Paulina Porizkova!

Check out this video of Paulina Porizkova and her shoots for Sports Illustrated: