Amy Kleinwachter, who’s the owner of Old World Antieks, spends much of her time going around the globe hunting for heirloom-worthy pieces and unusual architectural salvages. To date, her best find has been a 14-foot round grain silo that came from a ranch only a short distance down the road from her home in La Grange, Texas. Since she had already built an entire farmhouse out of salvaged materials, it was only natural that she would be struck with inspiration as she envisioned the silo serving as the perfect guesthouse addition to her 10 acres.

Once the silo was brought over, Amy enlisted the help of Judy Kurtz – a local contractor – to go through and pick out materials from Amy’s huge collection of weathered beadboard, sheet metal, and window frames.

“It took a surprising amount of geometry to make things work in a circle, but Judy nailed it!” Amy said. 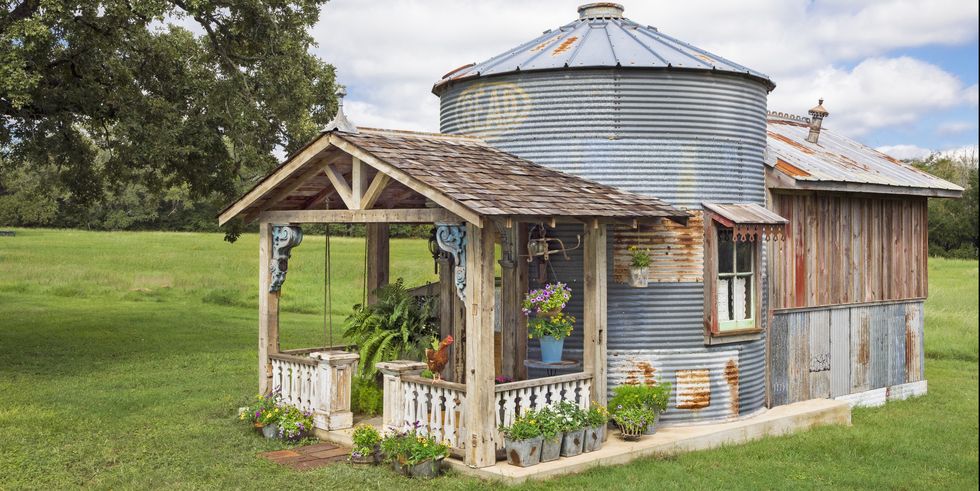 The completed 1,000-square-foot structure now has the inclusions of a front porch, as well as a bed and bath extension. This makes it perfectly suited to hosting family and friends, as well as any visiting pickers.

“We joke that it’s given new meaning to ‘gather ’round’,” Amy said. 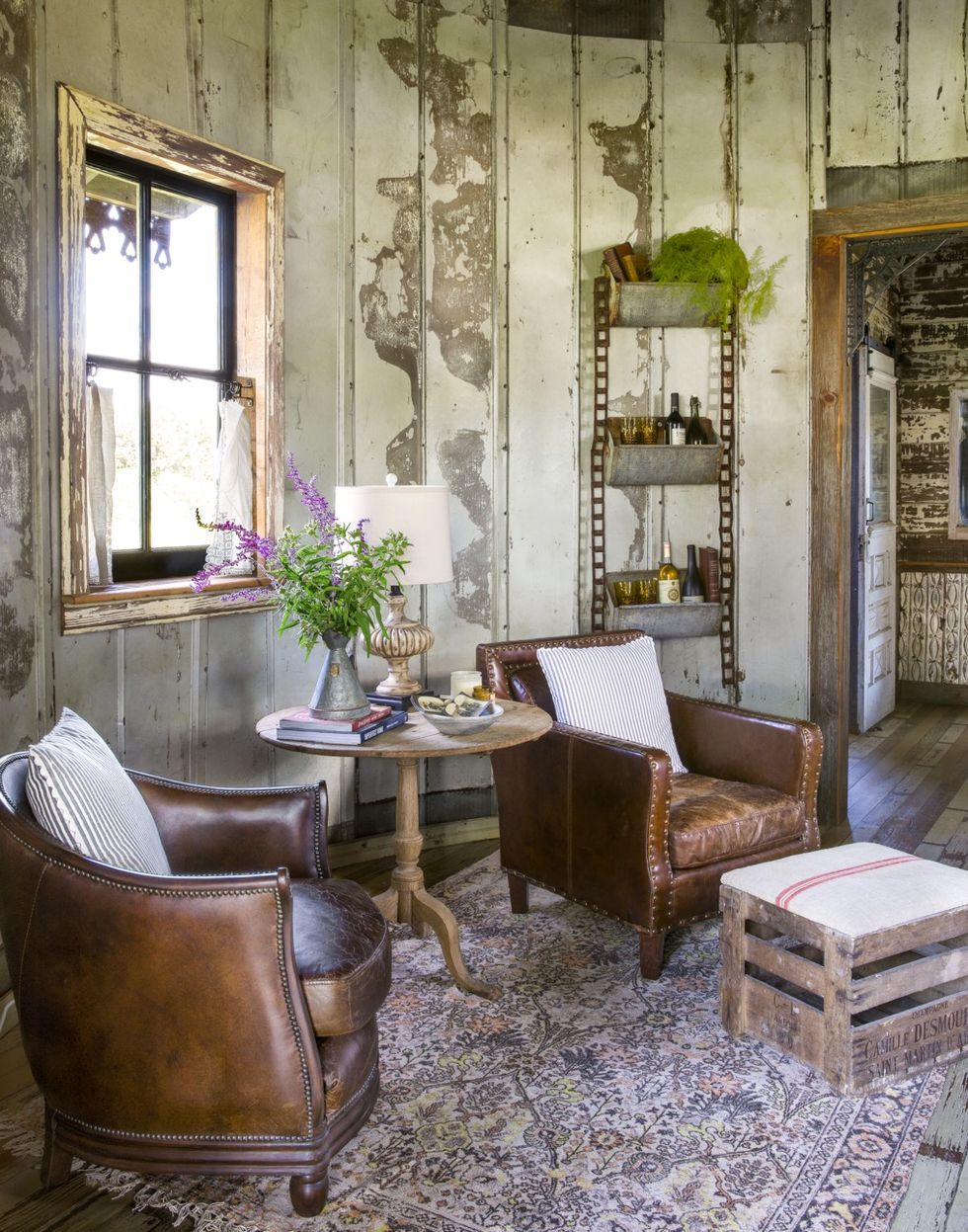 Some of the touches are quite subtle but make the guest house look quite cozy and chic. Like in the living room, an old Champagne crate was cleverly converted to a footrest, in part due to a grain sack-cushion topper. A pair of mismatched leather chairs along with an antique bleached oak table give the sitting area an eclectic vibe. 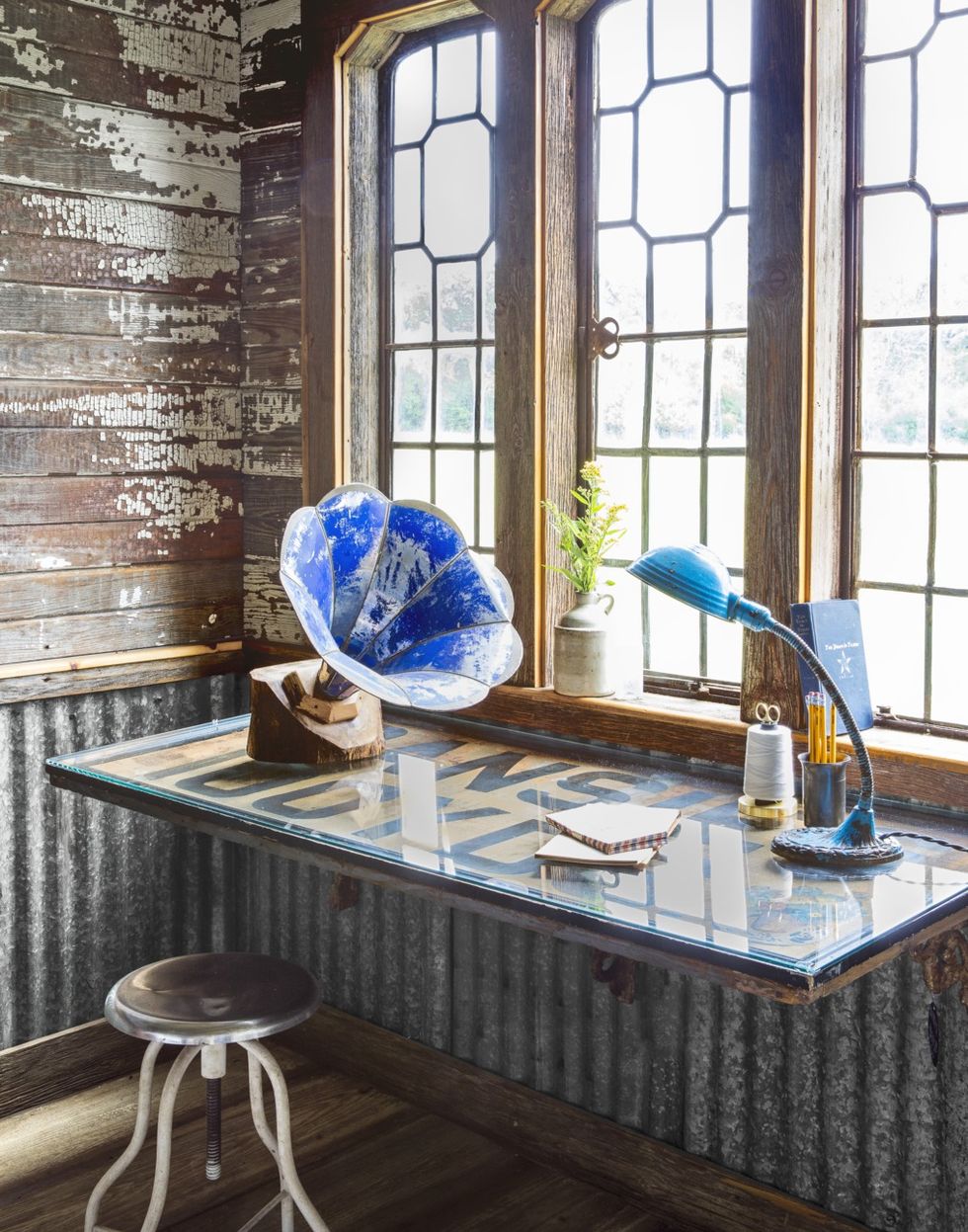 There is even a little office space after Amy turned an old floral-stand sign into a floating desk and hung additional signage. If you’re looking to buy old signs, Amy has some advice, “Ask questions. A good dealer will know a backstory and have a clear grasp of the materials. If they’re fuzzy on that, it’s probably a fake.” 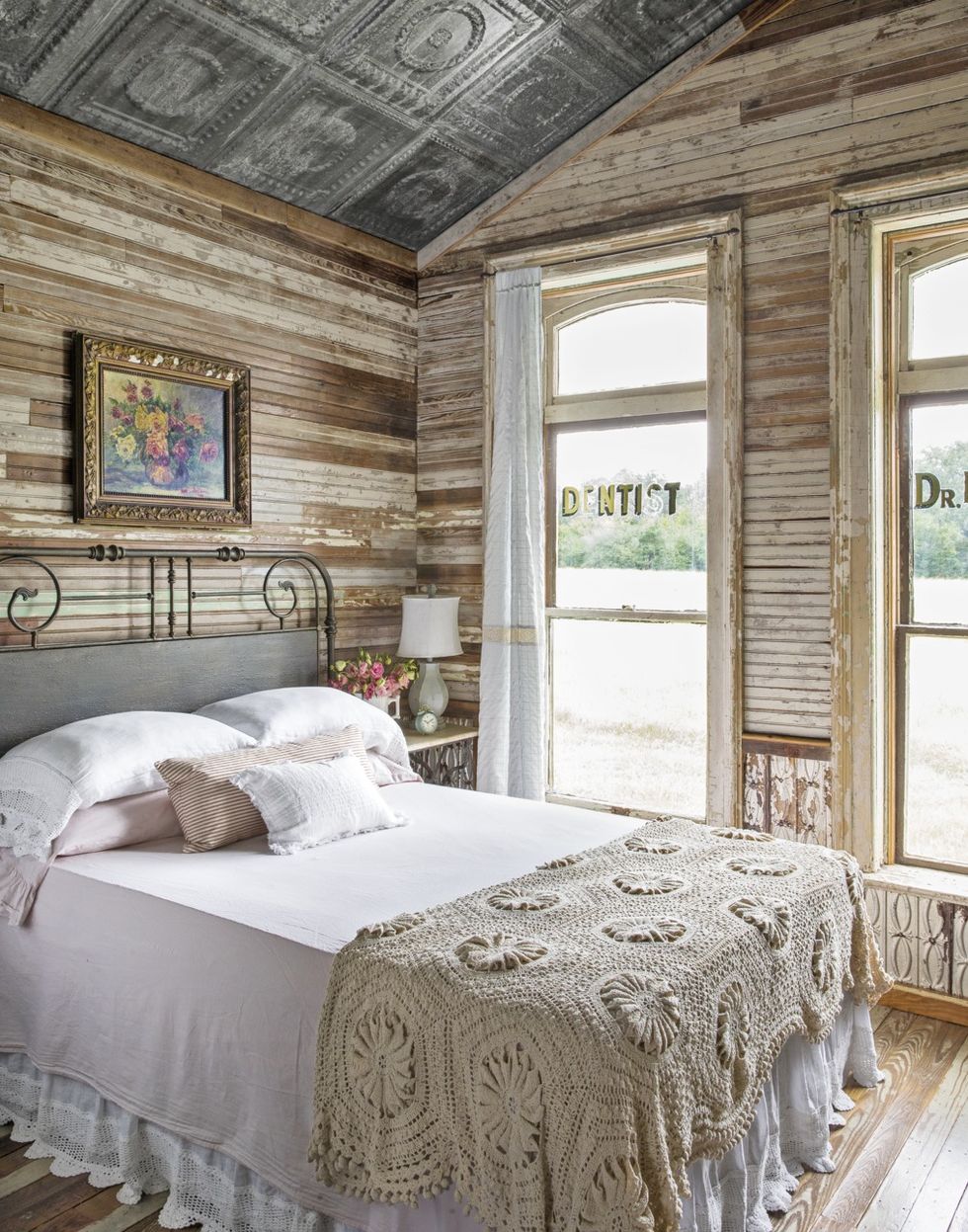 For the bedroom, Amy salvaged some old wood from a nearby historic Texas home. It was then treated and sealed with a Varathane polyurethane sealant in order for guests to avoid breathing in lead paint. If you’re thinking of doing something similar, you should check with your local health department or contractor for more information on using this technique. The walls were textured, so she paired the look with a wrought-iron queen-sized bed from miltonsfurniture.com and gave it some new linens from gypsyville.com. Amy had to buy the bed new, as she says that finding a comfortable antique queen is almost next to impossible to do. The oil painting was a find from a European antiquing trip. 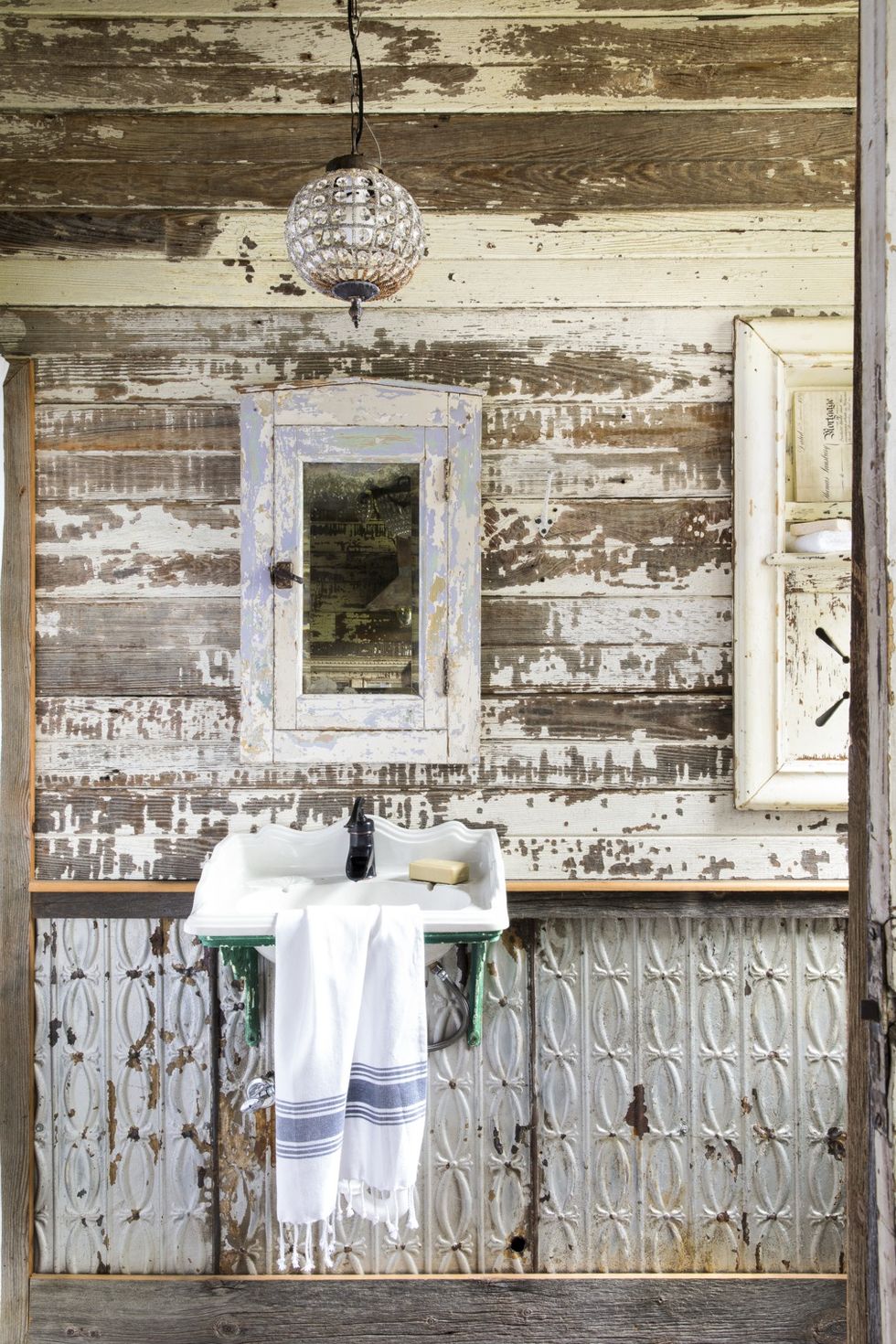 “This is the one thing a picker can never have too much of. When placing planks, I pay attention to paint weathering. I’m careful to do it in a way that looks organic—nothing too perfect, but nothing too random either,” she said about the bathroom. 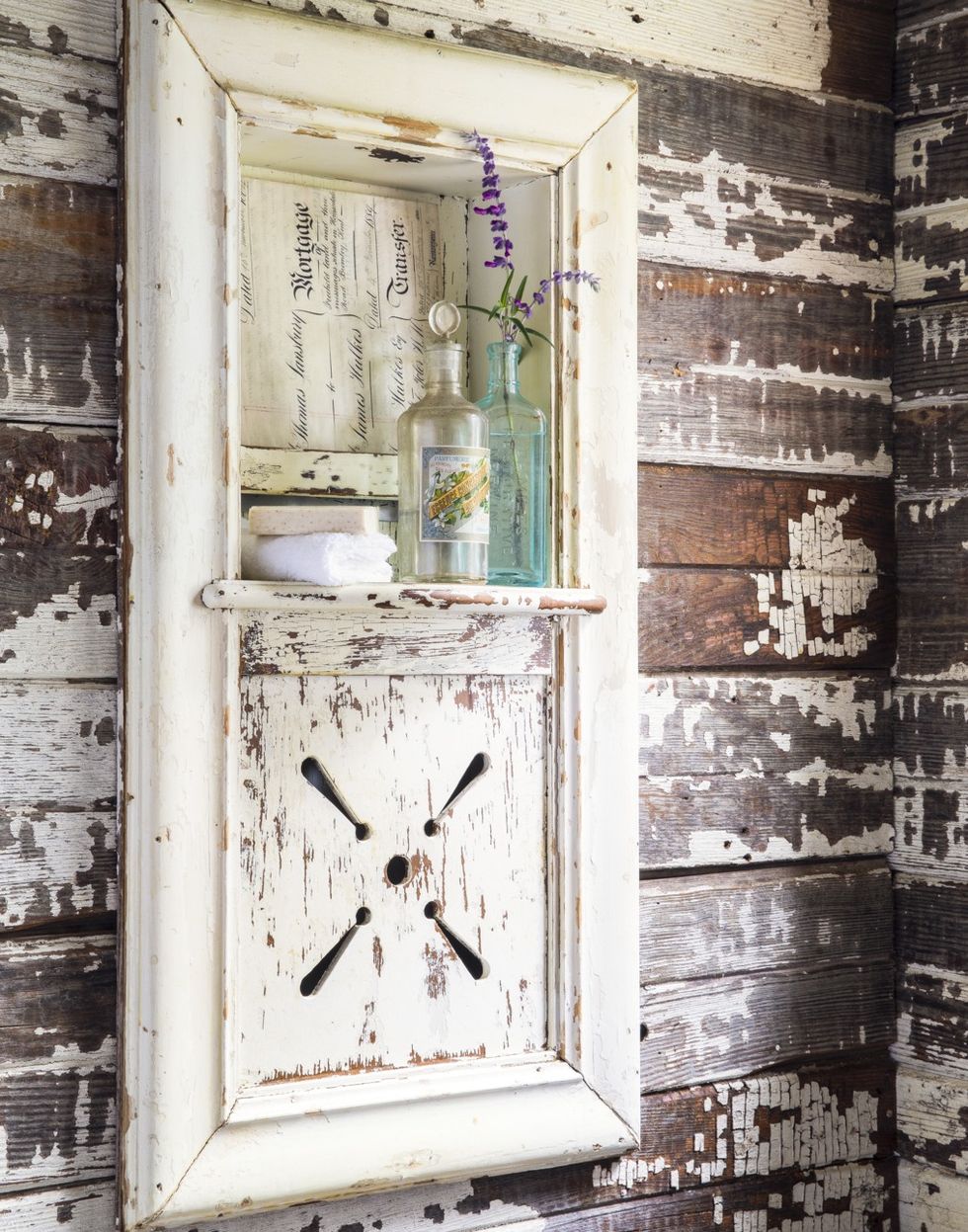 As part of the bathroom vignette, she gave a second life to an old phone nook, which now gets used as flush-mount bathroom shelving. Pretty clever. 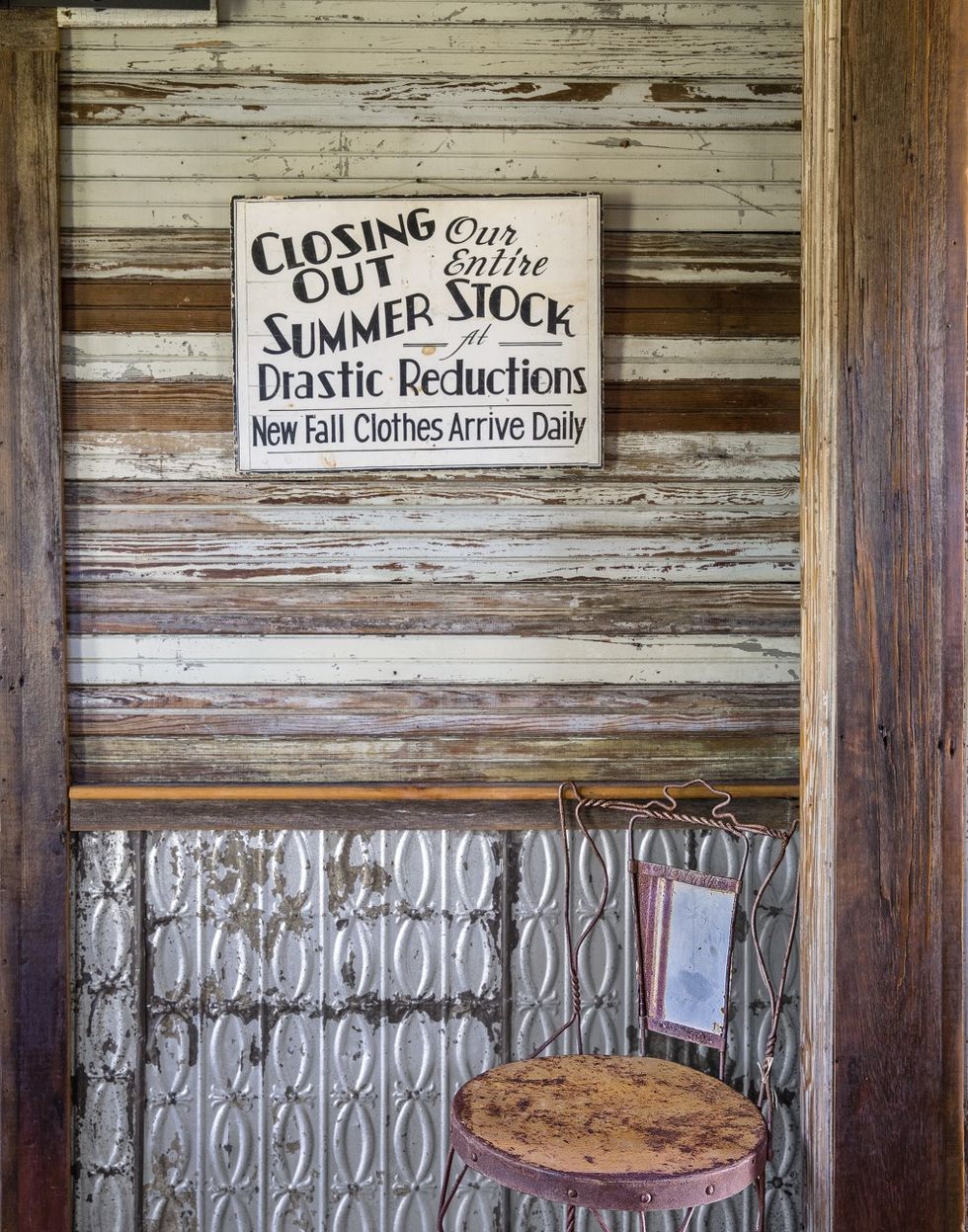 For her wall décor, Amy bartered with an Etsy vendor in order to score this liquidation sign. 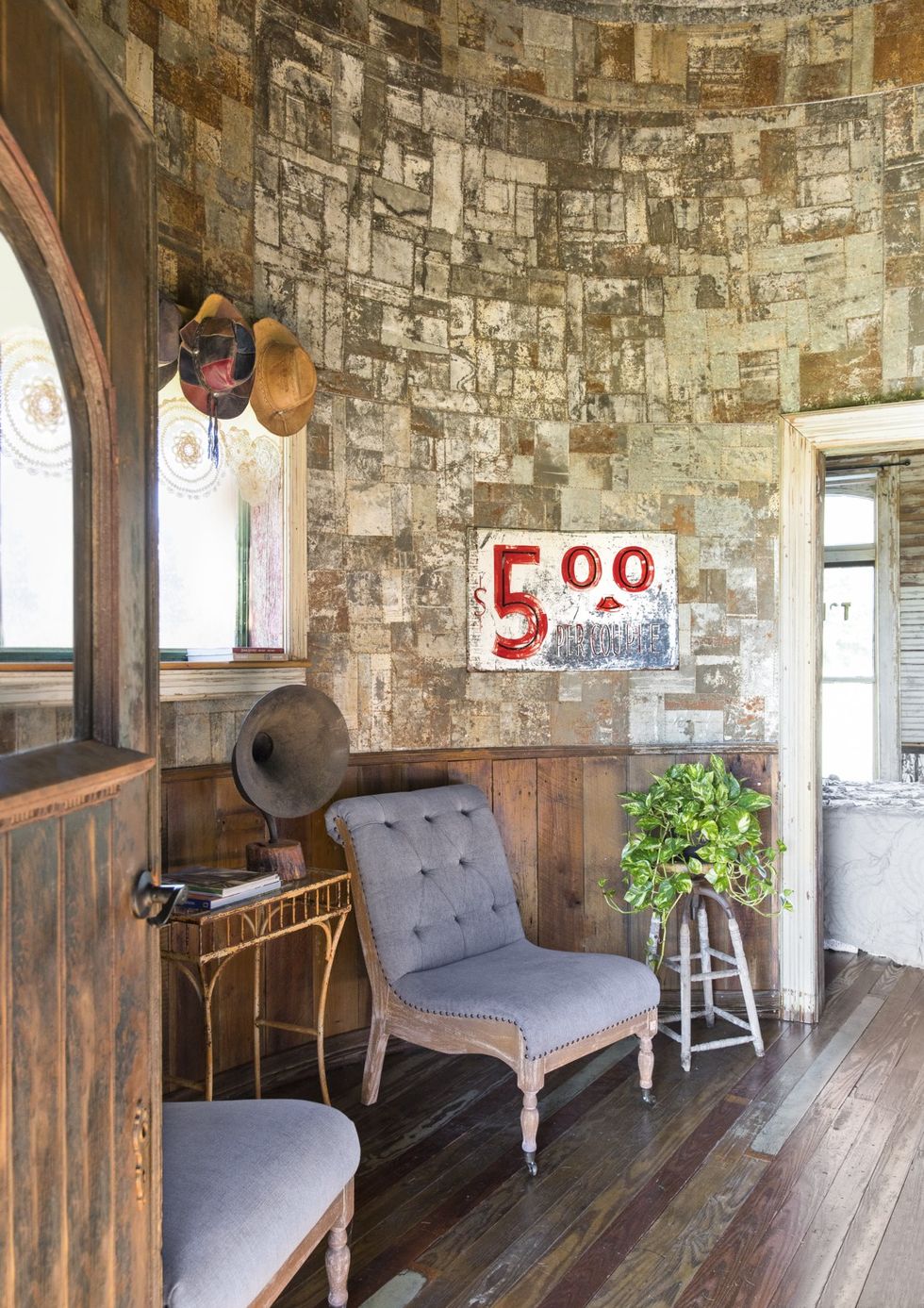 Years prior, Amy had convinced a friend to purchase an old set of dental panes from a dentist’s office, which she then bought off her friend for the bedroom. “It’s essentially a tin can and inherently dark,” Amy said of her silo. “I waded through my stash for window options with ample height and modest width to maximize natural light and still work within the constraints of the circular design.” 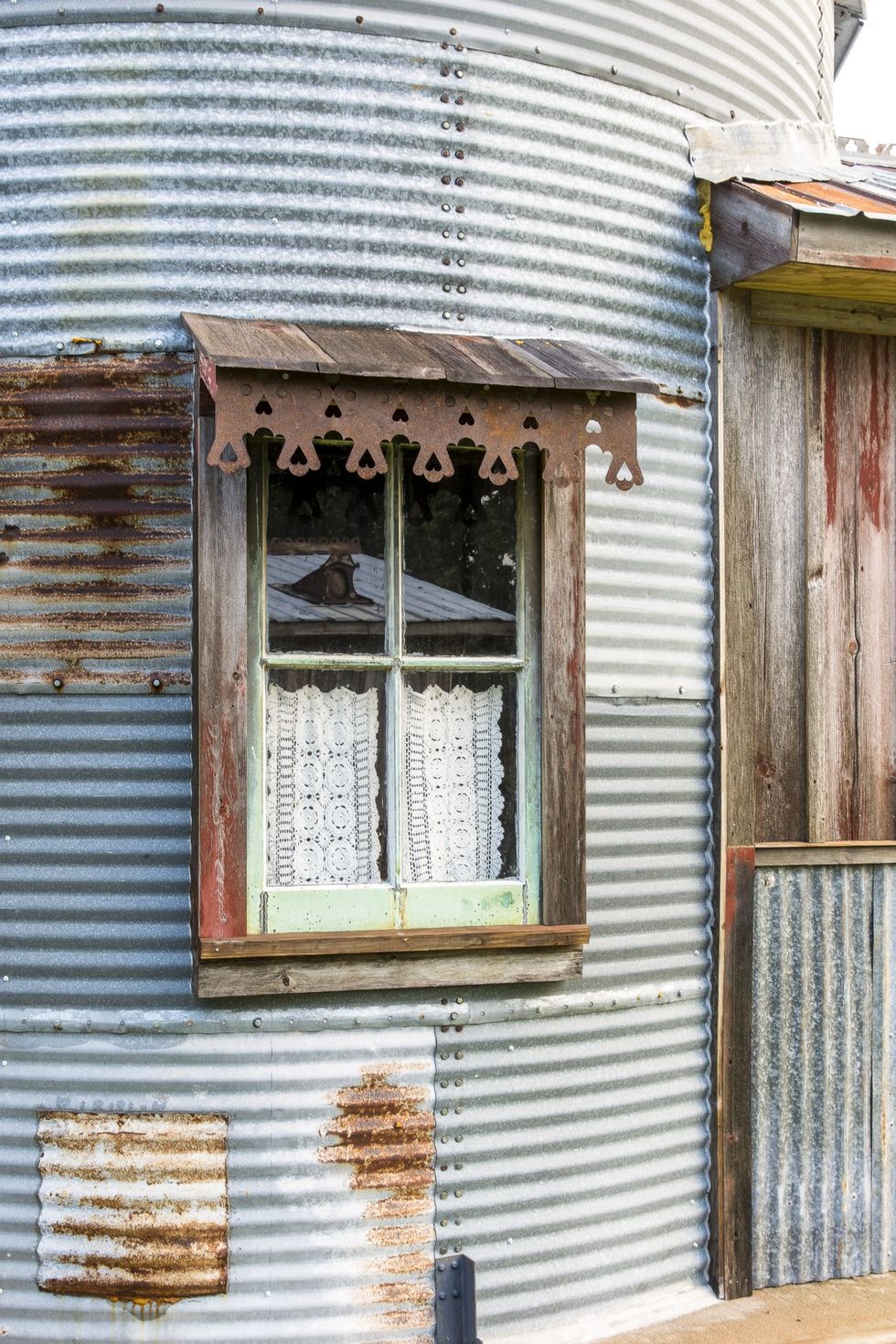 “Old windows are one of my favorite things to hunt for, but metal awnings are right behind. I love how they bring depth to a design with a rugged fussiness,” Amy pointed out the metal awnings. 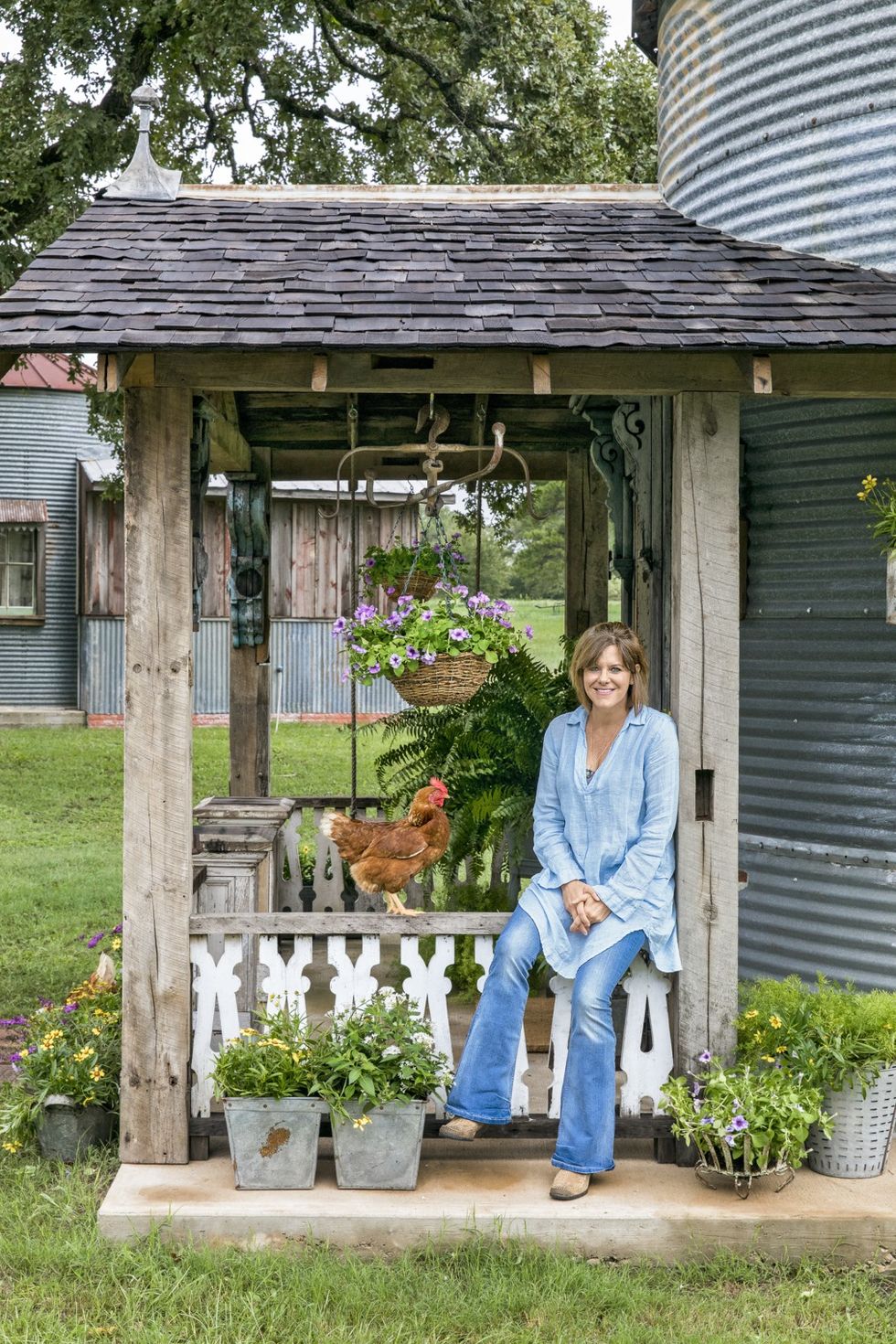 “Intricately carved window and door headers are my go-to when I want to define a space or embellish without having to hang artwork,” Amy said about her love for ornate headers.