A Time Before Kitchens – The Evolution of the City Scullery

There was a time when kitchens in cities were a rarity. We think of them as vital today, but in the class-based world of the past the kitchen was often reserved for the very wealthy and even then only in some cases. City living has always been a struggle for space versus amenities, even in historical times when cooking was laborious and convenience foods were non-existent. The evolution of the modern kitchen has taken a long and winding path, sometimes resulting in strange or cramped layouts. 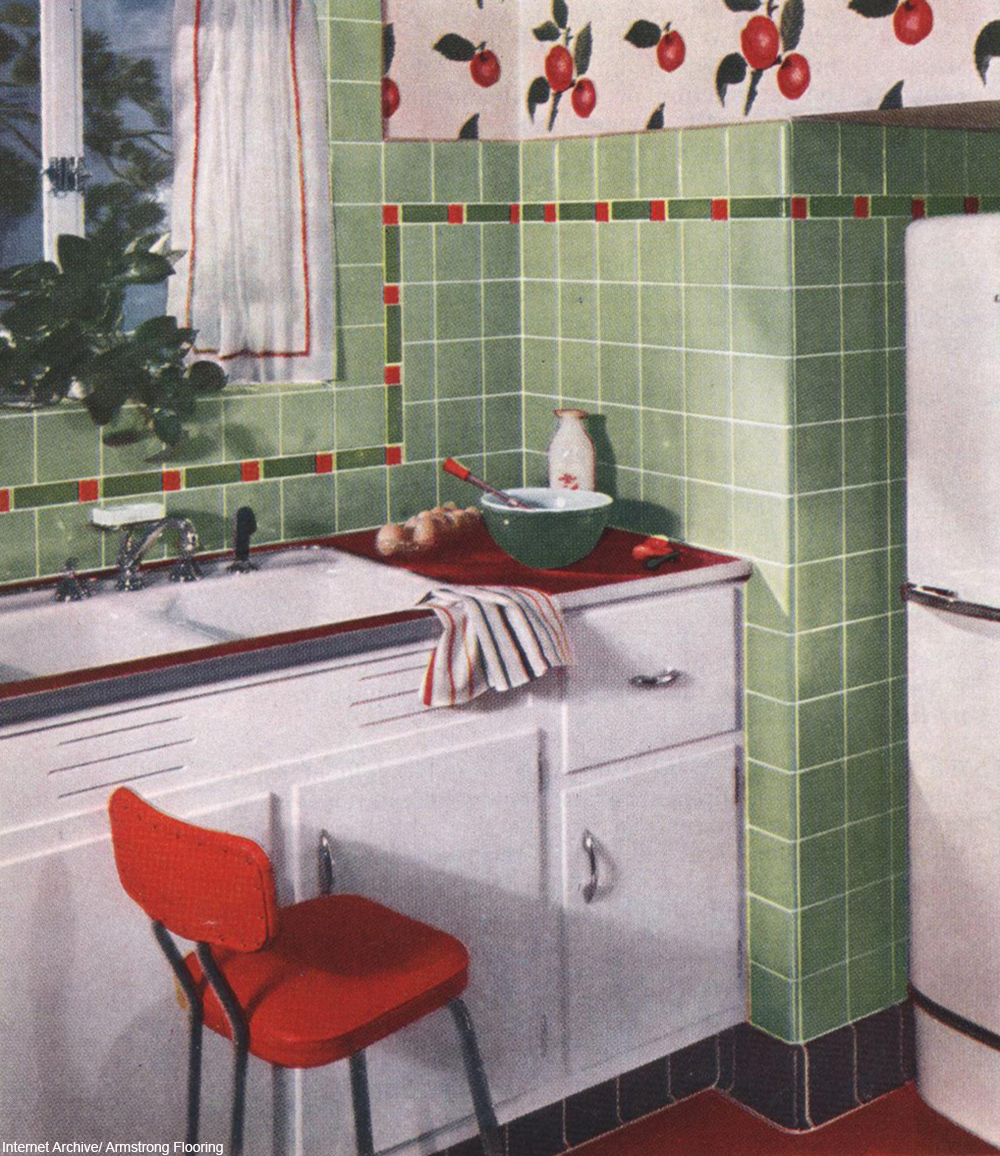 The idea of amenities today seems pretty standard, but in the past they varied wildly from one location to the next. Even as running water became normal, there weren’t health codes that mandated it be installed. Bathrooms, bathtubs, and sinks were not guaranteed with a new lease. Likewise kitchens were not a given for the middle and lower classes. Even wood stoves, the all-crucial element of heating, cooking, baking, and hygiene in the 19th century, were not always included. 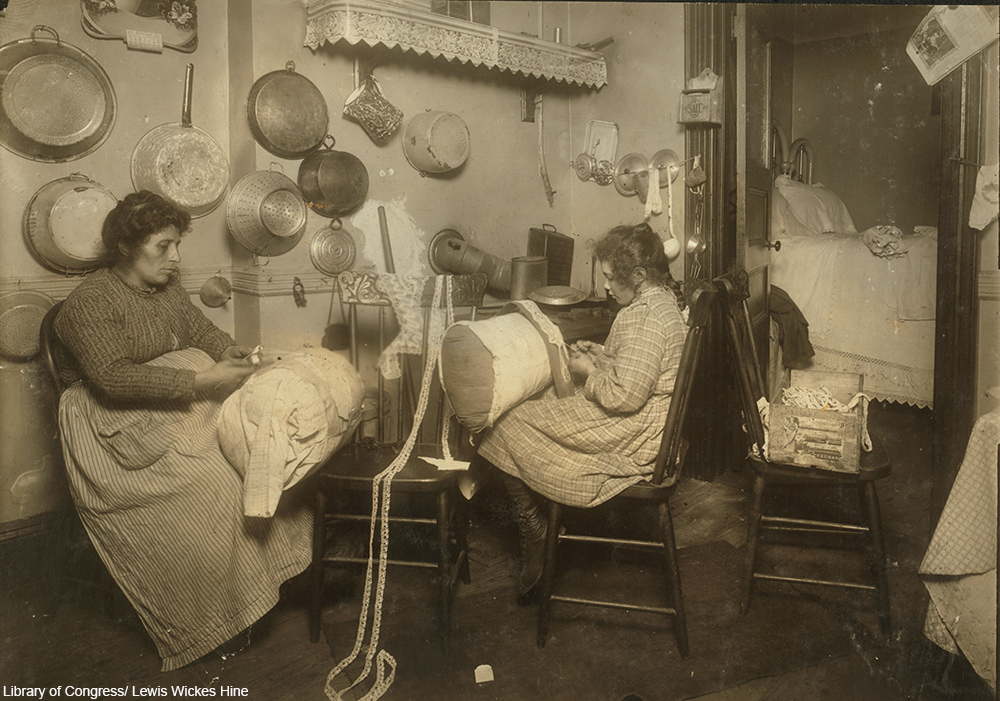 Lacemaking in the 1910s in the kitchen – no sink and only one shelf included. Via/ Library of Congress

People sometimes lugged around their precious stove from dwelling to dwelling because a poor family might expect to move into one or two room apartments, with no appointed space for a kitchen at all. This is one of the many reasons why the Hoosier cabinet was so popular – it was like a sort of portable kitchenette because you never could depend on cabinets, bins, or countertops at a new place. Even farm kitchens didn’t usually have built-in cabinetry.

The idea lingered that the poor didn’t deserve what we consider today to be “the basics” and had to work harder in order to achieve any kind of functional space. 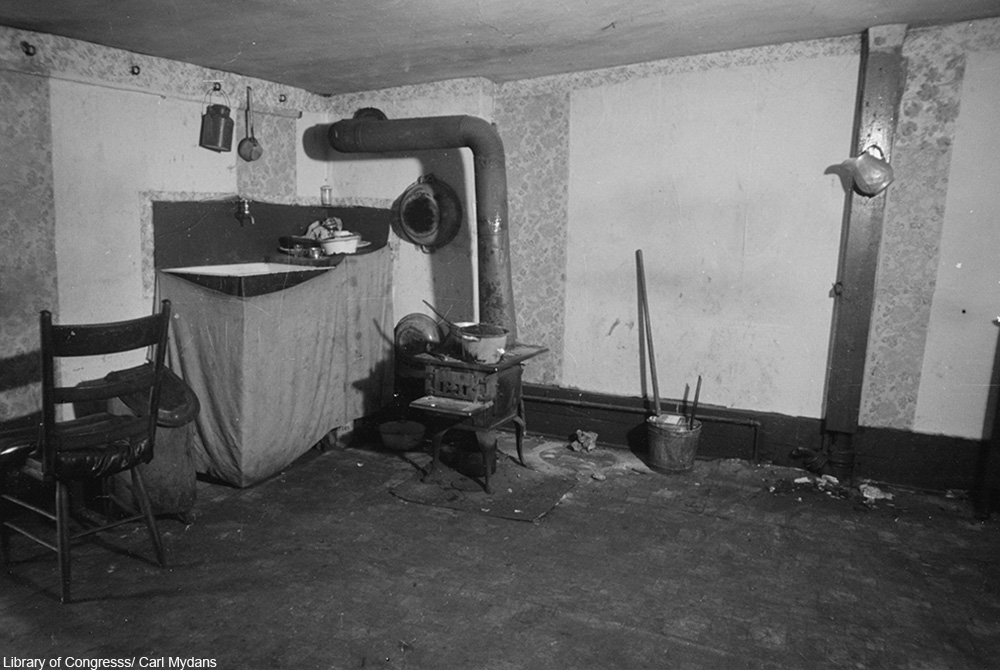 Tenement kitchen in the 1930s. This space at least had a sink. Via/ Library of Congress

Upscale city apartments sometimes didn’t include kitchens either. In fact many of the hotel-style apartments would have a main kitchen and residents would simply order food to be brought up. They didn’t know how to cook and didn’t need to employ scullery servants because it was taken care of for them.

It wasn’t until the 1930s-40s that thinking on kitchens began to change dramatically. Health standards and updates in infrastructure brought about by the New Deal meant that many tenement homes were demolished or remodeled to conform to a new standard of sanitation and comfort. Even those in poverty, the new mentality went, deserved running water and a place to make dinner.

At the same time developments in production and style meant the rise of the steel kitchen. Sleek, modular (and best of all) cheap, the idea of a contained, sparkling kitchen with steel appliances and cabinets soon became one of the ideal kitchens. Concealed storage was something that even wealthy households didn’t even have. 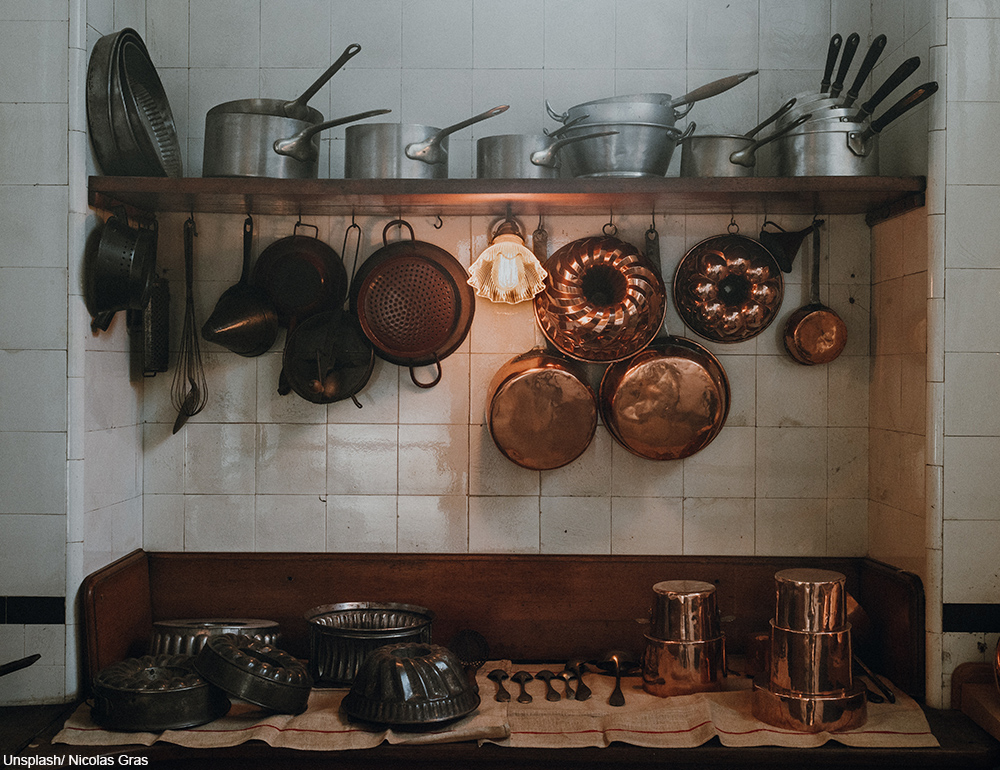 For centuries large and important households had used hired help to do the cooking, and their kitchens usually contained a lot of open storage. With plenty of servants on hand to clean, no one minded if the contents of kitchen got a little dusty or grimey: there was always someone there to clean it all up.

Aside from that the professional cook would have needed all their tools at easy reach. They also didn’t have to worry about entertaining anyone in the space, so concealed storage was at a minimum. But, this would not do for the modern household, working class or otherwise. 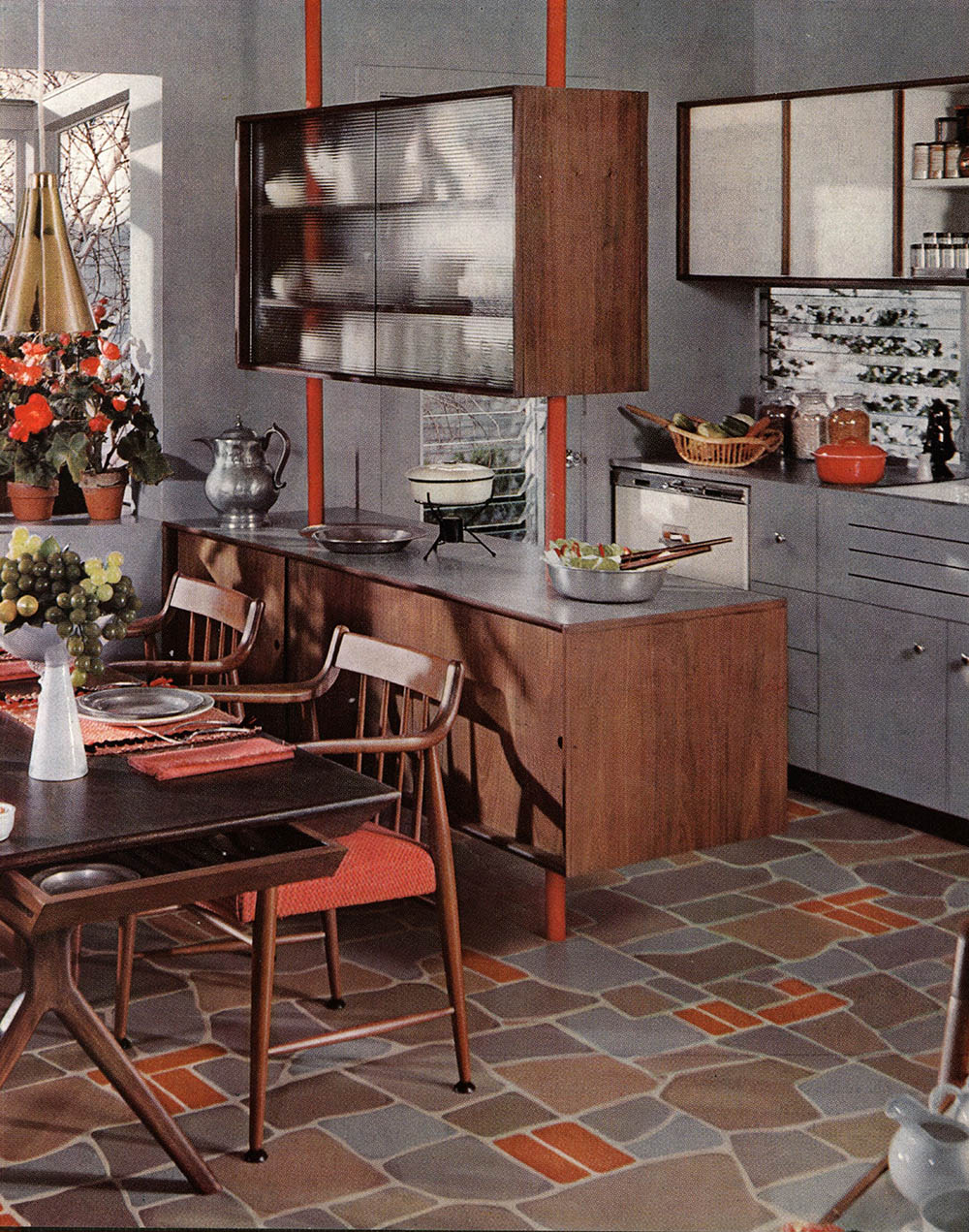 Modern kitchens were sold as chic, stylish, sanitary, and necessary. The real drive to sell the new type of kitchen came after World War II when new homes featured efficient kitchens ready for the lifelong work of raising children and cooking just about every meal at home. Smaller apartment kitchens modeled after the “Frankfurt kitchen” may not have been the center of the home due to lack of eat-in space. But, they certainly offered a level of convenience and cleanliness never before seen in apartment kitchens. 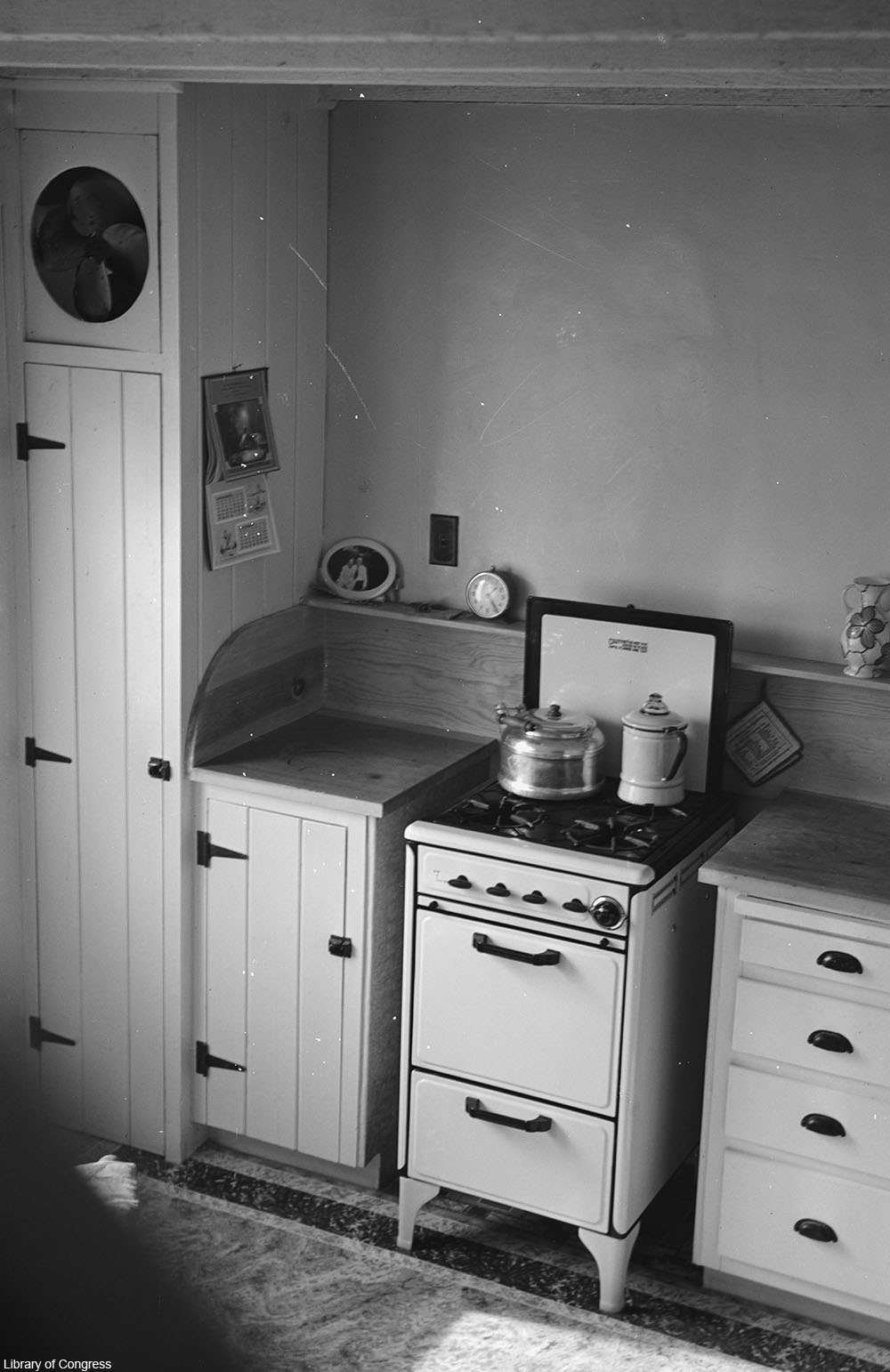 New style 1936 apartment kitchen with an exhaust fan, a pantry, and fresh linoleum flooring. Via/ Library of Congress

This suburban lifestyle, and the beautiful kitchens that went with, were soon the envy of city-dwellers, who had been dealing with subpar kitchens for years. The move to modernize apartments meant that people were suddenly trying to cram a full kitchen of functionality into some pretty small spaces. And, this is the reason why so many kitchens in older apartments can be quite frustrating or odd. 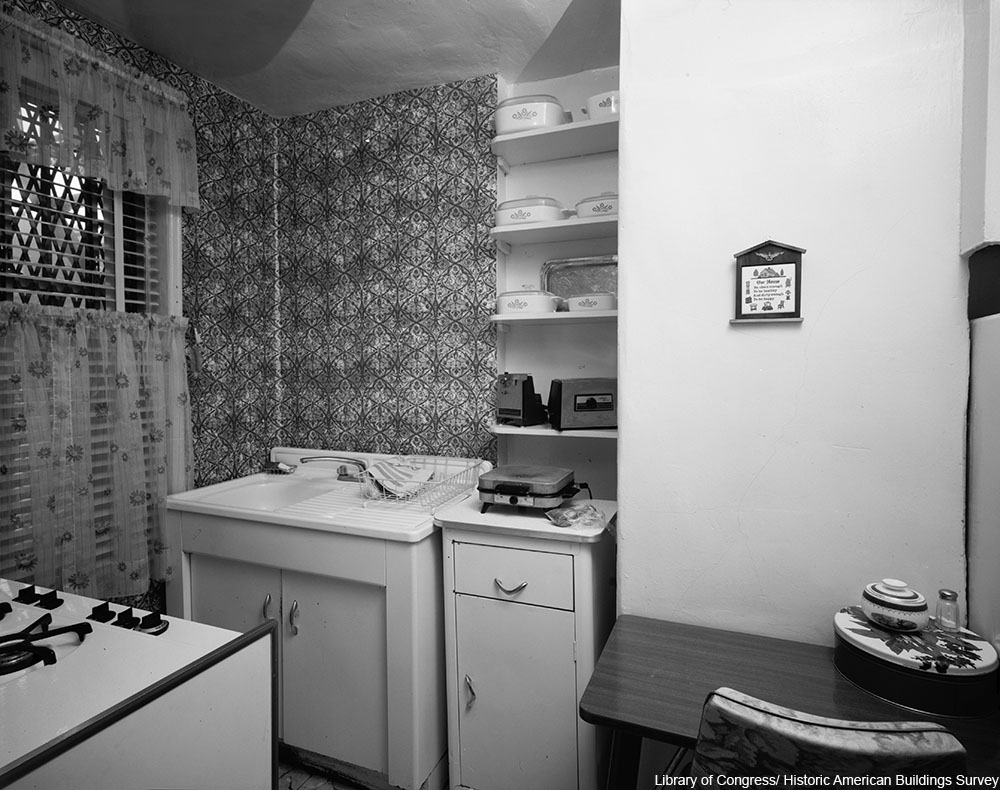 Today the kitchen is so important that even new-construction studio apartments no bigger than a suburban living room often include full kitchens. How times have changed!