It’s a great motivator. Anyone who grew up Catholic and went to a Catholic school knows quite well – shame is a great tool to keep people in line. The lapsed Catholic in me only feels 65% guilty for joking about that.

Shame actually doesn’t always work to get people to do what you want. Sometimes, it actually encourages them to continue the bad behavior you want them to stop.

And that is exactly what one Canadian grocery store discovered in their attempt to get people to stop using single plastic bags and switch over to reusable shopping bags instead. 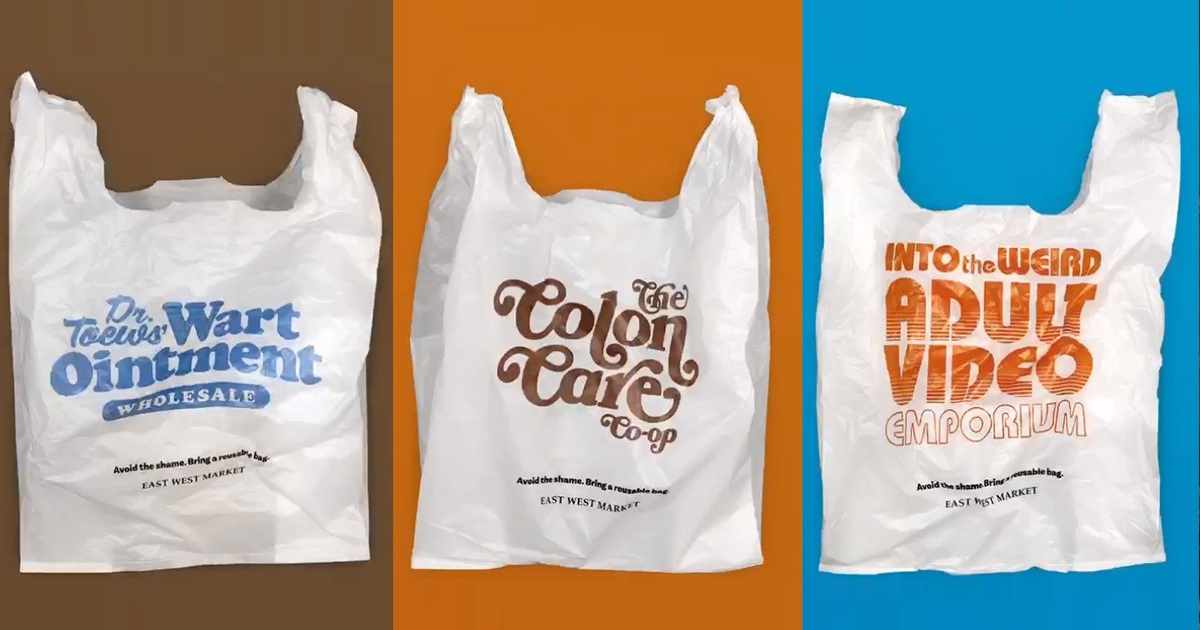 For those shoppers who didn’t bring reusable bags to the East West Market located Vancouver, British Columbia, they got to leave with their groceries packed in some pretty embarrassing bags. And some of the bags had some pretty interesting things written on them like, “Wart Ointment Wholesale,” “Into the Weird Adult Video Emporium” or “The Colon Care Co-Op.”

Store owner David Kwen wanted the bags to bring more awareness to the need to reduce plastic consumption and be more environmentally sustainable – but in a humorous way.

And that is how the eyebrow-raising slogan came to appear on the bags. As Kwen told Robin Young for Here & Now, he assumed that people would be too embarrassed to be seen carrying around those bags.

In an Instagram post the grocery store wrote, “It’s hard to always remember a reusable bag. We redesigned our plastic bags to help you never forget again!”

However, what was a good intention actually backfired pretty hard.

Soon, people were flocking to the market, specifically wanting to pay 5 cents per bag, hoping to collect all the designs.

The bags were meant to force customers to avoid forgetting their reusable totes. There was even text on the plastic bags that said, “Avoid the shame. Bring a reusable bag.” However, despite this setback, Kwen wasn’t defeated by the attention his plan was receiving.

“The underlying thing is that it creates conversation, and that’s what we actually wanted to get across to the general public,” Kwen said.

Hot on the trail of the plastic bag popularity, Kwen decided to capitalize on it and bring in a new eco-friendly twist. Soon, the East West Market will be selling canvas tote bags with the same humorous sayings on the front.

And Kwen is helping to promote the sustainability message at a good time. At this point in time, less than 10% of all plastic used in Canada gets recycled! That means that without a change, by the year 2030, Canadians will have annually thrown away an estimated $8.3 billion worth of plastic materials! Holy tamale, Canada. Seriously? But it is a good thing that they are now going to follow in the footsteps of the European Union, as Prime Minister Justin Trudeau announced in early June that Canada will begin banning single-use plastics as early as 2021.

Kwen is doing his part as an environmentally-conscious business owner, and he strongly believes in using humor as a way of driving home his point.

Kwen said, “If you talk to people in a nice, humorous way, I think they listen.”
That is so true.

As my spirit animal, Oscar Wilde once said, “If you want to tell people the truth, make them laugh, otherwise they’ll kill you.”