Christmas decorations provide us with the chance to show off our more creative side. They also give us the chance to put our Christmas spirit on full display. However, there are others who are not going to be as amused by our over the top displays. For example, there are some neighbors who are going to take these displays as a form of competition.

That is not what the Christmas spirit is all about, though. It is not about competing. That’s what makes this neighbor’s response such a hilarious one. They were not about to engage in some sort of decorative war. This neighbor’s reply is one for the ages and you are not going to believe your eyes. We do not wish to spoil it for you but we are afraid that we have no choice.

It is just that funny! Instead of allowing themselves to be one-upped, these neighbors turned the tables completely. This story takes place near Adelaide, South Australia. While this location isn’t always considered as a hotbed of Christmas cheer, perhaps it is time for that perception to change. Australians can get into the Christmas spirit just as well as their American counterparts.

Instead of trying to match this Christmas display, these neighbors came up with the perfect solution. As the old saying goes, if you cannot beat them……it is time to join them. They elected to piggyback onto their neighbor’s display in the most hilarious way possible. They did not head to the store and search for the best and brightest lights. 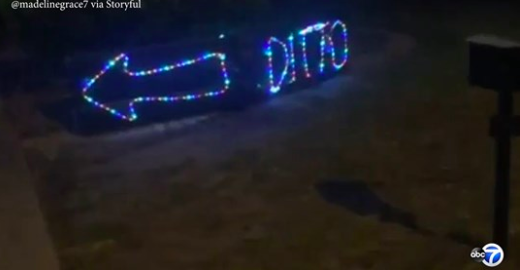 They did the next best thing: spelled out “DITTO” in the brightest lights and pointed an arrow at their neighbor’s house. We wonder how they felt the first time that they saw this. Hopefully, they had a good sense of humor about the whole thing. Christmastime is not the time to be a sourpuss. This sign has to be seen to be believed, though.

Be sure to pass it along to the Christmas lovers in your life. Even those who are looking to create their own incredible displays will want to see this for themselves. This is the sort of story that no one is going to believe until you have taken the time to show it to them. At the moment, we are going to do our absolute best to try to hold it together. It is so hard to see this sign and not immediately bust out laughing!