If You Ask A Stupid Question At This Diner, They’ll Charge You For It

There isn’t anything more annoying than when someone asks a stupid question. Now I know you think I’m being harsh right now, but I’m talking about a really stupid question that even the asker wishes they could take back. One diner in Colorado seems to feel the same way as me and is charging people for asking dumb questions.

A customer supposedly got charged for asking a “stupid question” while eating at Tom’s Diner. The receipt he uploaded to Reddit includes a chicken tenders basket for $9, a side of mashed potatoes for $2.99…and one stupid question for $.38. 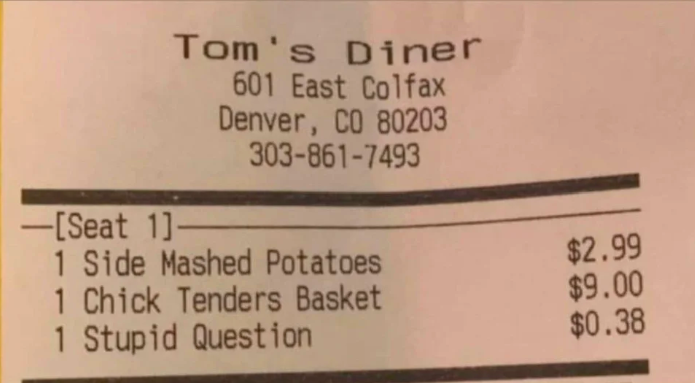 It is so odd that they decided to charge only $.38 cents but it is such a specific number so you would think that they put a lot of thought into it. The reality is that it can go unnoticed and add up quickly considering how many questions waiters are asked on a daily basis from customers.

People had a heyday in the comments section:

“They charge you 38 cents? Sh*t, if I charged for every stupid question I was asked, I’d be f*ckin rich,” one user wrote.

One user who claims to have worked as a line cook at the diner in 2018 clarified that servers didn’t actually put the “stupid question” side order on the bill unless a customer asked for it: “It was on the menu for entertainment value. A lot of times, customers would be disappointed at not being charged for asking a stupid question, so they’d ask and a server would then add it,” the employee wrote.