Big cities that have been around for years usually have many layers and secrets to them. Abroad you have cities like Rome and Paris that are home to catacombs and tunnels which spark the imaginations of any horror enthusiasts. Closer to home in the US there are modern cities full of secrets. Infamously, New York’s underground subway system is so vast that there are loads of tunnels still waiting to be explored. Other cities like Chicago, Los Angeles, Boston, and Dallas all have their own networks of underground tunnels too. However, there is a place in Easter Europe that the gold medal in terms of forgotten underground passages. That place is an underground city called Derinkuyu. 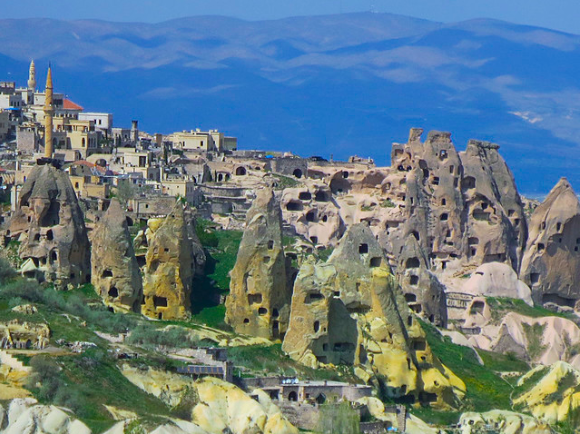 The subterranean suburb was rediscovered in 1963 as construction crews were renovating a house. One of the workers was using their sledgehammer on a soft, stone wall that crumbled away and revealed a large passageway that snaked off into the unknown darkness. It’s the true story of how the world became reacquainted with the undercity at Derinkuyu. While those workers knew they’d found something special, they were unaware of just how monumental their discovery really was.

Derinkuyu was truly a massively impressive place to live back in its day. The city spans 250 underground an estimated 18 distinct levels to it. Derinkuyu had enough spaced to contain within it, 20,000 people, complete with all of the necessities (and a few luxuries) — freshwater, stables, places of worship, as well as wineries and oil presses. Derinkuyu isn’t the only underground city to be discovered in the area of Cappadocia, but it’s the deepest one we know of, as well as believed to be the largest one too. Although another recently discovered location may have Derinkuyu beat in terms of population. 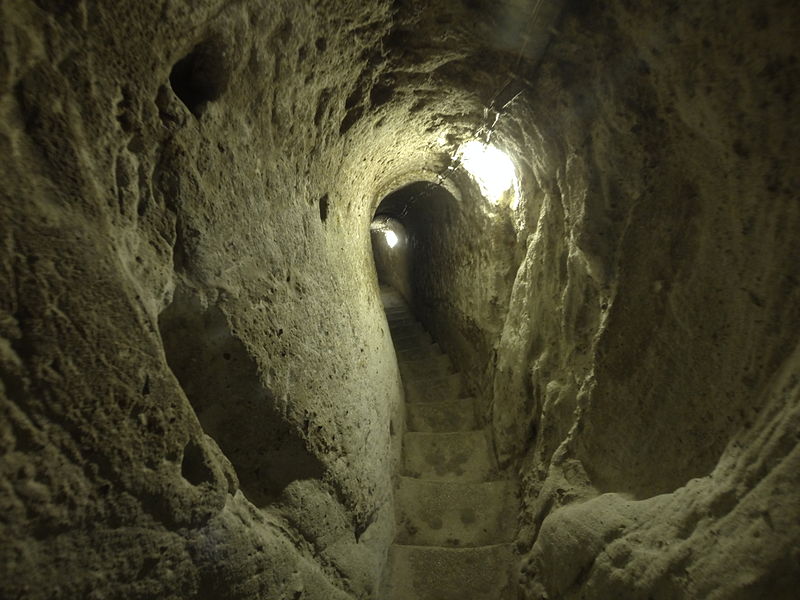 Derinkuyu and the other roughly 40 underground cities in the nearby area were all made possible due to the prevalence of tuff – which is a kind of volcanic rock that solidifies into something soft and crumbly. Tuff makes it pretty easy to carve out enormous subterranean passages from the earth. But the question as to why people would want to go through the effort of living underground lies in the origins of Derinkuyu.

While Derinkuyu isn’t in an area that is inhospitable to human life, people who built it didn’t want to hide from the sun or anything like that – instead, they wanted to hide from invading forces. There were massive, rolling stone doors which could block off each floor in the event that invaders were able to breach the fortress. But who were these invaders? To answer that question, we first have to answer who the people of Derinkuyu were in the first place. 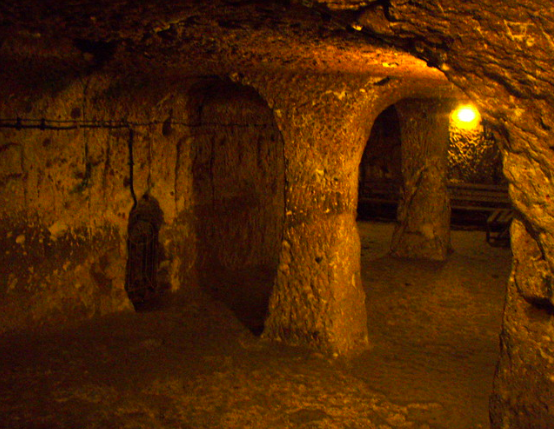 About 3 millennia ago, the earliest known people to live in the area were the Hittites – a people who ruled the Turkish Peninsula from about the 17th to 13th centuries B.C.E. Some scholars point out that some of the artifacts found, contained Hittite cultural elements, such as a small statue of a lion, found in one of the underground caves. If the people living in the caves were Hittites then that would suggest they were seeking shelter from invading Thracians.

However, they may not have been there forever as there is suggesting evidence that a tribe of Thracians, also know as Phrygians, were next to conquer the area. It is even possible that the Hittites never went underground, however, there is an alternative theory that suggests it was actually the Phrygians and not the Hittites, who constructed the underground city. Since the construction of Derinkuyu, there are many of the large underground complexes that date back to between the 10th and 7th centuries B.C.E. It is believed the Phrygians lived there until the 6th century B.C.E. and because of that, they’re generally believed to have created the first caves. Therefore, they may have been hiding from the Persian army under Cyrus the Great, who did take over the region, eventually. 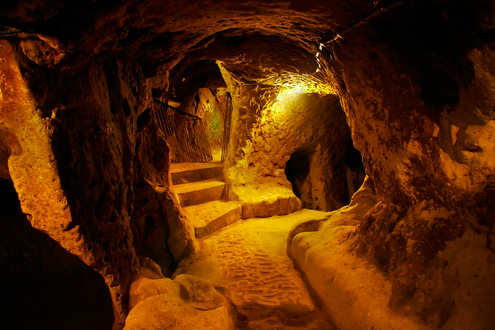 The invading Persians would have used the underground system as well. According to some sources, early Christians around the 2nd century C.E. eventually took hold of the caves as a way of escaping Roman persecution. This continued and in fact, Greek Christians were still using the caves up until 1923. From ancient times until now the caves had been forgotten for roughly 40 years until they were rediscovered. 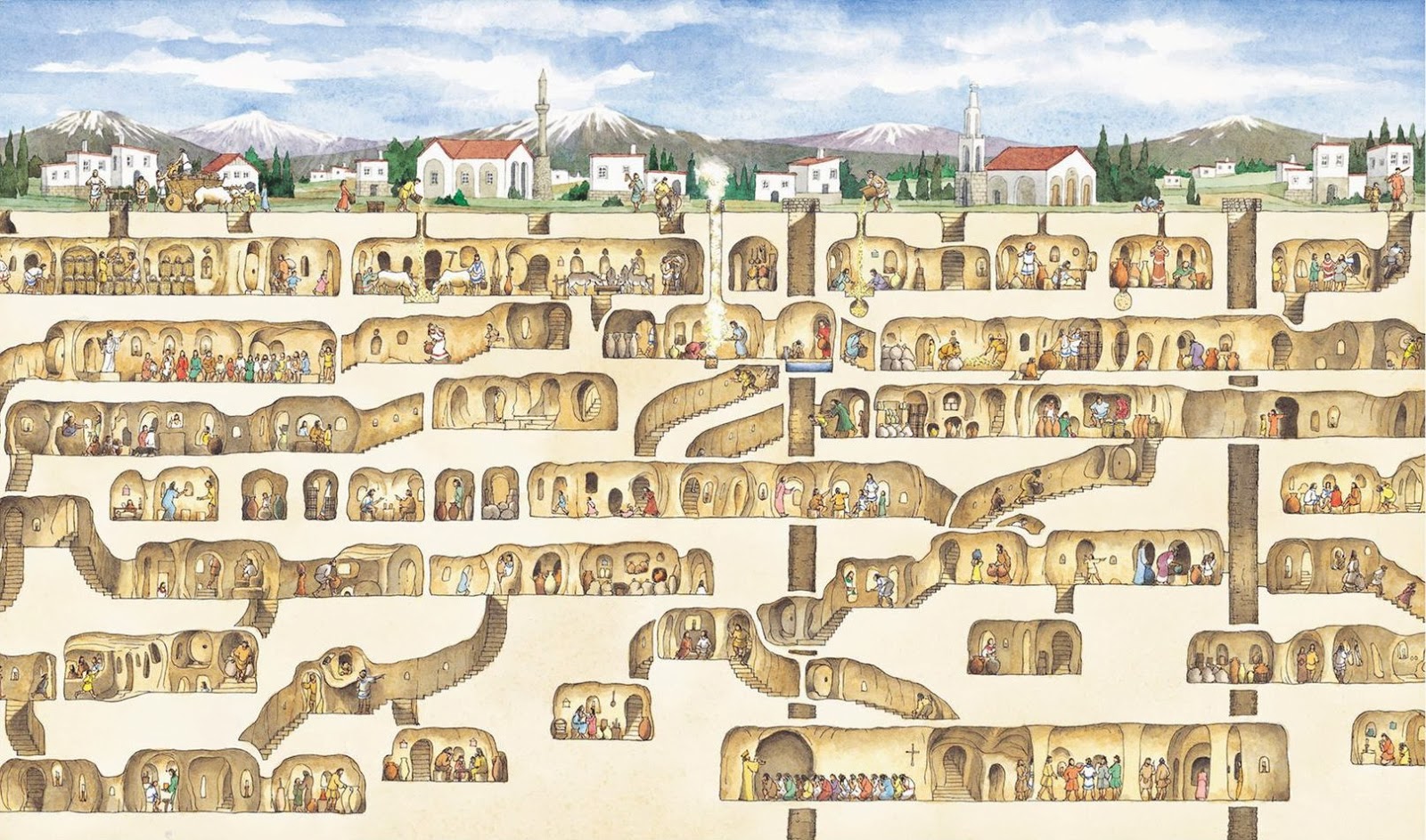 While it’s not likely that the caves themselves were forgotten about with time, the complexity of them certainly was. But while holes and other artifacts would have been visible on the surface, it’s likely the people living in the modern world wouldn’t have been able to fully comprehend their depth.