The Weird Plague That Made Everyone Dance Themselves To Death

It’s no secret that Medieval Europe was prone to deadly diseases that obliterated large portions of the population in the blink of an eye. When you think of plagues, you probably think of the Black Death. Yes, this was the most devastating plague to hit Europe, and it wiped out about a third of the population during the three years it ran rampant, but there’s another plague you might not be aware of. The Dancing Plague.

Origins Of The Dancing Plague 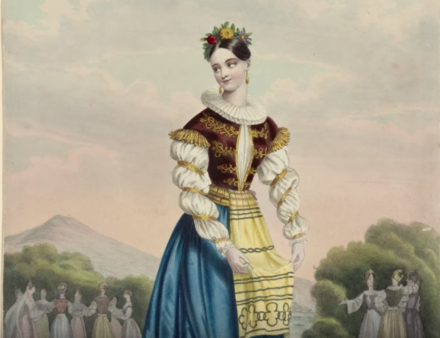 It all began in Strasbourg, a tiny town on the border of France and Germany in 1518. German housewife, Frau Troffea, stepped out of her house on a hot July day and started dancing to a tune no one else could hear. Her husband was not impressed, to say the least. Frau Troffea ceased her dancing for a few brief hours for a restless night of sleep, and then she was back at it in the morning, dancing until her feet were bloody. A crowd formed around the woman they assumed to be insane. Soon, however, they were dancing right along with her. The mass of dancers grew from a dozen to a few dozen, and eventually exploded into a mob of mad dancers that numbered around 400! 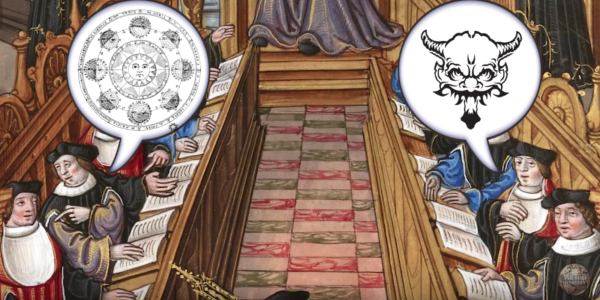 The town council had no idea how to handle such an odd epidemic, but one thing was clear; the dancers were not doing this for fun. No, the mass of people were screaming in pain and agony, begging for mercy from whatever strange force compelled them to dance non-stop. It was so bad that around 15 people a day collapsed in the streets, dead from dancing so long. The council met with all sorts of specialists from physicians to spiritual advisors. After ruling out astrological causes and demonic causes, the physicians had an official diagnosis: Hot Blood. 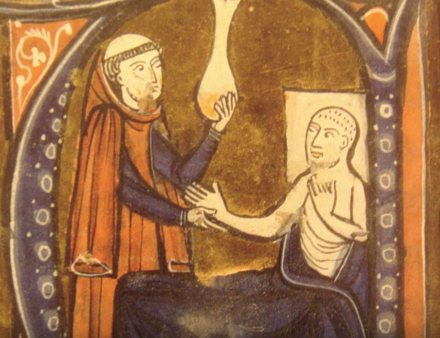 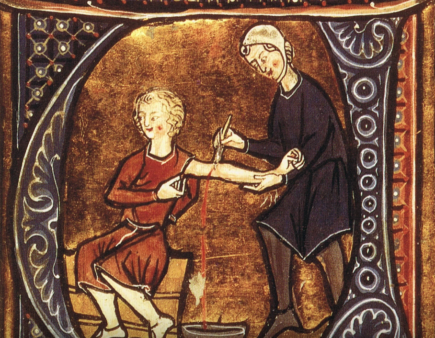 Hot Blood, according to the physicians, occurred when there was an imbalance in a person’s humors. The humors refer to the common theory handed down by Greek philosophers stating that the body was made up of four liquids – Choleric (yellow bile), Melancholic (black bile), Sanguine (blood), and Phlegmatic (phlegm). In the case of the dancing plague, physicians stated that it was a case of excess blood, which causes the brain to overheat, in turn making a person mad. Can you guess what the treatment was? Well, it was the 1500s, so bloodletting was the go-to cure-all. However, the doctors ran into complications, seeing as the people dancing seemed physically unable to stop moving, therefore making it next to impossible to perform bloodletting. 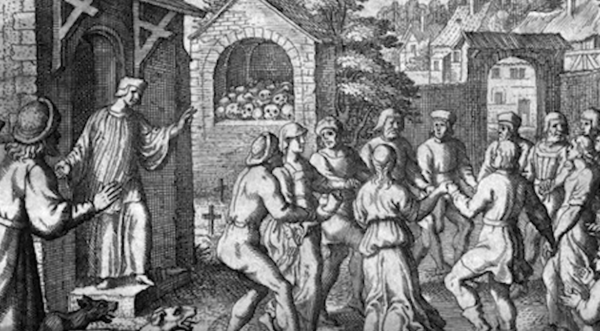 In a shocking move, the doctors actually prescribed more dancing, even hiring skilled musicians to accompany the feverish dancers. Their thought was that they could “burn out” the dancers by letting them work it out of their systems. Unsurprisingly, this did not help. In fact, it exacerbated the issue. The musicians sped up the tempo, causing the dancers to move faster and more frantically, thus ultimately causing more deaths. In fact, the music and dancing only served to draw more people into the town square, thinking it was a fun party instead of a weird, deadly trap. 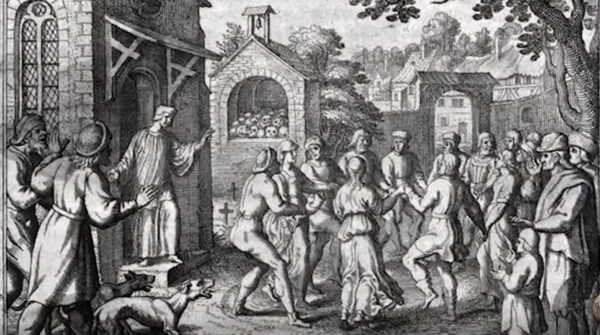 When the “cure” proved to be disastrous, the town council decided to change course. Obviously, the dancers weren’t physically ill. No, it was a curse sent by God to punish the small town for its wicked ways. They started by banning gambling and prostitution, as well as people who had a certain reputation around town. The people of Strasbourg even tried appeasing God and the saints by giving them a gift… A 100-pound candle, of course. What else would you give the saints who afflicted your town with a dancing fever? When that didn’t work, the town banned all dancing and music. 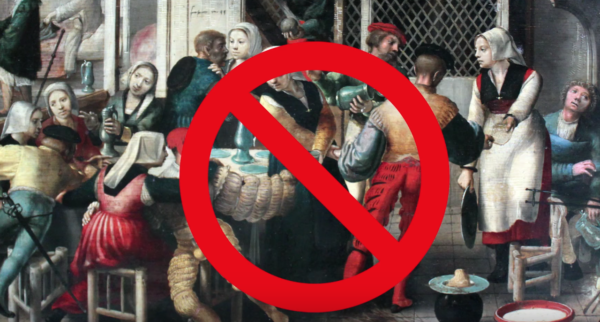 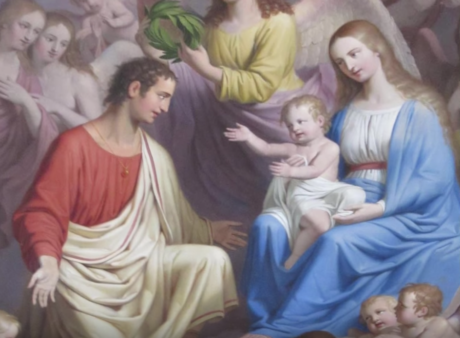 Ok, so maybe not “hail Mary,” more like “hail Saint Vitus,” but whatever. In a final attempt to rid the town of this dancing madness once and for all, the dancers were loaded into wagons and taken to a shrine of Saint Vitus. Saint Vitus was known to cure illnesses, especially those involving shaking limbs. Dancers fell onto the alter while priests said a mass over them and handed out little crosses. The dancers were also instructed to put on red, strappy shoes that were soaked in holy water. The red shoes apparently worked like a charm, and the dancing came to stop. The strange episode ended in September of 1518 and became known as St. Vitus’ Dance. 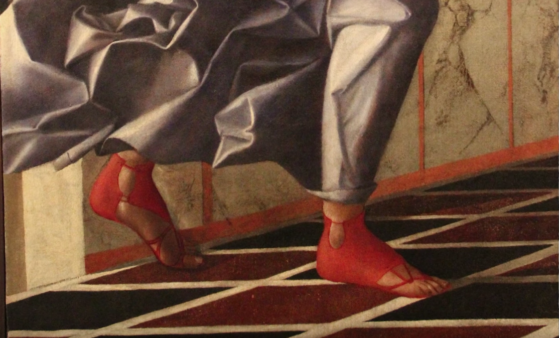 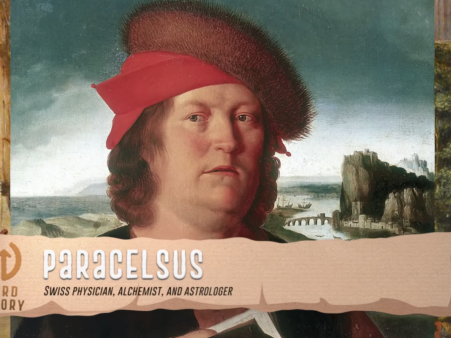 A decade after the bewildering dancing incident, Swiss physician and alchemist, Paracelsus, visited Strasbourg in an attempt to explore and explain the dancing phenomenon. He came to the conclusion that involuntary dancing was a natural reflex if certain parts of the body were manipulated. Then, he blamed women. Naturally. This is the 1500s, after all. Specifically, he speculated wildly about the first dancer, Frau Troffea, claiming she started dancing in order to avoid doing housework. It is unclear how this then translated into others joining in. 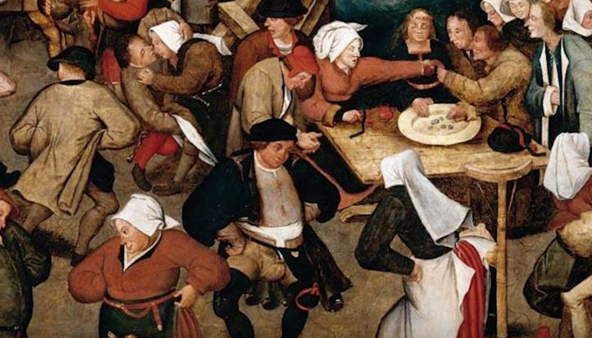 The Real Cause Of The Dancing Plague 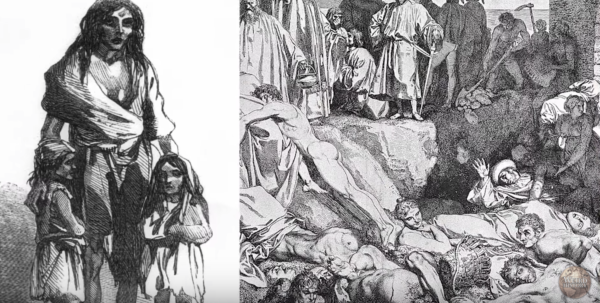 Experts still don’t agree on what exactly happened to cause the dancing epidemic of 1518, though the theories are fun to learn about. Some believe it was caused by grain poisoning that gave the symptoms of twitching limbs. This doesn’t explain how the movements were coordinated, however. Some say it was a case of group epilepsy… which isn’t really a thing. Plus, it doesn’t explain how the dancing became contagious, seeing as you can’t “catch” epilepsy. Another, more outlandish theory is that all of it was coordinated by a heretical cult that seemed to resurface every ten years or so to cause public displays of power.

The most widely accepted explanation is a good old fashioned case of mass hysteria. To give some context, the town of Strasbourg was having a rough… century. They were hit with 5 plagues over the last 100 years, which caused food prices to skyrocket. The fifth plague, which took place in 1517 (one year before the dance fever set in), killed tons of people within the small town. Not only was the famine fresh on everyone’s mind in 1518, but smallpox and leprosy were on the rise. Basically, everyone was afraid of dying at the hands of forces outside of their control, and the people of Strasbourg were primed for mass hysteria. The “cure” supports this theory, as there’s no real reason red shoes would suddenly physically heal anyone. 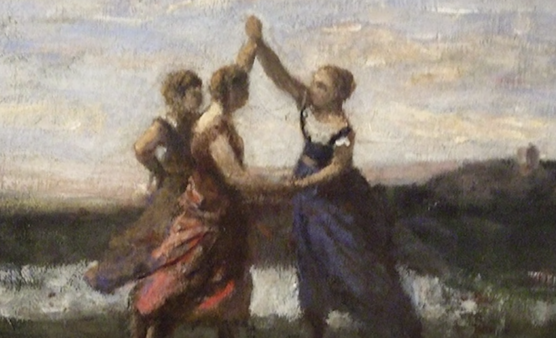 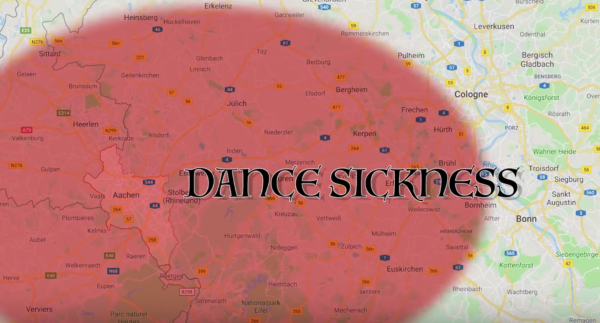 Believe it or not, but this wasn’t the first dancing plague to hit Europe. Almost 150 years earlier, in 1374, the German city of Aachen was hit with a similar dancing sickness that quickly spread throughout the Rhine Valley. This sickness was tamer than the dancing fever that overtook Strasbourg, as the people didn’t dance in a big mosh pit, but rather held hands and danced in a delirious circle until they fell on the ground in exhaustion. At the time, city officials claimed it was demonic possession. Their solution was to hose down the dancers with holy water and chant incantations in the faces of the dancers. This, too, seemed to miraculously “cure” the sickness, thus indicating another case of mass hysteria. 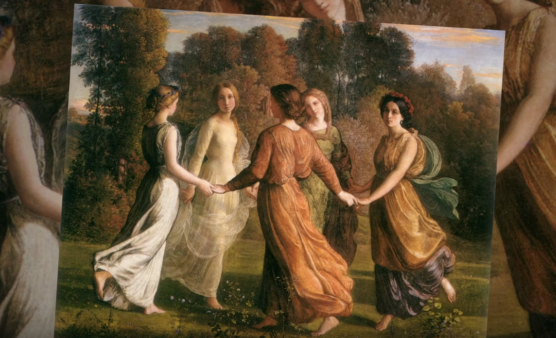 Find out more about this strange time in history by watching the video below!