Queen Elizabeth I has often been called the “Virgin Queen” – a moniker she evoked because she never married. Along with her status as an independent woman, she also famously wore loads of white lead makeup to conceal scars from smallpox. Nearly all portraits of the Queen show her in all her finery, with pale skin, rosy cheeks, and enough jewelry to anchor a small ship.

One of the most well known of these royal portraits is the 1588 Armada Portrait (painted after her defeat of the Spanish navy), one copy of which is displayed in the Queen’s House House Museum in Greenwich, England. But, in the same room as this exquisite portrait was displayed an unsettling mask of Queen on the opposite wall. 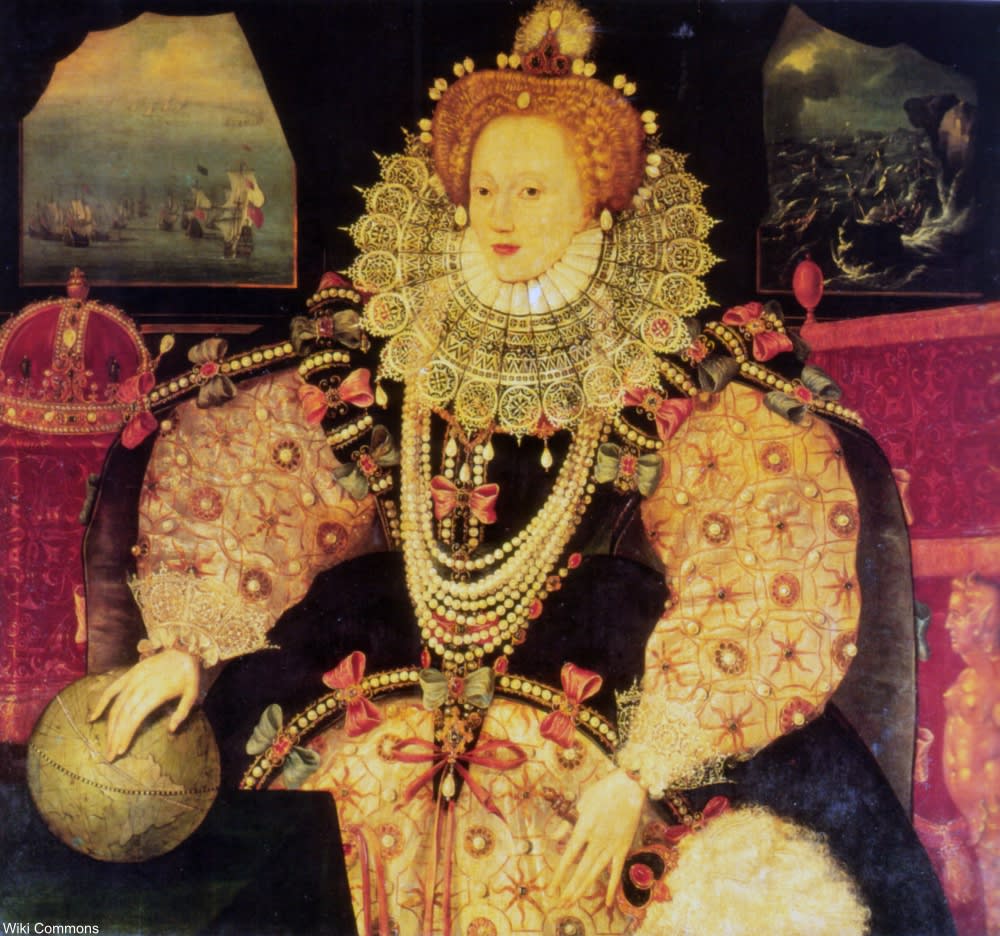 The animatronic mask is made to mimic Queen Elizabeth I’s face in every detail- from her smallpox scars to the chin hairs which a woman in her 50s (which was the the age of the Queen when she posed for the Armada Portrait) would have had. Flaws of the royalty were covered with makeup and were erased in royal portraits.

When a painting did not suit a member of royalty, it was simply thrown out and a new one commissioned. So, the paintings of the era are not necessarily a true image of subject. Seen below is a much more realistic painting of HRM from less than ten years before her 1605 death. 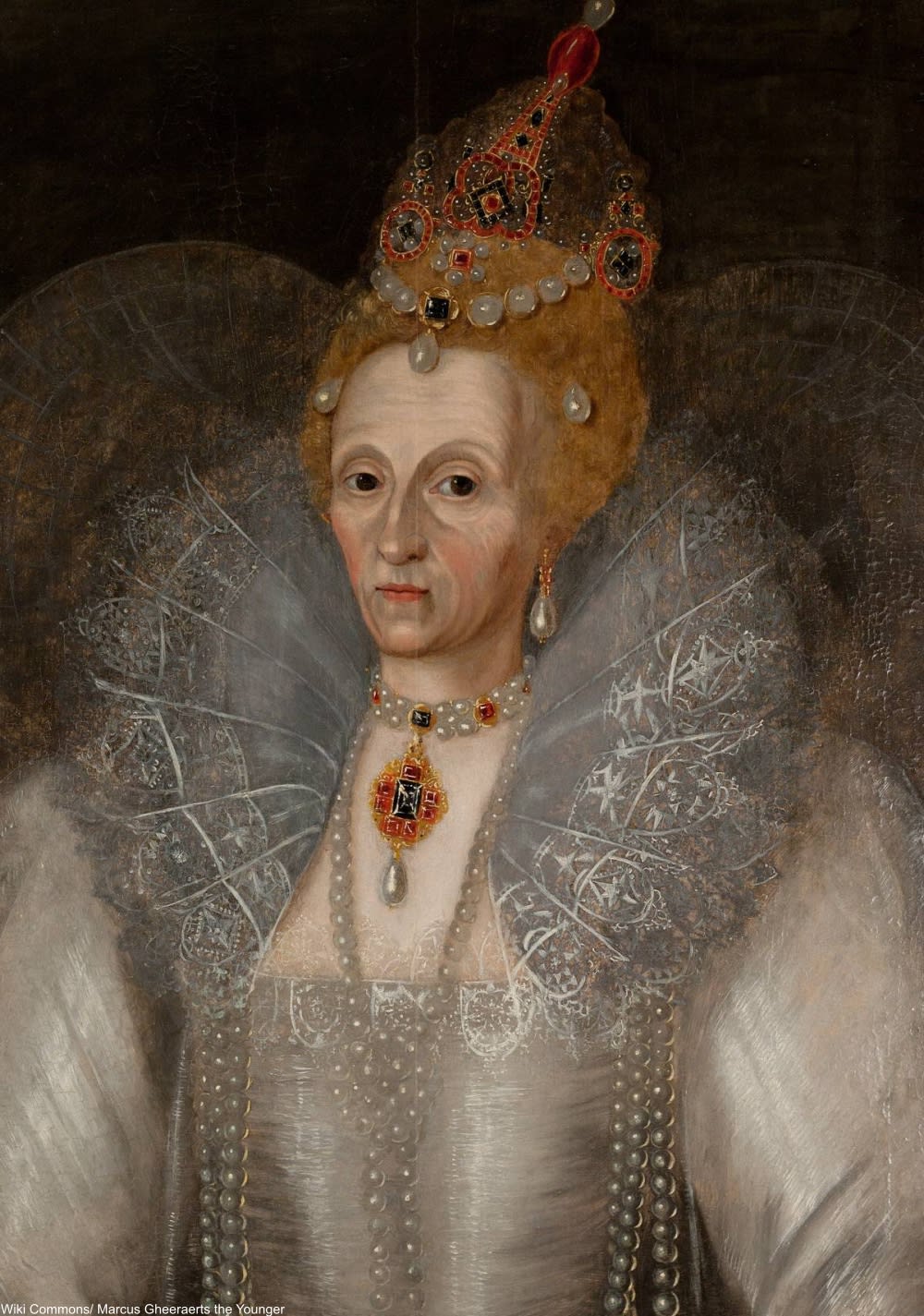 Mat Collishaw, the creator of the mobile mask, used all manner of source material to create the modern likeness of Queen Elizabeth I. The piece of art, which moves in a very realistic, and some would say creepy, way is entitled The Mask of Youth and serves as a much more realistic snapshot of Her Royal Majesty. The movements behind the mask were created using modern mechanics and features no hair, jewelry, or collars with which to distract the viewer. The silicone mask was set up with motion sensors to respond to visitors in a way which is unusual to say the least.

The Mask of Youth: The portrait of Queen Elizabeth 1 produced in 1588 during the Armada invasion was a depiction of her charisma, invulnerability and agelessness. She was 55 and childless at that time and yet she managed to wear the mask of strength and youth. In the animatronic mask, artist Mat Collinshaw tried to capture how Elizabeth might have looked like at the time when the Armada portrait was created. Looking at the two displayed against each other raises questions and inflicts curious revelations around the depiction of power in the Queen’s propaganda, the schism of power and the enigma of the Queen. #thequeensroom #greenwich #elizabeth1 #propaganda #maskofyouth #artist #painting #animatronics #monarch #hermajesty #queenofengland #power #authority #portrait #history #armada #traveller #travelblogger #travelphotography #travelstories #explorer #globetrotter #instagood

The Mask of Youth at the Queen’s House in Greenwich is very interesting although dare I say a little creepy?! #maskofyouth #greenwich #queen’shouse

The Mask of Youth does not show the potential damage from years of lead-based makeup use, nor does it show the possibly rotten teeth from Queen Elizabeth’s notorious sugar cravings. However, it’s still a far cry from the royal portraits which showed only what was intended. The mask was on display up until February of 2019. See it in action in the video below and decide for yourself whether this piece of art is unsettling or not.

Wait for it #armadaportrait #maskofyouth by @matcollishaw The Armada Portrait commemorates the most famous conflict of Elizabeth’s reign (1558–1603), the Spanish Armada’s failed attempt to invade England in July and August 1588. Despite being painted shortly after the invasion when the Queen was almost fifty-five, the painting depicts a woman who looks considerably younger. Inspired by this idealised image of the Tudor Queen, Collishaw has collaborated with leading special effects designers using cutting-edge technology to create a stand-alone animatronic mask which approximates Elizabeth’s appearance at the age of the portrait’s creation.

The crazy (and dangerous) things people used to regularly wear: Click “Next Page” below!