Costco Joins Other Stores In Having A Special Senior Shopping Hour

On Saturday, March 21st, Costco stepped up and joined other stores in creating a special shopping hour for seniors. In their announcement on Facebook, Costco said their doors would be open only for customers 60 and above on Tuesdays and Thursdays from 8 a.m. to 9 a.m., starting Tuesday, March 24th.

The big box store also said they wouldn’t be accepting returns on toilet paper, paper towels, sanitizing wipes, water, rice, and Lysol. It’s unclear why someone would return these items, but it’s an interesting rule nonetheless. According to Business Insider, one employee at an Illinois Costco said that the restriction is for sanitary purposes, as Costco cannot resell these items after they have left the building. 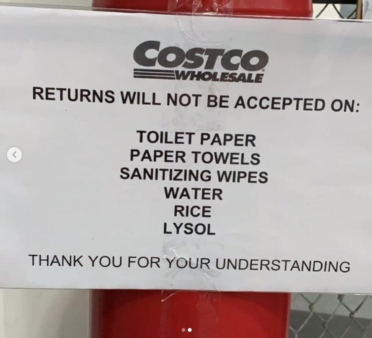 Craig Jelinek, the president and CEO of Costco Wholesale, said in a statement sent to customers on March 17th that they are experiencing a surge of business. “As a result, we’ve taken steps to control the number of members in our warehouses and asked that members and employees practice social distancing. We’ve also reduced some services.”

Need to find a Costco near you? Use this tool to locate the nearest store!

Albertsons: Tuesday and Thursday from 7 to 9 a.m

Big Lots: The first hour of each day

Dollar General: The first hour of every day

H-E-B: “Starting 3/20, seniors can place orders from curated list of essentials via a phone line, the Favor app, or at favordelivery.com/seniors. The line will be staffed with volunteers to accept/process home delivery orders via phone daily 9a-1p.”

Safeway: Tuesdays and Thursdays from open to 9 a.m.

Target: The first hour of every shopping day

Whole Foods: One hour before opening

See all of the stores, both local and international, that have special hours right here.