A woman in Pennsylvania decided to take a friendlier approach to her Halloween decorations by making her front entrance look like the Cookie Monster. Lisa Boll says that she did it to honor Sesame Street’s 50th anniversary.

According to CBS 3, Boll used blue spray paint on the vines surrounding the front entrance of her home since they resembled Cookie Monster’s face. She then added styrofoam eyes and placed a giant cookie in his mouth. 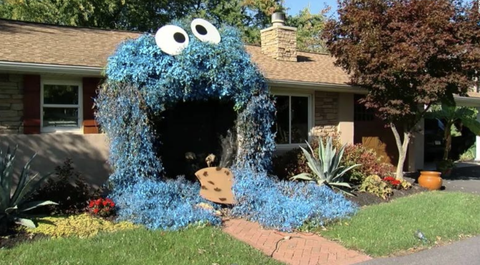 According to CNN, Boll says that she is happy with the way everything turned outdidn’t want to scare the children.

“It was surprising how many people get a big kick out of it, so it’s good, it’s fun for Halloween and it’s not a horror thing so it appeals to kids under the age of three, it’s not scary,” Boll told the network.

We really like the idea of some more family-friendly decorations that appeal to a younger generation that would otherwise run away in terror.