Ever since I was a young boy, my mother always told me to just keep my mouth shut if I didn’t have something nice to say. I think most people have heard the advice but for some, the advice didn’t stick.

Diana Rowland has a rather interesting tradition when the weather turns colder. Her front yard in Louisiana becomes home to inflatable dragons starting with Halloween.

Most people put out pumpkins but she wanted to do something unique. Since she started putting them out, she got many compliments so she decided to leave them up for Christmas.

She wanted to get more bang for her buck by leaving the dragons in the yard and putting a Santa hat or sparkly decorations on them.

It seems as if one of the neighbors wasn’t happy about what she did and they sent Diana a note. 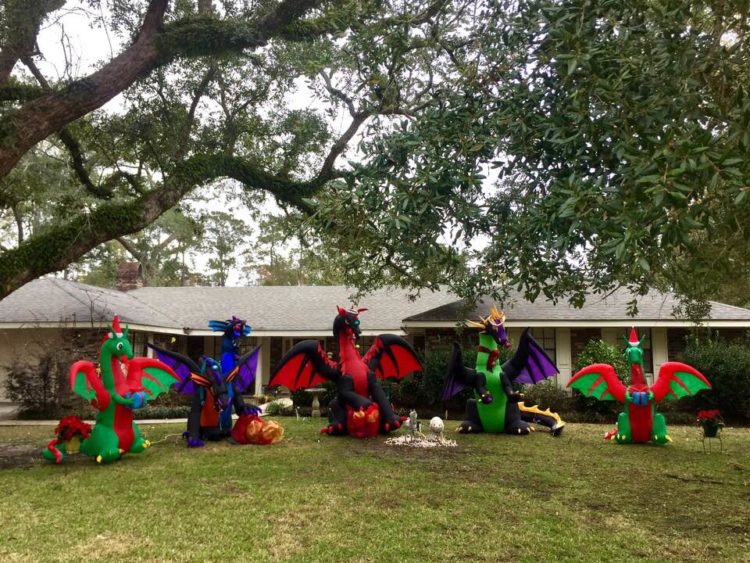 “Your dragon display is only marginally acceptable at Halloween. It is totally inappropriate at Christmas. It makes your neighbors wonder if you are involved in a demonic cult.”

She then requested kindly that the dragons are taken down, adding “May God bless you and help you to know the true meaning of Christmas.”

The note was sent anonymously.

Diana wasn’t offended but she did think it was funny.

“I did consider removing them for about a nanosecond, and then went, ‘Nope,’” she said.

Diane even decided to add two more dragons to the front yard display that had halos on their heads.

“In the spirit of neighborhood harmony, I have placed halos on the dragons. They are now angels. Ezekial 1:1-28. I’ll fight anyone who says different,” she posted on Twitter. 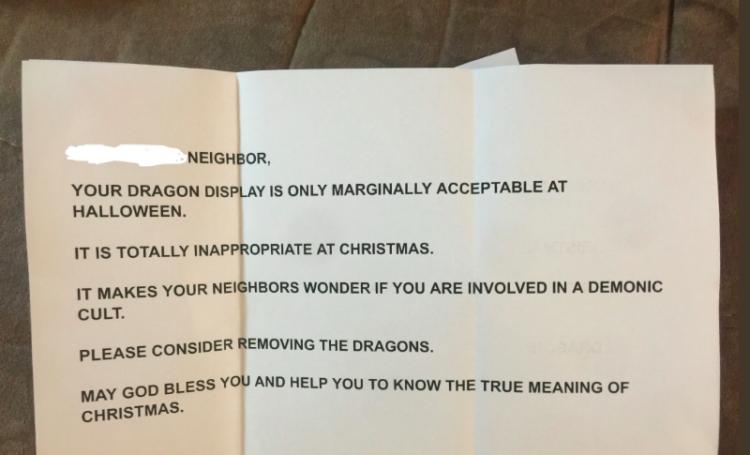 “It’s got more reactions than I ever expected,” she said. “I think this obviously resonated with a lot of people. I think there are a lot of people who have experiences with bad neighbors.”

A common response that Diana received was people asking if they could purchase additional dragons to fan the flames of the feud. Diana had some good points about this.

1. She told people to use the money and donate it to charity instead. “I make a good living. I can buy my own dragons,” she said. “Let’s make this holiday season about joy and charity for all.”

2. She didn’t want to completely mess with her neighbor. “There’s a line between getting back at a jerky neighbor and being a jerky neighbor,” Diana said. “Stand your ground, but don’t be an a**hole,” Rowland said.

She also said: “I think [the person who sent the note] misses the point about what Christmas is. Christmas is about joy. That’s what it boils down to.”